How odd is this economy? Two economic reports from last week, attempting to measure essentially the same thing, reported results that were so different they could be about two different countries. At 9:45 Wednesday morning, S&P Global reported their US Services PMI for July as 47.3 versus June’s 52.7, a sudden and large one-month drop. When they reported the preliminary number a couple of weeks ago I said that if confirmed, this is not good news for the US economy. Was it confirmed? Sort of.

Then at 10 AM Wednesday, ISM reported their Services (actually non-manufacturing) PMI survey. It rose to 56.7 in July from 55.3 in June; expectations, likely based on the S&P report, were for a fall. Production, new orders, and employment all improved while price pressures lessened. Inventories fell faster. The S&P final Services PMI confirmed the preliminary but the ISM certainly did not. Good news? Bad news?

So which one should we believe? There are differences in the two reports. The ISM report focuses on larger companies while the S&P version surveys a wider range of business sizes. On the other hand, the ISM report covers more industries. Both reports did show new orders rising and price pressures falling so there was good news in both reports. The S&P report also said confidence fell to a 22-month low but companies also expanded hiring and are still working through backlogs which seems a bit contradictory.

Most of the economic reports released last week tended to support the ISM view of an economy that is slowing but not in recession. ISM also released their manufacturing survey last week and it weakened slightly to 52.8 from 53. There was good news – prices fell from 78.5 to 60 and employment rose to 49.9 from 47.3 – and not so good news – new orders fell to 48 from 49.2. In other reports, job openings fell but remain high, mortgage applications rose, factory orders rose more than expected, core capital goods orders rose again and payrolls rose more than expected. Construction spending was down 1.1% in one of the few weak reports.

The employment report was much better than expected at a +528K jobs but I don’t think it was quite as good as the headline. The household report, as has been the case for several months, was not as strong as the establishment report and that is worrisome because we’ve seen this report flatten out ahead of recessions in the past. However, the number of unemployed is still falling and that usually reverses before the onset of recession. What worried me most was the increase in part-time employment for economic and non-economic reasons (+331k and +501k respectively). The level of the former is up about 200k this year but is also consistent with previous cycles’ lows. The latter is most likely people out because of the new COVID variants. The total impact on the economy from all these distortions? Your guess is as good as mine.

Regardless of how you or I viewed these reports, the market reacted by pushing both short and long-term rates higher. The 2-year Treasury yield rose 35 basis points while the 10-year rose 20 meaning that yield curve inverted more (41 basis points). On the other hand, the 3-month bill rate rose only 11 basis points so that curve steepened. More importantly, I think, was the reaction in the futures market. Prior to last week, the SOFR (LIBOR replacement) market put the peak in rates in the first quarter of next year. The action last week pushed that out to the second quarter and pushed the peak rate higher. The market seems to be saying that, with last week’s data, recession is further away.

The economic data right now is confusing and often contradictory. One services PMI positive, one negative. Factory orders strong but new orders in the manufacturing PMI under 50 (the dividing line between expansion and contraction). 528k new jobs but a surge in part-time work which is rising but consistent with previous cycle lows. Weekly jobless claims up 60k in the last 3 months but still less than the lowest recorded in every business cycle since the 1970s – except the last one. One yield curve inverting more and another one steepening.

In an environment like this, it is that much more important to pay attention to markets. Pundits have agendas and anyone talking confidently about where this economy is headed is probably selling something. Markets though are millions of individuals making independent choices and risking real capital. Markets offer the best view of the future we are likely to get.

But because they are composed of humans they aren’t infallible and alpha – return in excess of average – is made when they get things wrong. Achieving better than average investment results will require you to construct a portfolio that is different than the average investor. To do that, you need to know how investors are positioned, know what they are expecting, because at some point you are going to have to buck the consensus.

I look at the commitment of traders report every week and most of the time there are no extremes and it provides little information. Futures traders are trend followers and they usually shift positions with the market – the trend is your friend as the old saying goes. But sometimes positions get too popular, the trend outruns the fundamentals and all the speculators end up on the same side of the market. When that happens, a reversal, often violent, becomes much more likely.

Right now large speculators are short bonds, short stocks (especially small cap but also S&P 500), and long the dollar. The consensus, at least among these large speculators, is for higher rates, a higher dollar, and lower stocks. Of those, the most extreme is in stocks where the number of contracts sold short on the S&P 500 is the most since June 2020 (which was the most in the last 10 years). The short position in small-cap stocks is the most in the last 10 years by a wide margin.

The rising rate, rising dollar environment is intact. The 10-year Treasury rate is in a short-term downtrend but rates rose on the week as the economic data was deemed positive, particularly the employment report Friday. The short-term trend for the dollar is still up and on-trend but it is off about 2.4% from the high. Reversing the trend would require – likely – a convergence of growth expectations between the US and the rest of the world. It seems unlikely that that would happen with the rest of the world getting better but that shouldn’t be ruled out. Could there be a positive turn in the Ukraine war that relieves the pressure on European energy markets? I can’t handicap that but it isn’t out of the question.

The other way for growth expectations to converge would be for US growth/inflation/rate expectations to fall, a scenario that is basically consensus. Obviously, there are some signs of this but it hasn’t been enough to change the dollar’s direction.

Large-cap stocks squeaked out a gain last week but the big winners were growth stocks with small and mid-caps leading the way. Despite the very short term growth outperformance, the trend for value vs growth still favors value over an intermediate time frame. 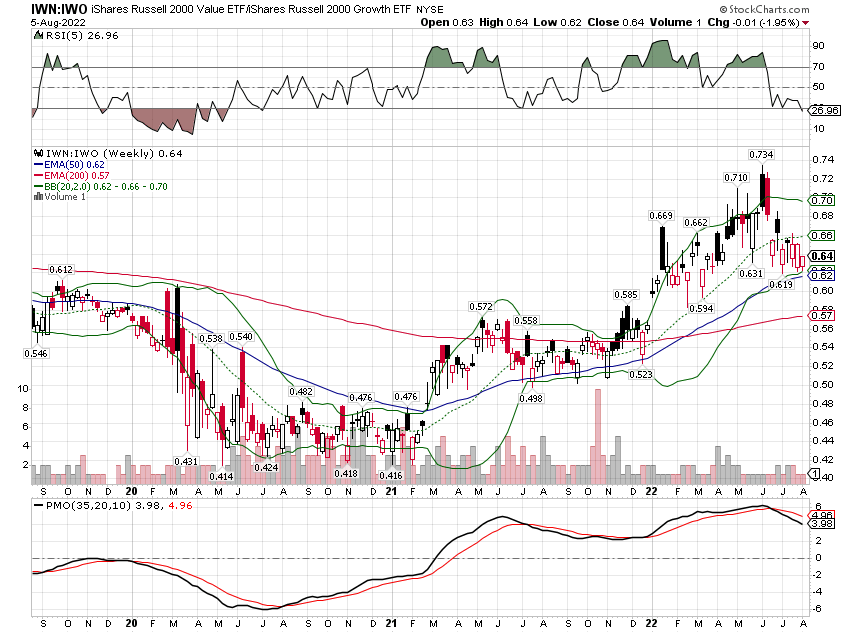 Non-US stocks were down slightly last week but, interestingly, emerging market stocks were up. Both Latin American and Asian EM were higher on the week, but Brazil was a leader, up 2.5% on the week. Not what we’d expect in a strong dollar environment by the way. 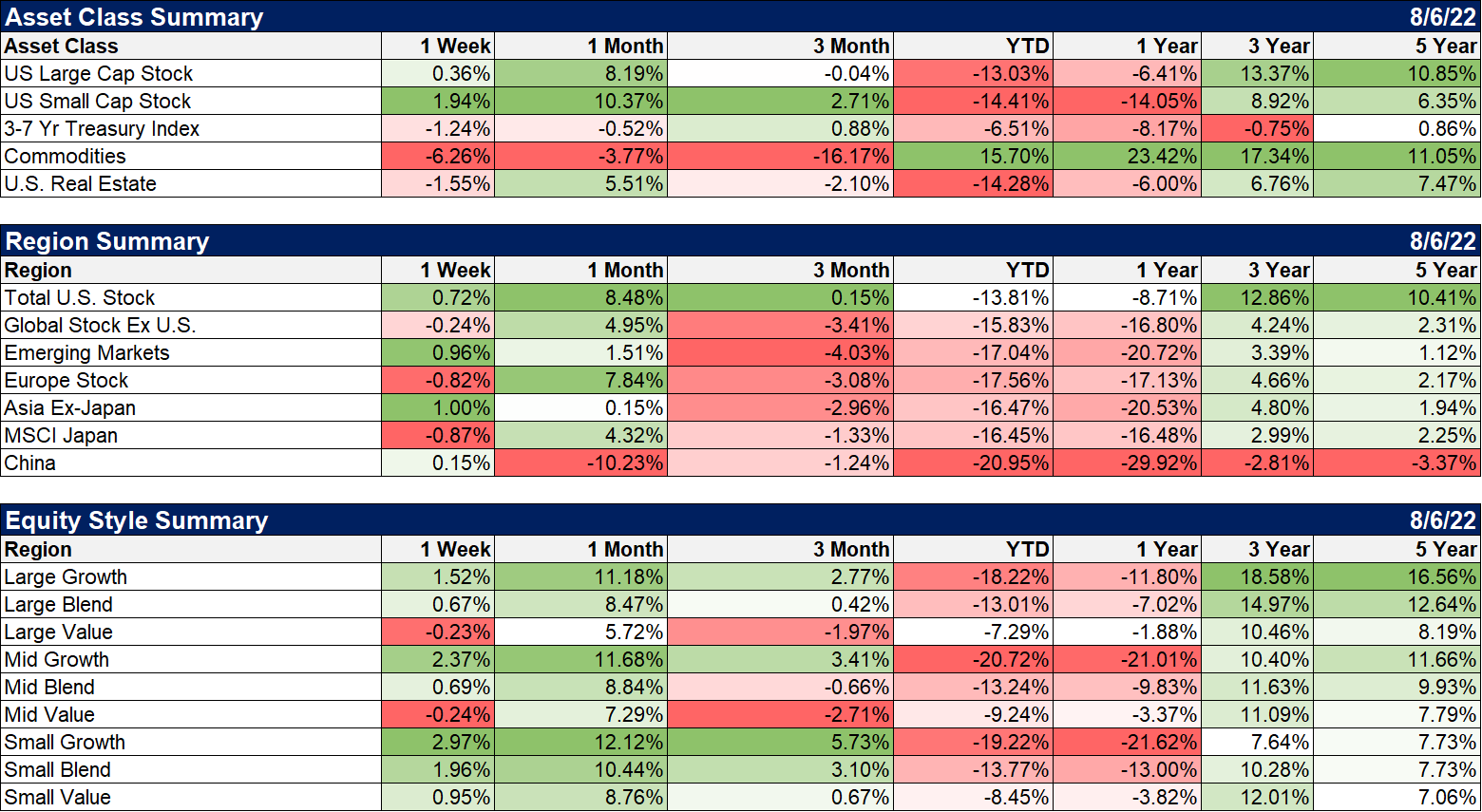 Last week I said that crude oil dropping below $90 was looking less likely but I obviously spoke too soon. Energy stocks took a beating last week as oil did indeed fall into the $80s. Can it go lower? I see some technical support around $85 but frankly, I can easily make a case for a fall down to the low to mid $70s. I’ve seen a lot of “analysis” lately about how gasoline demand has dropped to levels below 2020 but I’m not buying that because I have eyes and a car. There’s more going on there than meets the eye, mainly that there is a difference between wholesale demand and retail demand. The IEA figures everyone keeps citing are wholesale and do not always correlate with retail demand, especially in an environment where prices are dropping. Imagine for a minute you own a gas station and you see prices drop for 50 straight days. Are you going to fill your storage to the top? Or maybe wait a bit for prices to keep falling? I think you know the right answer.

This correction in crude oil prices is just taking the premium out of the market from the Ukraine war. Right after the war started the market developed a large backwardation (spot prices higher than futures) due to heavy near-term demand over fears of supply disruptions. The premium for front month versus six months out rose to $15 or more after the war started but that has been slowly falling in recent months. The spread now is about $5. If we have real demand destruction, we’ll go into contango where front-month prices are lower than future months. We aren’t even close, so no, this isn’t demand destruction in the sense of the economy is falling apart but more about Russian supply fears evaporating. I said when this started that Russian oil would get to the market and it is.

So, while I can make a case for crude in the $70s, I don’t think that is likely unless the US economy is headed for a deep recession, something I don’t see right now.

Noteworthy among these indicators is the narrowing of credit spreads. After reaching nearly 6%, spreads are down about 150 basis points since the peak just over a month ago.

There’s another old saying on Wall Street, that the market can stay irrational longer than you can stay liquid. The consensus can be right for a maddeningly long time. Bull markets rise more than they should and bear markets fall more than they should. Efficient markets? No, thank goodness.

The contrarian position can be painful if you enter it too soon which is why we don’t practice what I call “all or nothing” investing. Our portfolios are still positioned defensively because we are unsure whether the consensus trades will continue. We haven’t seen any trends break yet. The intermediate-term trend of stocks is still down, rates and the dollar are still up. We need to see some evidence those trends are ending before we get aggressive about the contrarian trade. We aren’t there yet but the conditions are in place for that to change, maybe rapidly. Stay on your toes.