“The world is not driven by greed. It’s driven by envy.”

I think this perfectly encapsulates our current investing era. In a day and age where social media has replaced not only traditional news media but human interaction, where influencers and gamers are top career aspirations for the nation’s youth, where artists (content creators) are paid by the number of followers, likes, and comments, and where keeping up with the Jones’ (or the Kardashians, or the Windsors) is no longer a silent, Sisyphian struggle but a top-rated TV series or Netflix special, it is only natural for this poison to seep into the investing world.

Youtube stars dole out “investment strategies” left and right, extolling the benefits of the newest and coolest money-making venture, as per views, of course. Message boards are full of posts containing stock and option trades that yielded % returns in the hundreds and thousands, over the course of no more few days. Virtually riskless, they say. ATM machines that post your photo along with your balance on a leaderboard for the world to see, meant as an artistic representation of our wealth-flaunting tendencies. It’s not so easy when the bubble pops though as so many in the crypto world are now finding out.

And even if we are skeptical, we become befuddled with amazement, consumed by “why not me?“. We are driven by envy as much as we are by greed. We see that our neighbor is excelling, or so we think, so we change our own course, or regret that we didn’t take the plunge. We see that SHOP and TSLA have PE ratios of upwards of 500 and 1000, respectively, but we dive in anyways and become shocked that they tumble in price. We see that top celebrities are pushing Crypto, from Matt Damon to the Kim Kardashian (again!) to the GOAT Tom Brady himself, so we want to be covered in that heavenly glitter ourselves and open an account at FTX…or Alameda; we’re not sure.

The best way to do that is to have a strategic, diversified investment plan in place and to stay true to that plan when things go awry or when others claim greater riches elsewhere.

Avoiding envy, and its associated pitfalls, is one of the simple secrets to a successful investment portfolio.

Side note: In a world where Taylor Swift has more risk aversion and performs better due diligence than the renowned hedge fund, Sequoia Capital, it’s imperative that you find an advisor you can trust.

After closing below the 200-day moving average for two weeks running, the US Dollar seems firmly entrenched in a short-term downtrend. We have a target of 102 but a bounce here is pretty likely as conditions are quite oversold. 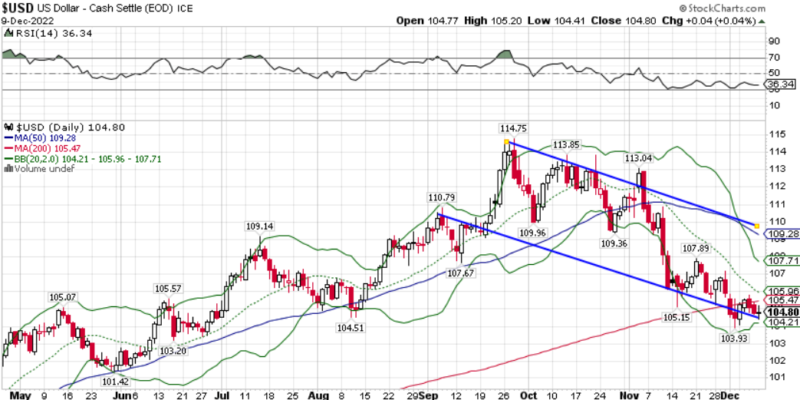 Longer term, you can see that the US Dollar sits just above its 50-week MA and at strong support at the 104 level after a 9% move down since late September. The longer-term uptrend is still intact, and with the relative strength index currently sitting in the low 20s (30 being a level associated with oversold conditions), we are inclined to believe that the dollar will head higher in the coming weeks.  The 108-110 level is a reasonable expectation. 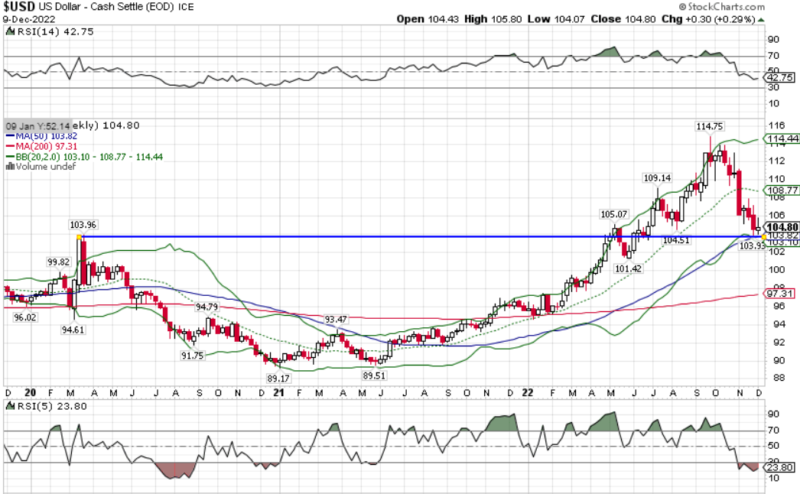 In the last week, the 10-year Treasury Yield fell to the 3.40% mark before bouncing off support. On Friday, the index was buoyed by the November producer price index, which showed higher-than-expected wholesale prices despite the Fed’s best efforts. The increase was 0.3% for the month vs the expectation of 0.2%, and 7.4% from a year ago vs 7.2% expected. Food prices and financial services were the big culprits, offsetting decreases in gas and transportation costs. All that being said, the PPI is at the slowest 12-month pace since May 2021. Year-over-year, the PPI shows a decline in prices for all components, just at a slower pace than expected.

The inflation data, along with the coming week’s CPI report, keeps the Fed on track for yet another rate increase. The probability of a 50 basis point hike next week hit 78.2% after Friday’s action. The likely 0.5% hike would push benchmark borrowing rates to a target range of 4.25%-4.5%, 0.75-1% away from the expected peak in May (based on futures). Looks like we have two more rate hikes to go. 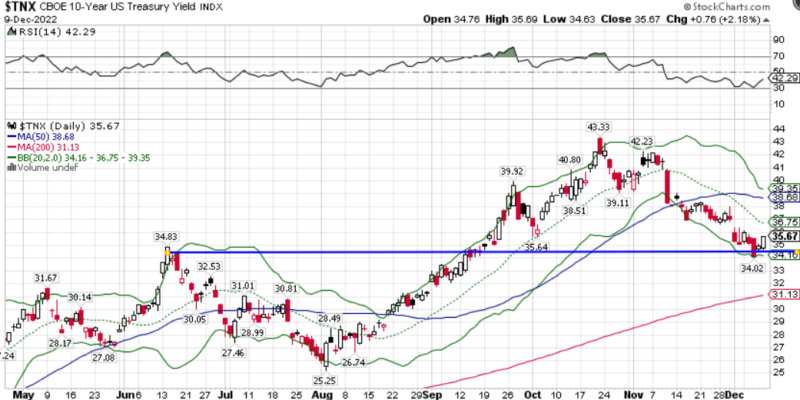 Just as with the US Dollar, rates may have come down too far, too fast, so a bounce is likely to materialize. The uptrend of the 10-year yield held (for now) and is still intact. If the previous trend reasserts itself we would expect a new high. For a variety of reasons we think it will stop somewhat short of that. 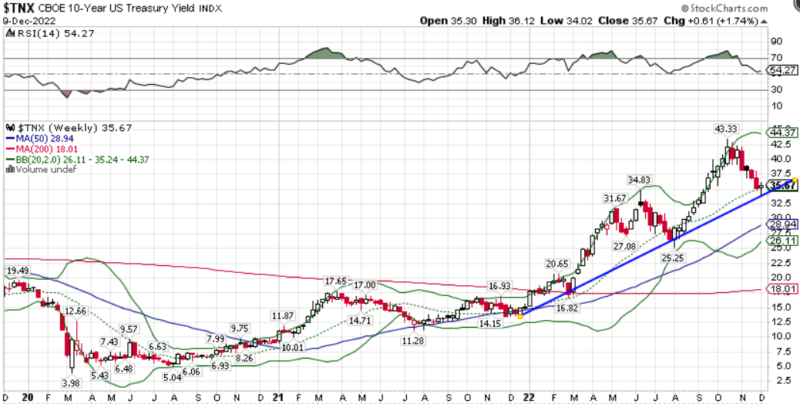 Quite the reversal. After a week where all asset classes were up, stocks, real estate, commodities, and even bonds reversed course and finished in the red. The big loser of the week was commodities, down over 6%. US small cap was down 5% while US LC finished 3.37% lower.

Regionally, the US market has continued its underperformance that really started to gain steam in September. China led the way (+6.77%), with reopening once again at the forefront. Global ex. US (and specifically Europe) was only marginally down for the week, outperforming even as the dollar stabilized and actually ticked higher for the week. If the dollar reverts to the mean after its recent 9% drop, we might see some reversals in the international markets, but as of now, they have bested the US in 2022 performance (-14.43% vs -18.56%) with only a few weeks to go.

Value once again outperformed Growth in the last week. That has been the story of 2022. Momentum now favors the value equity style and has since late 2021. These stylistic trends, once established, tend to last years.

Our portfolios performed relatively well despite our exposure to commodities. Our moderate risk portfolios were down about 1.25% versus 3.37% for the S&P 500, and 2.22% for a traditional 60/40 portfolio. In what is becoming a recurring theme, our allocation to international stocks, US value-focused stocks, and gold has helped us beat the overall market. 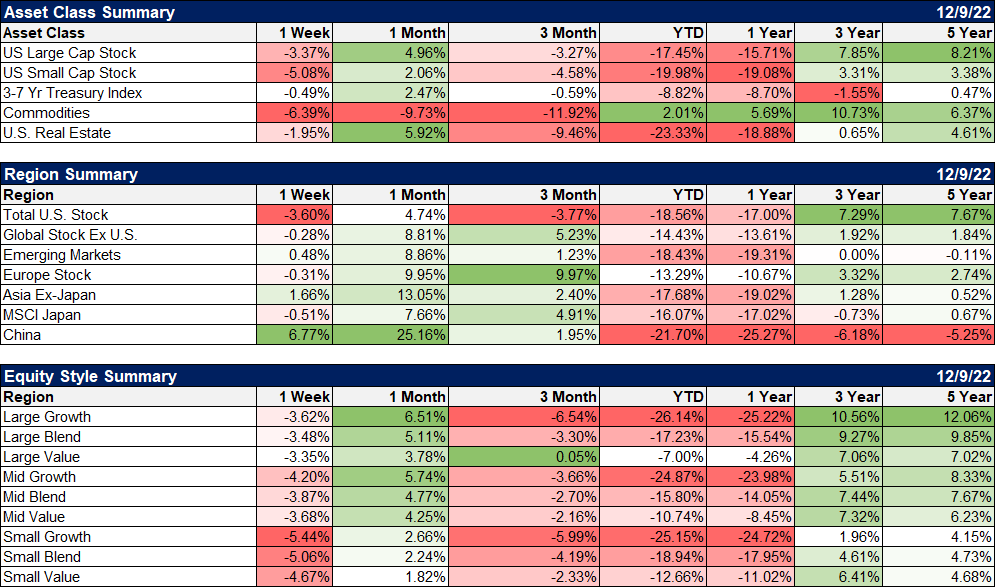 Energy was the big loser of the week (-8.45%). Defensive stocks predictably outperformed, as Utilities were down only 0.28%. As for surprises, Real Estate was only down 1.72% as the 10-year was essentially flat and mortgage rates continued to decline.

Energy stocks have finally started to catch up to crude on the downside. Crude was down $9 in the last week and we think WTIC could easily fall into the mid-60s towards the 200-week MA. By the way, there is still a pretty wide gap between Brent and WTI which leads us to believe the drop in WTI isn’t about demand despite the contango in the futures market. We would not expect WTI to get below that mid-60s level though, absent a deep recession. We have been targeting XLE around the 78-80 level, as that seems like a long-term buy point and a likely bounce point. The RSI (Relative Strength Index) is approaching single digits so this can happen sooner rather than later. 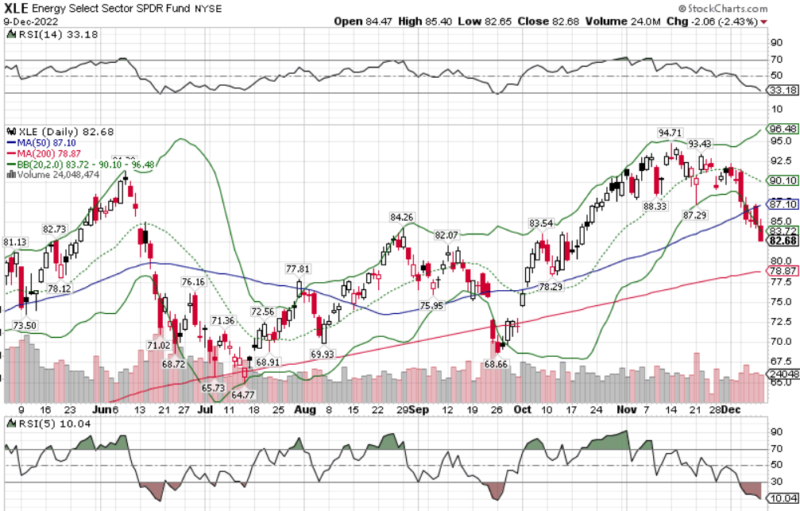 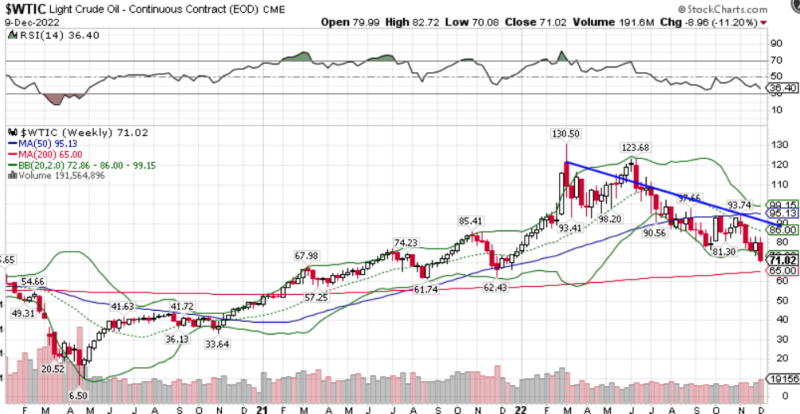 Credit spreads widened slightly after our last update. The VIX was up over 10% in the last week but still finds itself down 13% in the last month.