We received a host of economics reports this past week; some good, others not so much. The week started with the Consumer Price Index report coming in better than expected at an increase of just 0.1% from the previous month (7.1% from a year ago), compared with respective estimates of 0.3% and 7.3%. This is great news (and the market responded in kind), as inflation continues to moderate not only here but also in Europe. US import and export prices were also both down in November. Economic sentiment continues to improve in Europe (ZEW survey better than expected) and in Japan (Tankan survey).

As far as the bad news: Well, retail sales declined 0.6% in November, worse than the estimate for a 0.3% drop. Industrial production ticked lower (-0.2% vs estimates of 0.1%). Dig a little deeper though, and you’ll notice some silver linings. Retail sales ex-autos and gas were down 0.2%, so not all that bad (but still in the wrong direction). The decline in industrial production makes sense too, in light of the ongoing inventory correction. But inventory/sales ratios appear to be peaking so we don’t think any drop in production lasts all that long unless sales really collapse. A little more worrisome is the Empire State Manufacturing Survey, which measures activity in the New York region. It posted a reading of -11.2 against the estimate of -0.5. Similarly, the Philadelphia Fed survey posted a -13.8 versus an estimate of -12. These reports, like the PMIs and ISMs, are survey based and don’t carry as much weight as actual hard data reports.
Stock prices took a beating due to the fairly weak economic data that came after the CPI report and the S&P 500 is now down 11 of the last 16 days.  Just remember though, rates and the US Dollar are much more important signals of actual economic activity than the stock market. Despite all the fear and the hype, not much changed last week in that regard. The 10-year yield short and intermediate-term trends are still intact (down, up) and the US Dollar short and intermediate-term trends are intact (down, up). Despite the end of week stock market fireworks, it was just another nondescript week. Instead of focusing diligently and intently on the markets over the next few days, maybe we’ll all be better served reviewing our portfolios and attending to these sneaky-important financial items before the end of the year.

Despite the negative economic reports and the reaction to the Fed rate hike, the US Dollar barely budged for the week. It has managed to hold onto a 9.2% gain for the year in spite of its nearly 9% drop from its high 3 months ago. We had a short-term target of 102 and we nearly hit that level before $USD bounced back above the critical 104 level.

The longer-term uptrend is still intact and above the 50-week moving average. The relative strength index (RSI) is still sitting in the low 20s (30 being a level associated with oversold conditions) and the Price Momentum Oscillator (PMO) is on the cusp of signaling a bullish crossover, so if we are to maintain this uptrend, a bounce here is necessary and expected. Conditions are oversold. 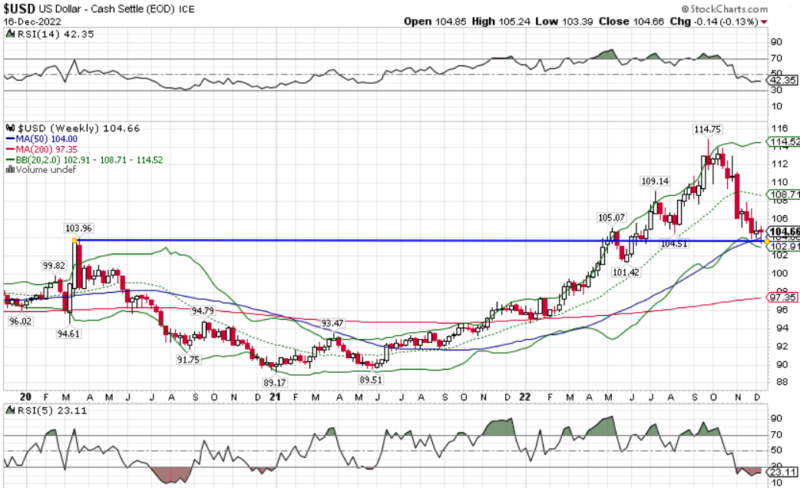 The 10-year yield held right at the longer-term uptrend line and the trend is still intact for yet another week. It is getting perilously close though. That being said, the 10-year yield was down 8 basis points and the 2-year was down 16, moves hardly commensurate with the stock market action of the week. More interesting, considering what has transpired over the last few months, the 10-year and 2-year yields are essentially unchanged since late September. 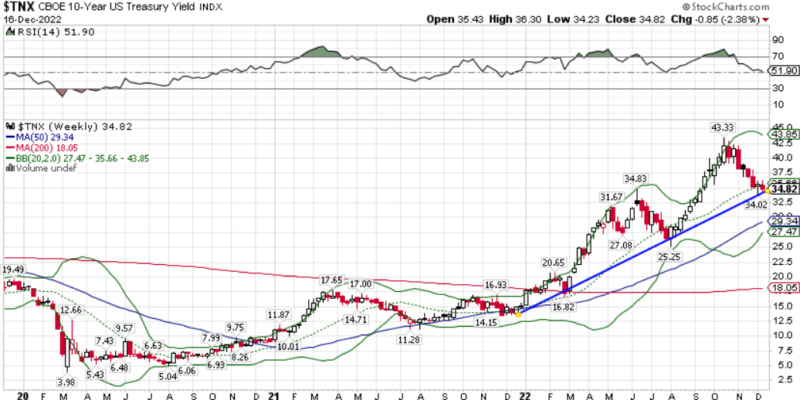 After a week of dismal economic reports and Fed action, we had a continuation of selling pressure in the markets. US large cap led the market lower (-2%) while US SC slightly outperformed. The big winners, though, were commodities, up close to 3%, and US Treasuries.

Regionally, China (-2.76%) and Europe (-2.61%) reversed course after a big week. The international outperformance we’ve witnessed this year is due for a pullback as the US dollar is primed to rebound. Global ex. US marginally underperformed the US market for the week, but for those keeping track, has still bested the US in 2022 performance (-16.31% vs -20.21%) with only two weeks to go. Europe, despite the war in Ukraine, despite skyrocketing energy prices, despite anemic economic activity, is the big winner (best loser?)  at -15.56% year-to-date. Surprise, surprise.

Now onto equity style: Value yet again outperformed Growth in the last week, this time by a spread of almost 1%. It continues to be the story of 2022. Momentum firmly favors value. We think this trend is likely to persist for the next few years.

Being down for the year isn’t pleasant, but outperforming our benchmarks makes the medicine go down just a bit easier. For the week, our moderate risk portfolios were down 0.6-0.8% (not every account is identical) versus -2% for the S&P 500 and -1.8% for a traditional 60/40 portfolio (our primary benchmark). Our allocation to US value stocks (and specifically utilities), gold, general commodities, and intermediate Treasuries has helped us beat the overall market for another week. 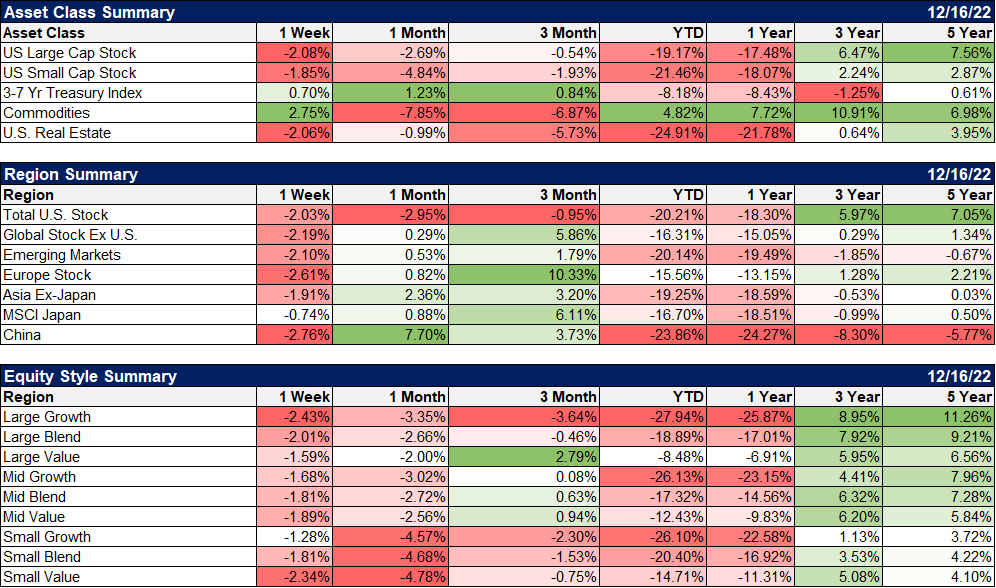 As mentioned above, utilities were outperformers, with a minuscule -0.5% drop for the week to go with a 0.56% gain for the year, despite a rising rate environment. In general, defensive stocks (as to be expected) was the place to be, as consumer defensive and healthcare stocks are marginally down YTD as well.

Energy was the big winner at +2%, but the gain was much more substantial before selling off at the end of the week. Energy also leads all sectors for the year, up a whopping 56.72%. Communication services (think META, GOOG, NFLX) and consumer cyclicals (AMZN, TSLA) have been the big losers year-to-date, down 37.71% and 34.11% respectively.

Nothing to report here. Credit spreads barely budged. The VIX inched slightly higher even with all the selling in the last week but still finds itself down 13% in the last month.

This is our last update for 2022. Joe will return early next year with a complete 2022 Markets and Economic Review so look out for that.

We hope your holidays are filled with warmth, peace, and joy. Happy holidays from us at Alhambra Investments.