History Repeats Itself Because No One Was Listening The First Time

History Repeats Itself Because No One Was Listening The First Time

File these under Joe Calhoun’s “everything has already happened” theme. In doing research for last Friday’s RealClearMarkets column I happened to read the Republican Party Platform. I was mostly interested in the Gold Commission/hard money initiatives, but some of the other “planks” offered a very telling glimpse into the party’s positions:

 They [The Democratic Administration] have debauched our money by cutting in half the purchasing power of our dollar.

 …the Administration has praised free enterprise while actually wrecking it. Here a little, there a little, year by year, it has sought to curb, regulate, harass, restrain and punish. There is scarcely a phase of our economic and social life today in which Government does not attempt to interfere.

 We will maintain special committees in Congress whose chief function will be to study and review continuously the problems of small business and recommend legislation for their relief.

 Reduction of expenditures by the elimination of waste and extravagance so that the budget will be balanced and a general tax reduction can be made.
 A thorough revision and codification of the present hodge-podge of internal revenue laws.

 To restore a domestic economy, and to use our influence for a world economy, of such stability as will permit the realization of our aim of a dollar on a fully-convertible gold basis.

I doubt there are any surprises amongst the selections above, copied directly from the Party document. Perhaps the only revelation is that the quoted planks appeared in the Republican Party Platform that first elected the ticket of Dwight Eisenhower and Richard Nixon in 1952.

Sixty years later and the Republican Party is still hitting the same themes and messages, perhaps because it has largely been ineffectual in its ability to deliver. Maybe the adage of power corrupting is fully appropriate, but in the past six decades these issues have grown rather than receded in any meaningful manner. It does not matter which party holds executive or legislative offices with regard to the size of government and its reach into the private sector, the results have been exactly the same. It has been one single, inexorable rise in influence and control. Sure, there have been promises and platitudes along the way (there was a reference to gold money in 1952 just as there was a Gold Commission in 1982, neither had any lasting impact other than mollification), but, for the most part, government’s rise has concurred with changes in the definitions and consistencies surrounding money.

The primary impulse is to blame politics and the political system’s construction. The real culprit is what my piece aimed to demonstrate – that the system of gold as money is as much about political power as economic efficiency. A gold-based system, or commodity-based system, provides the people or the public with an unalterable check on the rise of government. If government has to compete in the market for true money, an element of responsibility and accountability is introduced. In a fiat regime where government debt replaces true money at the top of the credit pyramid, government has no real limitations on how far it can grow and expand. Under a hard money system, banks’ collective goals are closely aligned with the people’s need for true intermediation in the economy. Under fiat, banks are aligned with the political class. 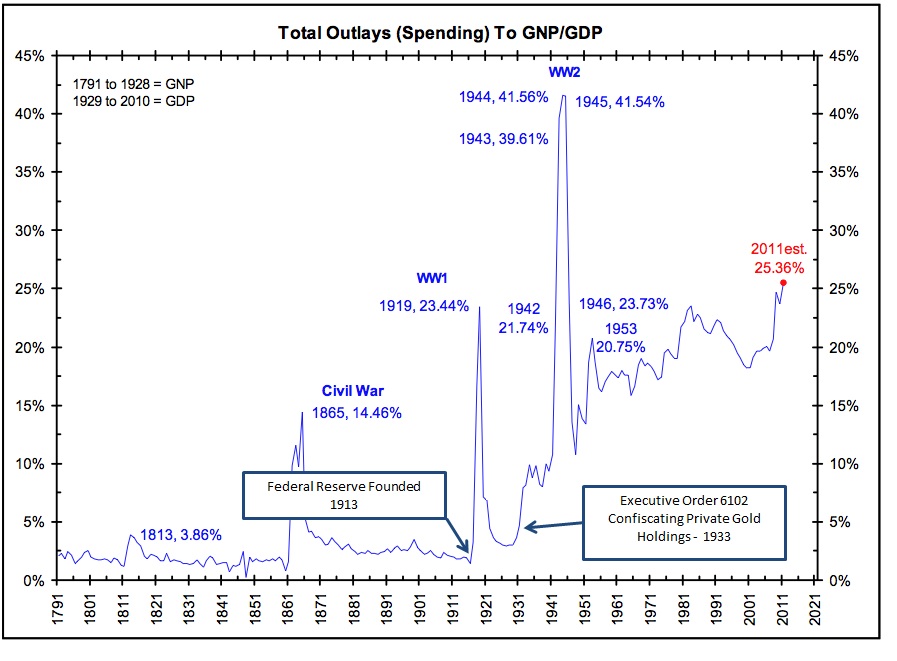 Until FDR removed the public’s ability to hold gold as money through executive diktat, government expenditures outside of wars were never above 5% of GDP. Without the ability to monetarily check the rise of government expenditures and redistribution schemes, the course has been set in the very nature of political animals. It was unchallenged conventional wisdom before 1913 that control over monetary affairs by governments was dangerous because the appeal of inflation and even directly printing to fund government expansion was too enticing to entrust to a central authority. Politicians, as the 1952 Republican plank demonstrates all too well, cannot be trusted with our money. Once control over money is decided in favor of the central authority, the role of government in the lives of its citizens is altered directly.

The only options left are to trust politicians to restrain themselves, or change the rules of the monetary game back to the dispersed power of public money. Fed Chairman Ben Bernanke is on record as decidedly against this option since it would restrain the ability of the Federal Reserve to act. That is precisely the point. The Federal Reserve has provided no check on government expansion, and has, through design, actually and actively assisted the federal government with this trend (there is a reason sovereign debt was given favorable regulatory treatment under the Basel rules of banking, the monetary authorities believe in the power of taxation over true productivity as it pertains to risk – that tells you all you need to know about the political appointees that designed the modern banking system – that the former is actually derived from the latter is lost in the modern “science” of economics).

The more things change, the more they stay the same. Without a check on Bernanke’s unrestrained ability to act, the role of government will continue to rise, and history will continue to repeat itself because nobody bothers to listen.