The monthly auto “sales” figures include “floor financing” or “warehouse financing” units, i.e., dealer inventory. Automakers count as “sold” any unit that leaves the factory regardless of its ultimate destination or disposition. In other words, the monthly auto figures are “wholesale” sales figures, not “retail”.

We have discussed the wholesale/retail disparity before, but now it is finally getting the attention it deserved months ago. Enter the Wall Street Journal in an article appropriately titled, “Detroit’s Unsold Cars Pile Up”. The picture that emerges is essentially one where automakers overestimated the retail demand for their products. Some of that, among the domestic producers, was related to the aggression the Japanese producers have been exhibiting this year to regain market share lost after the 2011 tsunami. But that is not the whole answer, nor would I argue it is a significant proportion of this divergence between production and retail robustness. Imports will always be a factor in the disparity between domestic production and sales, but the data does not show a large increase in imported autos to account for declining production.

The difference between wholesale sales activity and retail activity offers a far better fit to current economic reality. To get a sense of where inventories are, the WSJ article spells it out in pretty good detail:

“GM also miscalculated demand for its pickup trucks. The industry norm for U.S. auto makers is between 60 days and 70 days of sales in inventory. GM had 138 days worth of Chevrolet Silverados at the start of this month. In passenger cars, its Chevrolet Cruze inventory jumped to 64,390 vehicles or 96 days. One of the two plants that GM will idle this month produces the Cruze.”

“Today, all three [domestic automakers] face tough decisions on cutting production or profitability as inventories have soared. Ford, for instance, finished November with 18,336 unsold Fiestas, or 124 days worth of supply, compared with 96 days in October.”

“The Dart, Chrysler’s most important new offering of the year and its first compact sedan since 2005, began December with a 173 day supply. Sales of the Dart slipped in November compared with the previous two
months.”

These are empirically narrow pieces of the patchwork auto market, for sure, but when we put these snapshots of inventory overhang together with the wider automobile industry it offers a better explanation for the dramatic decline in auto assemblies beginning in August 2012 (the same month that gave us renewed energy price pressure). 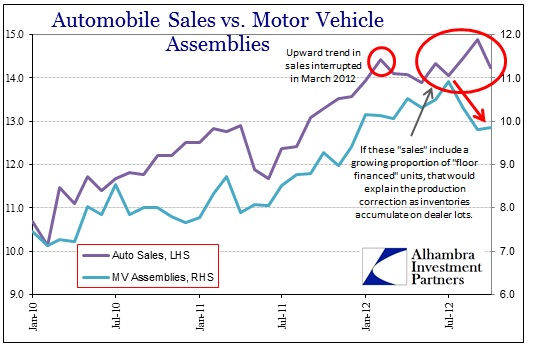 I should also point out that the production correction or contraction is not limited to consumer sales. As I noted last week in a post on GDP revisions, business investment tailed off dramatically in Q3 – with transportation investment down at an annualized rate of -16.3%. Not all of that decline is contained in the automobile segment, but we do know from other data series (durable goods orders and shipments, for example) that the decline in demand for transportation equipment does extend into the auto segment. 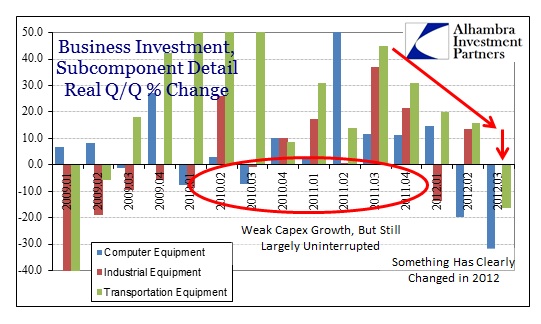 Clearly automakers have overestimated end demand (not wholesale) as units flow through the sales channel from factory to dealer to user (which includes government and various private fleets), but why would they be off by such a large degree in 2012? The WSJ article provides an important clue:

“We thought the economy would have been further along at this point but as we look into December and 2013, we will get a tailwind from housing which benefits not only autos but the entire economy,” said GM spokesman Jim Cain. [emphasis added]

It seems that we have monetary theory adherents in the midst of the auto sector. The second clause of Mr. Cain’s quote is revealing, if it is in fact genuine belief and not just corporate spin, in that GM is basing/has based its production schedule and predictions for sales on the ability of the Federal Reserve to “stimulate” the interest rate sectors of the economy. In terms of the auto market, that has proven to be somewhat true but only insofar as the ability of finance companies to offer subprime and zero interest loans has been enhanced (perhaps unwisely). Like the Fed, it is plausible that these auto producers believed monetary policy would have been much more effective at bringing in new borrowers to purchase new retail units. Inventory reality is intruding upon monetary theory.

Even if we assume QE 3 will act as Mr. Cain suggests, bringing in a robust tailwind for carmakers, there is still an inventory problem from here to there. Much like QE 2 before it, however, I would place little expectation for a large surge in auto sales based on cheap loans that have already been cheap and subprime for the better part of the last three years. Despite monetary ideology, cheap loans are not the only consideration for retail borrowers (nor for business investment).

The far larger problem, or headwind to use conventional, dumbed-down monetary vernacular, is household income and now corporate profits and cash flow. The ability to absorb new debt may be positively affected by the cheapness and availability of credit, but there can be no denying that such credit factors are secondary in comparison to incomes. So, the key to monetary intervention in this space is, as it has been for more than four years now, effectiveness in overall economic growth to begin generating robust income through employment.

Auto producers might be hopeful that in QE 3 the Federal Reserve has explicitly linked the growing housing rebound to employment, but again reality intrudes here. In context, the housing rebound is two orders of magnitude below pre-2007 levels, and therefore not much to base a new channel for income circulation (see chart below). Perhaps there is some hope that housing prices will reverse negative equity, but that would take a massive housing bubble occurring in a very short timeframe. Convoluted monetary flow channels notwithstanding, the only methodology left to hang such monetary hope onto is simple psychology (which Chairman Bernanke suggested recently is actually the prime expectation for monetary efficacy).

If that is the proper analysis of the end user situation, then production in the motor vehicle space is not supported by a monetary tailwind, but rather dragged down by a duel-headwind of lackluster to declining personal income on top of 2007-type extreme dealer inventory levels. I would expect idling factories to be more the norm than the other direction. 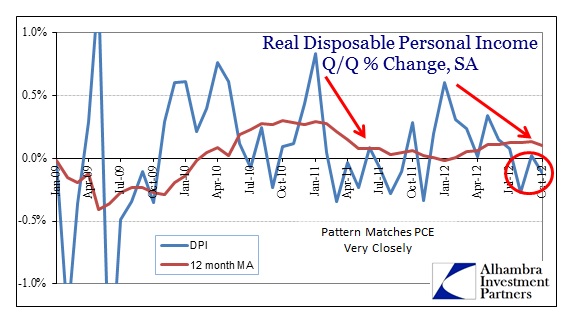 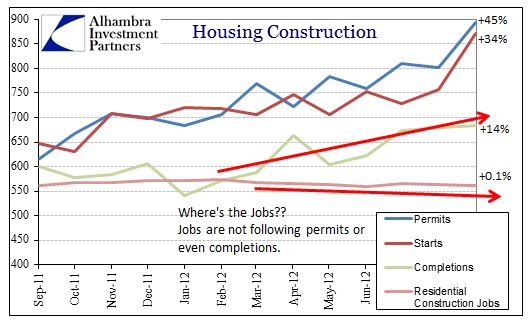