The talk of tapering QE has been incessant the past few weeks, no doubt playing a huge role in the volatility of the US Treasury market (as if there is some competition with the JGB market).  Yesterday’s dramatic selloff has been absurdly linked to consumer confidence numbers and “improving” economic fundamentals, as if bond rates suddenly care about improving consumer confidence after ignoring it for years.  No, “taper” is the catalyst that moves the credit markets.

The selloff in the UST 10-year has been the most dramatic of the recovery period, compressed into only a few weeks’ time.  That in itself conveys meaning far beyond the groping for hope in the economy.

It has not just been the Treasury market under pressure, however.  MBS prices have seen far more volatility and movement, as have related mortgage rates.  On Wednesday, May 25, MBS prices collapsed across the board, with some MBS quoted down more than a full point.  That may not sound like much, but that is about five times normal volatility.

The day before, Federal Reserve Chairman Bernanke had mentioned the FOMC might consider a “step down in the pace of purchases” of MBS in the next few meetings.  Fed compatriots in the economist community have tried to link that potential “taper” with some mystical improvement in economic fundamentals, but the aim is absolutely clear to any impartial observer.

As much as the FOMC minutes convinced markets the Fed might actually be serious, there was one passage that stood out the most:

“Regarding the composition of purchases, one participant expressed the view that, in light of the substantial improvement in the housing market and to avoid further credit allocation across sectors of the economy, the Committee should start to shift any asset purchases away from MBS and toward Treasury securities.”

“Substantial improvement” is an understatement to a large degree.  House prices in certain markets, as the wider media has finally begun to point out, are again out of control.  In what type of market is 20% Y/Y increase to be considered “normal”?  I cannot conceive of any kind of conditions, short of outright asset inflation, where 15-20% price appreciation in real estate is acceptable and believable as something other than monetary-directed misallocation.

Those were the price increases for March 2013 over March 2012 according to S&P Case Shiller.  Outside of Detroit, those cities were the ground zero of the previous housing bubble.  Overall, the national composite’s increase in March was the largest in seven years.

That likely prompted a rather unusual warning from Fitch.  In an article titled, “US Residential Recovery Too Fast in Some Local Economies” Fitch’s US Structured Finance, Residential Team noted:

“Several factors are combining to form an environment supportive of brisk home price growth, but few are capable of providing long-term support to sustain the recent pace of improvement. Primarily, restricted supply and bolstered demand factors are bidding prices up. The demand is artificially high as borrowers remain on the side lines waiting for prices to stabilize. We believe this level of housing demand is likely to abate once the pent-up demand is satisfied. The supply is also artificially low, as recent regulations have limited the pace of foreclosure sales and the large percentage of underwater borrowers continues to hope for further price increases to be able to sell their homes at a profit.

“The supply-demand imbalance is even more pronounced in regional markets that are seeing strong institutional and retail bids for rental properties. The low rate and steep drop in prices, coupled with the decline in homeownership, have attracted an estimated $8-$10 billion of new capital to this sector. Many markets have a large number of buyers vying for a limited number of homes.”

That is the problem when systemic prices come from marginal transactions – they are susceptible to these kinds of imbalances.  That is especially true for those regions, as Fitch also points out, where excesses from the previous housing bubble were never corrected. 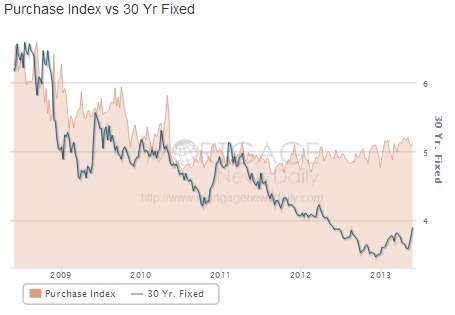 Most of the new “money” being brought into these housing markets is investment “capital” from large firms that are able to more closely access Fed “stimulus”.  This has a very distorting effect on real estate markets, something that the FOMC is keenly aware of.

Talk of tapering is all about taming.  The Fed sees the bubbles that everyone else is seeing in real estate (though they will never admit it publicly) and is using a textbook approach to address the misallocation – moral suasion.  The Fed will try to “talk down” the housing market before ever reducing its 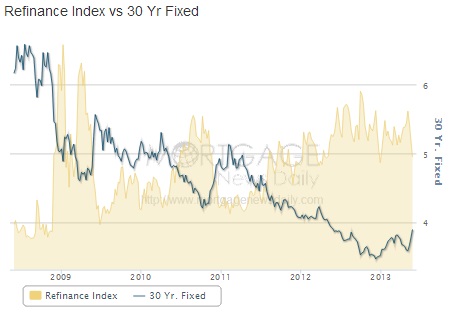 interventions.  And even if it is forced, by further imbalanced price action (inflation), I think the FOMC suggestion is the likely course.  Rather than reduce overall balance sheet expansion, the Fed will likely shift from MBS to UST to preserve the level of “flow” of new “money”.

It is not enough, apparently, for the Fed to push “money” into these markets and create such massive distortions.  Now, given a probable course of events knowing that “talking markets down” never works, the FOMC will be actively allocating credit between markets based on its own distortions.  The housing market, already somewhat volatile, may be in for a rough ride in the coming months.