The day after Lehman Brothers failed, the FOMC gathered to discuss how to conduct monetary business in the wake of the turbulence that decision created. Every single participant was willing to roll the dice on standing pat for two very big reasons. First, they felt that had been aggressive enough to counteract any downside, and that being aggressive in that fashion had actually made the possibility of escape with little damage that much more likely. In other words, they were aware of the worst case, but were sublimely unconvinced it was realistic.

Second, they assessed the primary problem as “fiscal.” In this context that did not mean more “stimulus” in the form of ridiculous tax cuts or ARRA-type wasting, but rather they recognized banks were in need of “capital” injections. The FOMC and Federal Reserve Board had been peering in that direction since Bear Stearns, but the strains of the GSE’s began to demonstrate the amount needed was simply overwhelming. Capital could not come from the Fed, and so there was almost relief that it was “somebody else’s problem.”

That meant Congress and the opening acts of what became TARP.

A panel of top business leaders testified before Congress about the worsening recession Monday, demanding the government provide Americans with a new irresponsible and largely illusory economic bubble in which to invest.

“What America needs right now is not more talk and long-term strategy, but a concrete way to create more imaginary wealth in the very immediate future,” said Thomas Jenkins, CFO of the Boston-area Jenkins Financial Group, a bubble-based investment firm. “We are in a crisis, and that crisis demands an unviable short-term solution.”

Actually, I think that passage came from a contemporary article published by the Onion rather than the FOMC transcripts. Sometimes it is exceedingly difficult to tell the difference.

BERNANKE. We don’t have a set of criteria, we don’t have fiscal backstops, and we don’t have clear congressional intent. So in each event, in each instance, even though there is this sort of unavoidable ad hoc character to it, we are trying to make a judgment about the costs—from a fiscal perspective, from a moral hazard perspective, and so on—of taking action versus the real possibility in some cases that you might have very severe consequences for the financial system and, therefore, for the economy of not taking action. Frankly, I am decidedly confused and very muddled about this. I think it is very difficult to make strong, bright lines given that we don’t have a structure that has been well communicated and well established for how to deal with these conditions. I do think there is some chance—it is not yet large, but still some chance—that we will in fact see a much bigger intervention at the fiscal level. [emphasis added]

Bernanke’s confusion persisted despite a “bigger” fiscal intervention that ultimately changed to wholesale capital injection that November (recall that TARP originally was designed to buy up “toxic” assets; then Treasury suddenly shifted and took the capital injection path). By December, as the FOMC and Board debated going to ZIRP, it’s as if the Onion’s “prescience” was in the room.

BERNANKE. So I would argue that what we are doing is different from quantitative easing because, unlike the Japanese focus on the liability side of the balance sheet, we are focused on the asset side of the balance sheet. In this case, rather than being a target of policy, the quantity of excess reserves in the system is a byproduct of the decisions to make these various types of credit available. I think that’s a very different strategy, and Bill gave some evidence—we can debate it further—that these different policies have had some effects on the markets at which they’re aimed.

The FOMC was very much acquainted with Japanese QE, having ridiculed the Bank of Japan in first discussing the “legendary” zero lower bound in 2003 – to which Bernanke and many others on the 2008 FOMC were participants. They knew its failures, but were confident because they shifted from asset to liability? I had to double check the transcripts to make sure that too wasn’t an Onion article. Given that we have a more durable look at these deliberations now, perhaps there are actually multiple facets to Bernanke’s recent admissions of being “overconfident.”

Back to September 16, there was one very dramatic infusion of what can only be described in contrast to all the absurdity as clarity. Boston Fed President Eric Rosengren essentially mapped out exactly what was about to happen.

ROSENGREN. I think it’s too soon to know whether what we did with Lehman is right. Given that the Treasury didn’t want to put money in, what happened was that we had no choice. But we took a calculated bet. If we have a run on the money market funds or if the nongovernment tri-party repo market shuts down, that bet may not look nearly so good. I think we did the right thing given the constraints that we had. I hope we get through this week. But I think it’s far from clear, and we were taking a bet, and I hope in the future we don’t have to be in situations where we’re taking bets. It does highlight the need to look at the tri-party repo market, look at the money market fund industry, and look at how they’re financing. There are a lot of lessons learned, but we shouldn’t be in a position where we’re betting the economy on one or two institutions. [emphasis added]

That speaks to a number of factors, but in particular he seems to actually and realistically grasp that there is something very wrong where a few financial firms endanger the whole of the economy, not just in the US but globally. That would have suggested, had they taken the time to actually think about it, just how screwed up “markets” had become, and how disastrously the financial domination they had abetted was now the very weak link that could sink them, and us, all. In other words, they had so corrupted markets and economic function as to be now basically gambling with everyone’s future, and doing so from a position of now-admitted extreme overconfidence and brutally sharp misunderstanding and incompetence.

What was the committees’ individual and collective response and discussion to President Rosengren’s dire and sober narration, this conspicuous island of clarity in that sea of impish noise? Nothing. Not a word. To be fair (in only a very small way) this was part of a roundtable discussion, but triparty repo, which was about to totally seize and cease to function, and money market funds, which would ignite the final stage of panic, were washed and wished away as if some children’s tale of frightening monsters lurking menacingly under the conference table. The only mentions of tri-party repo were in the opening minutes of the meeting, and those were limited to Lehman’s participation and any counterparties. No real concern about total systemic function, particularly as that was where money market funds crossed over into wholesale.

After Rosengren, repo was only spoken of once more. And, as you would expect, it was all adhered to more assurances; nothing to directly address the possibilities President Rosengren broached.

WARSH. A couple of more points on markets. I think the work that was done over the past few days on Lehman Brothers should make us feel good in one respect. Market functioning seems to be working okay—by which I mean that the plumbing around their role in the tri-party repo business, due in part to the Fed’s actions, seems to be working. It’s ugly. The backroom offices of these places are going crazy. There’s a lot of manual work being done. So they wouldn’t give it high marks. But it looks as though positions are being sorted out in a tough workmanlike way, and so that’s encouraging. 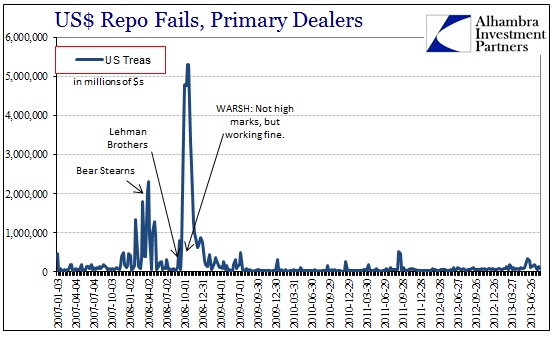 Just to point out the absurdity here, and make sure it is obvious, the numbers in the chart above are millions of dollars. The week of that FOMC meeting, repo failures (collectively of those failures to receive and failures to deliver) amounted to $577 billion – a big number, to be sure, but below the $2.3 trillion the week of Bear Stearns. As Rosengren worried, the repo market did not survive the week, and failures spiked by an almost incomprehensible $3 trillion the very next. The ultimate peak, showing complete repo obliteration, was $5.3 trillion the week of October 22, 2008. Sometimes there is wrong, and sometimes it really is “same planet, different world.”

Is there a giant leap between this and “maybe America needs a new irresponsible and largely illusory economic bubble in which to invest”? I think it’s pretty clear the answer to that.

That’s why I had trouble again this week with what looked like another economic program cut from the same FOMC/orthodox cloth.

Describing it as a burgeoning growth sector that will drive the American economy for decades to come, an encouraging new report out Thursday estimates that burying and cremating the baby boomer generation will add some $200 trillion to the nation’s gross domestic product over the next 30 years.

The report from research firm Moody’s Analytics claimed the impending deaths of the 76 million Americans born between 1946 and 1964 would spur a long, robust period of expansion, single-handedly pulling the country out of its current economic malaise and fueling a dramatic increase in wages and standards of living as the nation mobilizes its workforce to dispose of the age group’s remains.

I then remembered the FOMC transcripts for 2013 will not be released until 2019 (if at all by then), and, after some very minor investigation, found that the above quote was also from the Onion – you can forgive me for not seeing the difference.