I think it is very clear that the Bank of Japan is becoming more and more sensitive to swings in the Japanese stock market. Policy pronouncements, toothless as they usually are, seem to correlate very well with downturns in stock prices. Perhaps some of the Federal Reserve literature is making its way East.

There were no doubts, none whatsoever, last year as the BoJ unleashed its latest (9th or 10th, depending on definitions) form of QE. On April 4, 2013, in announcing this debasement history, Governor Haruhiko Kuroda himself said unmistakably that, “We took all available steps we can think of. I’m confident that all necessary measures to achieve 2 percent inflation in two years were taken today.” That is an unmistakable assertion, far, far from, “well, we’re going to do a lot today, and then maybe in 6 or 8 months if it doesn’t work we will do more.”

Yet that is exactly where we are. The talk of additional QE measures has become so ubiquitous that Kuroda himself acknowledged the possibility over the weekend. While carefully framing it as data-driven, as in they will also reduce QE should the economy actually improve, there is no mistaking what this means. The BoJ and everyone else in the Japanese orthodoxy are extremely nervous not just of the upcoming tax increase, but the lack of real progress to this point.

It’s become so unsettled that the Japanese government is considering publishing the outcome of “shunto”, or the annual wage talks. That amounts to a threat to Japanese companies, a public attempt at shaming them into doing what QE has so conspicuously not.

There is no mistaking now the course to which these authorities have set. For its part, the BoJ will be shooting for 2% inflation come hell or high water.

“Our biggest goal and mission is to fully overcome deflation, achieve 2 percent inflation and sustain it,” Kuroda said. “What matters most now is to realize the inflation goal at an early time,” he added, indicating the BOJ’s readiness to take additional easing measures if achieving the target becomes difficult.

That charted economic course has nearly destroyed the trade system that Japan is most depending on for its very turnaround. While January’s trade numbers were beyond horrendous, on the surface February appeared to be much better – but only if you ignore seasonality. Clearly there were some Chinese-related adjustments (new year holiday, most likely) but averaging out both January and February and comparing to the same months in previous years shows the scale of the disaster; without rebound. 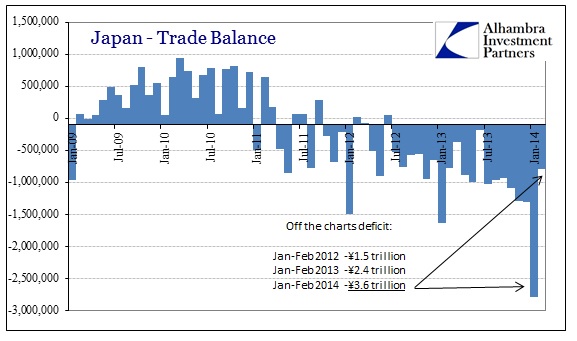 Where the trade deficit “improved” to ¥800 billion in February from ¥2.8 trillion in January, that was actually worse than February 2013 and February 2012. On a 2-month basis, the tragedy is clear (as is the direction). 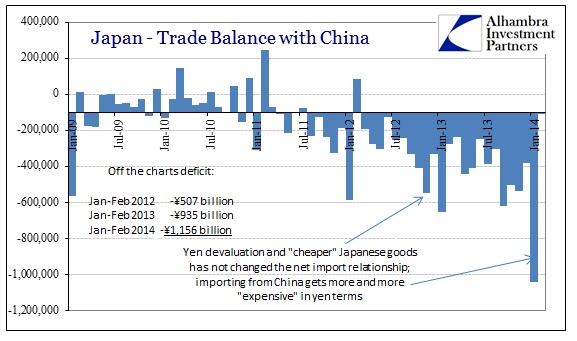 Most importantly, while the Chinese adjustments seem to account for much of the change, the trade balance with almost every other major partner has grown worse, including the United States. That is also the case for Asia outside of China, a trade region that the Japanese used to dominate not all that long ago. Japan still holds a surplus to the region, but it is shrinking quickly – again, as Japanese companies offshore their productive capacity. 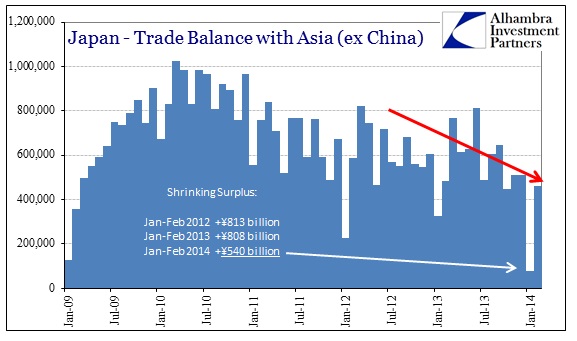 The January-February trade balance with non-China Asia was the worst since 2009. Despite a massive devaluation that has made Japanese products relatively “cheaper” to foreign buyers and Asian products far more “expensive” to the Japanese themselves, there is no salvation here as the yen devaluation actually entices firms to further offshore production while, at the same exact time, directly and systematically impoverishes the whole of the country. That 2% inflation target is a real-time indicator of this poverty.

In such an environment, what possible reason would Japanese companies have to raise wage rates? There is no economic impulse there, which is why the government is resorting to folly. And, on the monetary side, the BoJ stays the course, steering right into the iceberg without regard to anything other than the course itself.