Gold has seen a healthy run since the first incidence of QE taper, again conforming to the idea that gold is tail risk insurance unrelated to inflation perceptions. That included a January rebuke to the collateral pressure/selloff pattern that we saw too much of in 2013. In the past few days, gold prices have come down a bit and that has coincided (somewhat) with another bout of forward rate incrementalism, bringing back the collateral pressure question. 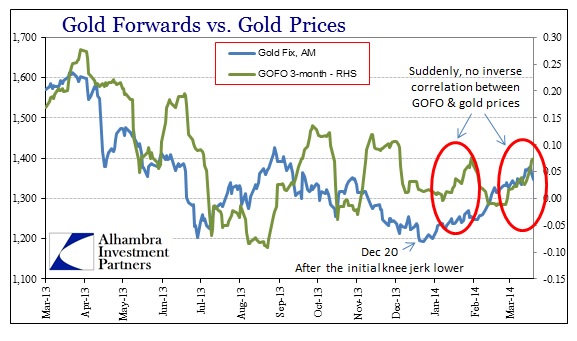 There is any number of possibilities here, including profit taking from speculators, that would offer a compelling explanation for the past few days’ gold trading. However, it would be wrong, in my opinion, to simply ignore the recent change in GOFO. 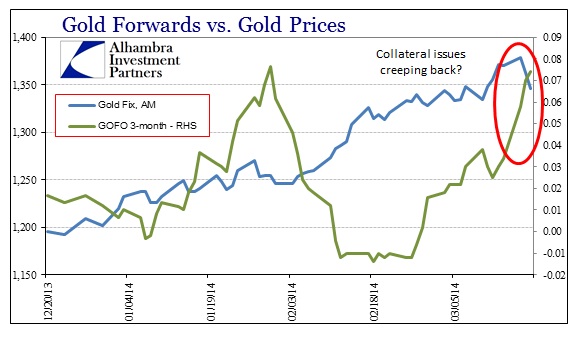 Since forward rates began rising nearly a month ago, any collateral relationship would appear to be far weaker than previously observed. With that in mind, I can’t help but think that there is a spreading illiquidity that might tie gold to copper, and thus China. 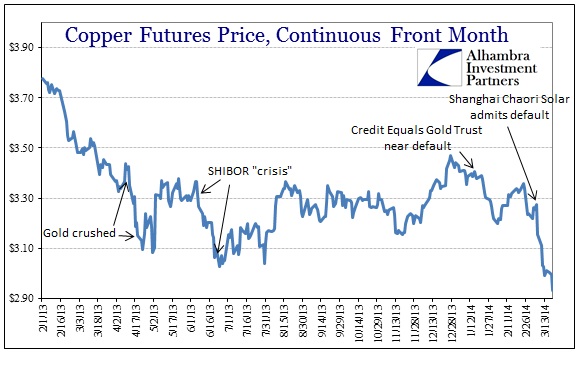 In some ways, if this is correct, it may have been inevitable given the dollar situation there (more on that in another post). You would have to believe that as dollar liquidity worsens, the more broadly dollar shorts would appeal to keep funding their positions, even if it meant rehypothecating gold claims or leasing gold itself. There is little doubt that a large quantity of physical metal has made its way eastward across the Pacific, so it may be, in theory, available for liquidity alternatives to copper and the PBOC.

I think that is underscored more than in passing fashion by the slight backwardation in copper futures out to July. Such a short tenor of backwardation is the hallmark of collateral issues and liquidity strains. It is, unfortunately given the paucity of direct observation or even inference, a factor that bears closer scrutiny and further analysis before rendering any harder conclusions. With Chinese dollar shorts in clear dysfunction, there may be further gold spillover ahead, particularly as copper gets hammered. Will the safety bid under gold, evident since QE taper, be enough to offset some or all of this copper/China mess?