Wal-Mart is not just the world’s largest retailer, it employs some 2 million workers and handles an estimated 8 cents of every dollar spent by consumers. Ninety percent of all Americans live within 15 minutes (average) of a Wal-Mart and the retailer averages better than 100 million customers per week. That racks up to about $36 million in sales per hour (Q4).

To say that Wal-Mart is an important piece of the economic puzzle is an understatement. You can argue that it serves only the lower ranks of the income scale, but that defines most people and by far the largest piece of the US economy. With such systemic importance, it is disappointing to see the company’s appeal to snow as an excuse.

And though no one likes to talk about weather, it was a real factor across the United States. In fact, right here in Northwest Arkansas, we had the latest snowfall in the history of Arkansas reporting.

That was Wal-Mart President and CEO Mike Duke appealing to spring snows for a quarter that fell well below expectations. Wal-Mart US President Bill Simon seconded that excuse:

…some of the most unfavorable spring weather we’ve seen in recent years across much of the country impacted our business.

While we don’t generally like talking about weather, it certainly had an impact. Weather sensitive departments like outdoor living, sporting goods, air movement and apparel were challenged, particularly from mid-March to mid-April, when weather was much less favorable than last year.

With the brightening sun of spring bringing shoppers back in after “unusual” cold, Simon’s outlook for the rest of the year:

As of now, we’re encouraged by the start of sales in the second quarter because we’ve seen more normalized weather and we’re getting past the main effects of the reduced tax refunds.

We continue to feel good about the underlying business, as evidenced by first quarter results in areas less impacted by weather, as well as by our market share gains.

If you didn’t notice by Simon’s reference to reduced tax refunds, all of these statements I quoted above were taken from Wal-Mart’s Earnings Call Transcript from May 2013, all of them referencing the “bad weather” of last year’s winter. So, if we take their word that warmer weather created “unfair” base effects for comparison with winter 2012, then the comparison between winter 2014 and winter 2013 should be as close to apples to apples as it can possibly get.

For the current quarter, US comps were down yet again. But the blame continues to fall on the winter cold.

How, exactly, is cold weather to explain this:

A number of severe winter storms negatively impacted us during the quarter. A solid start to spring and a strong Easter drove positive comps in the back half of the quarter.

That is the same kind of rhetoric that is being used by corporate chiefs and economists everywhere. It was bad when it snowed, but got better once it warmed. How did that work out last year? The “back half” extrapolation was just as fallacious as it is now, but it sounds meekly plausible as if data backs up such optimism.

In the end, however, to take a page from Inigo Montoya, it doesn’t mean what they think it means. In other words, if winter were a valid explanation for weak results, as in delaying consumer spending, the snap back in the “back half” should be both “regular” sales and an added bonus of all those delayed sales finally taking place. The net across the weather beaten “front half” and warm and friendly “back half” should be positive growth. Instead, for two years running, the back half is only enough to keep sales overall from being a total disaster. That’s not quite what the weather explanation is designed to convey.

The broader picture shows very well the state of US consumers, particularly how it relates to cycles. Perhaps that provides a better, more complete and consistent (and logical) explanation for what we see out of the largest retailer. 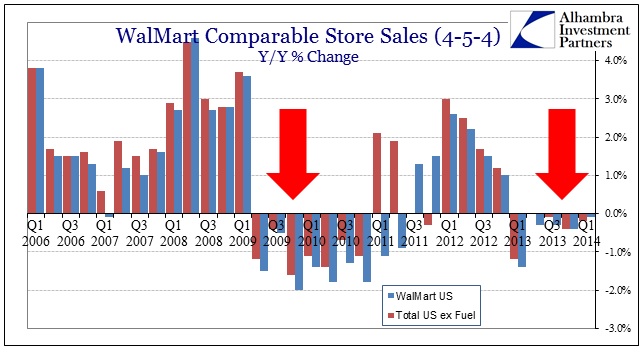