Dramatic Shifts In Dollars And Collateral

Dramatic Shifts In Dollars And Collateral

The global dollar situation continues to get muddied by divergent and apparently unrelated factors of significant scale. The Chinese are still not buying UST with nearly the same vigor that was very evident prior to the dollar travails last year (which I still believe is dollar liquidity rather than PBOC intent), while Japan and Belgium have suddenly found themselves infatuated with them, all at the same time Russia plays 1983 by unloading.

It’s not like the stakes could be any higher given the direct implications in both global trade and finance. The US$ still serves as the major nexus of both of those (we will see how recent attempts to bypass it work out – if they expand, or remain bilateral party arrangements sown on political rather than economic grounds) adding strong emphasis to US$ asset flows.

Clearly the interruption in dollar flow last year has abated to considerable degree; the task now is to determine by how much and whether the lingering negative effects still linger with sting. In my analysis, the dollar is still under some strain for global trading partners, and the primary evidence is that we have yet to see business as usual across the various TIC components. 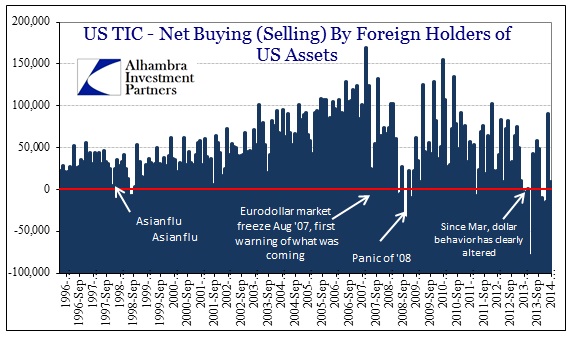 Again, caution with stale data applies here as these figures are for March. Where there was a buying binge in February, it very much abated the following month, complying with the recent pattern of volatility. On a rolling 6-month basis, dollar interest and availability appears to remain under pressure – with foreign central banks (“official”) very much looking like they are still providing dollars into the “market” even if they aren’t always UST mobilization (some agencies and even equities are being sold). 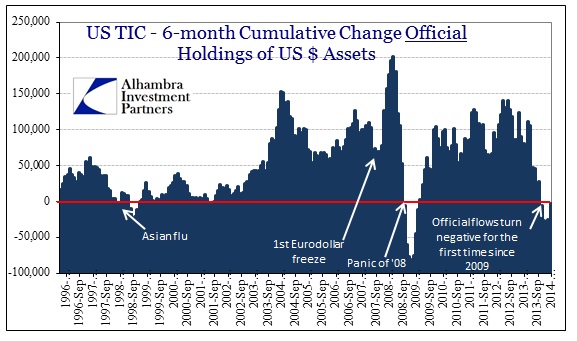 Given the intense and varied state of different geographical issues, breakdown by system provides what I think are some useful extrapolations – opening up some intriguing possibilities and interpretations. First, though, the overall figure of UST accumulation in the TIC statistics is, again, misleading. 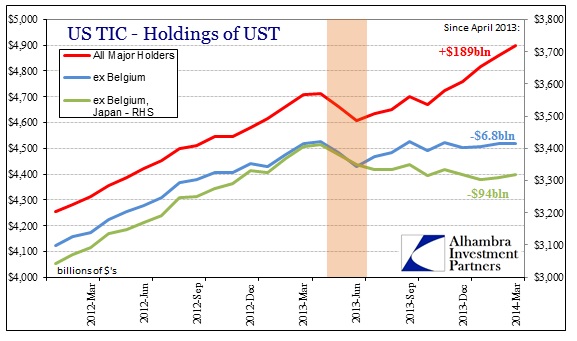 While foreign sources (both official and private) have added about $189 billion in treasury assets since the major selling in May and June 2013, that is aided almost entirely by Belgium. I will have more thoughts on Belgium below, but taking that country out of the equation (and Japan too) the dollar picture is far less evocative of “normalcy.”

To be sure, given the strained political situation of Russia vis-à-vis economically posturing with the West over Ukraine, I subtracted Russia as well as Belgium and Japan to fortify the funding market interpretation. Sure enough, there remains the obvious and significant inflection in UST holdings worldwide outside of the countries noted here. 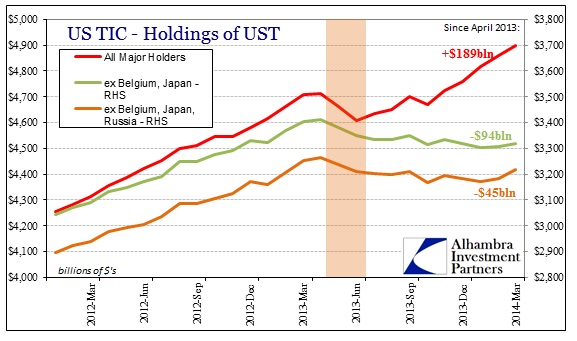 I take this data to mean that there still exist major and persistent dollar strains in emerging markets, including China. I don’t think I need to add any more commentary to that, given that is pretty much the same as the last six or so months, other than to note that it appears as if central banks have been successful to this point in pushing any dollar shortage to the dark spaces of these “markets.” For now, they remain very much obscured by what I can only describe as almost silent central bank dollar provisions. The main takeaway, however, is that such moves have only succeeded in concealment, not actual healing. 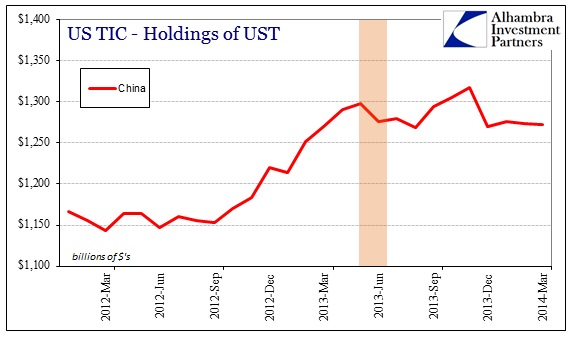 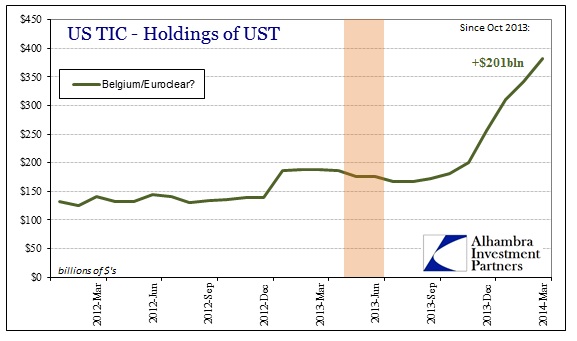 The Belgian issue, by contrast, seems to me a collateral feature of the changing market. The immediate question that is raised when confronted with this occurrence is, “why Belgium of all places?” Brussels is the seat of the Euro government and there exists significant financial infrastructure there, but I don’t believe this is a central bank issue. I have seen commentary lately that this Belgian buying of UST is a “quid pro quo” between the Fed and ECB, what amounts to a backdoor attempt at devaluing the euro. I certainly can’t dismiss it, as that would undoubtedly fall well within the devious manipulations that regularly pass for transnational policy, but I think there is another, more powerful force here.

The private firm Euroclear resides in Belgium as well. Euroclear is the largest clearance provider in the world, and it functions as the European equivalent of DTCC. That not only means clearing trades between buyers and sellers, but, far more importantly in my opinion, acting as a repository of collateral for derivatives and repos. The under-collateralization of “high finance” has been a major problem for some time now, but new rules designed to push more transparency into this space only enlarges that problem.

Still, that doesn’t suggest an obvious reason for the massive buildup of UST since last fall (really starting in November). It was just recently announced, however, that Euroclear and DTCC have created a joint venture to create greater efficiency with the global collateral “highway.” My own speculation as it relates to Belgium’s sudden inflow is that Euroclear partners and users have been adding UST collateral there to take advantage of (or being forced to) the new streamlining.

That does not preclude other interpretations. This could also mean European counterparties demanding more US$ denominated collateral for greater US interest rate risk. It could also be a response of Eurodollar banks in anticipation of ECB QE, which would very much disrupt euro collateral streams as well as potentially exchange rates. I also cannot dismiss the timing here, which coincides exactly with the ECB’s last rate decision – which has unleashed a unique sort of tightening on euro liquidity.

Whatever the ultimate driving force, I think a good case can be made that the Belgian “mystery” relates to Euroclear and thus collateral. It will take more research and observation to determine whether that is just a benign shift or flow, or whether there are broader considerations as it all relates, including the rest of the world, to total dollar conditions.