It wasn’t earth-shattering news to the broader stock market, but shareholders in ConAgra certainly took notice. The latest quarterly update, in anticipation of full quarterly earnings in a few days, was pretty bad. The packaged food company, that also processes and mills foodstuffs, “shocked” investors with both very weak results and an unanticipated writedown of goodwill. ConAgra has been on an acquisition spree over the past few years, no doubt as a result of what is denied in mainstream circles as “inflation.”

Looking back on the company’s results, I couldn’t help but think of it as the 21st century commodity price update of Major-General Stanley from Gilbert and Sullivan’s The Pirates of Penzance.

I am the very model of a modern Major-General
I’ve information vegetable, animal and mineral

Replace the word “Major” with “inflation” and that quotation sums up recent history for ConAgra – the very model of a modern Inflation-General. The commercial food business segment is in large part dependent on rising wholesale food prices, gaining considerable sales in 2011 during the “transitory” inflationary episode following QE2. 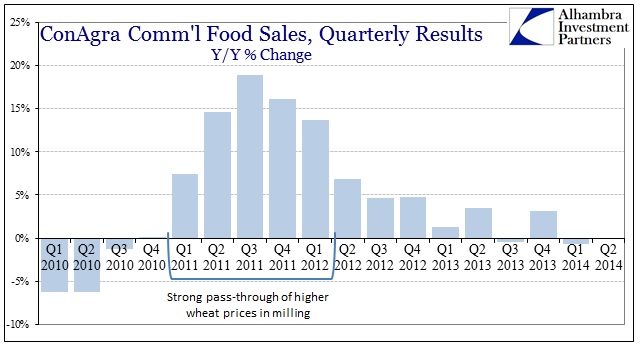 The trend here is as the consumer price index or the PCE deflator. But that isn’t the whole of the information in vegetable and mineral, as volume in this segment is trailing and falling too. So where 2011 was incredibly good in terms of both prices and volume, they have the “misfortune” of seeing less pricing power but also reduction in business. The timing of this changing character is the same seen elsewhere, as that familiar economic pattern once more emerges in the middle of 2012.

We don’t know yet what sales growth in the latest quarter totaled (the chart above is blank for Q2 ’14), as the focus of today’s warning was the sudden and stunning 7% drop in product volume in the consumer food segment. There was no estimate provided for sales growth in dollar terms, as there may have been some pricing offset to that volume decline as well as further growth from acquisitions. 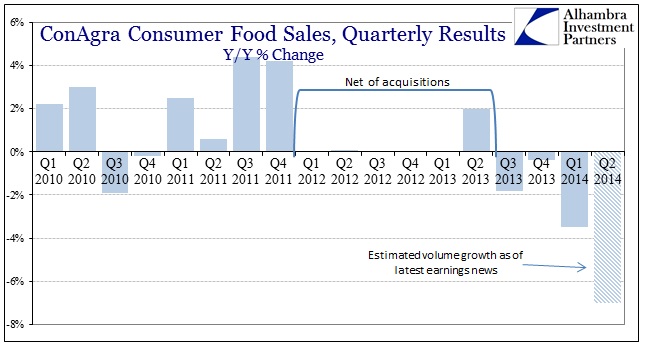 But where this is really interesting is the sales behavior during the slowdown period and how it relates to the intuitive and actual erosion of “inflation.” What was described by Ben Bernanke, then Chairman, as “transitory” may have been just that in a pure numbers sense, but if you study the business results here it becomes far more contoured. Throughout that middle part of the chart above, ConAgra derived all of its sales growth from acquisitions, as mentioned above. In each of those quarters, sales outside of recent purchases was flat – and only because price increases were unusually balanced with volume declines.

In December 2012, for example, in reporting its first quarter of 2013 (the calendar period for the 13 weeks ended November 25, 2012) the company noted the sales breakdown of its consumer food segment:

That occurred again and again, in almost the exact same configuration going for almost two years. Prices would rise, offsetting organic volume decreases and tasking the company with finding growth via financial means. But “offsetting” really isn’t the most apt description, as it really was more like “leading to”, as in prices would rise leading to organic volume decreases. In fact that matches up with personal experience of the time, including the “hidden” inflation of smaller packages of processed food sold for the same price.

Now the company is writing off that finance-driven growth, the hallmark of the asset inflation side of it. And what does this company do, in macro terms, with its declining volumes? They over-manage their costs, having already no interest in hiring new workers since there is less product to actually produce. This is the actual process of inflation in this environment, and it is wholly unlike what the monetary textbook preaches.

Is ConAgra just an anecdote, or is it like so many other actual, hard dollar results emblematic of the macro decay enforced by command? It isn’t hard to see why this very trend would lead to where we are now, a weakened economic state that has failed to “ignite” recovery time and time again, year after year. The accumulation of trading more dollars for less food is the very idea of impoverishment. You do that long enough across a wide base and eventually there is a breaking point (Golden Arches comes to mind here). ConAgra may be showing exactly that.

For the economy’s sake, I hope it’s simply a newfound distaste of Chef Boyardee. Economists will no doubt take it as Major-General Stanley, and follow their orthodox worldview of it as satire and comedy rather than actual enlightenment of accelerating economic decay gleaned from the company’s very basic position of animals, vegetables and minerals.