Inventory From Insane to Only Average

Inventory From Insane to Only Average

One of the primary factors pulling down the economy in the first quarter was, of course, inventory. There had been an epic surge in the middle of last year that made it all the way to Christmastime, only to have anticipated consumer strength “mysteriously” never appear. But that actually creates a bit of a misconception, as with a lot of facets of GDP accounting, that inventories actually shrunk during the -3% disaster. That was not the case at all.

GDP is a second derivative which means that changes in growth rates are what drive the figures. According to the BEA’s computations (which no doubt include imputations), private inventories grew by an astounding $144.8 billion in the third quarter of 2013 – leading to all those straight-line extrapolations of acceleration. As if that were not enough, inventory grew by a further $138.8 billion in the fourth quarter.

Whatever total pile of unsold items and material that businesses began the second half of 2013 on hand, it increased by an amazing $283.6 billion through the end of last year. However, because the rate of growth in the fourth quarter was slightly less than the third, inventory contribution to GDP was actually slightly negative despite being the second highest gross addition on record. Where inventory amounted to +1.67% of the 4.1% SAAR growth in Q3 GDP, it actually subtracted 0.02% in Q4.

In Q1 ’14, the growth rate of inventory fell from that $138.8 billion addition to only $62.9 billion. That was enough to subtract 1.7% from GDP, deepening the recessionary indication (as almost all recessions hinge on inventory), but that still meant inventories were growing at a rate not unlike all previous quarters of this recovery before the middle of last year. The average addition of inventory (in dollars; price changes are part of this) from early 2010 until the middle of 2013 was $60.4 billion. In other words, there was no inventory drawdown during the overdone “winter”, but rather inventory accumulation went from insane back to merely average. 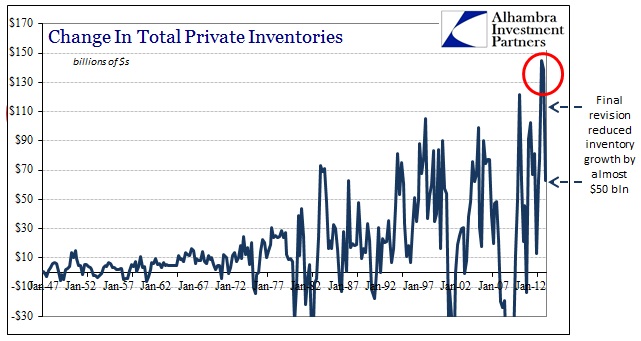 In the advance GDP estimate, inventory was estimated to have grown by a still-insane $112.3 billion. The revision of the inventory growth rate down to “only” $62 billion accounted for a lot of that downward GDP revision. It wasn’t farm inventory to blame, either, as for some as yet unknown reason there has been an enlarged and enlarging stockpile of farm product taking place steadily since the beginning of 2013.

That doesn’t really match what we see in other inventory indications and data series. In the wholesale/retail figures, for example, inventory growth has either accelerated noticeably (wholesale) or only fallen slightly (retail). 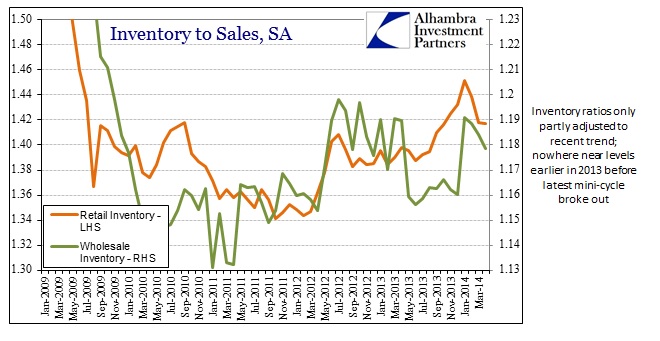 While the inventory-to-sales ratios have come down just a bit, in terms of raw growth rates there is nothing like what the BEA estimates of inventory.

On a seasonally-adjusted basis, the second derivative of retail and wholesale inventory in the separate series provided by the Census Bureau show a somewhat different identity and pattern. 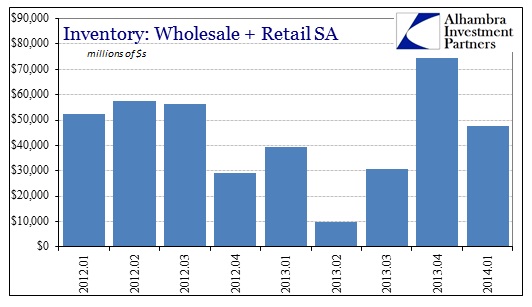 Whatever is actually taking place with inventory here domestically is still a tremendous issue – one that can hurt economically speaking even more despite cursory impressions of GDP “subtraction” in Q1. If you think that the economy is actually growing at a sustainable pace, then that opinion doesn’t apply, but it sure seems as if businesses were somewhat shocked out of such complacency in the first quarter. That would tend to suggest far less optimism and far more caution (even if the former does not yet fully replace the latter).

Where inventory goes from here will likely follow the consumer and not monetary direction. We don’t have enough inventory information yet for Q2 to render an opinion. As far as the sales part, it isn’t looking all that great. Without another attempt at monetary-driven psychology this year, second derivatives are likely to be challenging at best, making the uphill climb already facing the economy that much steeper.