Searching For Fail, and Still Finding It

Searching For Fail, and Still Finding It

While the credit markets were looking elsewhere these past few weeks, funding markets are again off their axis as repo fails spiked significantly one more time. The current level of fails is not quite that of June, but it is enough to engender some more pause about financial plumbing. 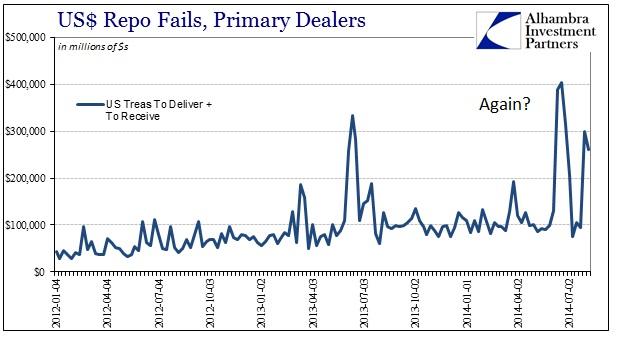 For the most part, explanations have been offered on the supply side, as in the supply of (lack of) collateral. QE has certainly played a large role with a direct impact on the availability of collateral supply. That wasn’t supposed to be the case as the Fed’s reverse repo program was supposed to alleviate any of these problems. Yet, here we are again wondering about the deepest reaches of financial funding in the wholesale banking system. 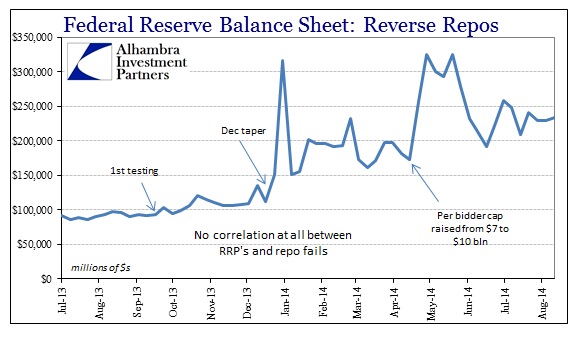 There is no short answer here, though I’m sure everyone wishes there was an easy indication. Looking at Primary Dealer holdings (inventory) of all manner of UST’s shows nothing much of a relatable phenomenon or movements. There is a very obvious decline in the inventory of t-bills, but that fits well within the recent paradigm of t-bill issuance and the Treasury’s variable deficit financing. 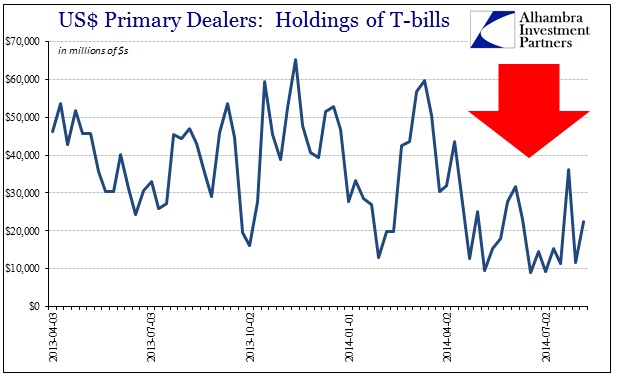 T-bill rates have been low, but nothing approaching persistently at or below zero which would be an obvious signal of stress with t-bills as marginal collateral. Most have surmised, myself included, that repo participants have been forced down the curve in search of larger stores of securities (supply side again) which is why repo trouble seems to be engaged in the coupons rather than bills (which was where most of history prior to the QE’s was focused).

Examining primary dealer inventory in coupons shows absolutely nothing as far as a detectable direct pattern. This is certainly not an exhaustive examination of what’s available, but dealers are going to be the largest and most flexible (that is their primary job) source of market collateral for repo. A 3% fail penalty, indeed any repo security trading deeply special, should be a very good enticement for collateral to flow into that breach especially in this day and age of financial repression through unendable ZIRP. 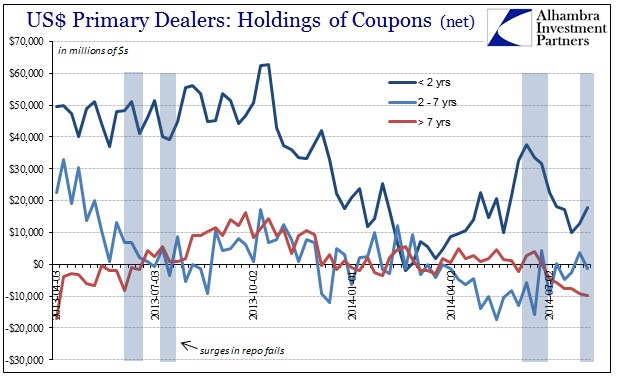 That has left many observers pointing the fingers at treasury shorts, as a large increase in short positions of any issue can affect its availability for repo usage. A gathering of shorts in a specific security used to be the primary reason for specials in the first place before broad collateral availability became such a pressing concern. That could still be a pressure, but there is nothing that indicates as much especially with the UST curve bear flattening consistently since November 20, 2013. It was a far more compelling theory in 2013’s repo problems as there were shorts lining up after hints of taper “leaked” out as early as February 2013 – which were ultimately proven “correct.” 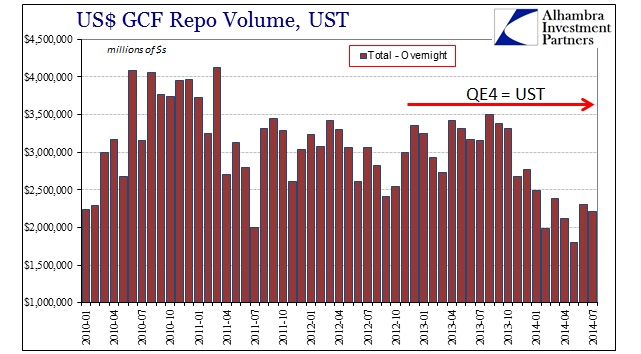 Instead, the repo market in 2014 looks like a shell of its former self. Repo volumes in UST have all but collapsed, now only about two-thirds of what it was as close as October 2013. That is a curious result itself given that the drop in repo volume in UST mirrors very closely the pattern in MBS repo. 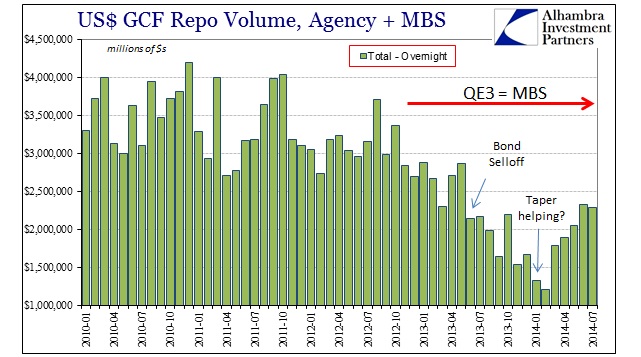 The primary difference, it seems, is that repo volumes in MBS have actually been somewhat reborn now that QE has been tapered quite proportionally this year. But that does not necessarily provide a ready answer for why UST repo would be so dramatically and relatedly affected.

I think part of that answer, and maybe a full part, lies in the reasons for the patterns as seen above. Going back to what I said last week about mortgage markets, banks holding inventory and engaging in new supply is not as simple as interest rate spreads. In fact, profitability in credit markets under ZIRP is as much price appreciation and trading than as any rate carry. Thus, when Bernanke broke with the prior paradigm of generalizing assertions of QE for something like infinity, the ensuing selloff wholly interrupted that profitability idea as it related to the “surety” of price direction. But, as we saw in MBS trading, there was little appetite to absorb the shock of price reversal as dealers were conspicuously absent in their role of “market maker.”

I think something similar has taken hold of UST’s as well, though not exactly in the same manner. The proclivity to hold even UST as inventory runs through not just capital considerations, but profitability too. We have heard all about the Dodd-Frank and Basel impacts on capital charges (more on that below), but dealers also have to consider the profitability of holding an inventory of any security or asset class. In UST, that was pretty much assured as interest rates kept moving lower, interrupted only briefly in between QE’s and other Fed intrusions. And we also have to consider volatility and its impact on risk-measures, and thus balance sheet capacity, not just in UST but all down the line in VaR and beyond.

After the major selloff last year, dealer inventories were certainly impacted in holding far less (net) of even UST. The large decline in dealer holdings of 2-years and less UST coupons lines up exactly with the results in UST repo volume. 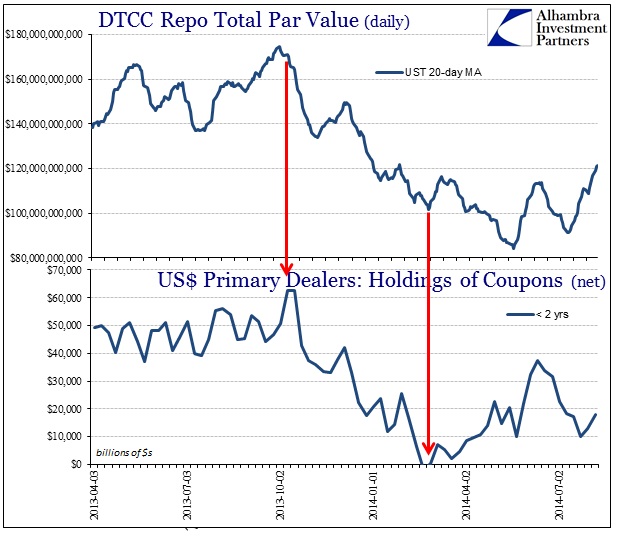 The mechanics of inventory holding were changing right through October, as rates were rising and the curve was drawing steeper (at least until November 20). There was also the problem of derivatives dealers taking a reverse in collateral calls as swaps that were once very favorable to receivers (banks and dealers) began to run in the opposite direction (though it is not clear how that might have effected collateral availability more broadly).

But there is another element at work that shows up in the chart above, in repo volume. In the last two (including the current) surges of repo fails, there is a noticeable uptick in repo volume into them.

That would seemingly indicate a sudden rise in demand for repo financing, with the overall implication that dealers were unwilling or, more likely, unable to add additional collateral capacity. The reason for the surge in demand is another matter altogether which only deepens the plumbing “issues” further (and thus I’ll save that for another time). The net result here is seemingly a funding system that has grown far more sclerotic and inflexible, which is a serious issue as prices and issuance go in the opposite direction of dealer capacity. If the repo market cannot handle a sudden rise in repo demand, and thus a demand for collateral, at this lowly level that suggests nothing good about the dealer-led system.

As a final reminder, this was exactly what the Treasury Borrowing Advisory Committee (TBAC) was warning last July. 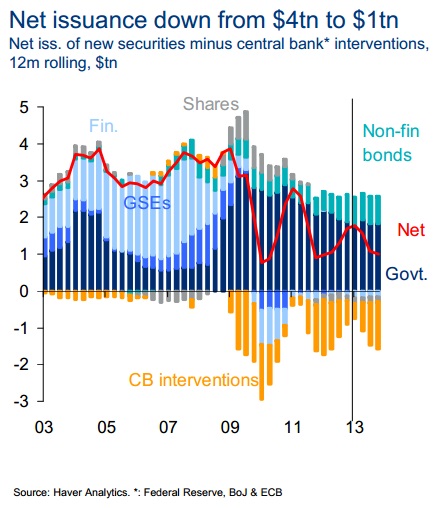 While they were primarily focused on, and overtly worried about, the divergence of dealer capacity in corporate credit and risk assets, the overall message still very much applies even if more broadly than examined then. In relaying, “Dealers can no longer afford to act as credit warehouses” and, “leverage ratios will leave dealers less willing to provide repo financing and to hold UST,” the TBAC seems awfully prescient right now. I think that the Fed-driven taper selloff further cemented those observations through changing the profitability and volatility paradigm fully, as there seems to now be a clear lack of marginal capacity to act in times of acute need – no matter how little..

That such a behavioral change may have “infected” the repo market only makes it that much worse. Liquidity is the one element that is so very difficult to understand and measure, and it is never about what you see today, it is more about when you need it. These problems noted here have all occurred under very benign conditions, which makes you wonder how “resilient”, to use Janet Yellen’s vernacular against her, markets have actually become with all this financialism. The hidden pockets of officialdom are already actively theorizing yet again, but where has that gotten us to this point? As Janet Yellen spoke of back in April:

Federal Reserve staff are actively considering additional measures that could address these and other residual risks in the short-term wholesale funding markets. Some of these measures–such as requiring firms to hold larger amounts of capital, stable funding, or highly liquid assets based on use of short-term wholesale funding–would likely apply only to the largest, most complex banking organizations. Other measures–such as minimum margin requirements for repurchase agreements and other securities financing transactions–could, at least in principle, apply on a marketwide basis. In designing such measures, we are carefully thinking through questions about the tradeoffs associated with tighter liquidity regulation that will be discussed at this conference.

It’s all well and good that they are “carefully thinking” about “tradeoffs” while the funding markets live its reality. One more time it appears that theory comes up far short as fail is all too ubiquitous.