With the latest release of the Treasury Department’s TIC statistics there is a lot about December now that makes sense. Much of what is contained within the figures matches the theories I put forward contemporarily, including the severity of the “dollar” problem that month (leading to any number of downstream effects, including seriously heightened bearishness in US credit markets) and Switzerland as a major focal point. In other words, global “dollar” liquidity was indeed the likely cause of so much discomfort and concern.

It appears as if central banks were again busy raising “dollars” in December, somewhat behind the problem as they always are. 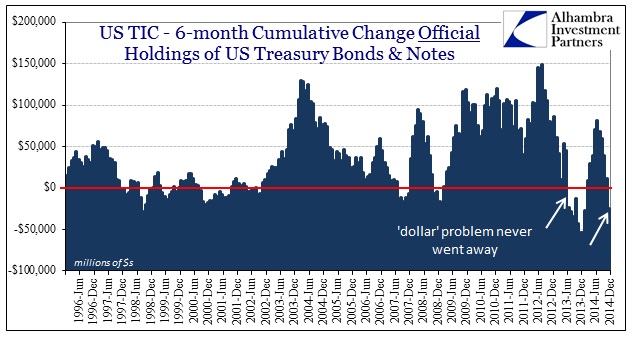 The two arrows on the chart above match up with first the taper selloff, which included global “dollar” tightening, and then the events that began in June 2014. What is amazing about December’s figures is that the banking system itself reported by far the largest monthly reduction in “dollar” liabilities on record. In fact, adding September 2014, we have seen very closely together the two largest declines in bank “dollar” liabilities going back to the origin of the series in 1978. 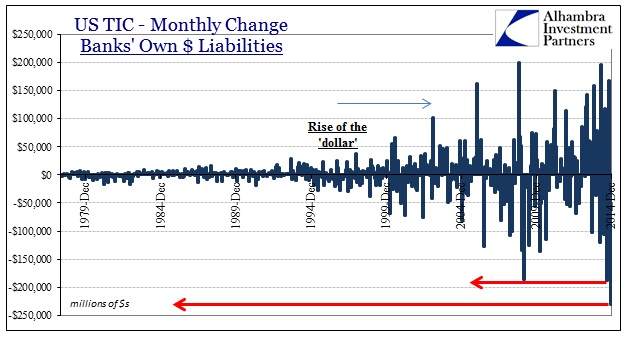 Again, that makes perfect sense within the perspective of drastic liquidity problems surrounding October 15 (large drop in bank participation in September preceding the event) and then again in December. All of which traces back to declining bank liabilities beginning with July – the “rising dollar.”

The behavior of banks in terms of these “dollars” shows a clear pattern of intrusiveness on the part of the Fed and, more importantly, the lack of durability of those monetary programs. This stop-go pattern is reminiscent of the 1970’s, so it is no surprise that instability is the constant feature of both periods. As I said this morning, it is difficult to see why monetary official insist that creating massive financial imbalances amount somehow to stability. 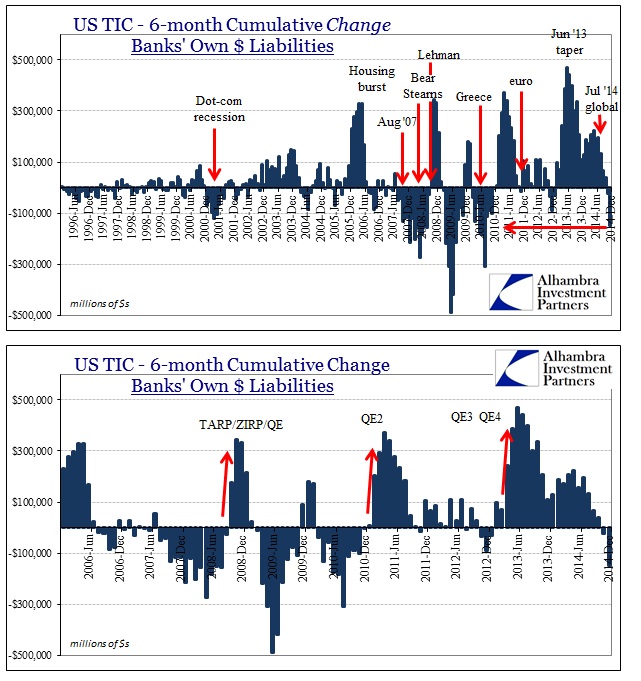 Going back to May 2013, it is clear that the disruption caused by changing perceptions about US QE opened a permanent rip in the behavior of “dollar” participants around the world. Though it has not been continuous, nothing ever is with ebbs and flows consistent with this kind of pattern, the “dollar” system’s problems in late 2014 are just another stage or leg in the decay that began then. 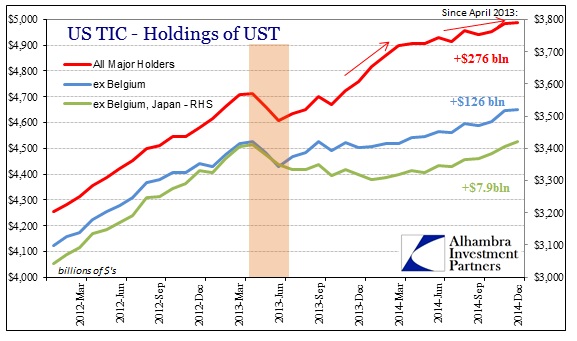 The nationalities most associated with currency crises, particularly Russia and Brazil, but also China and now Switzerland, are those with the largest changes in “dollar” behavior (caveat: TIC is only what we can observe directly, and there is more than that is so far unobserved; that may mean the TIC data is just coincidental in how it lines up with actual observations in market behavior, such as currency prices and credit market yields and spreads). 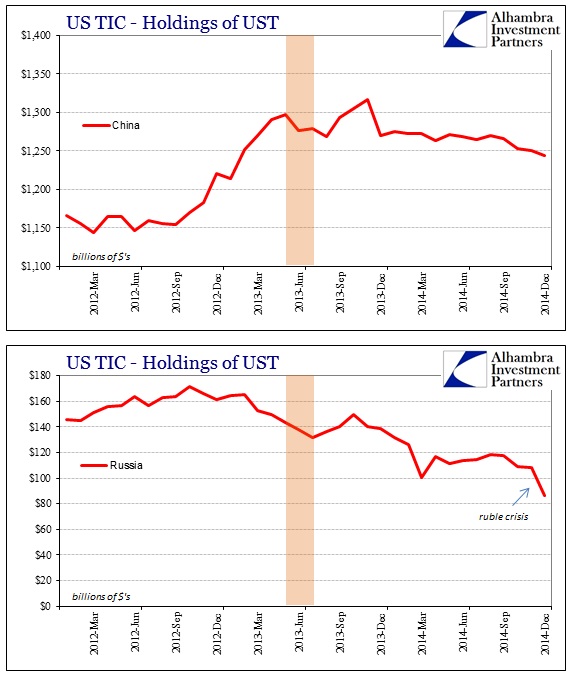 The most severe crisis for the ruble saw “Russian” holdings of UST drop precipitously in December 2014, while Chinese registrations of UST holdings continue to fall during the yuan’s “devaluations” last year. Even Brazil’s activities appear to match observations about both that central bank’s activities and ratcheting devaluations in the real. 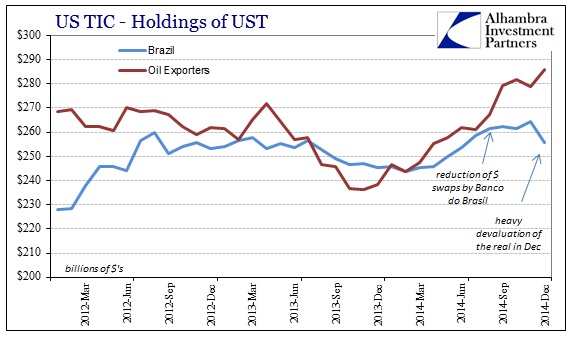 Finally, there is a clear “dollar” issue with Switzerland. Unlike other currencies, the franc and the peg to the euro mean that bank funding for the Swiss system operates differently than eurodollar participation of other financial firms of different nationalities. There isn’t much detail beyond the topline figures, but I suspect that the rise in Swiss holdings of UST relates to SNB “buying” UST from private Swiss sources, thus amounting to a “dollar” swap as private funding for Swiss banks became more difficult. 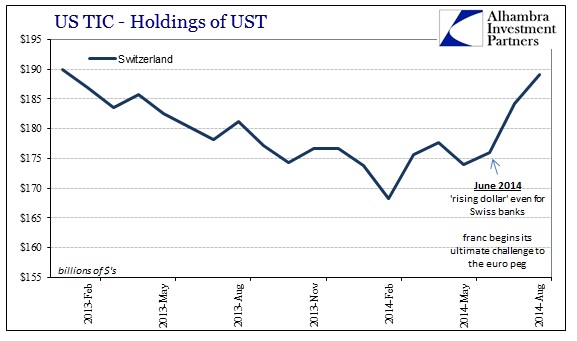 As the euro peg grew more “expensive”, as the euro devalued and brought the franc with it into January, the cost of such funding, private or otherwise, simply grew too much for Swiss banks to handle – even for a synthetic “dollar” swap.

In short, December was indeed a month of heavy illiquidity all over the globe even if the US was largely spared domestically in stocks and risky credit. The huge declines in UST nominal yields and yield spreads along the curve were symptoms of that, as well as were the major currency crises all through the BRICs and beyond. That includes, as I have no doubt now, the Swiss banking system which was in an impossible position given the SNB’s preference for the euro peg mismatch.

What is unstated or unobserved, of course, is “why.” I think there is a confluence of factors here that conspire to add amplification and asymmetry (on the downside) to all of this. First, the eurodollar system that ruptured in August 2007 was a permanent alteration to the global financial landscape. That much was probably unavoidable as the imbalance over MBS and credit bubbles in several places meant there was no realistic method of rebuilding fully what started to fall apart. With that in mind, the turn in the middle of 2013 against the idea of QE and the Fed’s resolve was likewise devastating to a system at least trying to handle maintenance of some order and function despite significant pressures almost everywhere (especially the real economy globally that never lives up to central bank promises, but to which a lot of financial resources are “bet” in that direction anyway – don’t fight the Fed using borrowed, rollover “dollars”).

And the last straw may have been the case of 2014 just moving too far in the negative direction. Economic growth nearly everywhere not just disappointed last year, which became clear and obvious around midyear, there was more than enough indication that the global economy was actually deteriorating. In terms of “dollar” funding, with perceptions of QE being altered by the change in 2013, “don’t fight the Fed” became something more opposite as in “don’t trust the Fed” on either its economic predictions or its intentions toward more artificial stability (oxymoron intended).

The result has been what we see clearly through TIC, as the global “dollar” short grew more and more untenable beginning June 2014. This reduction in “dollars” on offer from eurodollar bank participants are the “rising dollar” and all the downstream impacts of severe financial tightening.