The Shanghai Composite Index for shares on China’s somewhat stock market peaked on June 12, a Friday before a weekend in which every major analyst and China-watcher expected the PBOC to unleash rate cuts. It wasn’t a very good week in terms of economic data for China, which is likely why the call-to-action for the PBOC was nearly universal. For its part, of course, the central bank did nothing which was actually consistent with its prior behavior.

In the two weeks since then, however, China stocks have almost crashed and the PBOC did relent on rate action (more likely in response to the downside in stocks, rather than the economy). Even the China Securities Regulatory Commission (CSRC) offered what appeared to be relaxed rules on margin investing, but only from the “investor” side of the ledger. CSRC is proposing to alter Chapter 3, Article 11 of the Measures for the Administration of Margin Trading and Short Selling by Securities Companies which would no longer require a margin borrower to have a brokerage account open for at least 6 months before being able to obtain the debt. The rule change, should it become effective, will also remove the requirement that margined accounts be placed in third party escrow. Further, margin loans were restricted to a hard six-month maturity, but rollovers are now likely to be allowed.

Where that may make it easier for individuals to access margin available, the rules changes for brokers and banks extending it seem to be moving in the opposite direction. Limitations for total capacity to stock margin is being considered capped at four times net capital. There isn’t any hard data as to how much of the reported $358 billion in margin debt in China might be above that threshold, but we can take the trend in stocks during this “discussion and comment” period to mean that quite a bit is. These proposed CSRC rules were posted on the agency’s website, only in Chinese, on June 12. 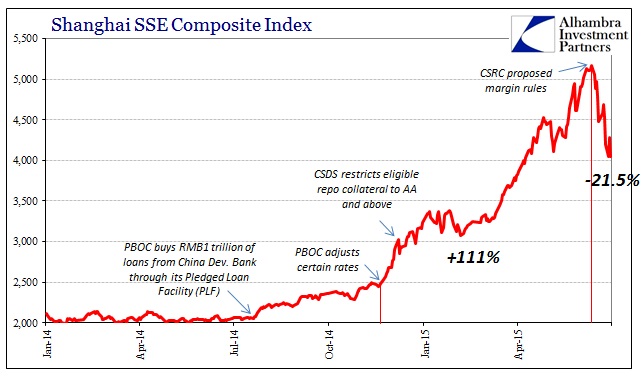 In other words, it appears more likely that selling in Chinese stocks is being driven from the debt “supply” side as opposed to changes in individual preferences. Banks more likely are calling back margin debt to more closely align with the CSRC, which then leads to the snowball effect of margin calls upon margin calls once share prices are easily overcome by the lack of robust liquidity.

There are other factors to consider, too, that make for a dangerous liquidity environment. The LGFV “swap” is, on net, a major factor in draining liquidity out of banking in the aggregate. The Local Government Financing Vehicles were the primary source for municipalities to participate in the intentional debt bubbles of 2009, as municipalities were/are restricted by legal debt covenants. Since LGFV’s were/are off-balance sheet, the amount of debt in them was not capped by existing government rules. Over time, the saturation became immense so that the combined property and economic slowdown has taken several toward danger of violating further laws and restrictions, as well as even some talk of missed interest payments and perhaps even some kind of technical default.

The “swap” idea was where local governments would pay off what was typically high-interest debt of the LGFV’s by floating regular muni bonds, guaranteed unlike the LGFV loans and bonds, at a small spread to central government rates. Chinese banks are required to underwrite munis anyway, but the central government compelled state-owned banks to buy the swapped bonds. The PBOC then acted to allow the new issues as collateral for ultra-low cost funding to somewhat offset the change in interest income. The result, however, is a kind of debt-restructuring for the banking system which in the end may be “requiring” too much internal resource allocation.

The Chinese bond market was in a sharp selloff prior to June. The yield on the central government’s 5-year bond reached 3.30% on May 29, as banks were clearly hit with what was in effect a major increase in “supply” via the LGFV swap. If liquidity and balance sheet capacity was seriously drained by then, the June 12 proposal for margin debt would have been that much more distant. Thus, I think, the selloff as a near-crash:

“I think this [rate cuts] is the right dose of medicine,” said Hong Hao, chief strategist with BOCOM International. “The recent slump was largely driven by margin calls, so if brokerages don’t force liquidation … the market slide should be stemmed, at least for now.”

But what if that was the whole point to begin with? The PBOC was well-aware of what the LGFV swap was going to do to bank capacity, and was very likely consulted about the CRSC margin proposals on the broker/bank side. In short, they had to know that the net result would be less liquidity in the system, including and especially credit and debt for the stock market speculation – and not by a little. That raises the contention as to whether the combined effect was intentional as directed, even as a tangential to the primary goal of bank restructuring, against the rise in the stock market.

Going back to early 2014, that has been the pattern of the PBOC’s reform agenda – they “tighten” and then a little later come back with some form of partially offsetting “loosening.” In this case, the latter was much greater than the recent past because the reaction in share prices was probably far quicker and more violent than expected by all of the central authorities. That has been the greatest danger in trying to “undevelop” asset bubbles to begin with. The stock surge tracing back to the PBOC’s efforts at draining speculative credit was very likely an unwelcome development as squeezing a bubble leads to breakouts in other areas, forcing even greater pressure on the financial apparatus to act with more and different forms of restriction; increasing the risk of something going wrong somewhere else.

The PBOC has been able to pull back from the brink before, in terms of asset price movement maintaining an orderly withdrawal, but this might be different as stock trends are often very volatile and unpredictable. It was a long shot that the PBOC was going to be able to pull it off without disorder and disruption, so that is the great relevance now of the stock bubble in China. The worse it gets, the greater the likelihood of a much larger and more dangerous “event.” I never though the PBOC had much chance of making it through unscathed, especially with the economy so precarious, but the probability seems even slimmer now – if the stock bubble doesn’t do it here it at least represents the untold difficulties that simply appear and occur from even trying.