You Can Actually See The Desperation

You Can Actually See The Desperation

Why was Janet Yellen’s speech yesterday so highly touted? My last post might be more relevant to that appearance than what is presented here. After all, each FOMC meeting begins with a presentation from the head of the Open Market Desk usually pertaining to comprehensive liquidity (or as much as the orthodox view of it allows). For all the smiles and assurances, even the FOMC is somewhat cognizant of global dealer distress.

Beyond that, it is obvious that Yellen’s chief objective was to substitute inflation expectations for solid and inarguable economic growth right now. That is, of course, why the FOMC delayed last week so she has to reassure “everyone” that right now isn’t important and that, yet once more, the future is everything. Since “inflation” is one of the stated dual mandates, and where an “exit” will most heavily determine, it makes sense that Yellen would spend a lot of time on how her read of future inflation leads to the conclusion that the Fed will have to raise rates soon (even though we have heard that before, over and over) and further extrapolates backward to “even though it doesn’t look good now, it will in the near future.”

In a speech on Thursday at the University of Massachusetts in Amherst, Ms. Yellen laid out a detailed case for raising interest rates later this year.

Today’s trading is a microcosm of how upside down everything (economy included) has become of late (especially after the events of August). Where once stocks were heavily sold on even the slightest hint of a rate increase (anyone recall Yellen’s first press conference?), they now cheer it as if complete redemption and reassurance. It must truly be bad for “markets” to cling to that as a rationale for buying out of the current and persistent price slump.

Her speech is rather long and it is littered with footnotes and drawings, but the important parts really break down to two subjective claims. 1. Long run inflation expectations continue to be anchored at 2%; 2. Given that baseline, deviation from it is “transitory” (a word that appeared five times in close succession when she dealt with current factors).

What about the determinants of inflation’s longer-term trend? Here, it is instructive to compare the purely statistical estimate of the trend rate of future inflation shown earlier in figure 1 with survey measures of people’s actual expectations of long-run inflation, as is done in figure 5. Theory suggests that inflation expectations–which presumably are linked to the central bank’s inflation goal–should play an important role in actual price setting. Indeed, the contours of these series are strikingly similar, which suggests that the estimated trend in inflation is in fact related to households’ and firms’ long-run inflation expectations. [emphasis added]

The key word in all that is “presumably.” The “evidence” she cites is rather loose, ignoring market versions of “inflation expectations” in favor of (I am not making this up) a straight line at 2% supposedly determined by “professional forecasters.” That must be the easiest money ever made, since apparently all it takes is to draw sideways at wherever level Janet Yellen tells you no matter how that never seems to actually occur. Circular logic infests orthodox monetarism, but this might be the most egregious example – “professional forecasters” believe a central bank is effective over time so they produce forecasts based solely on that belief which is then used by the same central bank as proof that it can maintain “long run expectations.” 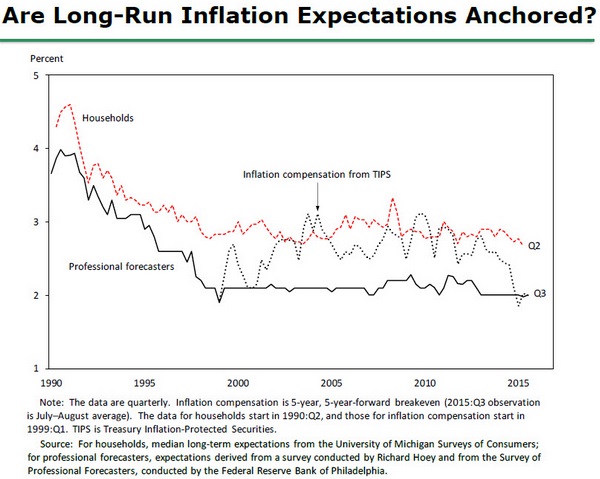 This is ground I have covered before, namely that she is setting up “survey-based” measures of inflation expectations as vastly superior (and thus “correct”) to market-based; a point that she clumsily stands upon yielding instead little more than her weak hand:

The fact that these survey measures appear to have remained anchored at about the same levels that prevailed prior to the recession suggests that, once the economy has returned to full employment (and absent any other shocks), core inflation should return to its pre-recession average level of about 2 percent.

This conclusion is tempered somewhat by recent movements in longer-run inflation compensation, which in principle could reflect changes in investors’ expectations for long-run inflation. This measure is now noticeably lower than in the years just prior to the financial crisis. However, movements in inflation compensation are difficult to interpret because they can be driven by factors that are unique to financial markets–such as movements in liquidity or risk premiums–as well as by changes in expected inflation. [emphasis added]

This is the mind of an academic, filled with equivocation about ceteris paribus. As the “dollar” has clearly shown in these cycles (perhaps supercycle), liquidity and economy are not separable. The “dollar” drives down oil prices, roils asset markets and currencies all over the world and suddenly the economy is no longer so certain (in her mind; worse in forming perceptions) but none of those are related? It would be a logical stretch even under actually benign conditions, but in September 2015 with the financial world still bombarded by maintained duress and the economy looking at least shakier with every passing data point this is deliberately obtuse.

That much is clearly recognizable because market-based inflation indications have crashed again, so we must have some academic basis for further ignoring how those have actually been correct so far. Even the Fed’s own preferred market indication of inflation expectations (the calculated 5-year/5-year forward rate) dropped yesterday to its lowest level since August 2010 when Bernanke was at Jackson Hole. It is important here to revisit that speech since long run expectations are supposed to be the defining program for the Fed’s expected economic trajectory:

First, the FOMC will strongly resist deviations from price stability in the downward direction. Falling into deflation is not a significant risk for the United States at this time, but that is true in part because the public understands that the Federal Reserve will be vigilant and proactive in addressing significant further disinflation.

Against Bernanke’s August 2010 promise, the Fed has not met its inflation target in more than three years; but “transitory” and professional forecasters? 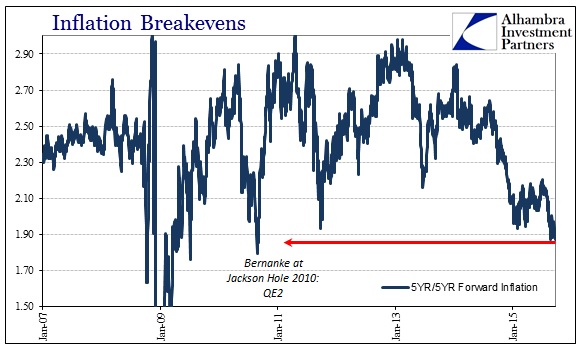 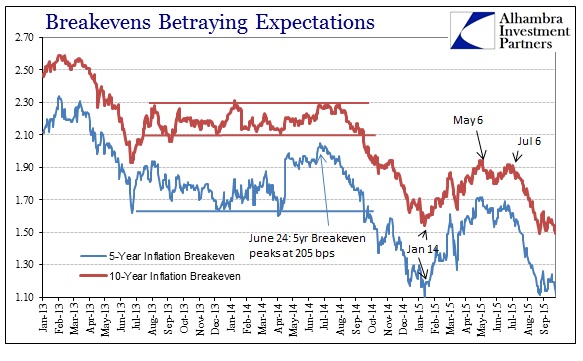 Summing up Yellen’s position: we are to believe economists who do nothing more than parrot the Fed’s claimed ability to target 2% inflation even though they haven’t been near that target in more than 3 years and the actual market for fixed income and such is crashing its forecast for inflation once more? Cutting, then, through all the needless complications of academic economics, it is perfectly plain that Yellen and the Fed are desperate (maybe that is why the emergency medical issue?). Her speech, upon examination, presents nothing new that hasn’t been already contradicted by not just events this year but her very own (in)action! If she truly believes in “professional forecasters” and the 2% anchor then rates would have followed the dots set out in March 2014.

There was one bit of unintentional high comedy, though germane to my interpretation of palpable orthodox anxiety, amidst all the dressed leftovers. In referring to the suite of policy programs unleashed since her predecessor’s own promises to be able to position the Fed to forestall any crisis disastrously proved insufficient, Yellen cites a recent Fed paper that (again, I am not making this up) suggests, mathematically no less, the deviation between monetary policy promises and actual economic (and financial) underperformance is nothing more than time; a whole lot of time.

Our analysis implies that the peak unemployment effect—subtracting 1¼ percentage points from the unemployment rate relative to what would have occurred in the absence of the unconventional policy actions—does not occur until early 2015, while the peak inflation effect—adding ½ percentage point to the inflation rate—is not anticipated until early 2016.

It’s wonderfully convenient, written in January 2015, that the full effect of QE’s and ZIRP wouldn’t actually show up until just a few months ahead of where we are now. That certainly settles it; the markets can ignore everything going on, the true monetary utopia was really set for early 2016 which is what Janet Yellen has been saying all along. The fact that the paper was published this January rather than January 2009 or even January 2013 is all you need to know about its regressions and 23 pages of tables and charts derived therefrom.

You could have skipped the entire speech as it, and all that was presented with it, sums up exactly as I suggested above; they are backed into an “unexpected” corner and have nothing else to offer at this time but to reemphasize with charts and “studies” the same bland platitudes that have already been thoroughly disproven time and again. Markets are likewise desperate, so a lot about yesterday and today actually makes sense.