Swap Spreads Refute Not Just Recovery, But Economics as a Science

Swap Spreads Refute Not Just Recovery, But Economics as a Science

Economics is a not a science. It tends to emulate the appearances by which outwardly hard sciences project in terms of rules and especially mathematical complications, but it does not conform. Karl Popper observed in 1972 that, “Whenever a theory appears to you as the only possible one, take this as a sign that you have neither understood the theory nor the problem which it was intended to solve.” Unfortunately, he also noted that, “no rational argument will have a rational effect on a man who does not want to adopt a rational attitude.” If you start from a preconceived notion and instead fit data to the theory, or attempt to do so, such is an action of bias; in economics that has taken religious proportions.

In this specific instance, I write not to refer to some relative triviality such as trend-cycle components within the BLS’ Job Openings data point, but rather the entire theory of monetarism itself. At the FOMC meeting in June 2003, a gathering that I have referred to time and again for good reason, Alan Greenspan specifically stated the orthodox understanding of monetary influence, all in the context of extenuating monetary circumstances (a threshold crossed only a few years after his unwavering declaration):

It’s really quite important to make a judgment as to whether, in fact, yield spreads off riskless instruments – which is what we have essentially been talking about – are independent of the level of the riskless rates themselves. The answer, I’m certain, is that they are not independent. But how their dependency functions and how those spreads behaved in earlier periods is something I think we’ll need to know more about.

The theory of QE is thus contained in this one paragraph; for if the central bank can influence the “riskless rate” they can influence everything thereafter. The reason for that theory of precision and control follows from the Fisherian inference of interest rates themselves as a basic, economic construct – that all investors behave as if there is a minimum interest rate and follow from that a positive spread for various attributes of risk. Because of this notion, central banks further believe preciseness because they think they can influence now both sides of that theoretical rate mechanism – the “riskless” portions, as QE buying of UST’s, and those spreads themselves (inflation expectations, for one).

However, economists take no note or gain no inquisitiveness on actually how that might work; it is taken as an article of faith that it just does. Even Greenspan above demonstrates that point, raising the question before dismissing as, “I’m certain” “that they are not independent.”

There is so much contained in one untested assumption that it is easy to understand why monetary economics failed so spectacularly in 2008. As Greenspan’s successor, Ben Bernanke, has proclaimed recently, central banks can use monetary policy to mitigate the effects of recession without ever answering where he was in that regard in 2008. Monetary policy is so powerful, yet absent the very moment it was needed most. Perhaps it just doesn’t work as described?

To take Alan Greenspan at face value in 2003 is to assume hard lines of almost physical proportions. It’s as if he expected some Risk Fairy to enforce the riskless boundary should any trader at any station upon any bank desk, in good standing or athwart open disorder, violate this sacred monetary belief. I make such an absurd suggestion because it is not a suggestion, it was actually observed starting in October 2008; another point that I have referred to several times recently as the whole of the fixed income apparatus is again alight with mystical confusion.

It’s hard to overstate how illogical it is when swap spreads are inverted. That’s because it suggests that governments are less creditworthy than the very financial institutions they bailed out during the credit crisis just seven years ago. And as the Fed prepares to end its near-zero rate policy, those distortions are coming to the fore…

As the phenomenon becomes more widespread, it adds to evidence that it’s not just a one-off, according to Priya Misra, the New York-based head of global interest-rate strategy at TD Securities, another primary dealer…

“This is not really just a somewhat esoteric story about interest-rate derivatives,” strategists led by Joshua Younger wrote in a Nov. 6 report. “Moves in spreads should be viewed as symptomatic of deeper problems.”

A negative swap spread violates, directly, Greenspan’s core monetary assumption. It tears apart the rigid construction of interest rates and the spreads by which they are supposed to be governed, and thus made governable. It is, in a word of science, a direct observation that violates that very unscientific, and subjective, monetary supposition. It has become prevalent again in 2015 just as it was systemically upsetting back in October 2008.

To see the swap rate trade below its equivalent UST was akin to holy financial blasphemy; it triggered an unending stream of confused consciousness that groped for some kind of window back to the safe reality that had once, seemingly long ago by that point, existed. A very big clue would surface just the next day, as stock markets all over the world crashed yet again on October 24. The S&P 500 was down more than 3.5%, with the DJIA off more than 500 points at the low. The NASDAQ would finish that week off just about 10%, making it -30% for the month of October.

Economists start from the premise, this year as then, that the financial system cannot possibly be under such heavy and sustained duress. Janet Yellen has told them, and as the high priestess of monetary theory, only those credentials are required, over and over that the Fed’s grand actions have solved all imbalance and restored all good working order; in finance as well as related economy. Thus, the very appearance of the offending numeric in negative spreads is treated as some exotic disease unrelated to the wholesome condition of the host. To preserve the legend of the monetary solution at all costs requires, demands, illogical interpretation of just such observation; the theory must be maintained though it has been thoroughly disproved – twice (at least). 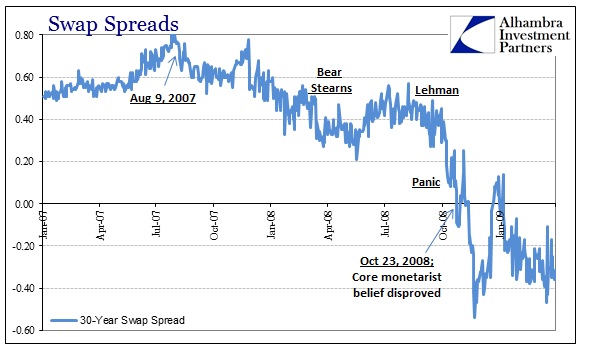 Because of this, the mainstream refuses the most obvious and consistent analysis because they start, and end, from Yellen’s premise. It doesn’t matter that all observation, beyond swap spreads, is confirming the “impossible” action because Yellen’s view is orthodox law. How many “unexpected” financial irregularities does it take to even open the possibility that Yellen is wrong? For starters, we have already tread this ground in 2008, where all such irregular observation was discarded to credentialed assurance in the form of Bernanke’s great and costly mistakes. He was equally sure that great financial difficulty was a low probability despite all the signs that persisted and amplified then.

In the past year or so already, there was October 15 last year, the ruble crisis in December, the Swiss National Bank’s “dollar” destruction of January 15, the (ongoing) crash in oil, copper, commodities, the sudden “devaluation” in China that was instead a “dollar” run which only a few weeks later led to global and alarming liquidations in almost every financial asset. And the global economy that suddenly behaves exactly as you would expect given these financial irregularities, leaving the FOMC and policymakers to rest the whole of their assumptions upon only “professional forecasters” for inflation expectations that haven’t been met since the last Presidential election season. That’s an enormous catalog with which to ignore.

Instead, the most that can be uttered in amazing wonder is “regulations”, attribution of intentional purity as well as, more importantly, benign instructiveness. This blindness has now bordered upon hysterical:

“What there doesn’t appear to be is any single smoking gun that says why swap spread changes have been so dramatic,” said Thomas Urano, a money manager at Sage Advisory Services Ltd., which oversees $11 billion. The big question remains whether there is “something bigger brewing under the surface that so far hasn’t been pinpointed yet.”

It takes all of a few seconds to visit actual bank balance sheet reporting, or even the various derivative aggregations from the Office of the Comptroller of the Currency or Bank for International Settlements. In any of those there is a smoking gun (below), in fact a whole array of smoking guns, to add to the further a full confessions from each bank as to why they have committed such orthodox befoulment. The FICC system that supported the actual financial system as it operated, not as was theorized about how that might be, generically, is being dismantled and being done so at a quickening pace. Not only does that fit easily with the various and broad global observations I noted above, it also defines quite easily the appearance and swell of negative swap spreads not just in various US$ maturities but now across the entire world.

This is so incredibly simple and easily experimental as to provide all the evidence ever required as to why economics has it all so wrong.

Banks have announced, consistently and continually, since 2013 that they no longer wish to dedicate resources to FICC not as a matter of regulation but as a matter of profit. And because of that linkage it must not be allowed into the orthodox equation – it obliterates the idea of recovery from within the one place that is supposed to have been the greatest and most visible monetary policy success. Economists can’t have that. Observation is denied and instead we are substituted inanities and absurdities. Economics is not a science. 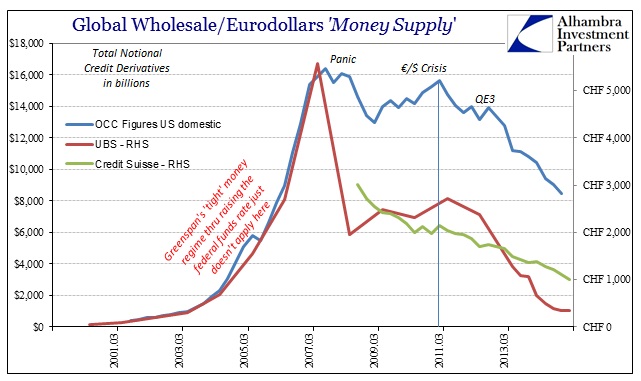 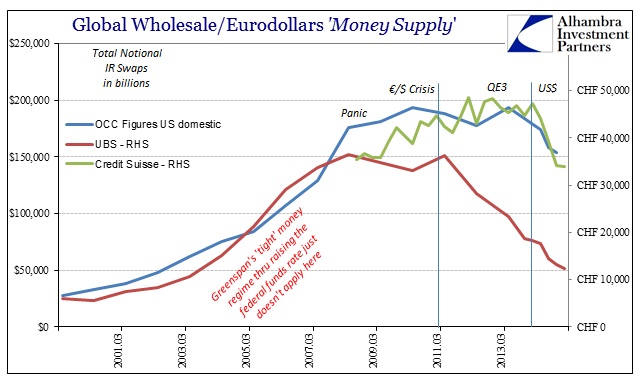 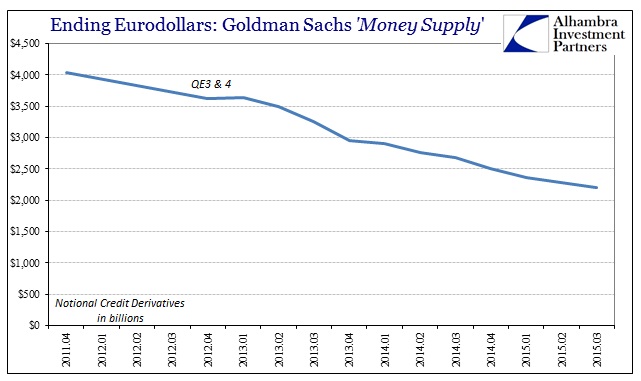 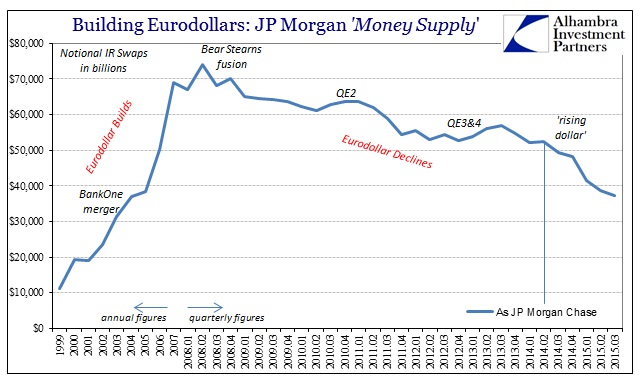 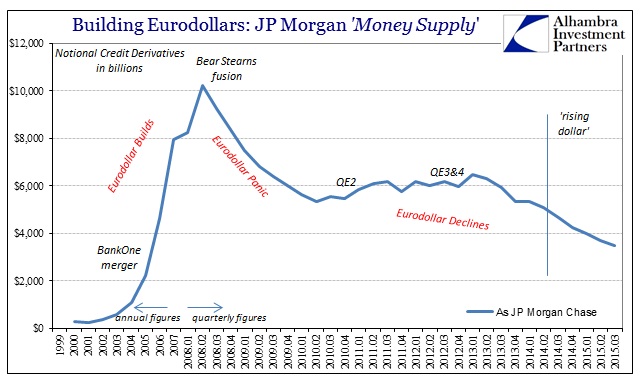 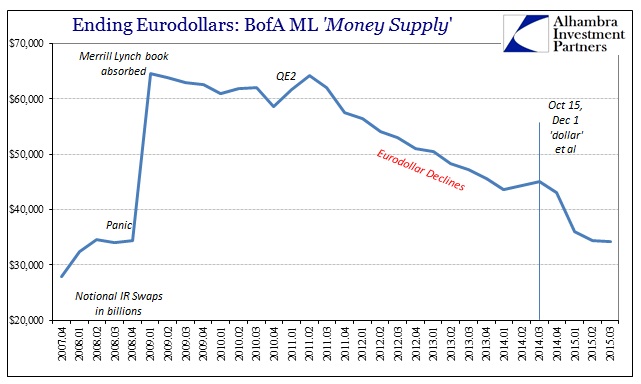 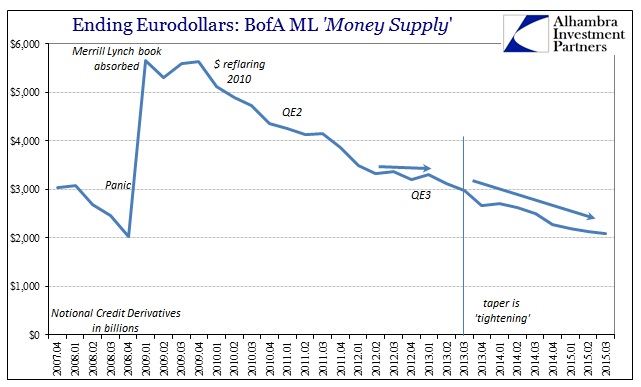 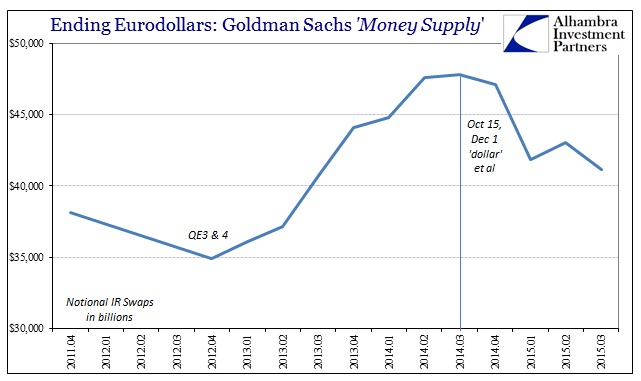