Despite the disappointing headline Establishment Survey estimate, those inclined to believe the payroll report as an overall economic narrative had two fallback issues.

U.S. employment gains slowed more than expected in January as the boost to hiring from unseasonably mild weather faded, but surging wages and an unemployment rate at an eight-year low suggested the labor market recovery remains firm. [emphasis added]

The first was the unemployment rate as it supposedly projected the economy at or tantalizingly close to full employment. The fact that even the mainstream conversation has turned more toward recession in 2016 than additional FOMC “rate hikes” makes that an almost impossible assertion right from the start. However, the view behind the unemployment rate leaves no doubt.

As to “surging wages”, that is likewise relatively easy to dismiss and on several fronts. First of all, as noted with the broad account of the CES, monthly variation is rather extreme so any one month of gains should be taken with full caution and skepticism. That is especially true of any purported wage gains in the month of January, particularly January 2016 as somewhat different than January’s past.

As the United States marks more than six years without an increase in the federal minimum wage of $7.25 an hour, 14 states and several cities are moving forward with their own increases, with most set to start taking effect on Friday.

California and Massachusetts are highest among the states, both increasing from $9 to $10 an hour, according to an analysis by the National Conference of State Legislatures…

With Friday’s increases, the new average minimum wage across the 14 affected states rises from $8.50 an hour to just over $9.

As was learned relatively quickly via WalMart’s experience with its wage hike, the more relevant factor to overall economic advance is not the wage rate but the net effect on total income. The true minimum wage is, after all, zero. In some places such as Oakland, individual municipality treatment of the wage mandate seems a likely factor in distributing these basic economics.

“This in [sic] is the busiest one. Everybody I know comes here,” explained Francesca Cataldi, also [sic] avid Walmart shopper.

The Walmart is in City Councilman Larry Reid’s district. He wonders if an increase in the city’s minimum wage is a likely reason for the closure.

“They wouldn’t go into any specific details in terms of their rationale for closing the store. But this store has been very successful for Walmart,” said Reid.

The BLS does not give us any insight into how much minimum wage changes might affect the overall wage rate estimate for each January (or July, as is often the case for statutory implementation), but we have to assume that the inclusion of large states such as California would have at last some minor impact. If that is so, then some part of these wage gains, should they prove anything but just statistical variation, are not the foundation of what the FOMC is expecting.

But that isn’t really the main objection to “surging” wages so much as there isn’t any actual evidence that wages are doing anything like that. Even including January’s variation, wages and earnings have been stuck in the same rut that has defied monetary imagination and intrusion this whole “recovery.” Nominal weekly average earnings for production and non-supervisory employees gained 2.5% year-over-year in January 2016 compared to 2.9% in January 2015; or 2.5% in January 2011 and 3.6% in January 2008. 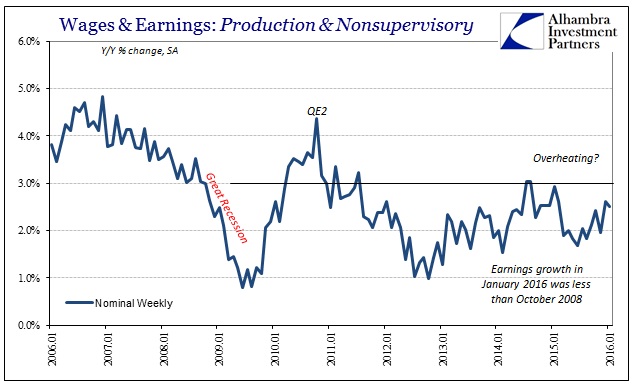 This is the same description of wage growth as presented in the Employment Cost Index as noted yesterday, where employment compensation, including benefits, has not surged or much changed at all. 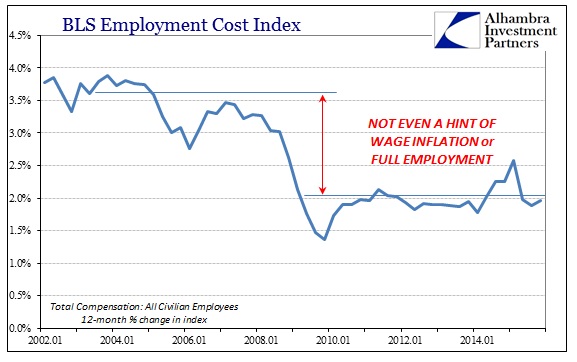 This “mystery” has left economists to admit that wages aren’t providing their needed narrative support, but no matter how long that wages remain so deficient it does not shake their religious faith in their preferred interpretation for the overall employment numbers. From last week:

“The labor market over the past year has shown several signs that wage acceleration was just around the corner, but it hasn’t materialized yet,” said Thomas Simons, a money-market economist in New York at Jefferies Group LLC. “With every passing month, we get more signs that it will come at some point.”

The only possible sign of wage or earnings growth has been real average weekly earnings; the series that takes into account the CPI. Rather than signal that wages are gaining in the manner suggested by monetary policy expectations and the unemployment rate, the gains in real wages actually show that economic theory doesn’t account for much. In other words, real wages have been rising due solely to the commodity price crash especially energy prices. This is the “tax cut” type boosts that economists were routinely proclaiming about a year ago. 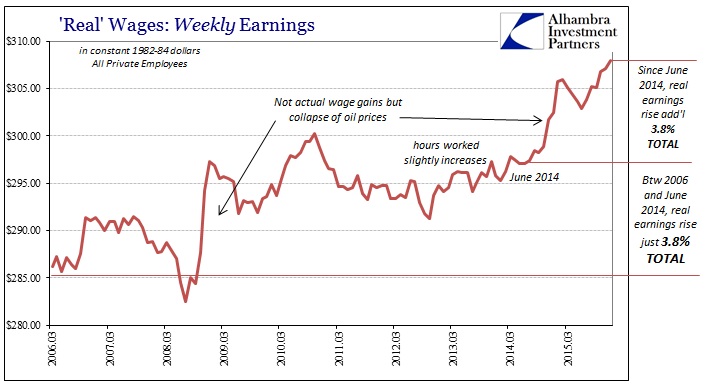 In relative size, it has been rather large. Average earnings rose just 3.8% total (not annually) from early 2006 through June 2014 when the “dollar” started to make serious financial noise. Since June 2014, real average earnings rose another 3.8%; and yet all indications about consumers and spending have turned instead recessionary at the exact same time as this oil “tax cut.” It wasn’t hard to figure that might be the case, given that this is a repeated circumstance. During the worst of the Great Recession, real average earnings likewise surged and consumers responded in the same contradictory fashion.

Nominal earnings matter as do economic circumstances beyond these kinds of indirect calculations. Spending didn’t surge from the middle of 2008 forward because everyone (but economists) could sense “something” was amiss. Oil price crashes, for one, don’t occur in the best of times. Further, these earnings calculations are for individual employment circumstances, and thus do not take into account overall national income. In 2008, that meant rising weekly earnings for some, but increasingly zero wages (and a trip to the unemployment line) for millions of others.

We aren’t in those kinds of circumstances (yet?), but wage growth or stagnation will not be the deciding factor or really much of a forward-looking indication. 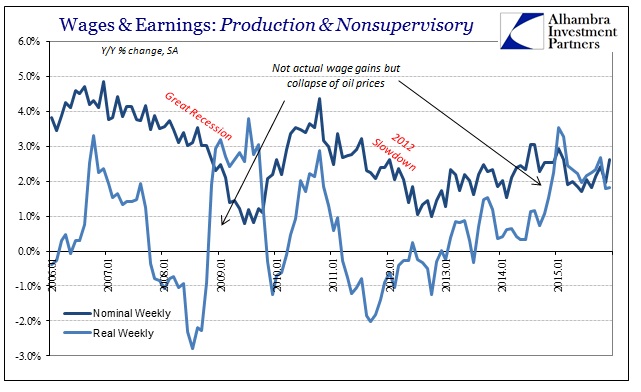 So we are left with the same deficiency of wages as the unemployment rate. There is no confirmation anywhere of either full employment or overheating. By historical context, on the contrary, economists should be very concerned about the kinds of behavior being exhibited again as under similar prior circumstances. Phantom jobs, phantom wages, phantom recovery. Maybe a year ago it sounded absurd, but it gets much less so all the time as the labor market “strength” in all its purported outlets has meant nothing.