How Many Ways Can We Prove It Doesn’t Work

How Many Ways Can We Prove It Doesn’t Work

So thorough is the unwinding, they don’t know what to do about it. By “they” I mean policymakers, economists, the media, etc. For years, monetarism has been described as money printing, therefore all that was necessary was just the threat. Then the events of August 2007 intruded, and what was implicit became explicit. Central banks globally responded, since the wholesale/eurodollar system is intricately interconnected, and failed spectacularly. Despite that, they were given another chance due to the dire nature of the circumstances.

Figurative money printing as a threat has been turned real, except that what central banks actually “print” isn’t money or even currency. It is just one form of bank liability; it proved entirely ineffective in 2008, and as if that judgment needed further confirmation global central banks have amply supplied it in the years since. In Europe, the ECB has taken a seemingly more radical approach with both QE and NIRP, but the end result is exactly the same.

Economists tell a very basic story with money printing, as inflation expectations. It is absolutely logical and contains sufficient internal consistency as to be plausible. If any entity prints money the result should be rising prices, the old adage of more money chasing fewer goods. Modern economists (Keynesians through the monetary form) have added another logical piece, namely that consumers and businesses respond to the threat of money printing by buying goods or increasing production ahead of the expected wave of rising prices. That, then, creates a burst of economic activity that will lead to the virtuous circle that we know as the sustainable growth period or boom.

There is much more debate about the theory towards the end than the beginning, however none of that matters if what is in the beginning is just plain false. The whole intended sequence falls apart if there is no actual money printing; if central banks only create inert numbers on a ledger balance sheet, the story would be entirely different as everyone is belatedly figuring out.

This morning several European countries reported initial estimates for their February CPI’s and the harmonized continental HICP version. Notably, Germany and France both fell below zero again; as always, quite “unexpected.” We have already surpassed the first anniversary of ECB’s QE announcement (expectations, after all) and are within a few weeks of a full year of PSPP (QE) buying activity. It should also be noted that the ECB’s third CBPP (covered bonds) began in October 2014 since the balance in that program is significant (€156 billion current balance). For all that, the full European HICP is quite likely negative once more in February. 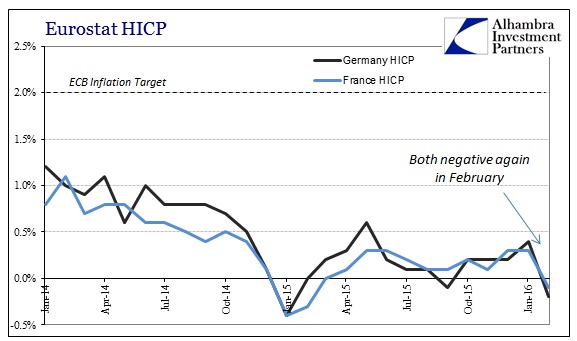 From that we are treated with more absurdity:

More ammunition for proponents? In other words, because QE failed to work proponents have more ammunition to call for more of what already failed to work. Subtracting the orthodox bias would lead unambiguously in the opposite direction – it doesn’t work, move on. As suggested at the outset, ideas put forth like this are the direct result of the whole thing coming apart, leaving the mainstream with no idea what to do. This is all the more confusing for them because QE in Europe really was no different than the LTRO’s which were once so universally and emphatically celebrated but are now almost never mentioned. 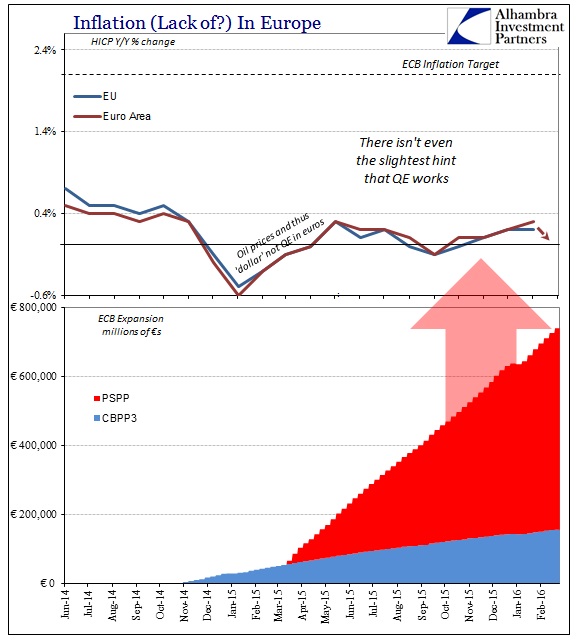 Though their methods are different, the results are the same. The LTRO’s were ostensibly a funding mechanism, collateralized, while PSPP is a buying mechanism, but the byproducts of both are useless bank “reserves.” These take a couple of different forms, including two directly upon the ECB’s balance sheet as either the current account or the deposit account. 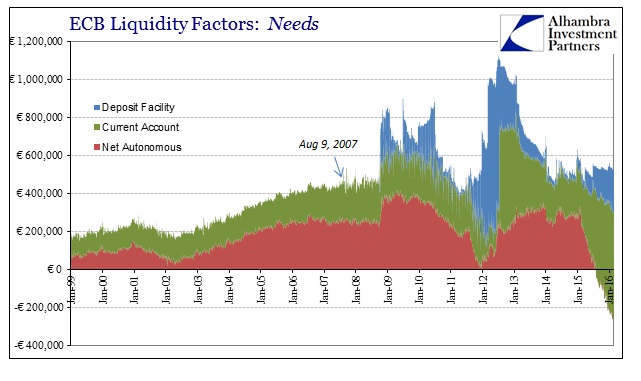 The third factor in the ECB’s so-called simplified balance sheet is the autonomous factors of which QE is actually a part. The structure of QE was intended to place any credit risk on the national central banks (NCB’s) actually carrying out the transactions, leaving the bonds purchased through PSPP on their individual balance sheets rather than consolidated with the ECB. Those NCB portfolios act as a subtraction in “liquidity needs” through these autonomous factors. Removing that category displays the combined effects of the CBPP and PSPP upon both the current and deposit accounts. 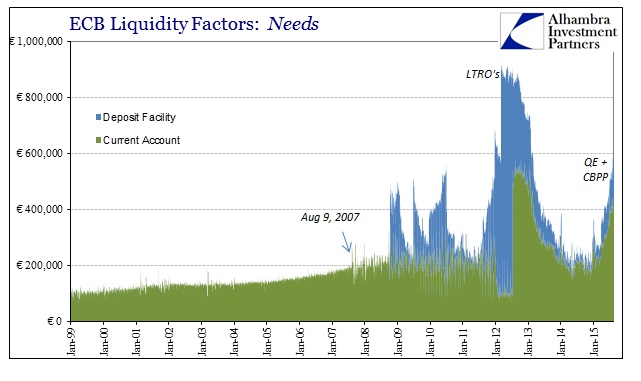 Though the magnitude isn’t quite there yet, the effect of the current monetary programs is the creation of “reserves” as a byproduct in the very same way as during the LTRO’s. So the current episode of “money printing” isn’t at all different than the last massive one, including the lack of any detectible imprint in consumer prices. There is no relationship whatsoever (other than perhaps a slightly inverse correlation) between this idea of ECB “money printing” and either inflation expectations or calculated inflation. None. 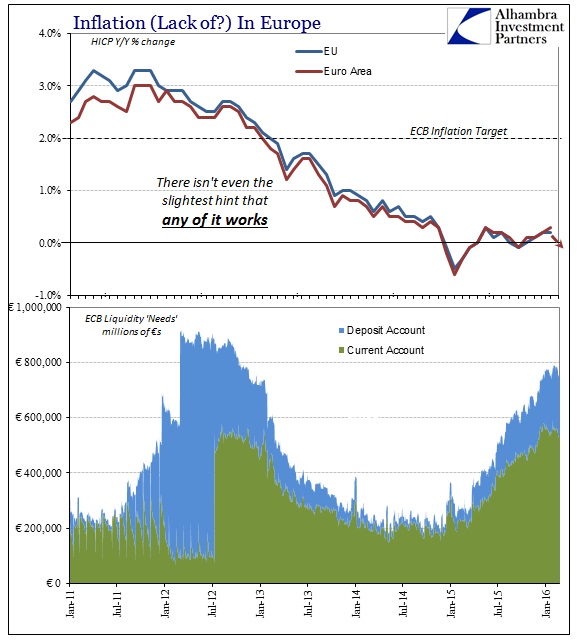 The most charitable interpretation is that the initial efforts (Europe, US and around the world) produced a burst of consumer price inflation upon only the expectations that these new monetary programs were, in fact, what everyone believed them to be. The events of 2011, however, dispelled that notion entirely and, seemingly, permanently. In other words, if the world was flooded with “money printing” from 2008 and really 2009, how could there be another global financial problem in 2010 and really 2011? This is another reason why 2011 was so devastating in not just this narrow economic outlook upon Europe, but globally for the entire eurodollar/credit-based currency regime.

With the illusion shattered, it didn’t matter so much that the LTRO’s were massive or even now the combined QE/CBPP/NIRP factors. Banks have responded similarly with both, to leave “reserves” fully, completely and totally idle. That counts for beyond just the ECB’s balance sheet capture of them, as European money markets (the third destination or form for all this “money printing”) are an utter mess from it all. 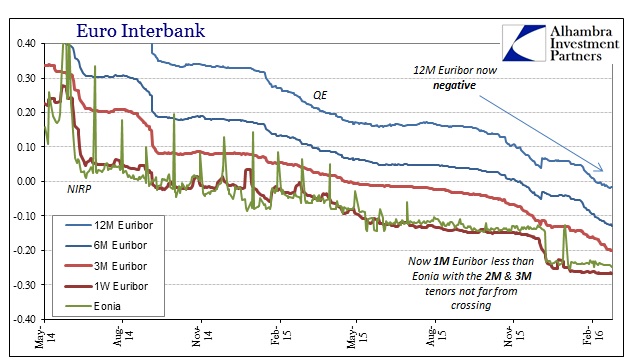 Not only is the entire suite of Euribor negative all the way out to 12-months, Eonia is now trading less negative than not just 1-week Euribor but up to 1-month; with both the 2- and 3-month maturities almost as negative right now. This is the opposite of money printing as it actively encourages bank destruction through very poorly understood disintermediation (with the growing potential for significant, even catastrophic, convertibility on that count).

Obviously, loan growth is absent which would be the very mechanism to carry out all this monetarism if it actually worked. In what might be the most ominous signal yet, required reserves which had at least increased somewhat starting in early 2014 (before NIRP and all this monetary madness) stopped last September. Required reserves were €113.2 billion on September 9, 2015, and were €113.8 billion as of yesterday. 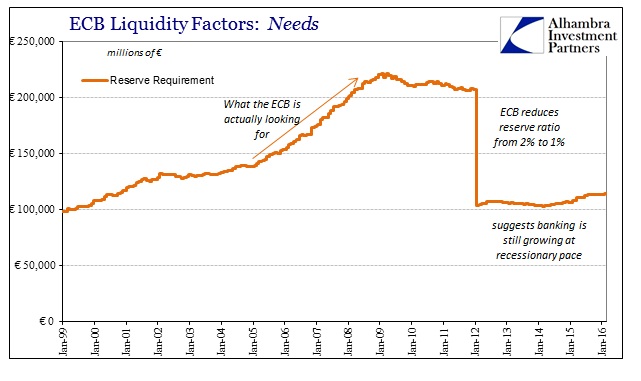 There is no inflation because there is no money printing. While economists curse this result and call only for more with increasingly irrational arguments, the people of Europe should actually rejoice that the ECB’s influence doesn’t extend so far as the Bank of Japan’s (big difference yen to euro). In other words, the effects of central bank monetarism are uniform in their lack of any success, the lack of “money printing”, but less so in terms of the harm they impose via redistribution sensitivity. In Europe, the costs are becoming increasingly apparently not just in the reckless nature of the money markets and banking but also in the form of the economy that just can’t seem to grow despite all the continued “stimulus.”