As I often write, in Japan it is far more difficult to hide the failure of “stimulus.” There are varying degrees of visibility in that regard around the QE world, but they all share negative redistribution as the base alloy. That’s why Janet Yellen may be merely uncomfortable and Mario Draghi increasingly brooding, but Haruhiko Kuroda was just pushed to state already the obvious. Toward the end of last month, he finally admitted QQE wasn’t what it was supposed to be, though he was careful and as charitable (and passive) as possible with his wording.

The remarks contrast with the optimism Kuroda showed as he began his record monetary stimulus program in April 2013, when he made a monetary-base expansion target the centerpiece of his strategy. Three years ago he said this tool was “the most appropriate” way to reach the 2 percent inflation goal and that “monetary policy alone” could achieve this.

Indeed, three years ago there was no doubt in his proclamations as to the power and fury of bank “reserves.” The initial statement in the official QQE document is explicit on that account:

The Bank will achieve the price stability target of 2 percent in terms of the year-on-year rate of change in the consumer price index (CPI) at the earliest possible time, with a time horizon of about two years. [emphasis added]

Not “wants” or “intends” but “will achieve.” That was certainly how “markets” saw it, still enraptured by the idea of “money printing” even if by April 2013 nobody was quite sure where all that “money” actually was.

Stocks surged as Kuroda won investors’ confidence in a campaign to revive the world’s third-biggest economy, mired in three recessions in the past five years. The BOJ set a two-year horizon for the price target under a “new phase of monetary easing,” as the governor won the backing of a board mostly appointed by the previous government.

By his own words, Kuroda was almost giddy that Abenomics had given him such a free hand for havoc.

“This is an unprecedented degree of monetary easing,” a smiling Kuroda told a news conference after his first policy meeting at the helm of the central bank.

“We took all available steps we can think of. I’m confident that all necessary measures to achieve 2 percent inflation in two years were taken today,” he said.

Apparently not; not only was QQE accelerated a few years later, the Bank of Japan is now facing NIRP and NIRP revolt. Somehow the idea survives that what was done via QQE was “stimulus” even though there is no detectible inference of anything like it. The context of QE will always be determined by the tense; it “will be” powerful and effective; it “was” disappointing; it “will” achieve the inflation target; it “was” not enough on its own.

Even so, apparently it “must” continue time and again as observation has failed to kill it in any of the eleven times before. As noted in one of those passages above, Japan seems mired in three (now perhaps as many as five) recessions over the past five (now eight) years but that isn’t really the case. When you have repeated recession without any recovery in between these aren’t so much separate cycles as one supercycle. The only constant within it is QE and stimulus in various formats that never work. 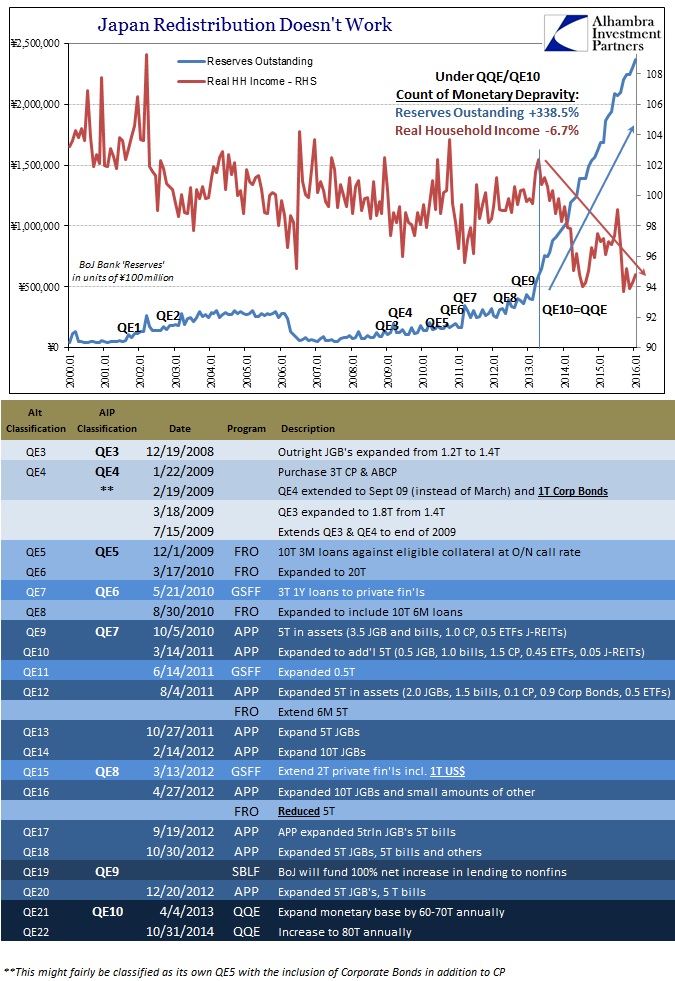 What is demanded now is not sheepish admission but full accounting. It didn’t work, but that isn’t the extent of it. The tally of depravity must be added to the count, especially in the Japanese household sector. The Japanese themselves have been obliterated all in the name of a future recovery that never leaves, as QE’s worth, the future tense. That includes the updates on household income and spending in January 2016 that once again disprove the whole theory.

Even economists knew QQE and “stimulus” were in trouble after the tax hike in 2014 (even though they should have known by the spending burst in front of it) when nominal household spending dropped 3.9% in May 2014 after falling 0.7% in April. Even though nominal spending rebounded to +1.3% that June, there would be only one other positive month the rest of that year; “real” spending was, of course, deeply negative throughout.

Over the past three months, dating back to November 2015, nominal household spending was -2.9%, -4.2% and for January -3.1%. In other words, the past three months were worse in overall household activity than immediately after the tax change that supposedly sent Japan into its fourth recession in the series. The only saving grace as far as Japanese citizens are concerned is that QQE failed to ignite sustainable inflation to multiply those nominal declines once more. 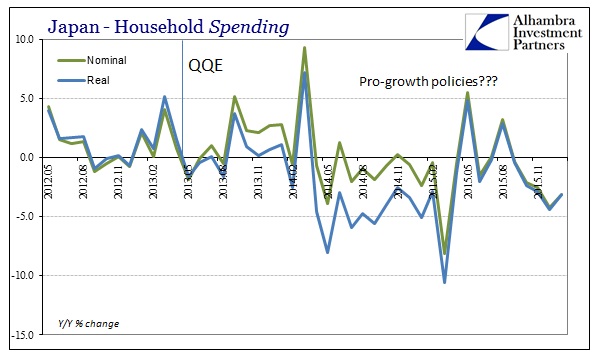 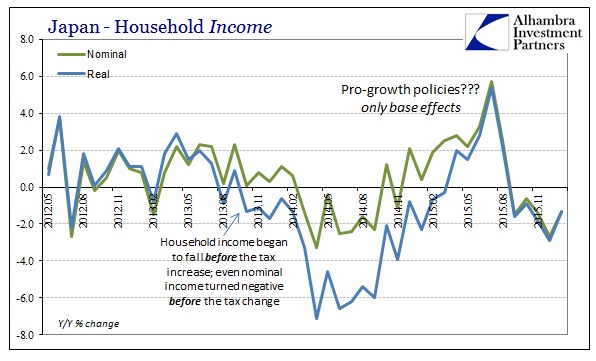 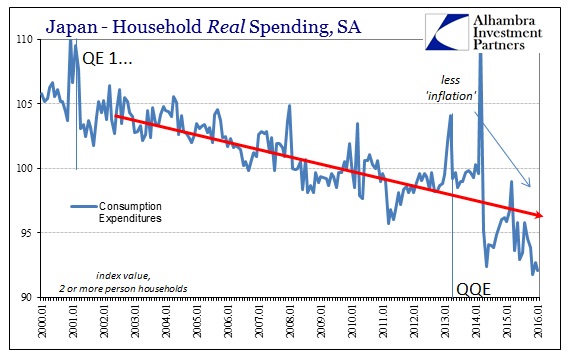 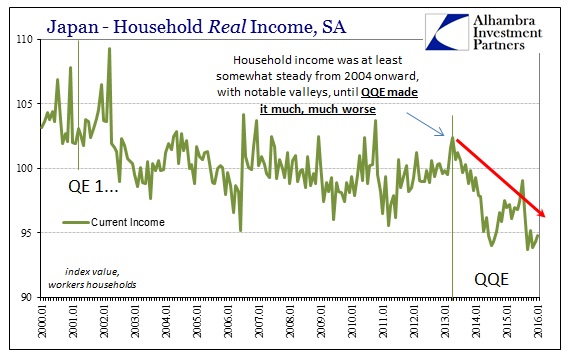 In its place, business investment especially surrounding the expected export renewal of Japan Inc. was supposed to lead to the full recovery that would allow households bearing the brunt of redistributionary forces to eventually catch up. Updated estimates for those accounts aren’t looking so positive, either, which we already knew from the continuously weak GDP reports. Still, if there isn’t even the possibility of capex or even corporate profits offsetting, then no wonder QQE has turned to QQE + NIRP and Kuroda’s admission.

Decelerating capital investment and corporate profits are a worrying sign that the government may need to respond with more stimulus measures to prevent business and household activity from weakening further.

“The global economy is stagnating, which points to a slight downward revision to Q4 GDP,” said Hiroaki Muto, economist at Tokai Tokyo Research Center Co. “The economy will return to growth in the current quarter, but it won’t be strong. This could hasten talk of an extra budget for economic stimulus.”

No matter how thoroughly debunked, no matter the humiliation of central bankers in admitting their massive, unprecedented surefire solutions weren’t, the answer is only allowed to be “stimulus”; in other words, orthodox economics must prevail always before actual economic growth. Economists don’t really want recovery, they will only consider “their recovery” and thus refuse to relinquish even though in these purer circumstances like Japan we can easily observe the direct harm they cause. There really isn’t any mystery as to why the global economy suddenly stopped growing once all the “stimulus” was unleashed. What’s left to figure out is how and when they will be stopped, and we know that doesn’t mean actual, sustainable growth and “exit.”