The Monetary Spectacle of the Brazilian Warning

The Monetary Spectacle of the Brazilian Warning

During the global end of the Great Recession, Brazilian GDP contracted year-over-year in just three quarters. The worst was about -2.5% in Q1 2009, but by Q1 2010 GDP was rising 9% again. With the latest update today, Brazil’s GDP declined by just less than 6% year-over-year in Q4, representing the seventh consecutive contraction that doesn’t look to be ending anytime soon. In fact, all the economic accounts are still slowing down. 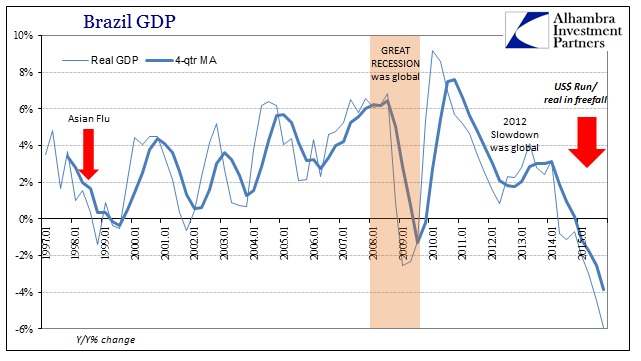 It was the worst quarterly GDP estimate since 1990. In isolation, -6% would be shocking given that comparison to not just the Great Recession but also the global end of the dot-com recession and more importantly Brazil’s experience during the Asian flu.

Brazil’s economy shrank 3.8 per cent in 2015, putting what was once one of the world’s fastest-growing large emerging markets on track to suffer its worst recession since official records began.

The big GDP contraction was the worst in 25 years, and comes as a perfect storm of collapsing investment, lower commodity prices and constrained government spending hits growth.

Again, all indications are that Brazil has yet to even see the “eye” of that “perfect storm.” The arrows on everything are all pointing down, except “inflation” where the calculated IPCA price index keeps rising. 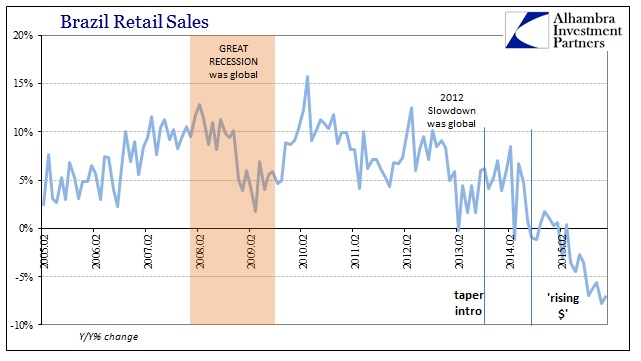 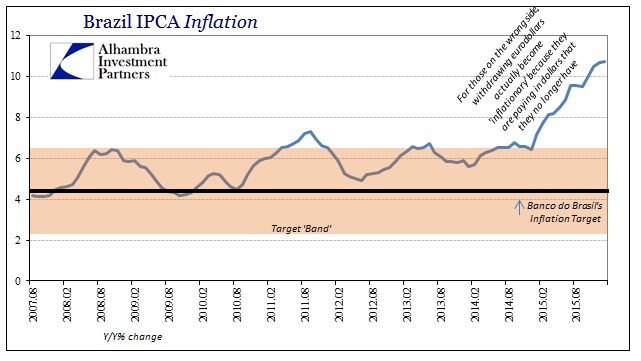 This is far more than just aftereffects from China’s own brush with the interminable slowdown; it has to be.

Latin America’s largest economy was once a darling with investors as sound macroeconomic policy led to continuous growth, culminating in an Asia-like 7.6 per cent expansion in 2010.

Was it really “sound macroeconomic policy”? The amount of debt piled into Brazil during those decades might sound “sound” to an orthodox economist, but financialization of that kind is devilishly susceptible to reversal. As we know well from our own monetary experience, artificial growth in that manner is no true foundation at all. Basing economic growth, especially over a long period, upon foreign money supply means that there are no perfect methods of dealing with monetary interruption. This much is obvious in either the IPCA inflation rate shown above, or Banco do Brasil’s dramatic struggle with shrinking “dollar” availability shown below. 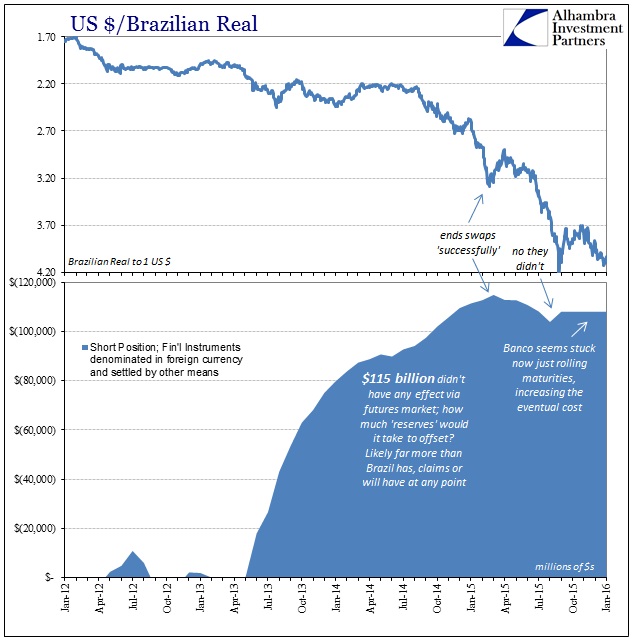 In other words, the central bank is increasingly trying to finance what they can’t at costs they can’t afford to bear. Being on the “short” end of the eurodollar means painful economic adjustments when rollovers become fewer and desperately more costly (reflected in the currency exchange). If Brazil had actually followed “sound macroeconomic policy”, meaning in reality market-based balance rather than soft central planning that takes any GDP growth no matter how it was generated, the adjustment in global monetary conditions would not be so severe – imbalances would never have gotten so far out of hand.

That is exactly what we see in Brazil right now, as both the financial system and economy are being made to adjust to this paradigm shift in eurodollar behavior. Without the flow of “dollars” the bare economy is exposed, meaning the actual basis or potential is a lot less than anyone anticipated or figured in modeled regressions that take GDP at face value; particularly those orthodox monetarists that welcomed the massive eurodollar influx in the first place as if it were ever “sound.”

That is the relevance of Brazil as far more than an unfortunate economic and financial spectacle. I think the unfolding disaster there is a warning about being forced to find out through eurodollar decay what the true economic foundation might have actually been all along. It’s already far worse than ever believed, and they still aren’t to the end yet even though it’s been more than two years already. This is depression stuff, a more-than-temporary, major economic adjustment and dislocation. And it is taking place in a world stuffed with bank “reserves.”