2012 Redux; They Really Don’t Know What They Are Doing

2012 Redux; They Really Don’t Know What They Are Doing

The old adage is that strong and sustained economic growth cures many ills, if not all of them, so it is unsurprising that so many central banks would be so determined to create it. They are, surprisingly, limited in that endeavor as they always stop one step short of recognizing the shortfall. In other words, they will do everything (as they are now forcing themselves to prove) in the orthodox toolkit to achieve that goal but absolutely refuse any other means outside of it – including actual free markets.

The big news over the weekend came from Italy, and it was more rumor and innuendo than anything. Some very ugly patterns have resurfaced in events everyone assumed had been put to rest in 2011. Bank stocks, European in particular, have had a difficult time since the middle of last year, so the actual condition of European banks is undoubtedly a primary topic of policy discussions – both fiscal and monetary. Nowhere is that more pressing than Italy, where Italian banks stocks are off 35% (in the FTSE Italy Bank Index) vs. “just” 25% for European banks within the Stoxx Europe 600.

Representatives of Italy’s leading (I’m not sure what qualifies a bank for that description since it is a pretty dubious distinction in this specific case) banks met with government officials to discuss yet another bailout scheme. The banks want the government to fund and established a financial vehicle in order to offload the still “somehow” rising epic of non-performing loans. They argued the same all through 2012 until Mario Draghi made his dramatic “promise” that sent sovereign and bank yields plummeting as “markets” assumed that would be the end of the matter.

It’s yet more evidence of the main flaw in orthodox theory. It was presumed that the Great Recession was a temporary interruption in the prior economic trend (which wasn’t itself all that robust); a very serious deviation brought about largely by the financial “shock” of the global banking panic. Recovery theory proceeded on that assumption, whereby central banks’ primary task was to restore banking function. From there, with a clear financial path, the economy could fully recover and that growth would over time alleviate these major imbalances left over from both the pre-crisis and the policy efforts in the aftermath.

It never happened that way, especially in Europe and especially with the events of 2011. Once more the ECB made “normal financial function” its priority first with OMT’s and then the massive LTRO’s. All of that seemed to have worked and December 2011 was the last of major public near-panics. With bond yields and spreads very, very low and no further disruption to banking there should have been recovery; but there hasn’t been. 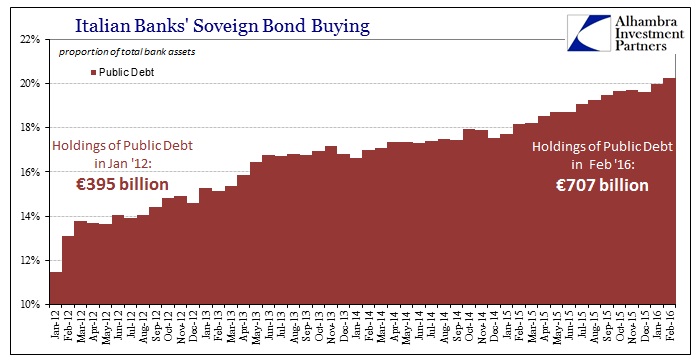 Proving monetary policy irresistible almost exclusively within its own track (and to nothing else), Italian banks went on a sovereign bond binge of epic proportions. Since the LTRO’s began, Italian banks have increased their holdings of European sovereign securities by 79%, adding more than €312 billion while the ECB through its various programs provided price “cover.” While that was supposed to signal further restoration, it did nothing to shift the trajectory of the cumulative Italian loan portfolio.

Italian bank holdings of non-performing loans have risen a quite similar 83% since the start of 2012. At just shy of €200 billion, NPL’s suggest why Italian banks are rejecting the monetary transmission invitation. 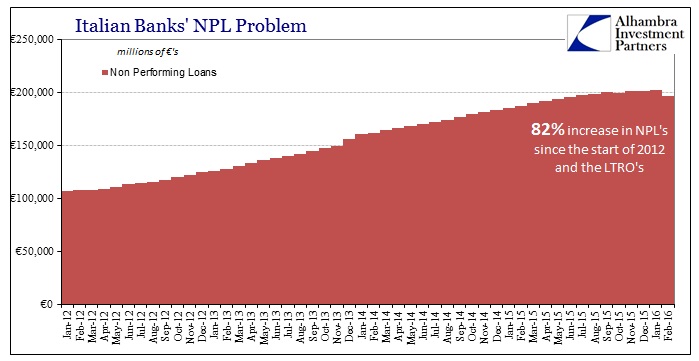 Instead, the banking system in Italy has used various ECB “largesse” (starting with the LTRO’s) to first shrink and then practice the banking equivalent of liquidity preferences. As Keynes once suggested of real economic agents, there is a similar wholesale banking dynamic at work that central banks intentionally make no account. There has to be a reason to lend not just because rates are low and that is assumed to be “stimulative” of loan demand. Absent total profit opportunity, banks instead maximize whatever small return that prioritizes safety and especially liquidity (a factor that the ECB or any central bank further distorts by whatever it is actually doing in the “market”). 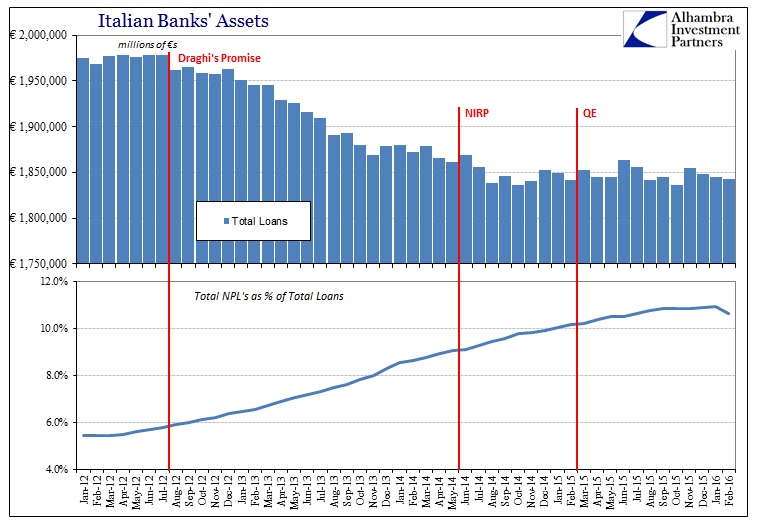 Italian banks took Draghi’s promise about “doing whatever it takes” not as a signal to resurrect risk and robust financialism but rather to shrink their loan portfolios. Again, the rationale isn’t difficult to discern since there has been no recovery; and thus no recovery in NPL’s that are now almost 11% of all loans in Italy. And it’s not just loan portfolios that have been cut, total bank assets have, too, in a trend that is immediately recognizable all across the world. 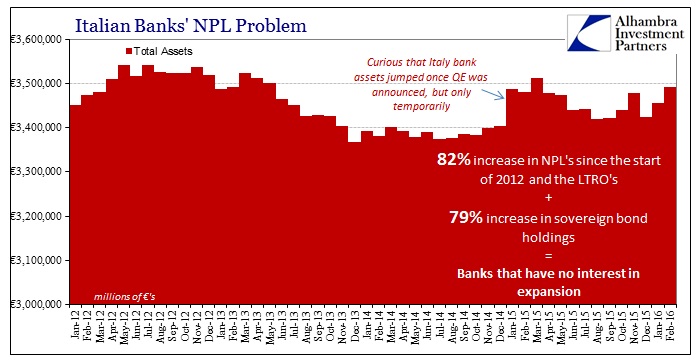 All of this is supposed to be capitalism at its finest. Central banks continue to undertake greater effort to restart a recovery that will not because banks will not and really cannot. That begins to answer why bank stocks have been under so much pressure as with global liquidity; there is a gaining realization that monetarism doesn’t work because financialism is not capitalism and thus requires an active monetary agent to be carried out. Monetarists claim that they are searching for and stimulating the “animal spirits” of capitalism but that isn’t true at all, with Italian banks providing all the necessary evidence. It is the “printing press” that they seek and it is not a central bank function even though many assume, still, that it is.

Without the willing and heavy participation of the banking system, specifically balance sheet capacity in all its forms, including lending and money dealing, monetary policy is just empty promises and really derivative pleading. The recovery of a financialized economy has to be determined by banking whereas in recovery banking is secondary; loan growth is not the predicate for capitalism but its byproduct. For one day, however, it all worked again as Italian bank stocks surged on the premise that the Italian government might bail out its banks that were supposed to be several years past needing one. Like the expansion of QE, it is more proof that none of it ever actually worked and they really don’t know what they are doing. The insolvent remain insolvent, the money still not money, and the recovery something else entirely. Central banks possess no recovery magic; they can’t even deliver their own version of one.