Revisions To Industrial Production Show, Unsurprisingly, Much Less Recovery And Even More Recession

Revisions To Industrial Production Show, Unsurprisingly, Much Less Recovery And Even More Recession

US industrial production fell yet again in March to (benchmark revised) -2% year-over-year. With updated revisions, the contraction in IP now extends seven months rather than what would have been just five under the prior assumptions. As anticipated yesterday, auto production was a leading factor in the retreat.

Manufacturing output decreased 0.3 percent in March. The production of durables moved down 0.4 percent. The largest declines, about 1 1/2 percent, were registered both by motor vehicles and parts and by electrical equipment, appliances, and components. 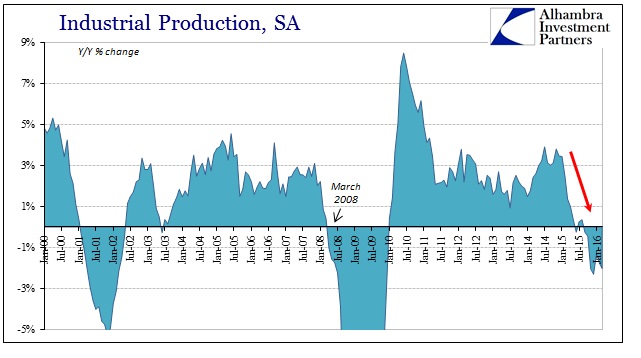 The industrial US economy overall, which includes manufacturing in recession, is much worse than previously thought (at least by the subjectivity of the major data constructions). Benchmark revisions in April erased a good part of the “bump” in growth and activity that was assumed to have occurred especially in 2014, while at the same time reducing significantly estimates for industrial output last year. The prior benchmark showed year-over-year contraction (an important cyclical distinction) starting in November, with none of those months worse than -1.74%. The revised benchmark now figures the contraction to have begun in September (and with June 2015 revised from +0.9% to -0.2%) with three of the last five months (including March) at -2% or less. 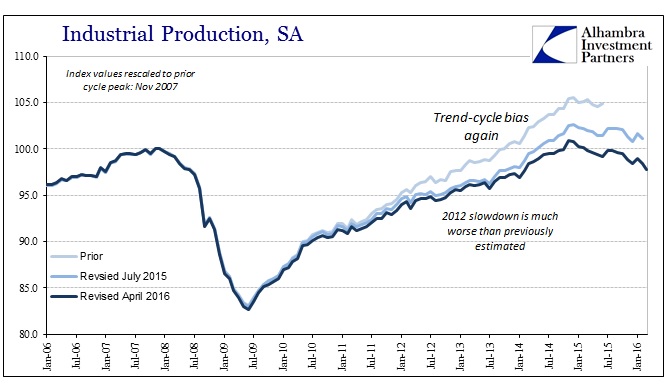 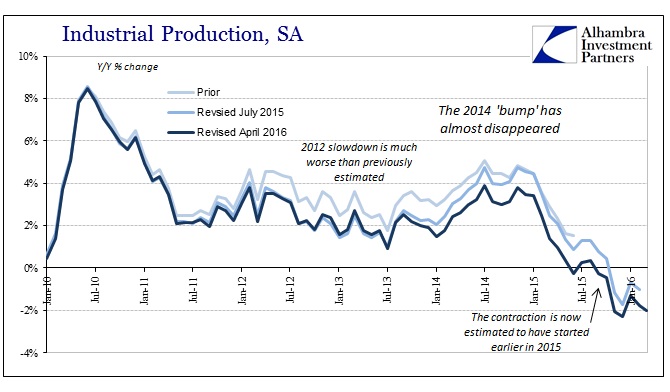 That leaves the state of US industry with a much worse current situation after having experienced significantly less “recovery” over the past few years than the mainstream thought, particularly 2014. These revisions continue to suggest what I have suspected throughout, that there is and has been far too much upward bias in these accounts owing to expectations of what the recovery “should” have looked like even though by almost every count it hasn’t conformed to the usual cycle behavior. As I wrote just last week when wholesale sales were revised down:

In other words, as far as wholesale sales are concerned, there was a lot less to 2014 than originally thought, which again suggests that economists and policymakers were blindly following flawed data with obvious contradictions. And it makes 2015 much less than believed, only fostering more mainstream confusion.

Now that we can add industrial production to the lengthening catalog, as it increasingly isolates the already-lonely “best jobs market in decades.” At the same time these revisions further confirm that the slowing into 2015 wasn’t at all surprising – there was no real acceleration in 2014 that would have suggested cycle completion and thus the predicate state for “overheating.” Trend-cycle “smoothing” if seriously out of alignment would have had the effect of greatly amplifying positive variance in the chained monthly estimates. These benchmark revisions continue to direct blame in only that direction.

In just industrial production, the revisions are actually worse than they appear since the crude oil production component was revised upward slightly for the whole period. Thus, it was the non-crude industrial economy that is much less than first thought, again conforming to observations taken from other accounts of continued contraction and economic strain. The benchmark series before last July’s update had figured that US industry had slowly recovered to at best 5% above the previous cycle high by late 2014; that would have been a sluggish recovery, taking seven years to register that far. The new benchmark update shows that at best IP was less than 1% above November 2007 in 2014 and is now more than 2% below that level almost eight and a half years later. In other words, it really has been no recovery at all and now heading faster and longer in the wrong direction again. 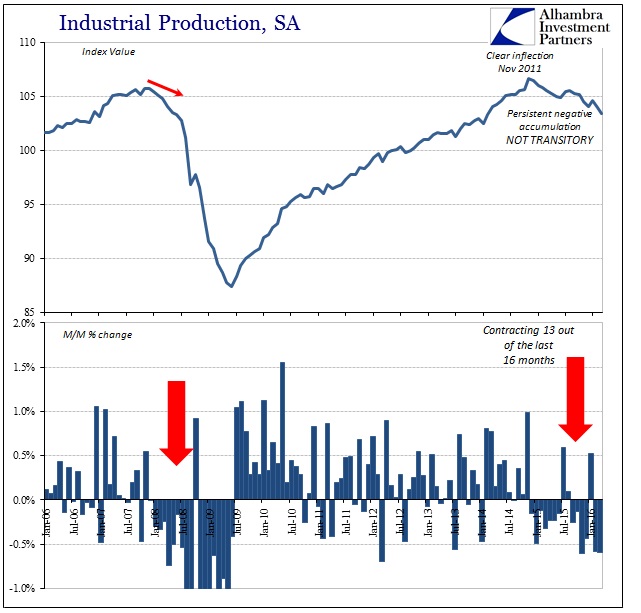 The revisions apply to capacity utilization rates, where the reduction in capacity is much more severe in 2015 and 2016 than previously figured. That is a very cyclical signal, as it is productive inefficiency that turns any slowdown into full-blown recession – where businesses stop adjusting to top-level sales deficiency and start actively and seriously cutting back as they move closer toward survival mode. 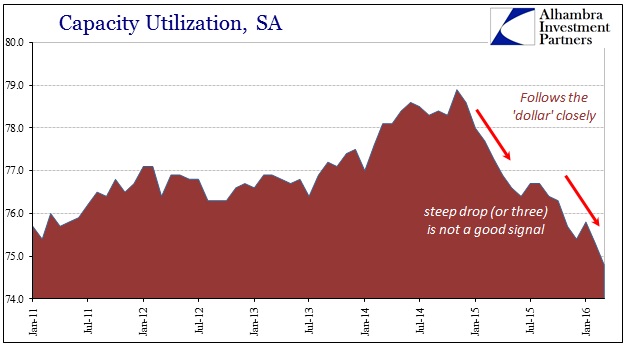 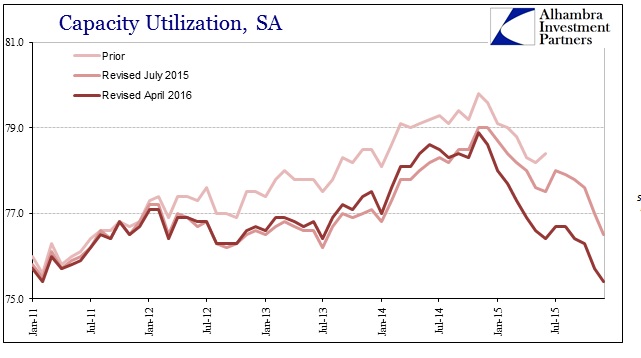 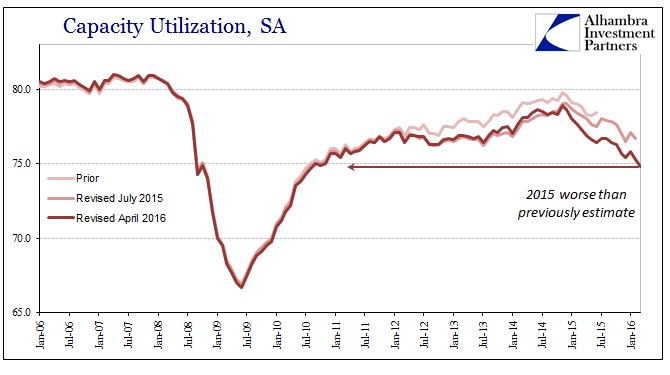 The revisions in some months cut 1.3% or more off the utilization rate, which is an enormous adjustment. Last month’s estimate of 76.7% brought the utilization rate back to late 2011 levels; the revised estimate for February is now 75.3% instead, with March declining further to just 74.8%! The last time we saw such a low level of productive efficiency was August 2010 when Bernanke first whispered of QE2 at Jackson Hole.

Despite all of this, the recovery narrative will not die:

Growth estimates for the first quarter are as low as a 0.2 percent annualized rate. The economy grew at a 1.4 percent rate in the fourth quarter. But given a buoyant labor market, the ebb in growth is likely to be temporary. [emphasis added]

Temporary?  Transitory? IP has been on a downward track, as has almost everything else, since late 2014. Through all of that time the BLS version of the labor market (though curiously not wages) has been historically strong, and still the economy only weakens (even after 20 or so months already with likely many more to come). No matter how recessionary everything else takes, no matter how contradictory that clear and widespread weakness is to everything about the payroll statistics, the unemployment rate is given faith and deference that just doesn’t belong especially for the past few years. The more revisions take away what little support it had (and it was not much to begin with), the more irrelevant it really is. You absolutely would not know it if all you used to guide your analysis was the monthly payroll figures, but the US economy is in serious trouble; moreover, it has been for years.