Last week, Japan reported GDP growth of 1.7% in Q1. That was much better than expected and led to all the usual extrapolations about how bright the future is in Japan now that QQE is working (and NIRP since that was started during the quarter). In this devalued economic world of central banking for the sake of central banking, context and common sense need not apply since all that matters is one quarter with a plus sign so that all prior quarters can be forgotten; no matter how many of them have piled up to this point.

Rising gross domestic product reverses a contraction in the fourth quarter of 2015 and means Japan has avoided another technical recession, defined as two consecutive quarters of negative growth.

The faster than expected pace of growth suggests the Japanese economy is managing to shake off the effects of a slowdown in China and a stronger yen — at least for now — with domestic demand having more momentum than previously thought.

Economists focus entirely too much on “two consecutive quarters.” Because of that, they can plausibly make statements like this to the media:

“I was expecting a strong read because the economy is in recovery,” he told CNBC’s “Squawk Box.” This year, it’s quite likely growth will be around 1 percent so the recovery is going on fairly smoothly.”

They use words like “momentum” and “recovery” where any reasonable human would never dare. Even in a quarter where GDP expanded by 1.7% these descriptions just do not apply. For starters, of that 1.7% growth, 1.1% of it was due to an increase in consumer spending. Some economists have pointed out the extra day in February as one reason for that additional spending, but setting aside any calendar objections the real Japanese economy has to account for scale – meaning that one quarter’s potential gain doesn’t come close to closing the gap for all prior declines. 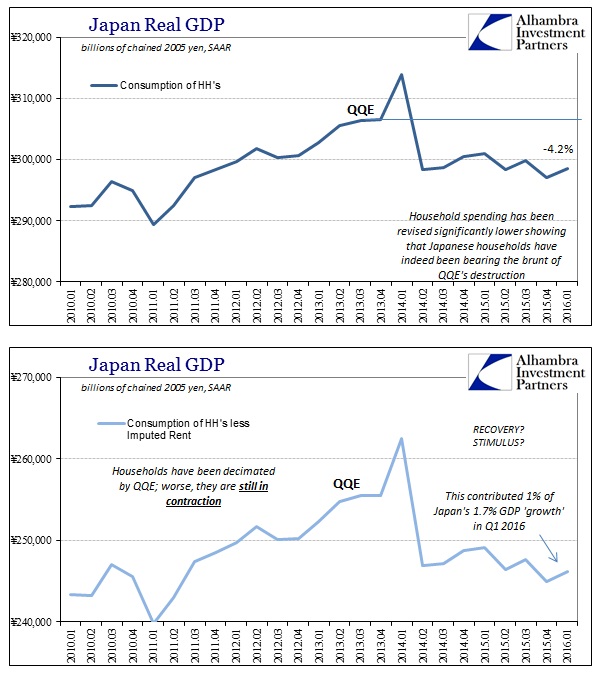 With Q1 spending measured to be slightly higher than Q4 2015, GDP can appear to be as economists claim while in reality that level is 4.2% less than when QQE started now three full years ago. It might not meet the technical definition of recession but it sure is about as far from “recovery” as Japan might otherwise get. The household sector didn’t contribute anything to recovery other than the usual variability swirling the drain.

In the past five quarters, household consumption (excluding the made-up imputation of owner’s equivalent rent) has in order gained 0.8%, lost 3.2%, gained 2%, lost 3.3%, and now gained 1.9%. It actually is not surprising some economist can find economic “momentum” from that trend because there is no meaning to the word in the orthodox context of one quarter’s number.

That is what we find for GDP overall, where the media says that Japan isn’t in recession so therefore it must be at least growth, if slowly recovering. From that, every small positive is extrapolated into where it will never actually go: 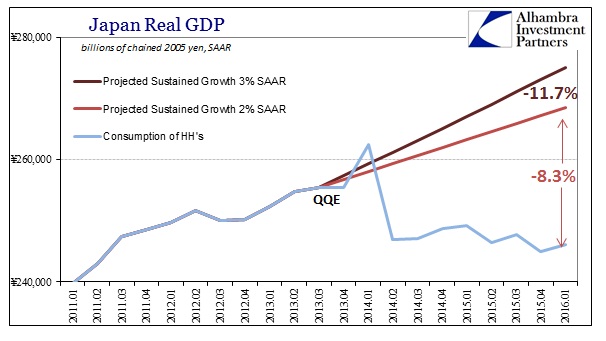 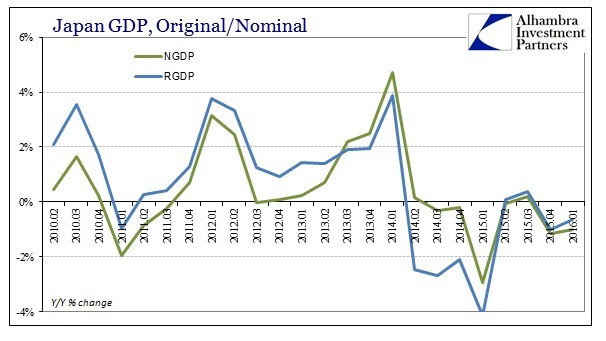 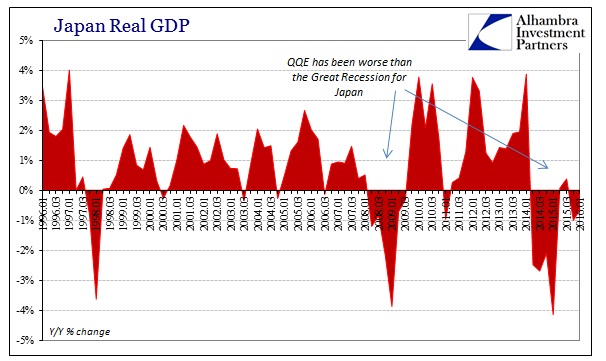 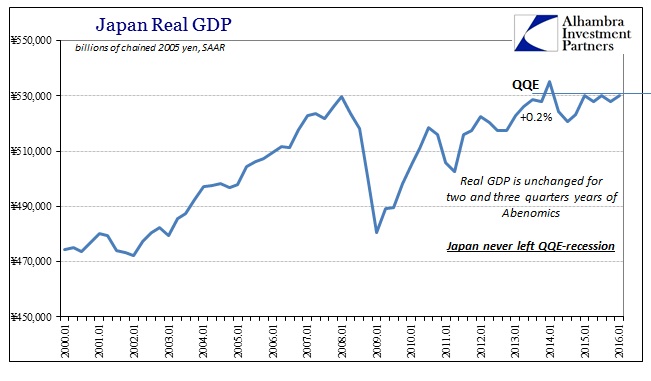 A positive quarter is not the same as recovery just as two consecutive negative quarters is not the only kind of recession. By an rational and unbiased accounting, Japan is and has been in economic trouble for years now – and that is even more so than the great slumber the country has experienced during its continuous lost decades. From this perspective, +1.7% in Q1 is actually the worst case as it suggests the same kind of negatively biased stasis that has plagued post-QQE Japan during the entire run of “stimulus.” An actual and serious recession would at this point be a welcome result for speeding up the nastiness and at least condensing it before losing so many more years to orthodox and mainstream “momentum.”

The Japanese may not have to wait very long before sinking into that “cyclical” depth, however, as the other part of Q1’s GDP “strength”, net exports, continues to suggest nothing like recovery. Whereas consumers supposedly contributed 1.1% of Q1 GDP, net exports “contributed” 0.8% and thus completing the statistical mirage. The only reason GDP finds such a positive impact is because while both exports and imports are fast dropping, imports remain in the lead. Exports fell “only” 7.9% in Q1compared to the 15.8% collapse in imports; quite a net positive to GDP.

Today, the Ministry of Finance reports that trade conditions in April only got that much worse for Japan – though still GDP “positive.” There is clearly momentum just not in the way that GDP is made to account for it. Exports fell 10.1% while imports imploded, down 23.3% from April 2015. That does not in any way suggest “the recovery is going on fairly smoothly.” 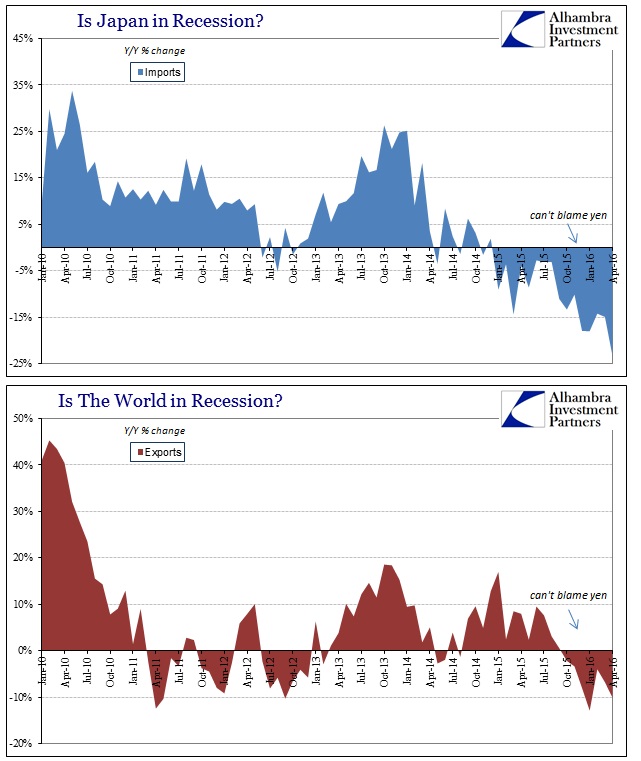 Economists are quick to blame the yen for this reversal but as you can see above the turn in Japanese trade took place before the currency inflection. Imports have been declining since late 2014 and while a good portion of that is oil and oil prices (in dollars) the more serious drop of late is widespread. Imports from China, for example, were down an enormous 17% in April, and are down just about 10% in the first four months of 2016 cumulatively from the same four months last year. That is all Japanese economy, meaning both the depth of decline and the acceleration of it – Japan gets no oil through China, leaving only much, much less of Japan Offshore Inc. flowing between the countries. 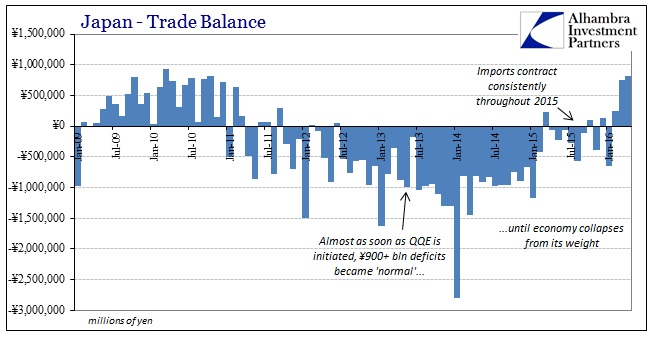 Because of that economic disintegration in trade, the Japanese have been back in a merchandise surplus. QQE impoverished Japan as firms moved productive capacity offshore in amplified fashion, and now Japan “gets” to share that with the rest of the world as its internal economy reflects something much worse than recession – direct and full participation in the global slowdown that doesn’t stop slowing down.

You can actually see the orthodox con in all this; economists get to claim that the economy is looking up because 1.7% GDP growth was much better than expected and that is what the media reports. Like every other year, the mainstream proclaims some positive number as the start of the recovery and then spends the rest of it wondering why it never happened and spending very little time on why not; preferring instead to still further project how “unexpected” weakness is just going to mean more “stimulus.” Throughout all of it, the true economy only gets weaker and weaker, an observation that isn’t all that difficult to find. Because it doesn’t follow a straight line or fit the “technical” definition of recession, economists can continue to use meaningless words to describe what is already much worse than one recession in one country.