The Monetary Wildfires In Canada

The Monetary Wildfires In Canada

The massive wildfires in Alberta earlier this year had a tremendously negative effect upon not just the oil sector but all of Canada. Not surprisingly, Canadian GDP released today was abysmal. Falling 1.6% in Q2, that was the worst quarter since 2009. Fortunately for the Bank of Canada who had been “stimulating” again since last July when it cut the overnight rate by 25 bps to 0.50%, the wildfires give its policies some cover to explain what would have been otherwise already dismal.

Pre-report estimates showed that the wildfires were expected to contribute about 1% to 1.1% of the GDP decline. Thus, even without the hellish conflagration across a huge chunk of Alberta’s oil production fields Canadian GDP would still have contracted in Q2. After such an atrocious and devastating year last year, as “transitory” oil prices crashed the Canadian economic margins, 2016 was supposed to be the year to forget all that.

Instead, what we find in Canadian GDP is what we find almost everywhere else – unstable growth. From the start of 2015, GDP has contracted in half of the six quarters since; and of the other three, one, Q4 2015, was near zero, leaving just two quarters as significantly positive where even the best was just 2.5%. 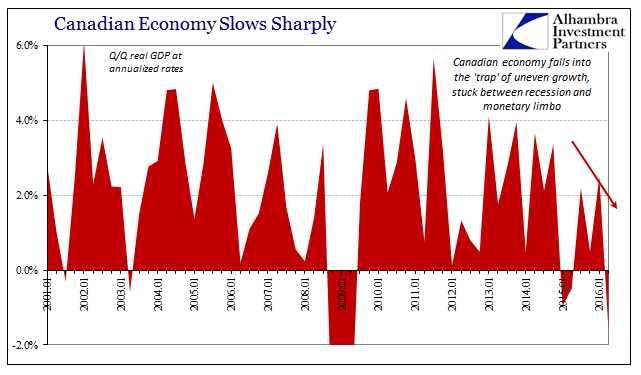 While much was made of the two negative quarters to start last year in terms of the “technical recession” definition, and thus positive growth thereafter as surely the recovery, what has followed is significantly worse than recession which is again in common with the rest of the global economy. While the word “recovery” has been used far too loosely since 2009, a recovery means exactly that. The recession pushes output below potential or trend but only temporarily, while recovery pushes output right back to the prior baseline.

That is not what we find here in Canada. The decline in output in early 2015 coincident with the global arrival of “dollar” disruption drove the Canadian economy lower like recession but the uneven nature of output in the quarters since keep it far off trend. 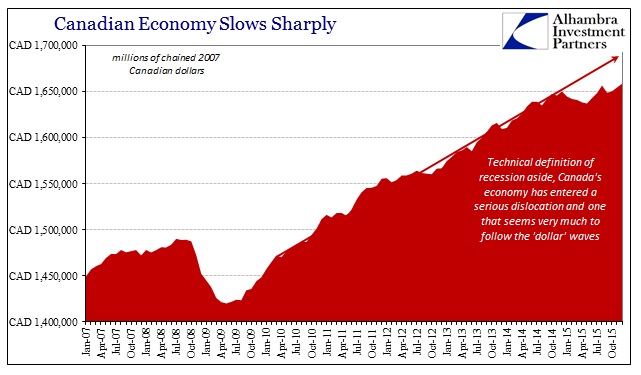 In other words, these little mini-recessions knock whatever economy off track, US included, and then it never recovers from them. Because it isn’t a constant contraction the mainstream is afforded the opportunity to continue on writing and talking about “stimulus” and growth as if either were indicated. Instead, an economy that was truly growing would not do so only in fits and starts; that is the sign of monetary instability.

With Canada, that isn’t much of surprise particularly given the visible fruits of the “rising dollar” are the negative effects on commodity prices, especially oil. From the standpoint of productive investment, the crash in oil is devastating business investment in what appears to be a durable, non-transitory manner. 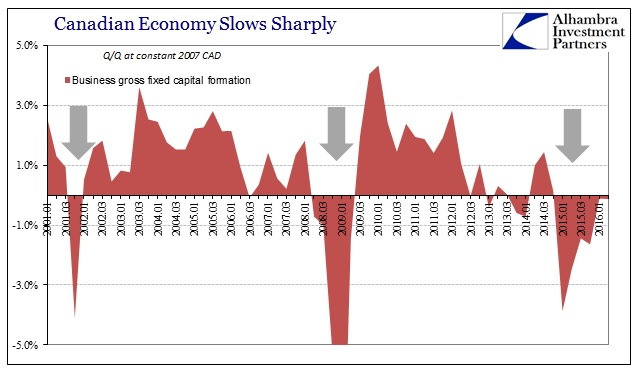 With the engine of productive capacity under pressure, and having been that way since 2012 and in far more industries than just energy, consumer spending in Canada (as everywhere else) remains suspiciously lackluster compared to prior “cycles.” 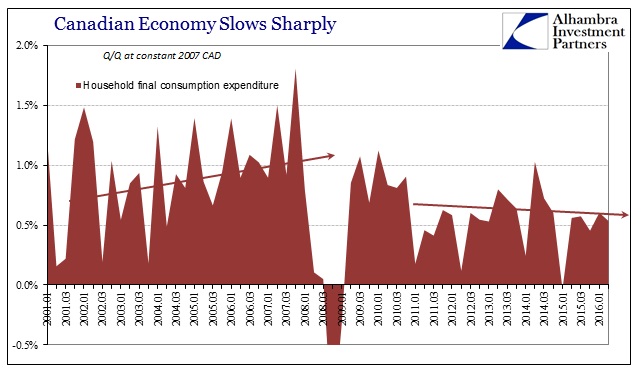 Canadians are not to fret, however. Despite these chronic drags on activity the next quarter appears very bright. Estimates for Q3 are already high but not from an organic rebound in business investment or the final reversal of the overall dismal economic nature shown here, rather “stimulus” is on the way. The Bank of Canada and economists around the country note that Canada Child Benefit payments, a form of fiscal “helicopter” really, should help boost consumer spending starting in July.

For the second half of the year, CIBC economist Nick Exarhos says “we’ll be leaning heavily on Ottawa for growth,” citing the arrival of those federal child benefit cheques. He also says the economy should start seeing the benefits of billions in promised infrastructure spending.

Given the track record of “stimulus” all around the world, perhaps a little more skepticism is warranted for an economy “leaning heavily on Ottawa”? After all, Canada’s problems aren’t really Canada’s problems. At best, perhaps fiscal spending and payments might temporarily offset weakness (if even that), but it should be made clear that weakness is Canada’s continued future:

Unfortunately, the rest of the economy continues to face headwinds, with export growth bogged down by high U.S. inventory levels.

There is no getting away from the “rising dollar” and its effects on the global economy. It’s not recession, at least not yet, but as always that is actually worse. Any economy that shrinks and then doesn’t actually recover from it is a disaster in good part because nobody seems able to recognize what is truly happening. It results in this increasing wedge of mistrust where economists say the economy is growing yet the people know it really isn’t. Positive numbers are not the goal nor even close to any reasonable, rational standard for success.

Recognizing instability for what it is is the only way out of this global mess.