China Not China: The Greater ‘Evil’ On Its Balance Sheet

China Not China: The Greater ‘Evil’ On Its Balance Sheet

As if we needed more evidence, the Chinese liquidity system is stuck. As much as authorities in China might complain about the global credit-based reserve currency system, as PBOC Governor Zhou Xiaochuan put it in March 2009, and quietly seek out its replacement, they not only allowed it to happen they quite eagerly participated in it so long as it appeared to fuel their economic “miracle.” The monetary system in China is not Chinese; it is at most translated into RMB as its basis is derived elsewhere. And in the world of the late 20th century and especially the first decade of the 21st that means primarily “dollars.”

It is perhaps one of the biggest shocks to traditional thinking where you can very easily observe the eurodollar system’s decay by looking at nothing more than the People’s Bank of China’s assets. While the 2008 panic is notably absent for various reasons (only somewhat related to this specific examination), its aftermath is the most prominent feature. 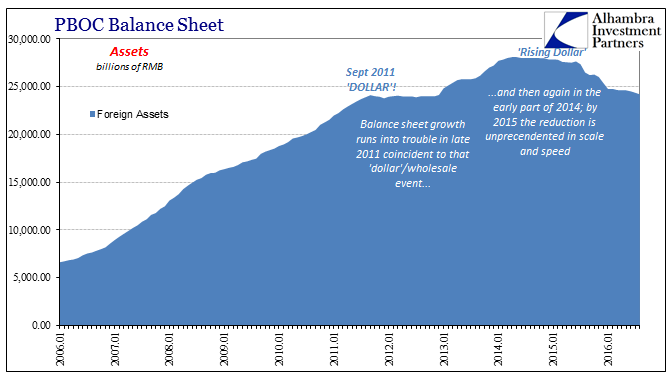 By pegging the yuan to the dollar for so long, the central bank essentially obtained any free “dollars” from its exploding merchandise surplus – as well as a great deal unrelated to pure trade (financial). That kept the currency stable, but it also created the Chinese “dollar” short whereby all those “spare” “dollars” were left on account at the PBOC rather than flow, as is commonly believed, to the importers who needed (and still do) them. As the asset side built up due to foreign accumulations, primarily “dollars”, the liability side (China money) could follow along, meaning Chinese money wasn’t purely fiat in the very strict sense of the term. It was “backed” by forex conditions even more than balances.

You can appreciate the willingness of Chinese monetary authorities to incorporate this odd arrangement; before the 1990’s, China’s economy was a basket case of authoritarianism as well as unevenness. That uncertainty was the dominant view of the currency, as well. Thus, to peg CNY meant to do so credibly, and what better short cut than to “back” CNY by “dollars?”

No one envisioned that the credit-based global currency system would ever run so afoul of regular order. Even in March 2009 when Governor Zhou was pleading for Western authorities to actually understand the world’s monetary arrangements he wasn’t at that time doing so with the expectation that the eurodollar, wholesale format was no longer workable; Zhou just wanted a more stable eurodollar. As you can see plainly on the chart above, it wasn’t until September 2011 that it became clear any such hope was a futile one (though it wasn’t until 2013, it appears, that Chinese authorities finally realized it; which still puts the Communists so many years ahead of the “free market” West in terms of figuring out what is actually going on). The Chinese don’t have the luxury of pretending it is still 1950 – not that “we” have any such benefit, either, only the Chinese monetary system is more directly and heavily affected such that they are forced into direct and immediate confrontation with reality whereas the Federal Reserve merely questions the more indirect economic and intermittent financial effects of the global economy slowly suffocating from the tightening.

Without the “dollar” inflow into the PBOC’s asset side, that leaves only fiat as the option for continuing internal RMB expansion (on the liability side, which is “money”). There are other accounts by which the PBOC can expand on the asset side to deliver bank reserves on the liability side. The problem of doing so is the age-old problem of RMB, the reason it took the forex “dollar” short cut in the first place. The “market”, or whatever is left of it, will view any such naked expansion as “inflationary” and thus “weakening” the currency. It will (or at least the PBOC gravely fears that it might be received in such fashion) introduce further negative currency pressures where the Chinese can least afford them.

Thus, China is stuck; they can no longer count on the asset side growing via “dollars” while at the same time they clearly fear expanding in their own RMB terms lest it further push “devaluation” pressures that would make an already dangerous “dollar” situation perhaps explosively so. The result is direct translation of “dollar” pressures into RMB illiquidity.

In 2016, though it may seem much better surely in contrast to the “global turmoil” of last year, the Chinese have not escaped. The PBOC is still being forced to conduct its operations (both “dollars” and RMB) in a very narrow window. If there is a difference this year it is that they are using all possible space within that window, including more RMB-focused endeavors but mostly at the start of the year. 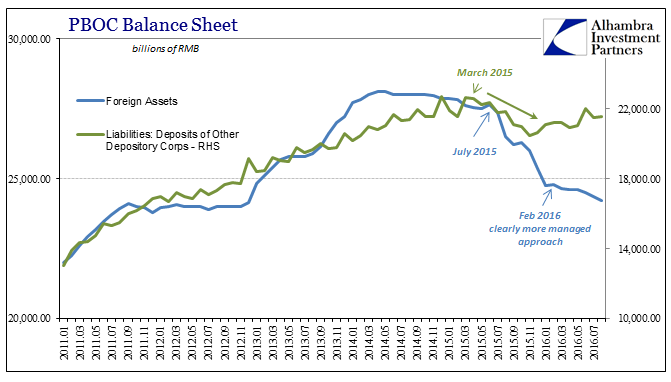 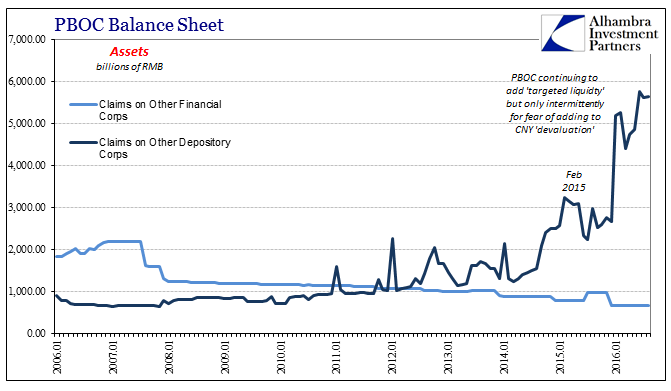 There is clearly a more managed approach to the asset side, but in the end it has only afforded minor positive effects. Chinese money is still being squeezed, just not at the same level of open contraction as in 2015. In fact, the PBOC has such little room for maneuvering that in far too many months the overall level of bank reserves (functional liquidity) is being dictated by central and local government deposits. As government accounts swell, that acts as a withdrawal of monetary capacity (subtraction from usable bank reserves) unless the PBOC offsets it. In years past, obviously, this was never a problem because the asset side was growing under normal “dollar” conditions. 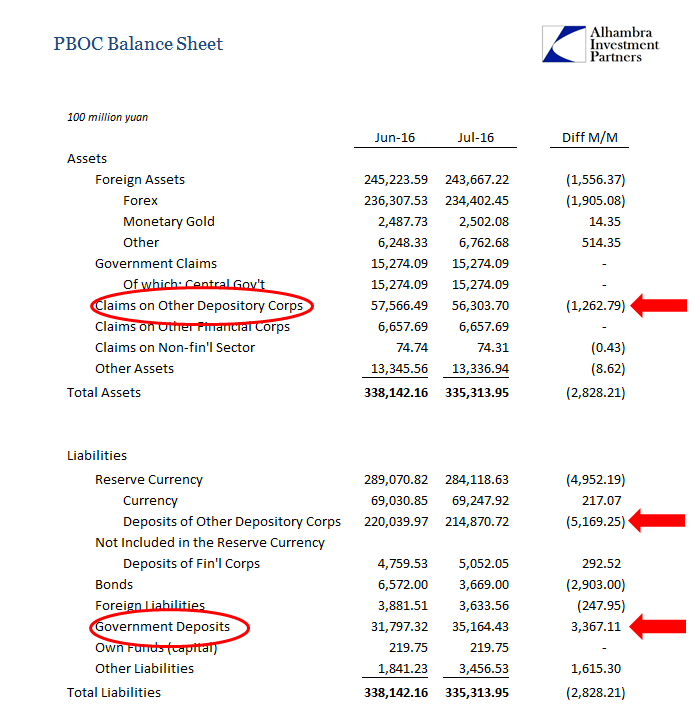 In July, a month that seems to feature prominently in this “something” different transition, we find the PBOC’s asset side once more falling back due to “dollars” (functionally, it is “selling UST’s” though not always in that specific method). With CNY careening toward and briefly below 6.70 in mid-July, you can perhaps understand why the PBOC also cut back in its “unbacked” RMB liquidity – the noticeable decline in “Claims on Other Depository Corps.” Nothing else really changed on the asset side.

The reduction in assets, both “dollars” and RMB, was transferred to the liability side, a burden that was then amplified by an increase in government deposit balances. The result was a large decline in Chinese bank reserves with no offsetting relief anywhere (in monetary policy rates or requirements). I don’t think the Chinese system has recovered from this hit, especially as there was little change in August despite a drawdown in government deposits (adding back some of the liquidity of bank reserves). 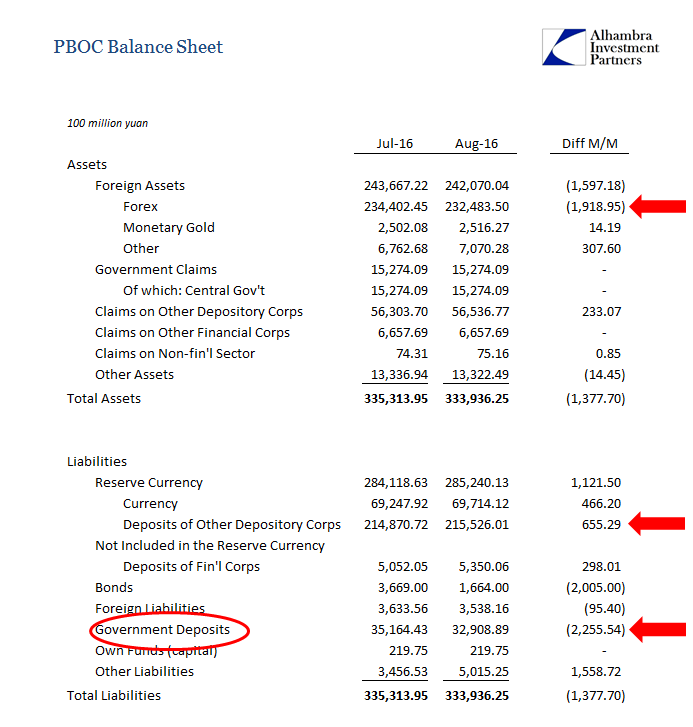 Therefore, to hold CNY at 6.70 and really 6.68 throughout August and into September requires letting bank reserves remain unsatisfied even when government deposits might otherwise be more “helpful.” That is the starting point at which SHIBOR and now HIBOR rates signify only greater illiquidity in RMB. From that we can derive “dollars” as a primary culprit, both through CNY itself as well as through the spillover effects upon the PBOC’s unique non-Chinese balance sheet arrangement. 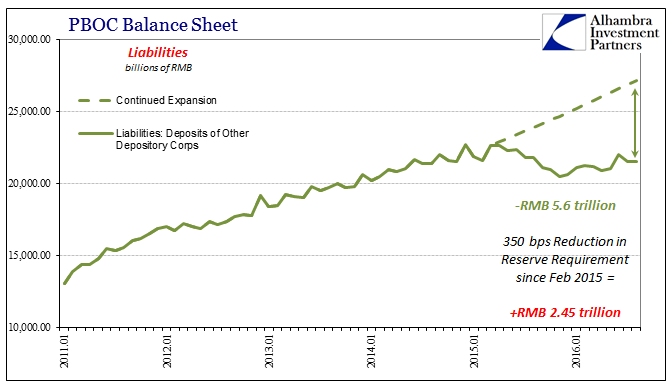 There is some further evidence of this elevated “dollar” pressure from among the more minor line items of the central bank’s accounting. Last October, Chinese authorities instituted a dollar deposit scheme whereby Chinese banks are required to fund 20% of their clients’ forex forward positions by account with the PBOC – but only those clients “purchasing dollars.” In other words, this reserve account gives us a small proxy for negative FX withdrawals of “dollars.” 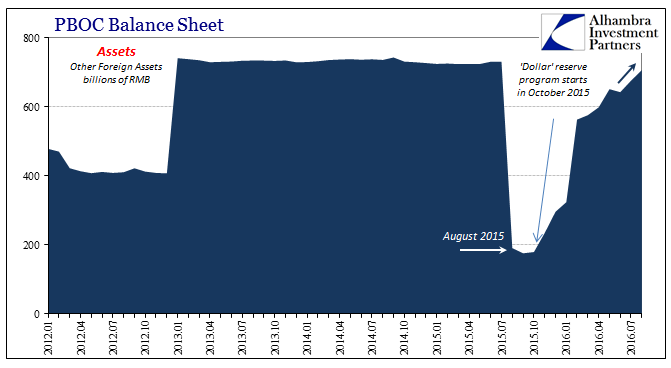 As you would expect, there was a huge wave of such negative pressure accumulated in reserved dollar balances in February in response to the worst of it (so far). After being subdued and even drawn down in June (as CNY was then starting to turn again in May), the reserve account is growing again in both July and August.

Once again, the Chinese are stuck but the way in which they are is peculiar and telling. What I wrote yesterday applies perhaps more so here examining the internal monetary conditions of the world’s second largest economy.

As with the updated TIC figures for July, it has to be that and the PBOC’s own figures show it.