Industrial production fell another 1% in September year-over-year, the 13th consecutive contraction. With that, though the slope of the decline remains unusually shallow like almost every other economic account related to manufacturing and production, the contractions are now lapping. The index level for industrial production in September 2016 is 1.3% less than the level from September 2014; the relevant part isn’t the degree of the slump but the immense and immeasurable cost of time from when it started to where it is now still without sign of an end. 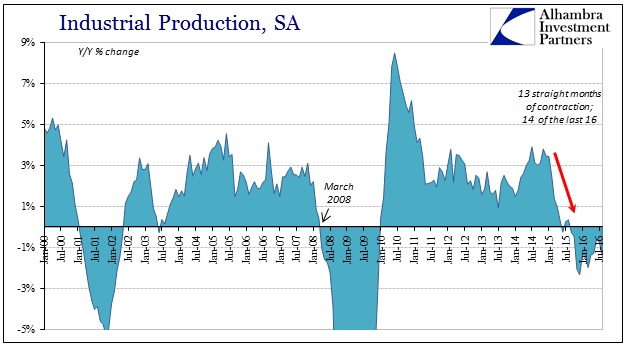 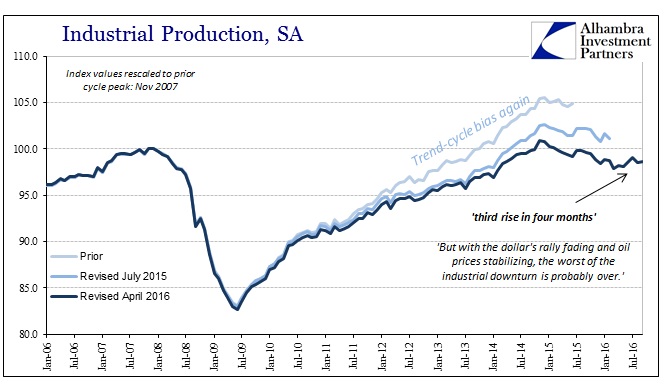 This pattern defies outright conventions that remain wedded to the binary options of a traditional business cycle, and so it ends up in confusion. Though the IP index in September remains less than what it was in February, the indication that it has been up in three of the past four months (seasonally adjusted) is what is reported. The idea that the economy may not now be getting (visibly) worse is in the binary paradigm the same as if it was getting better.

But with the dollar’s rally fading and oil prices stabilizing, the worst of the industrial downturn is probably over. A survey early this month showed an [SIC] acceleration in factory activity in September, while new orders for manufactured capital goods have increased since June.

How many times have we heard before, “the worst…is probably over.” That precise message has been applied to every other statistic at one time or another (often repeatedly) over these past two years. Yet, despite every expectation that because the economy didn’t fall into recession at the start of this year growth has been restored, there is only the continued and distinct lack of it each time. As I wrote last week with regard to Chinese exports (related by way of the mood of the US consumer):

I am as tired of writing about it as you are of reading it. The mainstream is by convention of the business cycle forced into linear extrapolations. Therefore, economic accounts are interpreted as nothing more than whether or not they add or subtract from the preponderance of growth vs. recession. And in the often case of acceleration, especially when negative numbers become less negative, the collective sigh of relief coupled with definitive proclamations of “it” being over passes beyond into tangible cheerleading quite apart from objective analysis.

Within the IP set, that is perhaps most evident and concerning at the same time with regard to automobile production. Motor vehicle assemblies first rose to 12.2 million (SAAR) units in November 2014, and the Federal Reserve estimates that almost two years later the level of production is about that same number. While that may be somewhat of an unfavorable comparison to the usual volatile uptick, domestic production at the very least fell off somewhat sharply at the end of last year and though it hasn’t (yet) gotten worse it hasn’t been undone by real growth either. 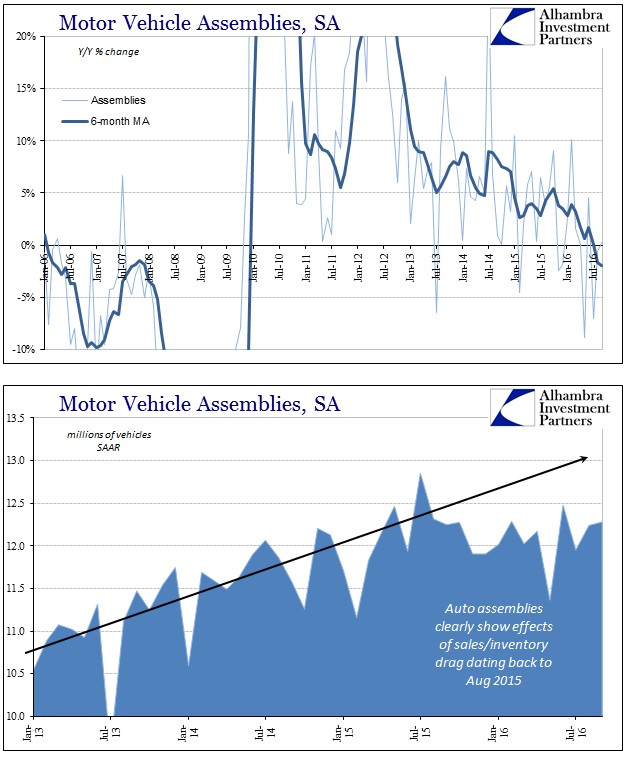 More or less, auto production was removed from growth and seems to have remained stuck in such a curious state. The reason for it is quite apparent as a matter of both inventory and sales – consumers. Total vehicle sales, which include US purchases of imported vehicles, have also and at the same time met this “plateau.” 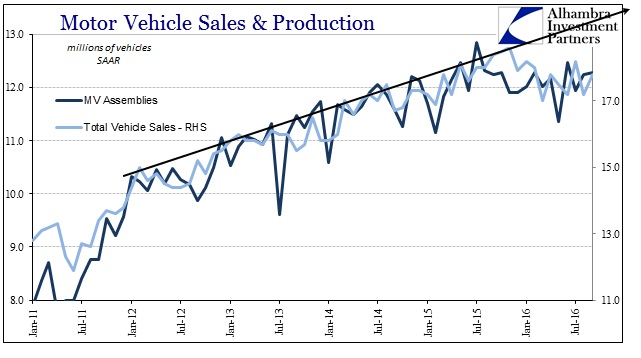 As each additional month passes without growth, the further behind the prior trend the industry falls. Though the numbers say that there is growth in at least the month-to-month comparisons, in the real economy this is not it. Real adjustments will have to be made as these lags force businesses to face up to the consequences of not keeping up to where sales “should” be and were expected and planned to be.

The Ford Mustang was once a hot seller, but interest in the two-door cooled off significantly in September. The pony car saw a 32 percent decrease last month compared to the same period last year, and that has caused Ford to idle the Flat Rock, Mich., plant in order to match output to demand.

To this point, these kinds of smaller adjustments are all that has been required – which is apparent in the sideways rather than growing trend of MV assemblies. After some unknown amount of time, however, actual growth will be demanded based on profitability projections that have to be rescaled as stagnation (at best) stubbornly continues. If sales refuse to cooperate on the topline, there is only so much minor tinkering that can be done to keep the bottom line from conditioning more economically serious responses.

These are normal recessionary processes (especially as a response to inventory) that are instead of being condensed into a matter of a few months all over all industry have been spread out over two years (or more in some cases) and thus confounding that traditional, business cycle analysis. Even the oil sector, where declines are now pronounced as well as expected, took more than two years to fall into such a state. The reaction was initially the same; growth of production first stalled and then seemed to gently decelerate. 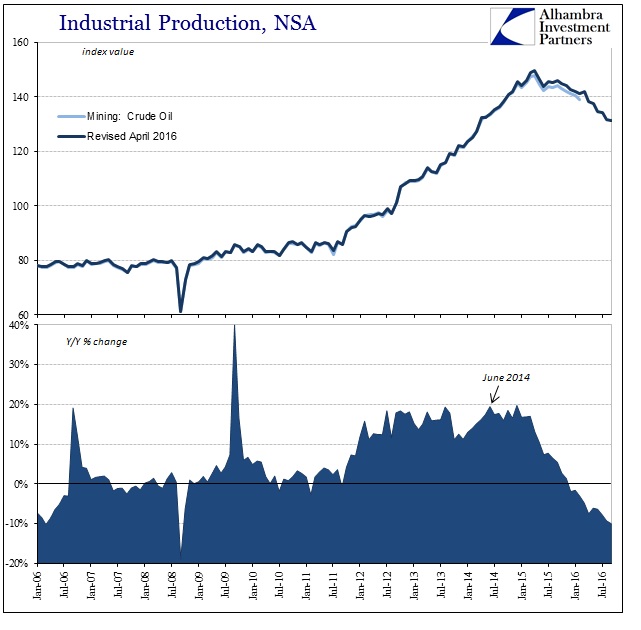 It wasn’t until later 2015, well more than a year past where oil prices had started below $100 (and nearly a full year after they started crashing), that IP for oil shows actual declines; and another half year still before the drag becomes significant. The reason for that is perhaps the same as has been propping up the slow-burn of economic decay – weakness was supposed to be “transitory” and it was taken that way because economists still are treated as if they know something useful about economy. In oil specifically there was no initial alarm since Janet Yellen and her “printing press” were positive inflation, recovery, and therefore robust demand was quite near. The unemployment rate appeared to back up her claim.

It wasn’t until oil prices fell a second time last summer that the situation was taken more seriously; and then further impressed this year that economists clearly don’t know much if anything about the economy. For automakers, there may be something of a similar dynamic at work, where they also believed in “transitory” as it wasn’t until this year and really the middle of 2016 where they began to realize as oil producers there truly was and is “something” else going on.

For the umpteenth time, lack of further intense contraction is not at all the same as, “the worst of the industrial downturn is probably over.” There is more than enough just in industrial production figures to suggest that though “it” has “somehow” been happening for two years already, “it” is still just getting started.