The 2014 Economy Lingers On Under The Hope For Something Different

The 2014 Economy Lingers On Under The Hope For Something Different

For the month of July 2014, total durable goods orders exploded higher in a fit of Boeing. The growth in aircraft orders in percentage terms was so large as to be meaningless. On a seasonally-adjusted basis, total durable goods (using the latest benchmarks) went from $236.3 billion that June to $290.8 billion for July. Coming as it did in the middle of 2014 when it had seemed as if everything was on the up, it was just more embarrassment of riches for the US as the “cleanest dirty shirt” just about to be put into the washer.

Of course, the surge in transportation orders heralded nothing for the actual economy, as by the time those estimates were published (and originally the overall estimate for that month was nearly $300 billion) at the end of August 2014 the economic direction had already taken the opposite route. It was just another in a long line of positive numbers, and truly a big one, that have been consistently taken for recovery. An actual growth period, by contrast, is not one with an occasional big number, but one where those become the norm and therefore small positives are the aberration to be set aside.

We are seeing something of a repeat if in miniature with durable goods for October 2016. The seasonally-adjusted estimate for September was $228.4 billion, jumping to $239.4 billion in the latest update. Civilian aircraft orders, notoriously volatile, were up almost 140% while military aircraft orders grew by a third. Commentary has been, as you would expect, extremely positive. 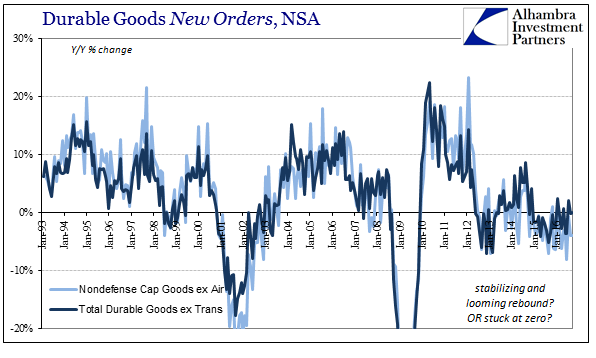 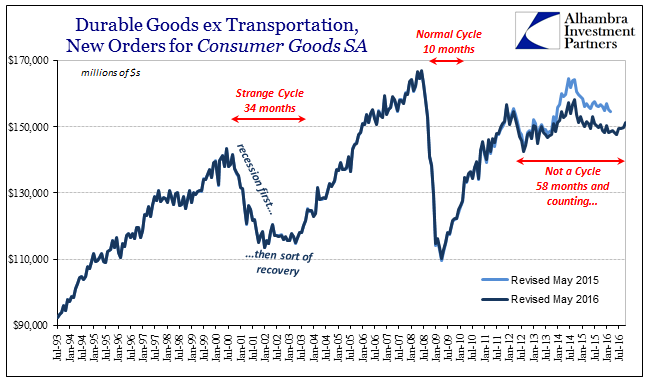 Underneath, however, we find the same economy dragging on in place since the aircraft surge in July 2014. Durable goods new orders ex transportation were flat again year-over-year (-0.07%) in October for the second straight month. Likewise durable goods shipments were also practically unchanged (-0.24%). Capital goods, on the other hand, continue to contract. New orders for cap goods minus aircraft and defense orders were down 4% for the second straight month; shipments fell more than 6% in October after declining more than 5% in September. 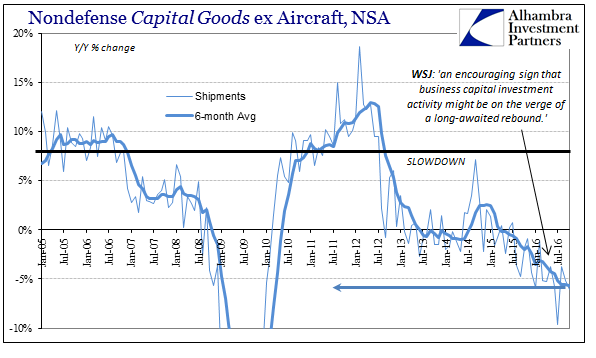 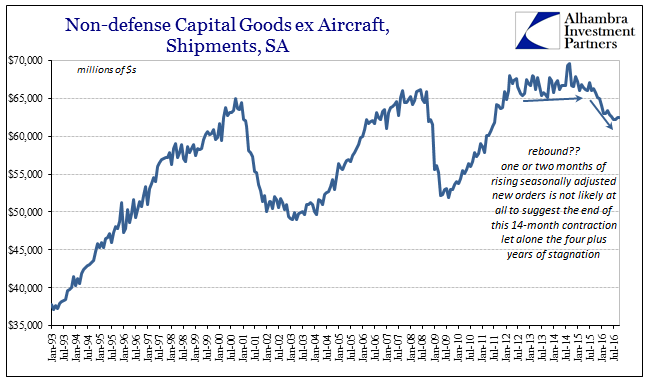 This is, again, the same languishing US economy that has been an enormous drag on the global system. There aren’t any meaningfully different changes as indicated by durable goods by which to generate appropriate excitement. Economists and the media have, obviously, been intermittently positive about a great many positive numbers over the past 27 months of slow, uneven contraction. What has seized “market” attention is not what is clear the same but what might be different.

At this stage of almost relatively euphoric sentiment, up-to-date economic statistics will be less meaningful because “markets” are seeing what they want to see about a future that is no longer captured strictly by more of the same. That means central banks no longer so pasted to just QE or ZIRP, but more willing to try different things. As it pertains to the election, there is a Trump administration that could, in theory, provide “stimulus” and not just in the same wasteful, ARRA manner; changes to taxation, regulation, etc.

In other words, the future has suddenly become a blank canvas upon which to project all the positives that were once claimed about “stimulus” in the generic sense. People largely still believe that it works; if anything is different especially after 2015 and the start to 2016 it is more that the public now clearly sees at the very least QE and central bank “stimulus” wasn’t of the wrong quantity but at least the wrong kind. If the prior regime was populated by the “wrong” stimulus, then it might be a far better future should the next one find the “right” methods.

No matter what durable goods, or any economic account for that matter, shows about the current economy it will be difficult to overcome this irrationality, which is now almost purely focused on what could be just over the horizon. Since the figures for the rest of 2016 will be rightly considered as part of the “old” “stimulus” regime that failed, unless they start to indicate a more serious slide I can’t imagine the mainstream will give them much thought at all – except where, like aircraft orders, it might seem to fit the narrative of a pickup.

The only real question is whether or not what central banks or the Trump people might do different is actually different. A second ARRA is going to produce the same results as the first, which included a great deal of tax cuts. Some have started to suggest that it would amount to a practical “helicopter” of stimulus without explaining why those practical “helicopters” before didn’t work, either. 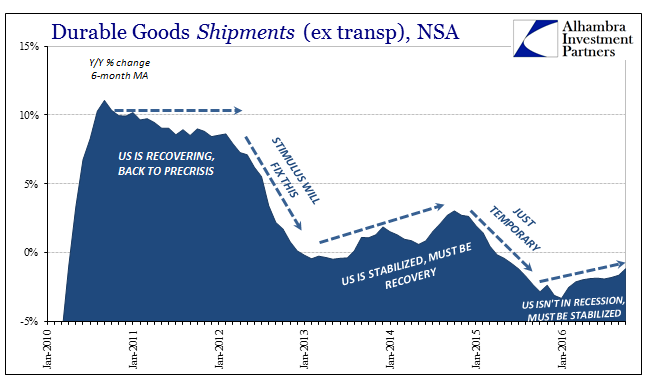 In a bigger sense, however, there does not seem to be any willingness anywhere to actually take account of why the economy for more than two years has been stuck in a state of low growth and even, as the goods economy, steady contraction. It is a curious incuriosity, particularly given the irrational hope for different efforts equaling different results. If “we” don’t really know why the economy fell off rather than surged ahead as ecnomists had predicted after July 2014, then why would there be any reasonable expectation for “different” right at the start?

After all, the people who will be still running “stimulus” are those who had no idea what was going on then, less idea what that meant for the immediate future, and still today can’t explain what did happen. By that I mean all economists in general, and as far as I can tell that includes those of the forming Trump administration, as well as (for now) those in place at the Federal Reserve who are very likely to press ahead a second time to confirm that they think there isn’t actually anything immediately wrong with the economy to begin with.

It seems to be a corollary to Einstein’s definition of insanity; keep the intellectual paradigm in place but doing slightly different things and expecting very different results. Durable goods confirm that the same 2015-16 economy still lingers, a fact that none of them thought likely or even possible. It’s nice to contemplate how “new” blood might finally get it right, but is what is being proposed now actually new and different? Can you really claim to have the right answers when it seems clear that you don’t know the questions?

I suspect we are about to find out, all over again, the hard way.