The most basic link in finance is that between risk and reward. Just like alchemists who once sought a path to gold from lead, a great deal of modern finance was built around finding a shortcut between them. Discovering the great asymmetry where risks would be low but rewards sky high was the Holy Grail of later 20th century mathematics. If you studied advanced math or economics (same thing, unfortunately) at an Ivy League school at that time chances were that at the end of your college career was one on Wall Street.

It was almost like a series of Nigerian princes had descended upon the financial districts of each of the world’s great money centers, promising each and every bank (really “banks”) as much wealth as they could possibly want should they only take a small risk. The most famous of them was Robert Merton and Myron Scholes, who got involved with LTCM, and though they nearly brought down the financial world in 1997 and 1998, that was merely the re-imposition of risk/reward that had never really been altered.

That was one of the great ironies about LTCM. It introduced math in a way that actually preyed upon biases. The allure of math is its scientific senses, the way in which it is pitched under objectivity, as if great formulas and complex equations can see the future because there they have no emotion or individuality. In truth, this financial math is sleight of hand, a magic trick performed by the best of illusionists.

Despite that spectacular failure, everyone on Wall Street and Lombard Street set out to be them anyway, until 2007. When risk/reward was finally appreciated as something as close to an immutable law as there is in finance and economy, it all practically ceased for a time. The death of the eurodollar system is about that more than anything else. Banks pre-August 7, 2007, grew as much and as fast as they could because they believed the scales had been tipped in their favor by the asymmetry of math, the modern alchemy of complexity that in the end fooled more so those on the inside employing it than the vast majority on the outside wondering what the hell had happened.

A great deal has been made about regulation in the years since the crisis, particularly that it has been effective in reducing or eliminating the same behaviors that caused it. This is post hoc ergo propter hoc fallacy, for regulations never, ever stand in the way of Wall Street (or Lombard Street) on a mission. If there was a realistic path back to the mythical asymmetries of post-1995 balance sheet expansion, does anyone really believe that it has been Dodd-Frank holding them all back all this time? In addition to the mass of Ivy League mathematicians they hoarded, the big banks also amassed an army of Ivy League lawyers by which to plow through any obstacles to reaching the Holy Grail. Money is no object when the object is “money.”

On the same day that President Trump signs Executive Orders to begin the process of the repeal or replacement of Dodd-Frank, Deutsche Bank announced that it was cutting 17% of its equity unit and a further 6% in fixed income though that piece of the business has already been pared back enormously already. As always, litigation costs are the media-driven culprit when in reality if DB thought there was an avenue for growth via renewed balance sheet vigor these would be mere hurdles to cross as they chased ever-forward expansion in FICC and employed maximum leverage throughout.

In other words, what is missing is reward, especially under conditions where there are no longer illusions about risk. The last time DB moved all in that direction was 2014, and it does so in isolation nearly ruining them all over again. This is what is so significant about the events in 2011 and why it should be studied equally if not more than 2008.

MR. SACK. I would actually like to argue that the declines on Monday were not entirely driven by the downgrade. I think they were a continuation of the decline in sentiment and the concerns about economic growth that we had already seen develop very intensely over the previous week… My point would be that the downgrade just added to that, but I think the primary driver of all this is really the revision to the economic outlook…

And I think it’s worth pointing out that this is all happening with $1.6 trillion of reserves in the system.

You just don’t commit to massive amounts of internal (thus hidden in math) leverage in an environment where even two QE’s have no effect on either the economy or funding! It wasn’t Dodd-Frank or Basel III that put turmoil upon the repo and FX markets then, it was instead the combined Oh Sh## moment where banks realized they were still holding massive prior risks without the expected recovery by which to deal with them. What happens if you expect to repair your balance sheet with retained future earnings only to find that isn’t so easy and guaranteed as you thought given that money printing turns out to have been “money printing?” You shrink. Period. The faster the better. The more that condition extends, the more you shrink. If you don’t, you become all risk with no possible reward (DB). 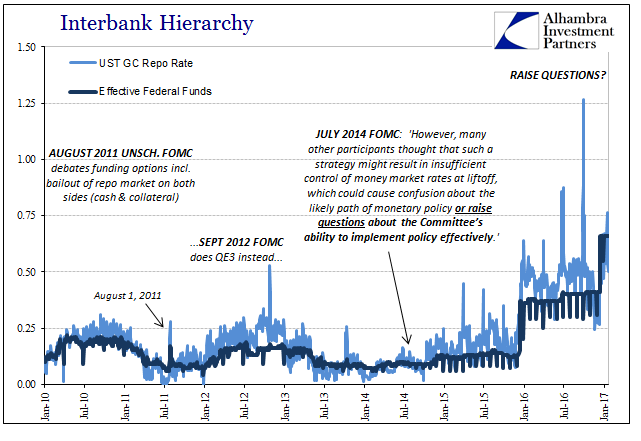 The fatal flaw that was considered in 2007 (rather than LTCM 1997) but proven beyond doubt in 2011 was that so long as whatever bank liability any eurodollar bank might create was considered currency, further balance sheet expansion would thus create all the “dollars” necessary to fund it. Thus, that fatal flaw was its circular reasoning, that balance sheet expansion created “dollars” which funded balance sheet expansion, creating more “dollars” and so on. Remove the expansion and the inconsistencies, risk primarily, implode the whole intent. Like a spinning top, it can only ever be stable at high rates of growth, because when it slows everyone starts to question whether that math-as-money is actually real or merely, like alchemy or the Nigerian scam, an impossible dream.

The difference between 2011 and 2007 was as I wrote earlier this week, that in 2009 even the eurodollar futures market believed (perhaps more like hoped) the Fed could possibly be a substitute with its balance sheet expansion, but by 2011 these banks knew for a fact that it could never. 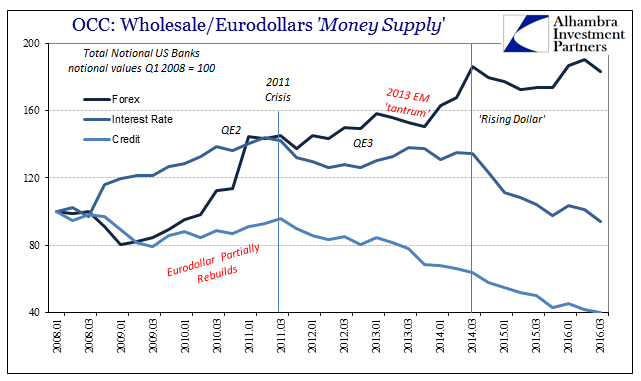 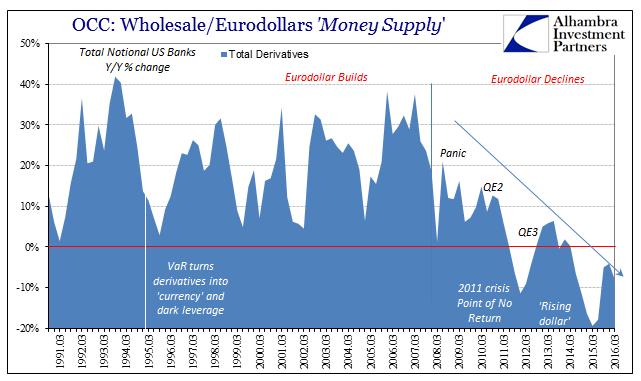 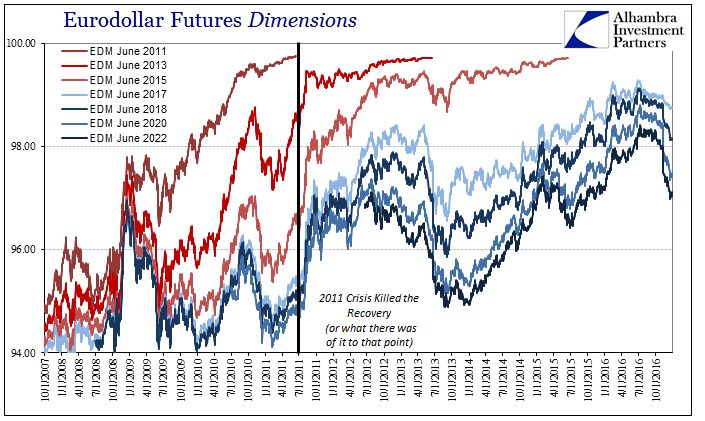 Without recovery, there would be no “dollars”, indeed could be no “dollars.” Regulations were just kicking them when they were already down, an assignment of causation that just doesn’t meet the facts. Removing Dodd-Frank won’t solve the eurodollar, because the eurodollar’s problems are far, far bigger than Dodd-Frank. We are way, way past Humpty Dumpty time. You can bring back prop trading, but you still have to have asymmetry for banks to trade in it. That ship sailed for good in late July 2011.