It is understandable why everyone is right now fixated on Washington. The repeal, or not, of Obamacare is, to paraphrase former Vice President Biden, a big deal. In terms of market expectations, it is difficult to discern by how much. That was to be, after all, but one step of several reductions to the administrative burden on the economy. Maybe as the first it is given outsized importance not because it might deliver the biggest impact, but rather because as the first it can tell us something about the realistic nature of what is supposed to happen differently under a Trump administration.

Even though to this point it has been a disappointment for the “reflation” idea, I believe it is more so a distraction to parts that may be far more important. Attention might better be removed to Oklahoma than DC. As noted yesterday, there has been a sizable shift in the dynamics for oil, far removed from the interminable nature of “stimulus” politics. It has been oil above all else where “reflation” is governed, given the gloss of realism first by its rise from the ashes of last February and then at first its apparent staying power, lingering above $50 for months so as to allow those political hopes a realistic basis by which to cling on for however much longer. 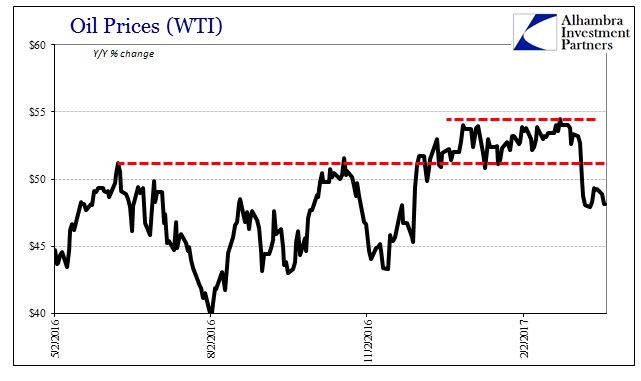 Physical fundamentals are ruthless, though, and have a tendency to ruin mistimed romance. The connected nature of inventory in gasoline and crude point to the underlying truth of today, which toward the end of March 2017 probably should have by now at least started to look like that tomorrow.

Patience is virtue, as the saying goes, but it will always be scarce; malleable at times, sure, but overall scarce nonetheless. As time has passed under “reflation” of pure hope, patience has been tested at several points so far. In recent days, though, the furthest challenge yet has been issued based primarily on oil – though it’s effects can be felt far beyond the energy space. From eurodollar futures to JPY (and its breaking relation to CNY) to now inflation breakevens, “reflation” is starting to roll over. 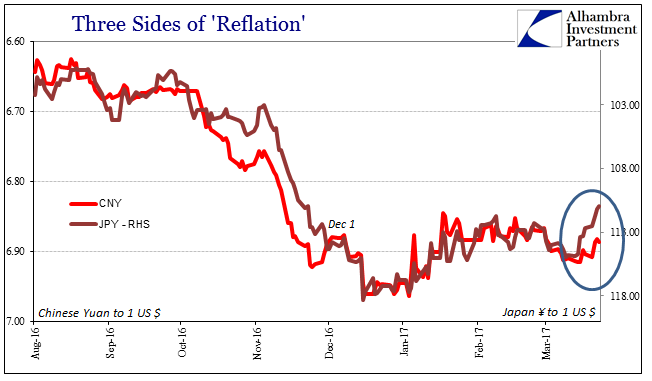 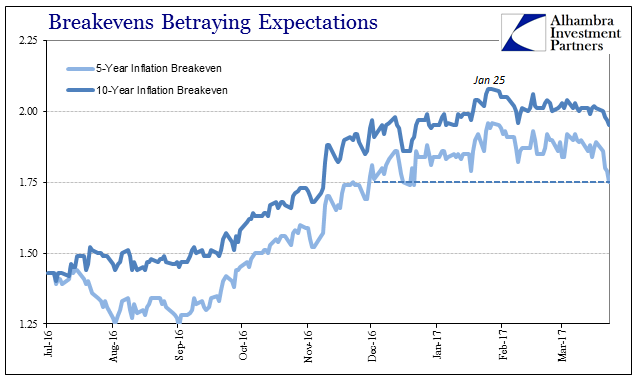 Breakevens, particularly the 5-year maturity, follow WTI quite closely. So far, this possible inflection hasn’t yet punctured the 5-year/5-year forward inflation rate, a reflection of what policymakers call “anchored” expectations, but given that this measure of expectations is at its recent high equivalent to past crisis lows there isn’t much room for the rebirth of widespread doubt. Coupled with the fact that the forward rate has lacked momentum for several months now, there are risks building much more to the downside than toward continued optimism. 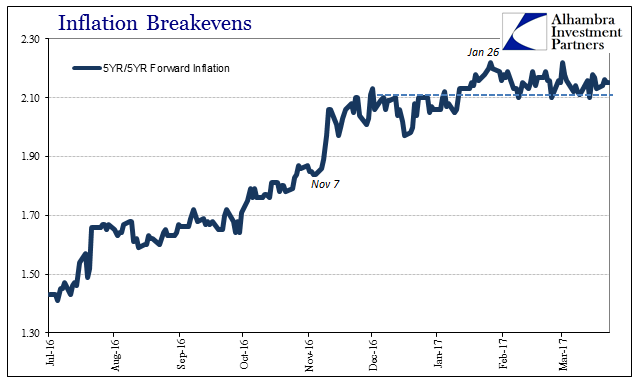 And it will be doubt that will be transmitted through not just inflation expectations but coincident inflation measures, too. Without significantly higher oil prices, either the CPI or PCE Deflator’s flirtation with or above 2% will be brief; given the commentary surrounding both the economic conditions this year relative to last year as well as how “rate hikes” are often described and why, any serious deceleration in inflation might come as a big enough shock. 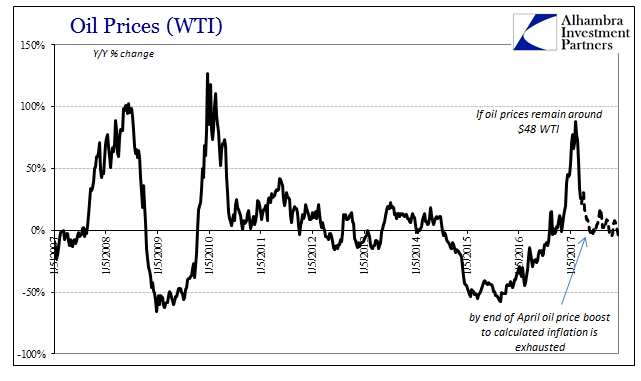 I wrote back in late January, right at the peak for breakevens:

That’s why…it will be difficult for oil prices to more fully embrace “reflation” in a way that other asset classes have already. Before things can truly go back to normal, something must be done about what happened over the past few years. “Reflation” is mostly about what could happen tomorrow, but oil, in particular, can’t just ignore yesterday.

For the most part, it hasn’t. The WTI futures curve, for example, has found an eerie sort of stability pegged at around $55, with mild backwardation in the middle. That suggests, strongly, oil investors don’t expect oil to go much above that level for quite some time. With the familiar “hook” in the front end of the curve, the risks remain still to the downside.

In other words, we are stuck until something legitimately changes not in terms of future hope but now, and in a big way. Unfortunately, that just isn’t likely to happen, and I would make the same prediction even if the Obamacare repeal was a done deal. Oil never did fully embrace “reflation” because it couldn’t, and that tells us something more profound about the deeper state of affairs than the drama in DC. Only now it may be the growing case that everything else will re-embrace the downside of oil stuck in yesterday instead of oil joining the party for tomorrow.