What Matters…and What Doesn’t

What Matters…and What Doesn’t

Far be it for me to defend Mario Draghi, but earlier this month when it was revealed that Eurozone inflation burst above the 2% target level for the first time in four years the mainstream characterized his demeanor as being more than what it really was. That says something about the media as well as Draghi, where the former is at times more eager for the latter to be right about something, anything. After spending years hounding the ECB to give in to QE, apparently not really understanding why Europe’s central bank was so reluctant to do so, the lingering drama over its obvious lack of success was enduring.

On March 10, however, the Financial Times could no longer contain itself, declaring proudly:

Mario Draghi has declared victory against deflation and moved a step towards ending the European Central Bank’s ultra-loose monetary policy, sending the euro and German bond yields higher as investors bet on the end of crisis-era stimulus measures.

Again, the ECB chief never really did that, as his remarks were in full more modest because he knew full well that unless oil prices kept going (and at a quickening pace) it would be a fleeting victory at best. And if it came to that, the ECB would look even worse than it already does (outside the media) about still another primary parameter.

The first piece of evidence confirming Draghi’s more measured approach was delivered today in the form of German inflation for March. Being pulled up by Brent in February, it was much less so this month, particularly as oil prices retreated at the start of it. Last month’s 2.2% is replaced this month by a mere 1.5%; and so the Financial Times’ grand victory celebration is canceled several months earlier than previously estimated by more rational analysis. Without Germany’s contribution, there is very little chance the 2% mark is maintained on an EU basis for more than just the one solitary month. 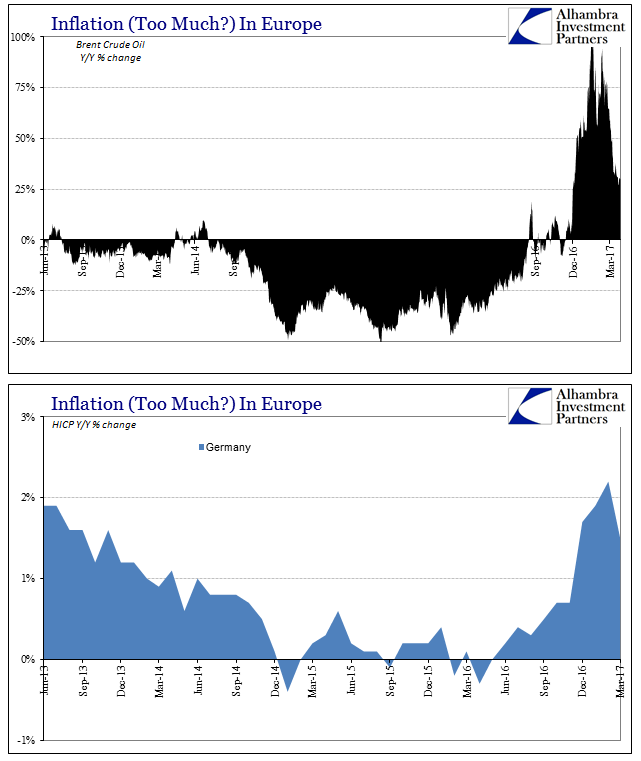 The most remarkable part about all of this is the one thing nobody seems to appreciate (or even be able to). The ECB, as the Federal Reserve, has engaged in the most radical monetary experiments in history; programs that ten years ago would have been branded absurd, far outside the boundaries of good sense. For all of that, through all of that, the inflation needle moved not even a little. There has been no effect or detectable trace of any of them. I write for tomorrow:

Oil prices, by virtue of nothing more than being up off the bottom, have accomplished what no central bank ever could and in the one area where money and monetary policy are supposed to matter the utmost.

For all the trillions in euros, it is only oil that delivers 2% inflation – and the promptly takes it away. For all the talk about “ultra loose” monetary policy, what this demonstrates, conclusively, is what really matters when it comes to money; and that isn’t a central bank anywhere in the world. The price of oil is set by “dollar” conditions, meaning that yet again we see what truly matters, and what truly doesn’t. 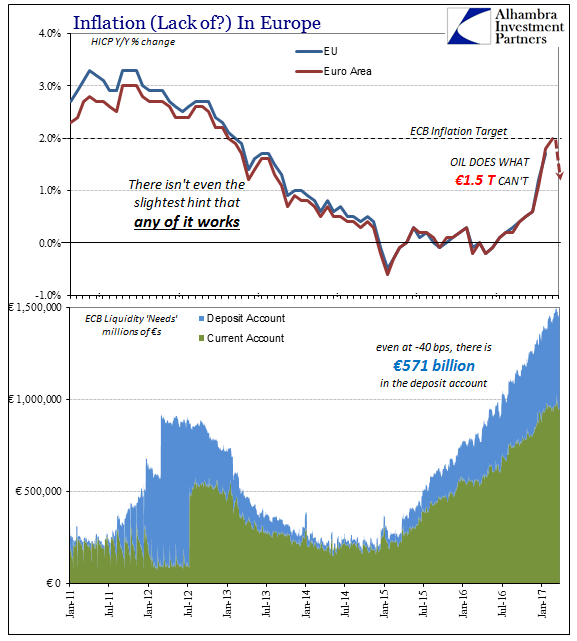