Repeat 2015; An Embarrassing Day For The Fed

Repeat 2015; An Embarrassing Day For The Fed

Today started out very badly for the FOMC. At 8:30am the Commerce Department reported “unexpectedly” weak retail sales while at the very same time the BLS published CPI statistics that were thoroughly predictable. Markets, at least credit and money markets, have gained a clearer idea what the Fed is actually doing and why. It’s not at all what the media suggests. 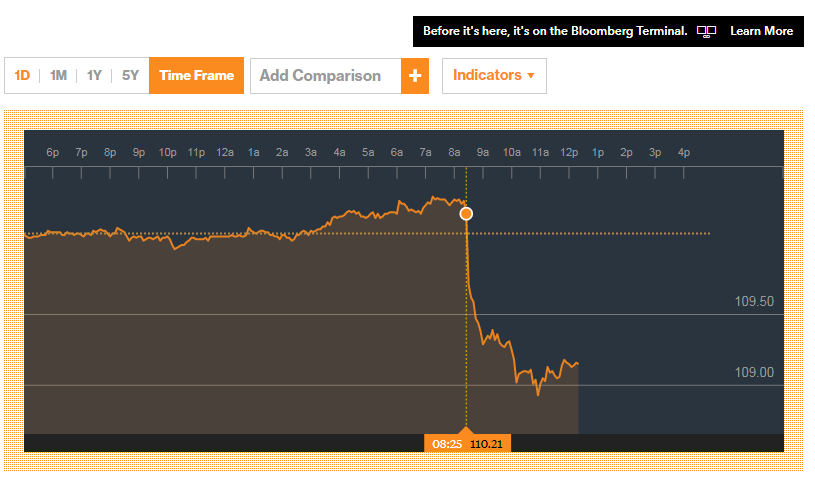 Since everything trades off JPY, the one chart above captures the reaction very well. On a day when the Federal Reserve, Alan Greenspan’s old haunt, raised the federal funds corridor, it was the opposite all throughout the financial markets. Eurodollar futures, which are supposed to match policy expectations, instead have traded directly against them. Since March 15, the last RHINO, eurodollar futures have been enormously bid. It’s 2015 all over again, at least in this one aspect. 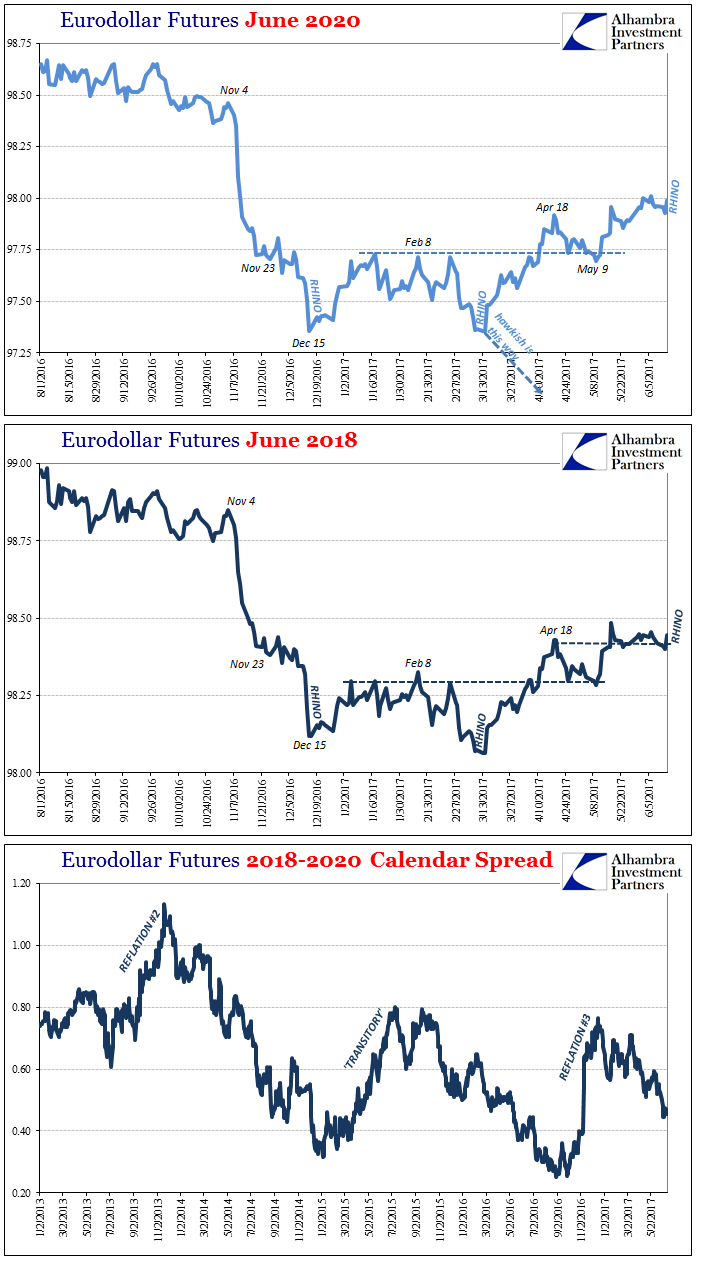 Nothing really has changed since then, which is the whole point. The Fed is raising rates not because the unemployment rate is so low which means the economy is about to get so good. Rather, it is thinking about all its various exits because the unemployment rate is so low and the economy never changed. What did change is official belief about that one expectation; throughout 2014 and 2015, they believed the economy was poised to take off, where risks would be rebalanced toward “overheating.” Instead, they’ve been left to talk about wage acceleration all this time without any, as revealed yet again by inflation figures.

According to business contacts in a number of Districts, many firms looking for new workers said they had been raising wages selectively to attract them; some had also begun to raise wages more generally.

That quote wasn’t plucked out of the policy statement issued today accompanying the latest RHINO, rather it was pulled from the meeting minutes of the June 2015 gathering. That one was supposedly “hawkish” and therefore more like this one that actually voted for an increase, yet the justification is somehow still the same. There are but “signs” that wages will accelerate. There are always signs.

The rest of their maneuvering is nothing more than a sleight of hand, an illusion designed to keep people thinking that this is June 2004, maybe even January 1994. Nominal interest rates dropped more without balance sheet expansion than with it. Should we expect unwinding that expansion will somehow have a large effect? The eurodollar curve, on the other hand, puts to rest all those notions (and then some). 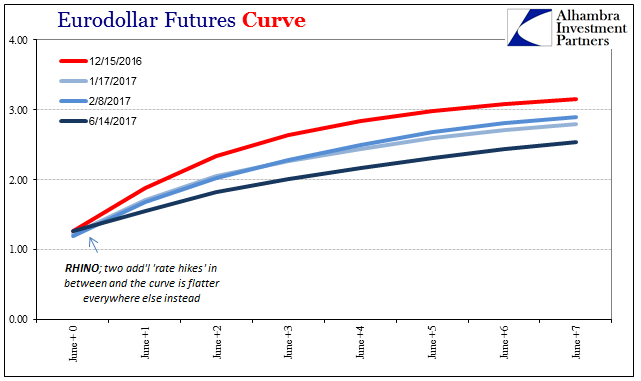 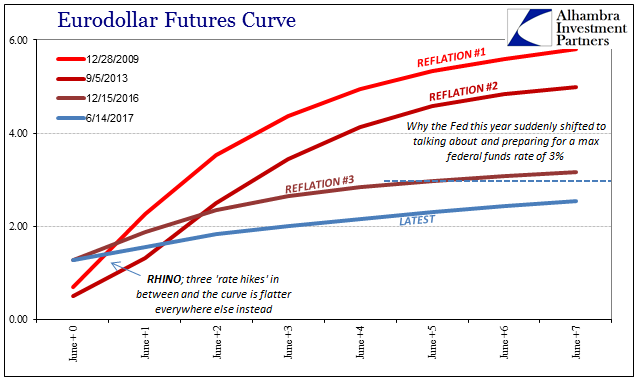 It took a decade of constant failure, but the Fed is finally acting its true part. It is irrelevant. The “rising dollar” didn’t so much kill the recovery as expose this very fact. The media will still talk about the central bank as if it is the center of the monetary universe, but that is nothing more than Ptolemaic philosophy intruding upon the precipice of the age of monetary enlightenment.

Think about this. Oil prices in the space of just a few months delivered 2% inflation, and then took it right back in predictable fashion. That’s more scientific than anything monetary policy has done for ages. The Fed through four QE’s, seven years of ZIRP, and now four “rate hikes” couldn’t manage to move that rate even slightly in either direction. Today was an embarrassing day for the Fed, but that, too, is nothing new.

The bond market is no mystery. It’s just ahead of the (mainstream) curve. Again. 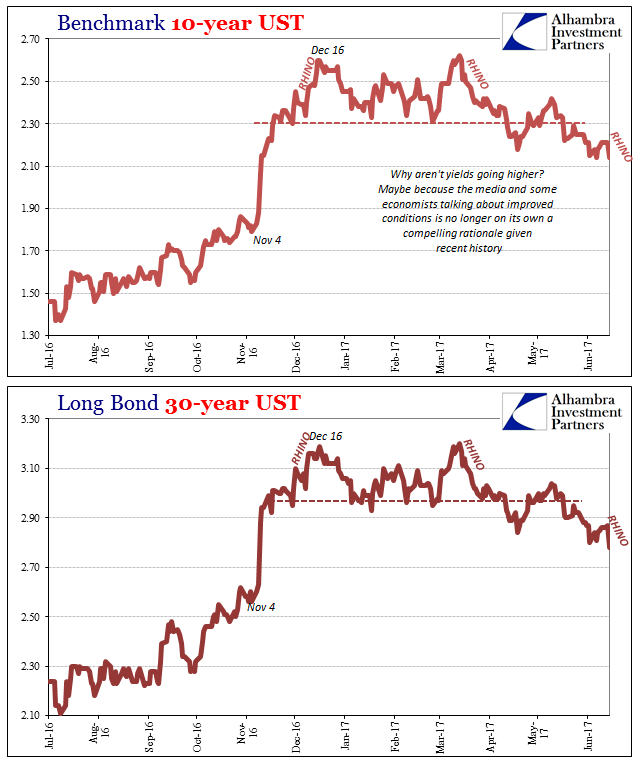 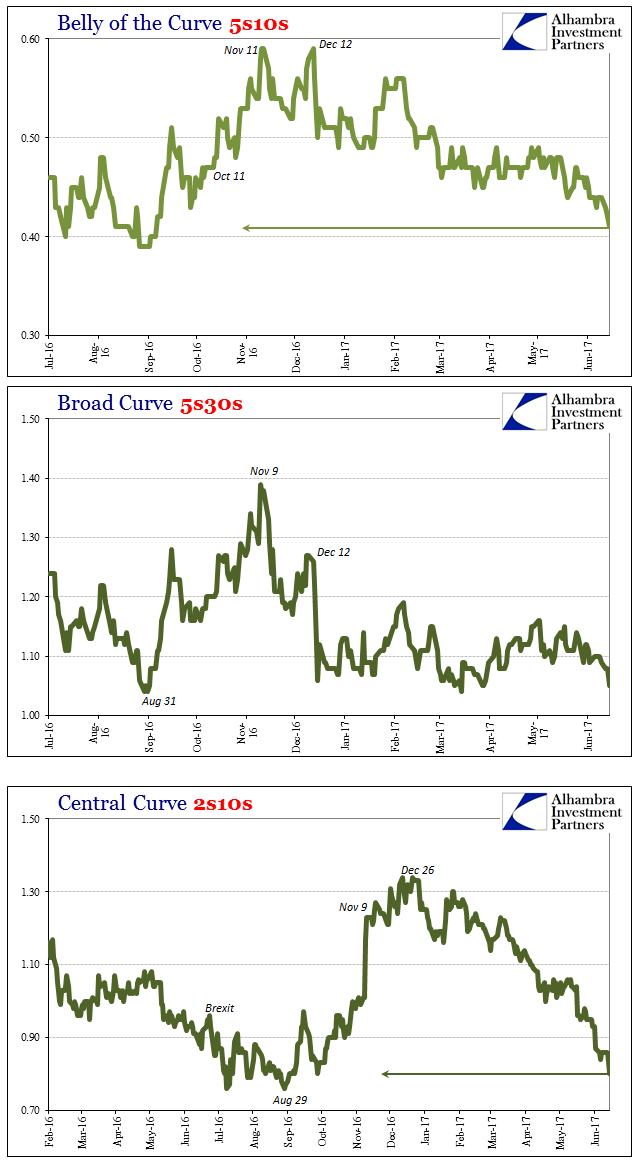