It’s Not The Downside, Where’s The Upside?

It’s Not The Downside, Where’s The Upside?

The IMF like so many others appears to have been caught up in “reflation.” Its models had in its April 2017 WEO outlook upgraded US growth prospects for the first time in a long time. In their final 2016 WEO, the institute projected US real GDP growth of 2.20% for calendar year 2017, and then just 2.10% for calendar year 2018.

Those figures were upgraded after the burst of positivity in markets leading to suddenly higher inflation estimates worldwide. It looked, on the surface, as if things were finally changing for the better. As of April, the IMF was expecting 2.31% expansion this year followed by acceleration to 2.52% next year. Some of that was due to the difference between 2016 and 2017, as well as some uplifting effects of probable further “stimulus” from the incoming Trump administration. 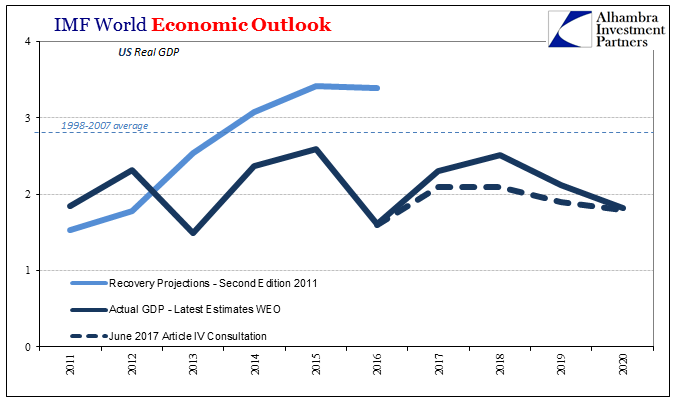 Under Article IV of the IMF’s Articles of Agreement, a team visits the various member countries annually to hold discussions with officials as well as gather more comprehensive information. A report is generated and then submitted to the Executive Board, including updated projections outside the WEO format.

Concluding their Article IV consultations with the United States, the IMF now projects lower growth this year and especially next year. The previously forecast acceleration has now disappeared, and the growth trajectory for the US economy according to the IMF is far too consistent with previous years. “Reflation” is for them now gone just that quickly.

Policymakers in these various places, including here in the US, keep talking about “transitory” factors holding back economic prospects. Somehow they continue to refer to mysterious “headwinds” that don’t ever abate. The effect of this after so many years is to among other things create a large disconnect between what economists are talking about and what the rest of the world’s population actually perceives.

The previously forecast “improvement” under “reflation” assumptions from April was to 2.5% growth next year. While that would be better than recent years, even if it did occur it would still be significantly less than the 1998-2007 average which included a full-blown recession in it. That’s not really acceleration except by the technical definition.

More than that, however, nearing a decade later it still doesn’t yet account for the Great “Recession.” The US and global economy contracted violently in late 2008 and early 2009, and there hasn’t been any robust period since to make up for it. Thus, the economic problem remains two parts – the as yet contraction left still to be addressed and then the growth baseline that is substantially less than it used to be. The economy not only shrunk, it got slower, too. 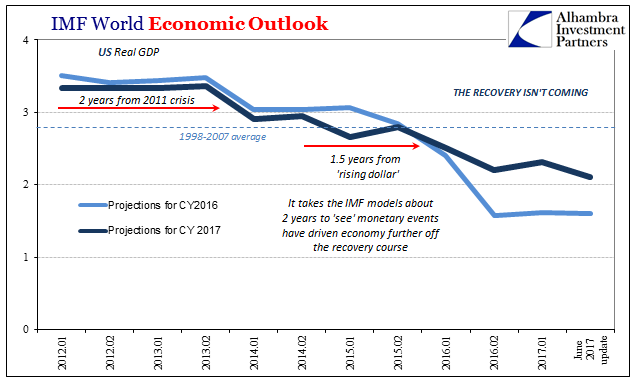 Economists, however, talk about their assessments in only these narrow terms as if the past doesn’t any longer matter; whether or not GDP might accelerate next year as opposed to this year. In some places like Europe, the ECB judges itself on the further appearance of any negative quarters rather than the speed at which the European economy should actually achieve.

Earlier today, speaking in Portugal, ECB chief Mario Draghi “shocked” markets with what seemed to be a more positive evaluation of European conditions. As ever, though, remaining weakness was “transitory.”

We can be confident that our policy is working and its full effects on inflation will gradually materialize. But for that, our policy needs to be persistent, and we need to be prudent in how we adjust its parameters to improving economic conditions.

I don’t know what transitory is in Portuguese, but “gradually materialize” is surely close enough. Yet, if we review Europe’s economy from the proper wider perspective, there is instead no basis for that claim. These aren’t “headwinds” so much as a permanent dislocation, again the combination of shrunk and slower at the same time. It is the worst case and leaves Europe in a very precarious state. 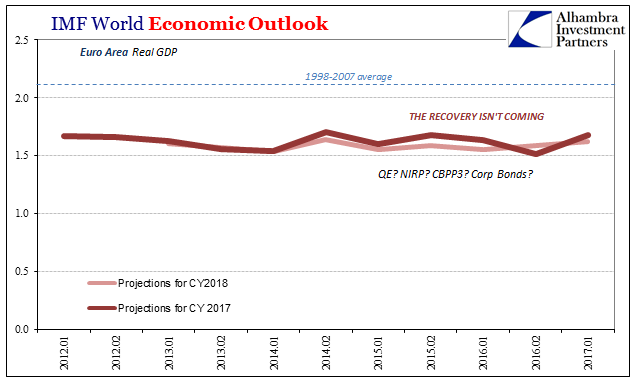 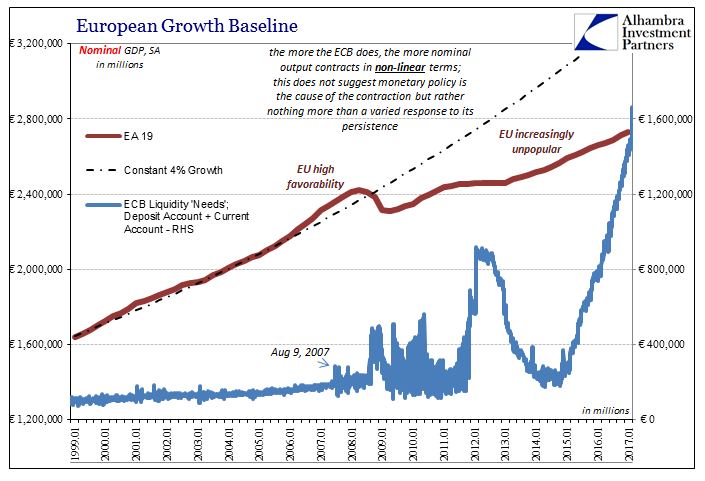 Monetary policy is always focused on the downside. Avoiding further contraction right now is not at all the same as improvement, not in any meaningful sense. For Europeans, as Americans, that’s not even a priority issue. The biggest danger facing the world is the lack of upside not the possibility of more contraction. In non-linear terms the shrinking never stopped.

The IMF’s Article IV report on Europe was written in positively glowing terms, yet they provided no update to economic estimates. They note only that the “recovery has gained momentum” even if later in it that doesn’t actually appear to be the case.

Subdued wage growth and underlying inflation suggest there is a long way to go before headline inflation durably meets the ECB’s objective. The ECB has rightly committed to keep policy rates low for an extended period, well past the horizon of net asset purchases. No changes to this forward guidance should be made until there is strong backing from the performance of actual inflation or a firm assessment that the inflation outlook has improved decisively.

So we are back at this disconnect between the way economists characterize economic circumstances and the very different condition most people find for these various and connected economic systems. The recovery in Europe has gained momentum, so says Mario Draghi and the IMF, but don’t look for any evidence for that contention. It doesn’t exist. Instead they are sure it will “gradually materialize” even though for ten years now it hasn’t despite all their same past assurances that it would.

The only thing that has ever proven to be truly transitory is these promises. And like the IMF “reflation” predictions for the US, they often disappear quickly.