The US Treasury as a result of the government’s bloated response to the Great “Recession” has been forced in notes and bonds to reopen their auctions each and every month. Before then, reopenings were less frequent. They weren’t infrequent, but the Treasury wasn’t just auctioning 10s every month.

In 2007, for example, the Department conducted four quarterly auctions and one reopening for each. On October 31, 2007, it announced its regular intention to sell $13 billion in 10-year notes on November 15. A little over a month later, on December 17, it was augmented by another $8 billion in 9-year, 11-month paper with the same CUSIP (912828 HH 6), therefore technically the same note.

The Treasury conducted the next regular auction for 10s (912820 3H 8) on August 9, selling $23 billion in notes. The first reopening was announced today at $20 billion of the same (now 9-year, 11-month maturity). This pattern of supply is no different than at auctions previous; the May sale was $23 billion in new notes, followed by $20 billion reopenings each in June and July.

And yet, the repo market for the 10s has gone insane today. GC rates for UST 10s collateral has dropped through the repo penalty floor (200 bps minus RRP). It indicates a severe shortage of 10s for collateral, which for the mainstream devolves into dreams about the Treasury market finally getting on board with interest rates have nowhere to go but up (a huge increase, supposedly, in short Treasury positions).

Without a supply issue to factor, the reopenings being perfectly consistent, there doesn’t appear any other explanation (as always) than the more benign.

Interestingly, however, the GC rate for the 10s did not just go down today on the auction announcement. The first real negative was on Monday, September 5. What was notable about UST trading on Monday was the very security we have been watching in repo all year – the 4-week bill. 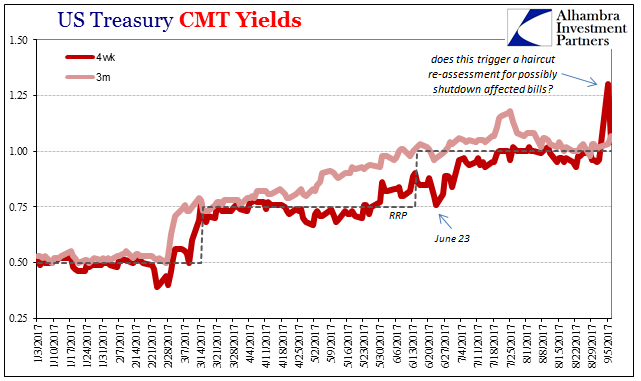 The equivalent yield on the shortest instrument skyrocketed to start this week, ostensibly because of concerns over a possible debt ceiling fiasco. Those fears may or may not be real, and in the case of repo it really doesn’t matter.

What do matter are haircuts. As a cash lender/collateral holder your only concern apart from the interest rate or spread is security of that collateral. The haircut is that security, cushioning your position against any violent move in the price of the collateral instrument. Even an overnight repo is subject occasionally to such risk (repo traders, I can assure you, do not fondly recall 2007 MBS, before then the perfect example of placid trading).

But on such short terms lower haircuts are almost always appropriate. A 3% daily move in something like a T-bill is perfectly rare, so a 3% haircut or less is perfectly reasonable. But what happens when confronted by a day like Monday?

To be perfectly honest, we don’t really know. Almost all repo is private, bilateral, and bespoke; meaning a trade between two parties where only those two parties know the terms. Thus, if the guy you were getting 3% haircuts (or better) from on 4-week bill collateral starts to demand more margin because of that one violent move, no matter how overblown or irrational, then you either have to find somebody else willing to give you the old terms or you pony up some acceptable alternate – like benchmark OTR 10s.

For much of the past year, bills appear to have retaken their place of prominence in the repo hierarchy. It was always the case before where bills were preferred above all other UST’s largely because they are almost all OTR. It’s easy stuff to use in dynamic fashion. But bills that yielded near zero and sometimes actually zero left little spread for repo costs and factors. During ZIRP, notes like benchmark 10s became more dominant here.

Now that they have moved up away from the ZLB, bills are almost surely back in the spotlight (which is why I’ve highlighted them all year). It is not too much of a leap to figure a problem in 4-week bill collateral because of haircuts or just general disdain would spill over into 10-year GC rates as a collateral shortage; not because participants are thinking inflation is coming or “rate hikes” suddenly relevant and are rushing headlong to short UST’s, but because issues in the new primary collateral vehicle would tend to affect the old primary collateral vehicle next in line. 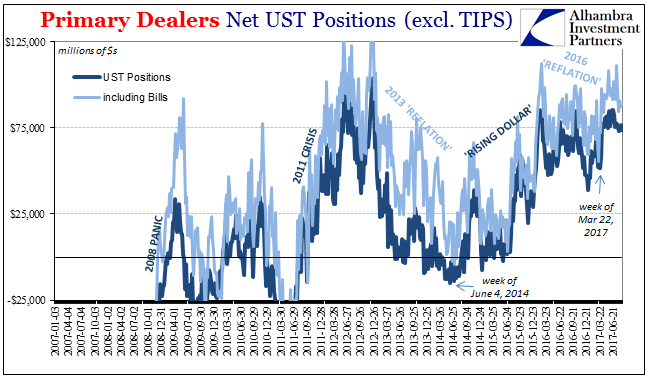 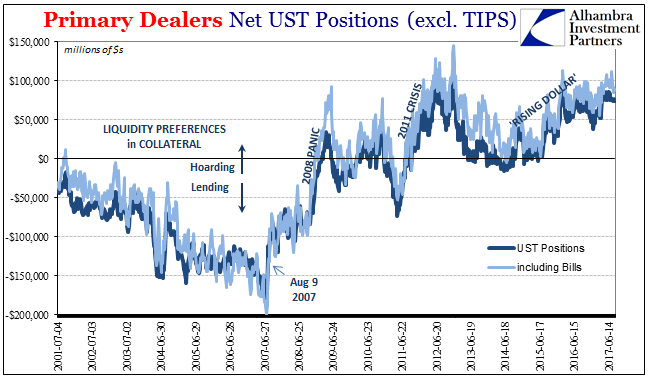 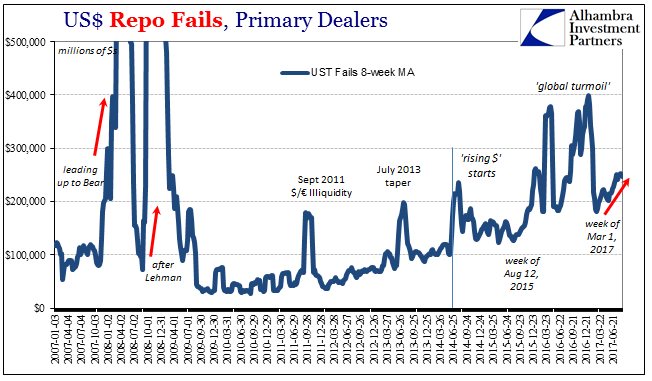 The larger issue is this collateral shortage that appears lingering beneath the surface all this time. Again, the interest rate fallacy is operative. Bond yields have been moving lower almost all year, suggesting tighter money not from monetary policy but in spite of the FOMC (think the behavior of eurodollar futures). The relationship between oil and bills seems to establish collateral swaps as one likely culprit, though, as is so often the case, there is almost surely more going on than just the one thing.

After all, we know that dealers are still holding/hoarding very high levels of UST positions, especially factoring bills. And repo fails have been consistently elevated since March (after major problems last year during the bond selloff). Collateral problems, as indicated by all of this, are like textbook “tight” money.