There is a titanic struggle going on right now in the oil market. On the one side of the futures market are the usual pace setters, the money managers. Last week, the latest COT data available, they went the most net long since March. If it continues, it will close in on the most positive futures position since the record long they established back in February.

Normally that would be insanely bullish for oil prices. But just as in February/March another part of the futures market has intervened on the other side. Back then it was the oil producers who rising inventory forced into a larger and larger offsetting net short (hedge).

This time, however, it is the swap dealers who are short for reasons that aren’t really clear. The weekly COT report for the last week in October showed a record net short for dealers, just beating their most extreme position from the middle of 2013 at -424k contracts. In the first week and November, they blew away that record at -470k. 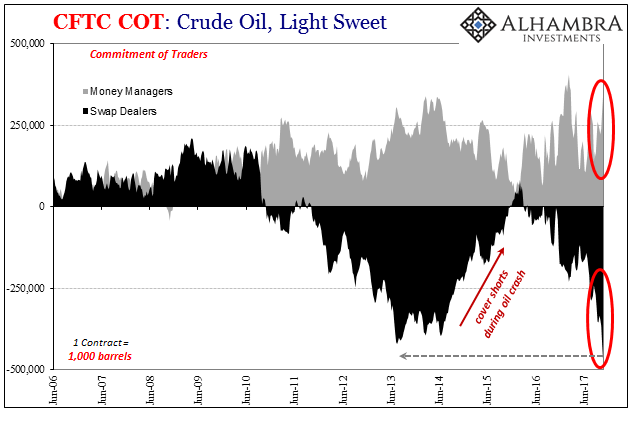 It clearly matters because in 2017 the oil market has changed. It may be the inventory story, or it may be the exit of producers from hedging that inventory and other products. Whatever the case, money managers just aren’t setting the price like they used to. And it could be that managers have changed their market activities, too, where other parts of the futures market are now cueing off (shorting) this possible difference. I honestly don’t know what it is, but I can safely point out where it is. 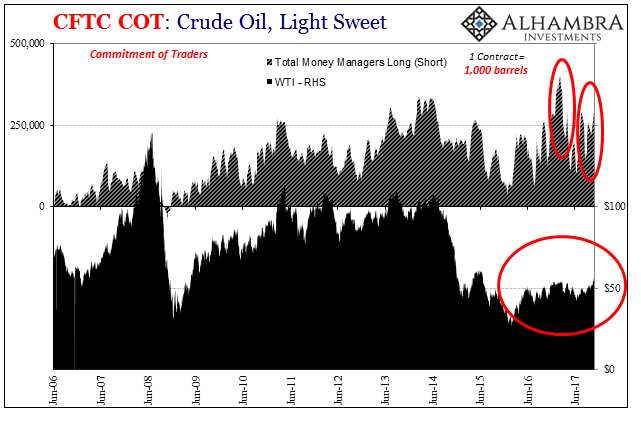 Now with swap dealers apparently showing very, very strong conviction on the short side, oil prices can’t gain any traction beyond the $57 established by in all likelihood geopolitical risk.

The fundamentals of oil continue to favor the dealers over the managers, with oil inventories remaining at the same crisis “rising dollar” levels. Being slightly better than 2016 is not a real achievement toward clearing the leftover physical imbalance, not when oil inventories are instead still consistent with late 2014. With 2017 nearly over, there should have been much more progress toward 2013 levels of stock long before now if there was ever going to be a realistic chance to balance the oil market next year (at the most optimistic).

Instead, it indicates yet again a demand problem, as in lack of materializing upside demand due to, as always, economic constraints that in the mainstream aren’t ever considered real (like when the oil crash was called repeatedly a “supply glut”). Pushing the expected rebalancing date into 2019 or even (more realistically) 2020 creates greater downside not upside risks. 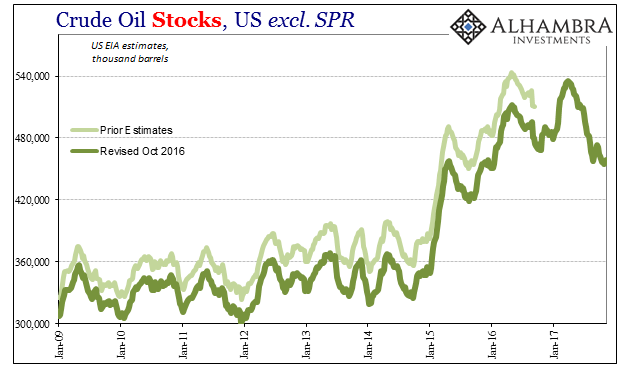 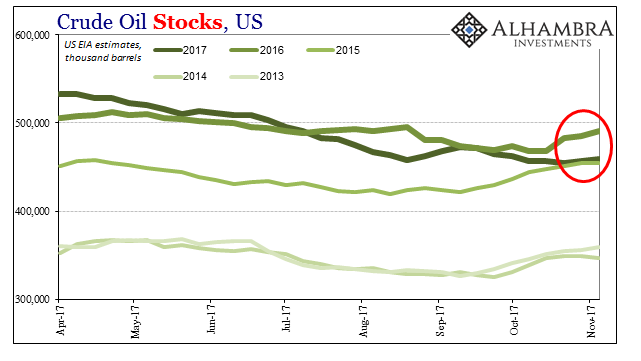 That may be why dealers have jumped all over the shorts; if it is geopolitical risks driving oil prices higher, and maybe what managers are betting on now, then if or when they fade the negative fundamentals of oil will be re-imposed on the price. That seems to be what the futures curve is saying, too. 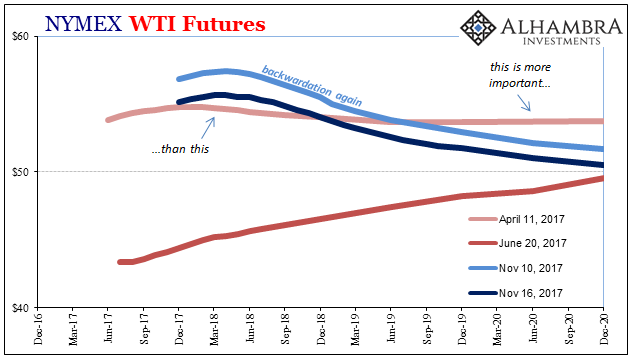 Backwardation indicates expected balance, but at a very low price rather than a rebounding one. In the latest oil pullback since last week, the curve has moved lower in unison, with the same almost identical indicated backwardation rather than toward any serious rewind toward contango.

One additional factor to consider is those record and near-record opposite futures positions. What happens if the oil price starts to move in either direction? There may need to be a whole lot of covering by whichever side ends up on the losing end, perhaps turbocharging the price as it begins to move whatever way it decides to go.

There is right now a lot at stake in the crude market, and it’s not just about oil.