China’s National Bureau of Statistics reported last week that the official manufacturing PMI for that country rose from 51.6 in October to 51.8 in November. Since “analysts” were expecting 51.4 (Reuters poll of Economists) it was taken as a positive sign. The same was largely true for the official non-manufacturing PMI, rising like its counterpart here from 54.3 the month prior to 54.8 last month.

None of these results, however, are meaningfully different from each other. Rather than indicate any improvement, they actually suggest quite the opposite. According to the PMI’s, China’s economy isn’t falling off but it isn’t accelerating, either. The latter is what really matters, and here in the sentiment data marks the best case for the Chinese. 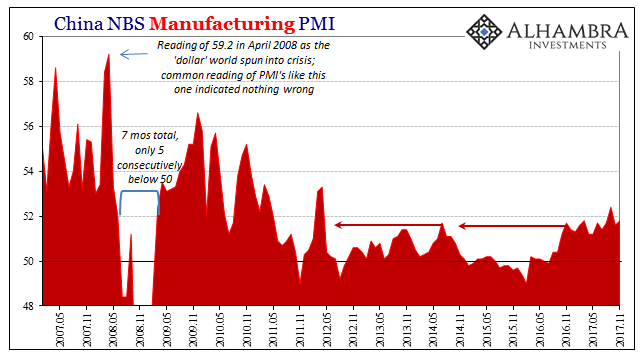 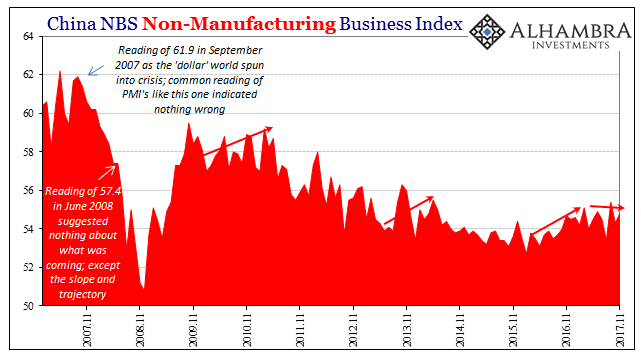 On the manufacturing side, the headline index is supported almost entirely by the reported experience of China’s biggest firms (many state-owned of one variety or another). The PMI for this size category has been consistently above the overall index, though importantly remaining almost at the same level going back to the latter half of last year.

Small Chinese manufacturers, on the other hand, answer to the NBS with a very different set of perceptions. While there has been an uptick in the PMI for small firms, the index has remained below 50 in each of the last five months and outside just two months in the middle of 2017 has continued in that low state for years. While that doesn’t necessarily mean activity is contracting as is the conventional interpretation surrounding PMI’s at or below 50, what it does suggest is again the clear lack of acceleration especially in the private economy outside government-driven activity and influence.

Middle-sized firms according to the manufacturing PMI fall closer to those of small size rather than those larger. 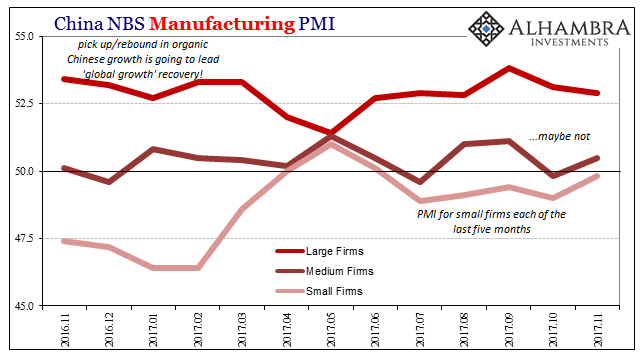 It suggests that organic growth hasn’t materialized as was expected to follow from 2016’s burst of “stimulus.” That’s a problem, of course, for a lot of related expectations around the world. It was widely anticipated that China was going to lead the global economy out of the 2015-16 doldrums, erasing that global downturn with substantial acceleration benefiting pretty much every beaten up corner of the world.

“Reflation” #3 was based in large part on that expectation. That it appears to be coming up way short, even in the best case PMI view, is another nod in the direction of global bond markets still obviously immune to the mainstream interpretation about what’s really going on. 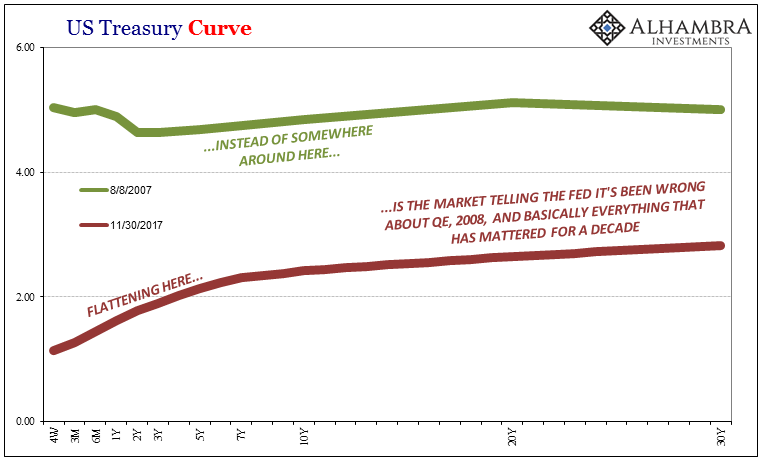 The stock market by contrast was surely counting on it, among other things, to help bridge the chasm between stock prices and earnings. It increasingly appears to be, however, simply the last rationalization for why stock prices are going up without anything having changed in the real economy in the meantime. It’s always for stocks like Economists about what is going to happen, even when the last “going to happen” never does (five years and counting since the precipitous 2012 slowdown). 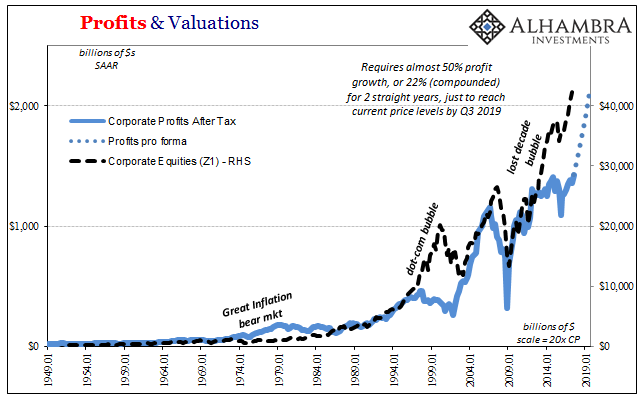 First it was QE3 that was going to do it, only it came up far short, the opposite in fact, developing into a downturn that wasn’t accounted for in shares except during the two liquidation events tied to the reason for it all in the first place (“dollar”). Without a sustained China recovery, a real one rather than what’s imagined, the mainstream has more and more turned elsewhere for the next rationalization in the series.

If QE didn’t work, and China didn’t pull through, then surely tax cuts will alter the stubborn decade-long economic malaise/depression? That’s essentially what that market is saying in its latest price surge over the past few weeks.

The bond market, on the other hand, has totally ignored the tax bill as it works its way through the government. That’s a remarkable change from this time last year (and even earlier this year whenever rumors of a tax bill would trigger the latest BOND ROUT!!!) when everything Trump including the promise of tax reform was taken under “reflation.” For it now to complete discount it now so close to where it becomes a very real perhaps imminent possibility suggests beyond jaded perceptions about a great deal more than US taxes. 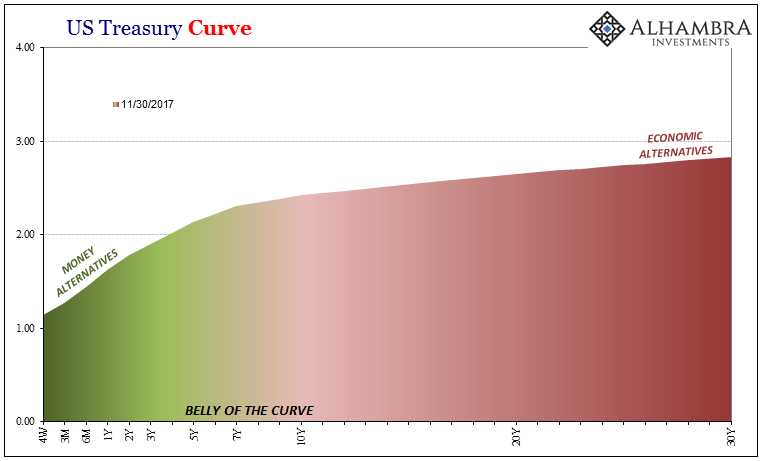 Again, the yield curve flattening is instructive in this regard. The long end is saying that no matter what happens in the short run, including the “exciting” possibility of tax cuts, it will not be enough to alter the atrocious economic baseline. Maybe that’s a rationalization of its own, but unlike the stock market that surges on every possibility (and then simply forgets the last rationalization failing for the next rationalization that surely won’t) the bond market appears to have changed its mind on at least this one, with, it seems, very good reason. That’s an important signal, and one actually consistent with China and “global growth” perceptions as they likely are.