Chart of the Week: …ummmm

Chart of the Week: …ummmm

Back in early October, I noted that repo fails had jumped above $250 billion (combined “to receive” and “to deliver”) for three weeks straight. That wasn’t an auspicious result, as sustained collateral problems like that don’t correlate to happy things. It all began the week of September 5, in what seemed like a minor one-day nuisance over the 4-week bill yield.

October was something of lull in repo and other things, too. Nothing ever goes in a straight line, of course, so it wasn’t surprising to find by mid-November a resumption of concerns based so much in repo. The week of Thanksgiving, fails totaled again more than $400 billion, similar in scale to that week of September 5. Then they spiked by 50% more to $600 billion the week after.

FRBNY records $523 billion in repo fails now for the first week of December. That’s three straight more than $400 billion, two in a row better than half a trillion. The 8-week average is even just shy of $350 billion. You can get rich being a collateral owner under these terms, raising the question where are they all? 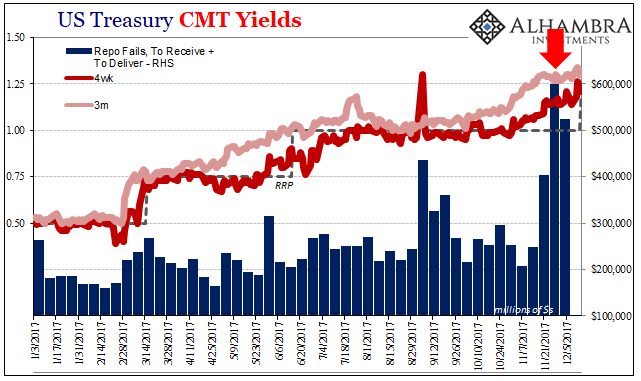 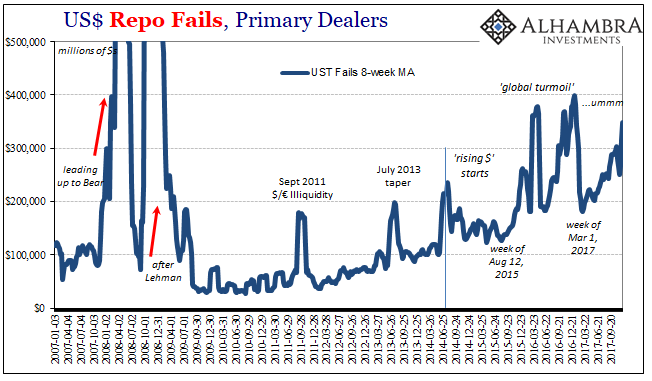 While these are good charts, important charts, neither is our Chart of the Week. What we are looking for in this context of really another burgeoning “dollar shortage” episode is, as always, escalation.

I’m going to go out on a limb and claim there is something seriously wrong in repo. All jokes aside, I know it sounds like a broken record but the dimension that matters is not intermittent collateral problems so much as the greater intensity to them and in a condensing timeframe. Escalation is a description you really don’t want to fit the circumstances.

Just as raging wildfires have a horrific tendency to jump fire-lines and even whole valleys given enough energy, funding issues can jump markets. The global “dollar” market is not a monolithic whole and never has been. It may be (very likely is) more fragmented today than at any point in the past owing to persistent balance sheet capacity problems (therefore the breakdown of covered interest parity that used to keep various funding markets working together in what sure seemed like a seamless whole). It would be a clear point of magnification, then, to find serious problems in one part of the eurodollar system spilling over into another one.

Leading us to our Chart of the Week: 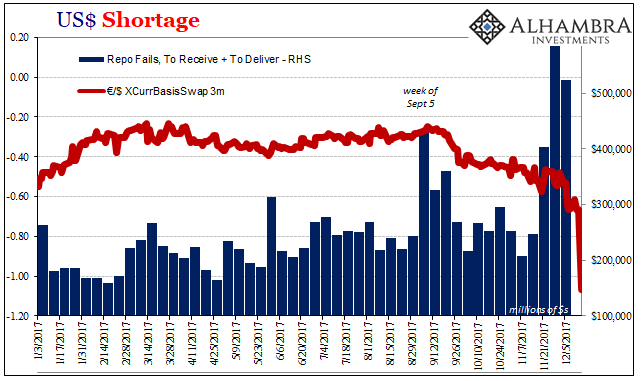 The 3-month €/$ cross currency basis swap has plunged this week, a descent that really started the week after Thanksgiving. It has reached a level today last seen during the 2011 crisis. And this latest detour clearly marks its inflection where else but the week of September 5. In other words, you rarely find an exact match like the one we have here repo to €/$ swaps.

This particular instrument isn’t alone among XCurrBasisSwaps, either, it is merely the tenor and counterpart currency that right now is at the most extreme.

Because these are two very different funding mechanisms, repo and FX (Footnote dollars), there can be little doubt what is really at issue – “dollar” shortage as a matter of supply and therefore balance sheet capacity. That’s the one common element linking collateral flow with the severe unwillingness (broken covered interest parity) to make a killing lending FX dollars to euro counterparties.

This doesn’t mean there is a crash right ahead. It does, however, suggest coming difficulties in various markets and more than that the global economy. You can blame regulations all you want, as the mainstream has already rushed to do, being forced by such a huge move in €/$ cross to at least report on it, but there is no way this comes out as anything other than an escalating warning.

As a reminder, what negative premiums on XCurrBasisSwaps mean:

The cross currency basis swap is somewhat unique in that by fixing exchange values at both the outset and back end, it reveals purely financial perceptions in its values and changing values about the differences in interest payments. For example, in the 1990’s the basis swap for Japanese banks (again, not companies) was structurally negative, meaning that they had to pay a premium to swap into dollar funding because of negative perceptions of creditworthiness. This is the legacy of the downside of the “global dollar short”, as Japanese banks had accumulated large dollar asset positions (long US$ assets, short US$ funding) leaving them susceptible to such vagaries in dollar funding, whether repo or basis swaps or anything else someone on Wall Street or in London might dream up that wasn’t gold or actual cash…

The negative yen basis swap acts like leverage where even yields on the interim “investment” are negative. Any speculator or bank with spare “dollars” could lend them in a yen basis swap meaning an exchange into yen. Because you end up with yen you are forced into some really bad investment choices such as slightly negative 5-year government bonds, but that is just part of the cost of keeping risk on your yen side low. Instead, the real money is made in the basis swap itself since it now trades so highly negative. The very fact of that basis swap spread means a huge premium on spare dollars; which is another way of saying there is a “dollar” shortage. Because of the shortage and its premium, you can swap into yen and invest in negative yielding JGB’s in size and still make out handsomely. There has been, in fact, a rush of foreign “money” into Japan to take advantage of this dollar shortage; the fact that there has been such enthusiasm and it still has not alleviated the imbalance proves scale and intractability. 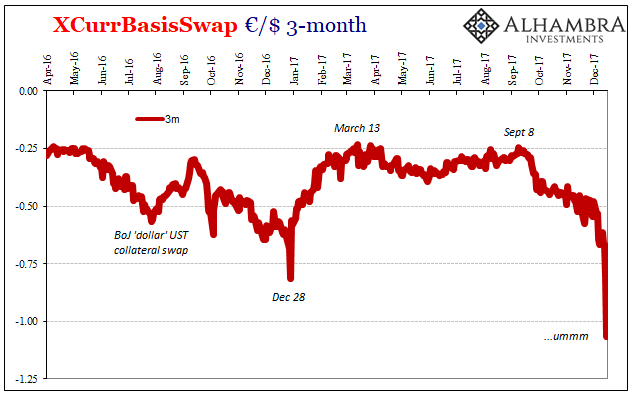