The last few days have created a market environment where the repo counterparties’ margin prices for our AAA-rated U.S. government agency floating-rate capped securities issued by Fannie Mae and Freddie Mac are not representative of the underlying recoverable value of these securities.

Translation: CCC used AAA-rated super senior MBS in its mammoth $21.7 billion portfolio to fund those very same assets as collateral in the repo market. Haircuts were increased even on those MBS pieces having nothing whatsoever to do with subprime, nor were they unprotected (thickness) in each structure, which meant CCC would have to post additional collateral it did not have. Selling the assets was out of the question given the behavior of prices surrounding them.

One of the most mystifying parts of the story was that this particular investment vehicle was put together in July of 2007. Heavily leveraged from the very start, it’s short history reads almost as a paradox. In other words, it failed not even a year into its existence, raising significant questions about what Carlyle was thinking.

In truth, it’s managers had no illusions about the looming crisis. In July 2007, they were to some degree betting on it. That’s the thing about the 2007-09 monetary panic; even those who were expecting it to get bad were surprised at just how bad, and where those problems hit the hardest. They were thinking illiquidity, just not total illiquidity.

The investment thesis was simple enough; as subprime MBS became more untouchable by a broader subset of Wall Street (really Lombard Street), those firms would increasingly demand solid assets. Liquidity pressures particularly in the repo market would lead many to ditch the “toxic waste” in favor of the pristine GSE-guaranteed MBS CCC had bought in bulk. Spreads were always thin, so even as they were expected to fatten in CCC’s favor it still required enormous leverage and size to capture them in any worthwhile fashion.

Nobody, it seemed, had accounted for the correlation smile. This quirk of pricing statistics meant that under certain conditions the valuation (correlation) of the senior and super senior tranches would act more like the riskiest parts of the structure, less and less like the safest. In short, “pristine” GSE paper became just as “toxic” as so many mezzanine subprimes feeding front page stories. It was a CDS problem (CDS were used to price illiquid MBS, especially correlation quotes), and therefore the whole systemic (and geographic) impairment of balance sheet capacity.

That’s what made early March 2008 so devastating in systemic fashion. What those in the shadows had discerned was just how thin the monetary structure of the “dollar” world really was (monetary policy included). Conventional wisdom died in those few days between Carlyle and Bear; suddenly everything was up for re-evaluation. 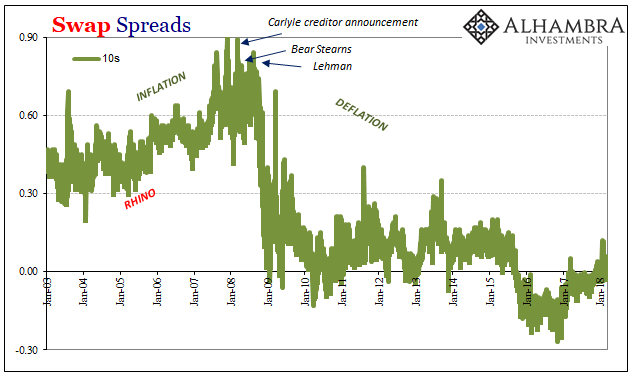 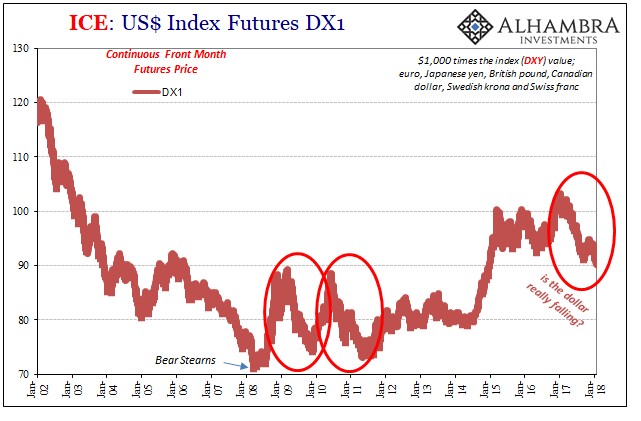 That is what is so fascinating, to put it kindly, about this whole inflation/boom hysteria of 2017-18. Proponents of the theory are not just suggesting, as markets do, that the balance of probabilities has shifted slightly. They are not saying that after some really dark times in 2015 and 2016 the market has come off the floor to slightly more optimistic future scenarios.

The problem with such an idea is that it just doesn’t appear anywhere. Markets have been trading on mild “reflation” sentiment, that’s it. And there really isn’t much conviction behind it, either. 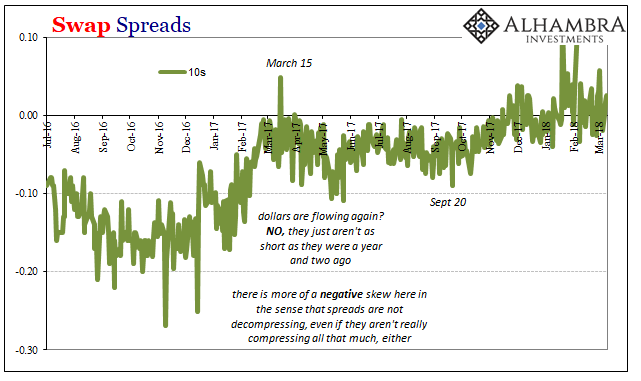 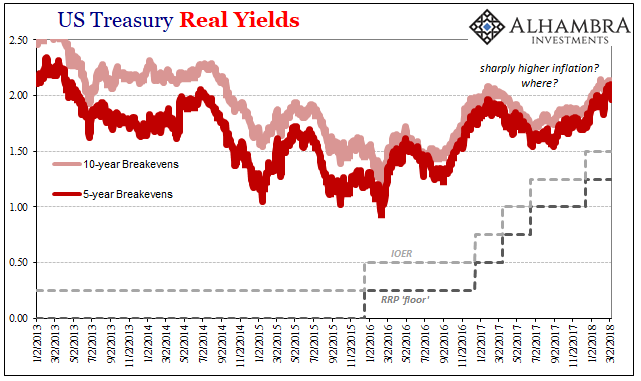 You look at factors like swap spreads or inflation breakevens and they are up, but they aren’t really UP. They are only when compared, again, to the prior few years that were trading more like another 2008 was looming (which it was for much of the overseas “dollar” world). It’s an incredibly low standard for comparison, and it does nothing to advance this reversion paradigm shift toward inflation.

It is, instead, a whole lot of smoke and mirrors. The 10s still haven’t yet hit 3% like they did in 2013. There’s a bit of desperation on that side almost as if especially in the media many are cheerleading for it (because they are; shared technocratic goals).

The BOND ROUT!!! phenomenon of this “reflation” trend in particular is a symptom of time. March 2008 was a very long time ago, and the technocrats have been repeatedly predicting its mirror positive image almost every year since. Having surpassed a decade now, there is religious fervor about it. It doesn’t matter how much the yield curve collapses on the narrative (the long end, even as it rises somewhat in nominal terms, continues its stubborn and obvious resistance against the idea), the BOND ROUT!!! like actual inflation is certain for tomorrow. 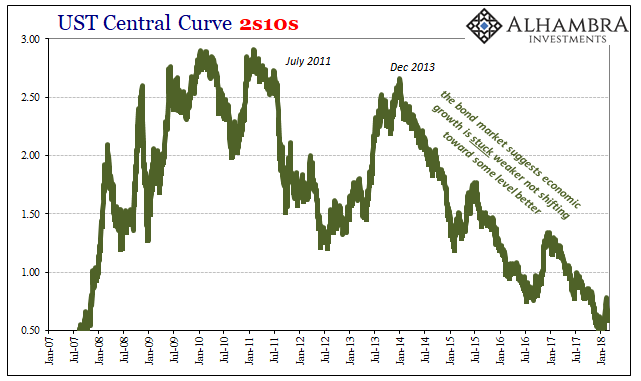 To convince anyone of that, there has been a regular diet of scary sounding stories. One published just today also reaches far back into the past – further back, even, than 2008. Under the predictably overwrought title, Bond Market’s Feared Traders Threaten Treasuries Once Again, Bloomberg (where else?) actually digs up Craig Coats from retirement.

“Some of the stirrings from what we used to know about the old days of inflation are really starting to rear their head,” Coats, now retired, said from Florida. Back then “people paid a lot more attention to the deficits and the cost from the standpoint of what it was to the Treasury. Not so much now, but I think those days are going to be coming back.”

During a week of heavy UST issuance, which the treasury market today easily absorbed, the term “bond vigilantes” is the latest addition to the narrative. Apparently the “obviousness” of the looming inflation threat wasn’t enough. Coats is an interesting choice, however, given his prominence is derived from a huge mistake. During the Crash of ’87, running for Salomon Brothers its UST desk, Coats bet that the stock crash was going to plunge the economy into 1930’s darkness.

Betting the other way were the baby Wall Street quants, John Merriweather’s math-heavy academics. They unlike Coats would be proven correct that day, only to take their regressions with Merriweather to LTCM to fail even more spectacularly eleven years later.

Alan Greenspan worried in 1987 as Coats did, and because of that he was given credit he hadn’t earned for supposedly limiting any stock market fallout (claim that things could get really bad, and then when they don’t ascribe the fact that they didn’t to whatever you did). Then he stood ignorant as LTCM ravaged Asia, and was given credit that it wasn’t worse there or here (“jobs saved”). Finally, his protégé Ben Bernanke first said subprime was contained before admitting in December 2008:

I and others were mistaken early on in saying that the subprime crisis would be contained. The causal relationship between the housing problem and the broad financial system was very complex and difficult to predict.

In truth, it wasn’t. What made it difficult in 1987, 1997, and 2007 was the eurodollar. Behind all those was an entire offshore monetary ecosystem neither policymakers nor those inside Wall Street cared much to investigate; stocks crashed in 1987 but the economy didn’t because the eurodollar system cushioned the latter, as it would for the US and Europe during the Asian flu and again during the dot-com bust; when the eurodollar system finally flipped out during those few days in March 2008, that’s when the nightmare finally came true and there was nobody there who had any idea what was really going on.

Has it really changed in the ten years since Carlyle and Bear? The 2014-16 “rising dollar” and the “unexpected” consequences of it proposes an emphatic “no.” That simply means the latest inflation craze is based importantly on both overhyping “reflation” at the same time counting on random good fortune; something has to go right at some point after ten years of nothing having done so.

In my view, it’s perfectly clear today that to believe the paradigm is changing is to do so from the same blind position of monetary illiteracy. That’s why it’s been to this point nothing but hype.

Craig Coats? That’s some thin hysteria, even for this BOND ROUT!!!! An actual reverse of March 2008 just wouldn’t need it.