Hong Kong, China, And The Nightmare of Forex Piles

Hong Kong, China, And The Nightmare of Forex Piles

Very early on in the turn, I mean very early, you could already tell there were substantial problems underneath. By the time CNY started lower, against all expectations, there had already been serious signs of trouble in China for months by then. In that initial seemingly minor drop in early 2014, the PBOC’s actions belied a stable system. If you knew what to look for, you could see a central bank struggling very hard to maintain order rather than the capable and accomplished technocratic institution as it was always described (and somehow still is). 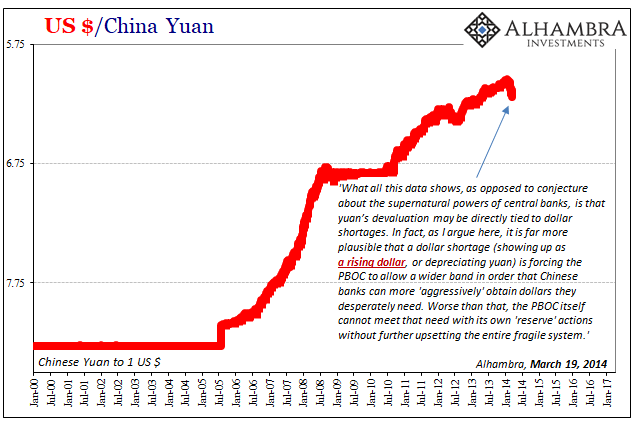 Chinese officials would go through several additional programs throughout the rest of 2014 (I won’t list them here) to try to rescue first their monetary paradigm and second their economy thereafter. Obviously, this flew directly in the face of conventional wisdom which holds that the amount of “reserves” on hand act as insurance against just this sort of thing. The larger the pile of them, as China held the largest in the world, then the more of a guarantee.

It’s a difficult concept to grasp because the way that convention is written seems perfectly logical and intuitive. But that’s not how these things go. The more “reserves” you have it instead suggests just how much of a potentially massive problem you could run into beyond your grasp, not an unassailable solution. 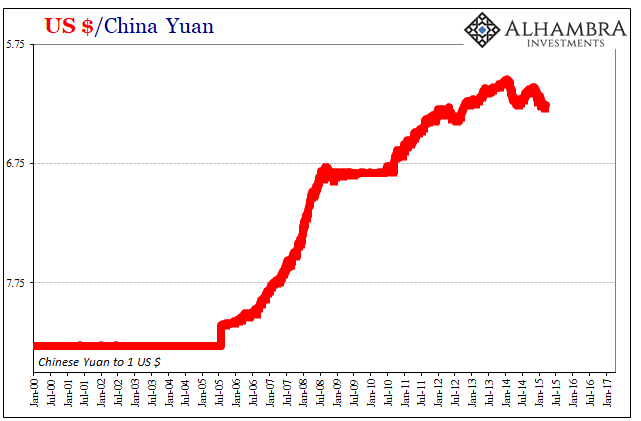 About a year after I wrote that initial assessment, by March 2015 CNY hadn’t really progressed all that much farther downward. It didn’t at least on that basis appear as if things could get so far out of hand. Still, there were only growing signs of the same big negatives. In what sure seems in hindsight a last-ditch effort, from that point forward for a length of almost 5 months the PBOC enforced a shadow peg or at least a narrowed band on the currency. 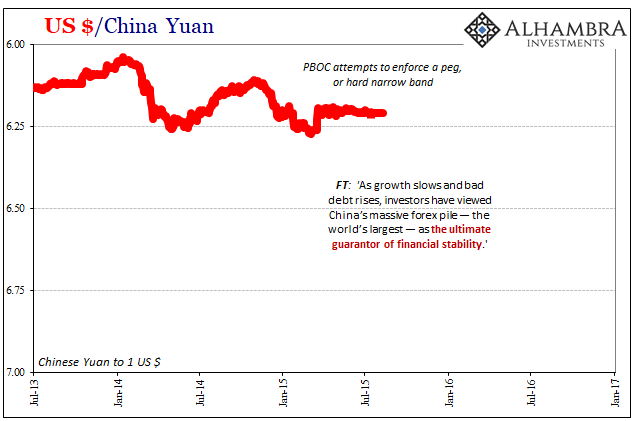 To do so meant it was the central bank (or others acting on its behalf in official capacities) supplying “dollars” into the marketplace where Chinese banks were having so much trouble obtaining them. Despite having the largest holdings of forex assets, predominantly “dollar” denominated, the world has ever known, and may ever know for that matter, the PBOC was broken anyway. 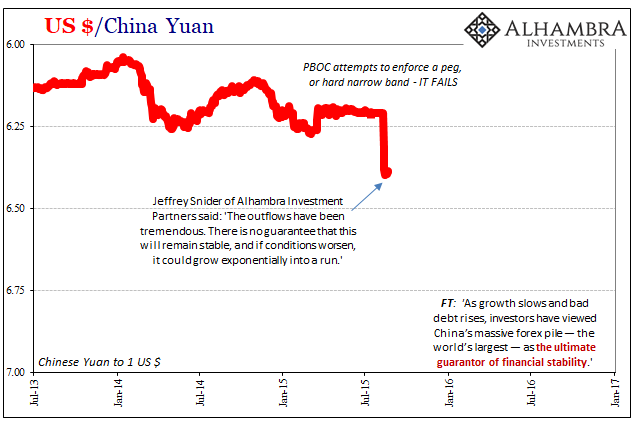 Again, the size of your reserves reflects, and is proportional to, your potential need for funding. You can’t accumulate that many unless you have a similarly arrayed “dollar short.” The bigger the stockpile the more potential for it to get out of hand if things go the wrong way (usually on the self-reinforcing cycle of rising risk perceptions feeding volatility, or what we might call in different times and situations a “run”). 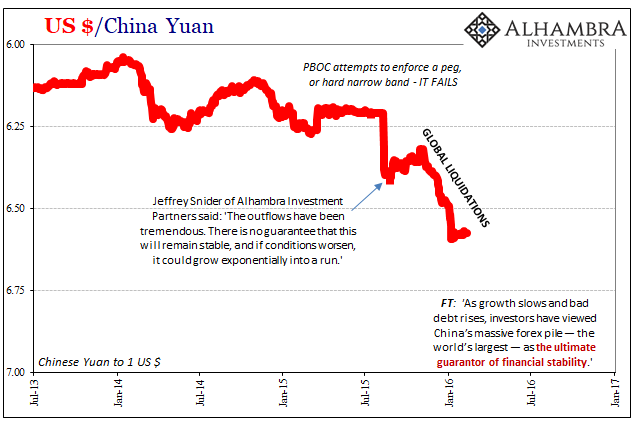 So, despite what should have been by orthodox conception a full and complete guarantee it became the nightmare scenario. The more Chinese officials tried to get out of it, the worse it seemed to get. CNY would keep falling all the way until the end of 2016, along the way not really creating a global crisis so much as suggesting where that “dollar run” was wreaking the most havoc. After clinging often desperately to orthodox conventions, by the time it reached its worst even those across the mainstream media finally caught on that CNY DOWN = BAD. 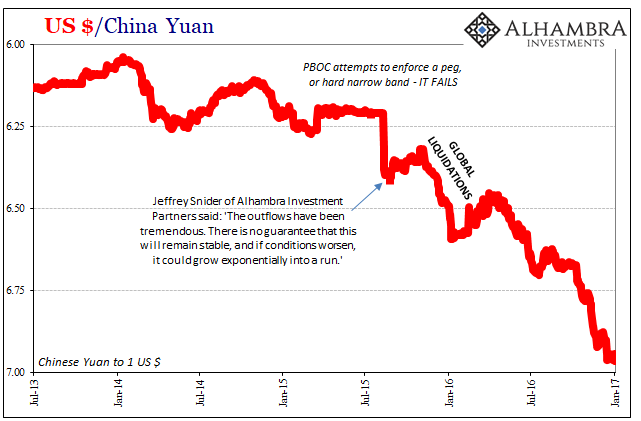 With that in mind, we turn now to HKD. The Hong Kong Monetary Authority (HKMA) tells us to stay calm largely because, surprise, they have an enormous stockpile of foreign reserves. They will be able to, they claim, defend the currency band’s lower limit (by supplying dollars) which has now been reached until Kingdom Come.

The mainland’s experience with CNY in those five months of 2015 might be instructive in that regard. The PBOC essentially attempted exactly what HKMA will starting this week (at least officially; unofficially I believe they’ve been in the market for several weeks already). It’s practically the same process carried out by the same means (even if the transactions and types of transactions might be dissimilar in important ways).

In the end, the amount of reserves tells us very little about what monetary authorities can do, but a whole lot more about what they might have to should the self-reinforcing cycle come on. With HKD having been declining for over a year by this point, at what stage within that cycle has Hong Kong possibly reached already?

For that matter, where does it all fit in the global “dollar” events of the past six or nine months (those where “reflation” despite the inflation hysteria has relented)? In reviewing January’s liquidations, we can’t help but notice the only other time the US 4-week T-bill experienced a similarly sized bad day like that of January 30 was on September 5 last year. Early September, of course, and that particular week registered all across the “dollar” spectrum – including for both HKD and CNY. 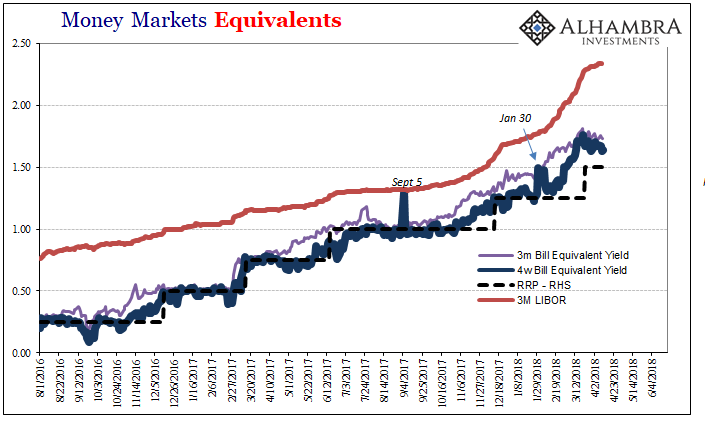 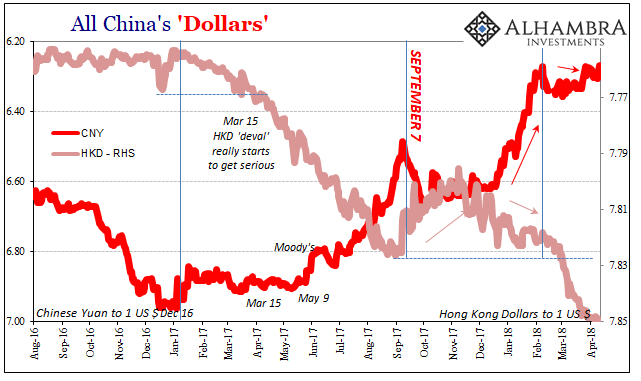 It’s also hard not to notice that CNY abruptly terminated its last big rise, the second since last summer, on February 7 repeating the pattern again – the day after the second liquidation in T-bills (and two days after the big one in global stocks, including China’s) and where LIBOR really started to take off (but that was mere auction supply, just ask the FOMC). 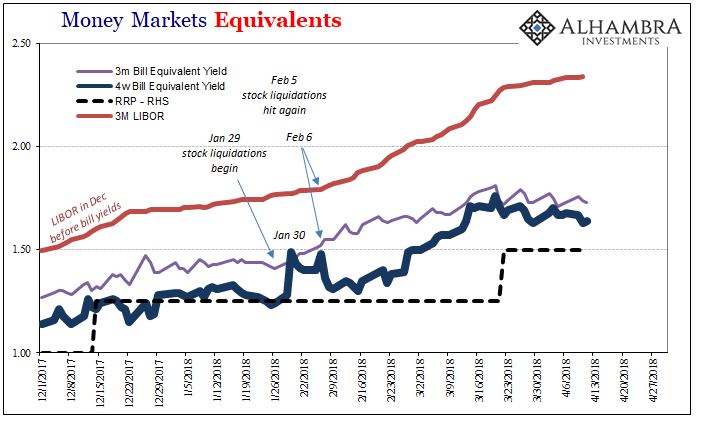 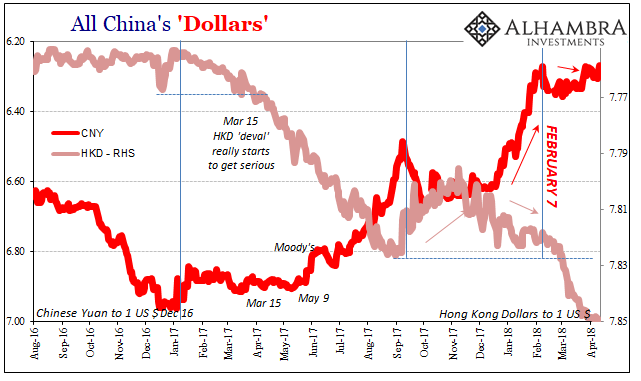 It’s the reason yesterday I brought up the question of who holds the largest stockpile of Treasury bills on the planet – Beijing. If someone has been forced to liquidate bills, of all things, both in early September and then again in January/February, we can at least see the clear connections to the “dollar” system and some very specific points within it.

It doesn’t bode well for HKMA’s “stay calm” policy prescriptions. The risks are not in any way in their favor. Nor ours, I might add. Things could still change for the positive, of course, but foreign reserves would have nothing to do with it.