Stupid’s On The Other Foot Now

Stupid’s On The Other Foot Now

We’ve noted over the past few weeks just how much things have changed since earlier this year. We started off 2018 in the grips of inflation hysteria, the more extreme corollary to globally synchronized growth. Things were going to be so good, they said, it would be bad. Now there’s just growing worries about only bad.

In some cases, these things have an even shorter shelf life. A week ago last Thursday, Brazil’s central bank confidently exhorted its entry into the bad part. The real has been collapsing since mid-April on a pace worse than in 2013 and almost equal to the big drop late 2014. They are in trouble.

Given all that, there are numerous parts of this just-published Bloomberg article that really stick out (and that’s saying something). There are at least three things about it that demand attention.

Brazil’s central bank cannot sustain its current campaign to combat currency volatility until general elections in October, according to a central bank official familiar with the board’s thinking.

If that’s true, it completely contradicts what was said on June 7 – not that that is in any way shocking or even unexpected. It seems most likely this “central banker familiar with the board’s thinking” is either a staff member with Banco or possibly one at a foreign counterparty central bank who has commiserated this weekend with Brazil’s desperation.

In the above quoted article we learn just how desperate. The second:

Brazil’s central bank, led by its President Ilan Goldfajn, has offered $26 billion dollars worth of foreign-exchange swaps in just over a week in an effort to reduce the currency’s volatility.

Yeah, no wonder they are walking everything back. How can you possible blow through $26 billion in a week and accomplish next to nothing? BRL isn’t exactly reversing itself in the face of such determined policy action. It had fallen below 3.90 to the dollar prompting the official reaction. But nearly $30 billion later and the currency is sticking around 3.72 – 3.73? That’s not efficient use of scarce resources; it’s instead like a troubled bank running to the Discount Window because it has no other alternative. 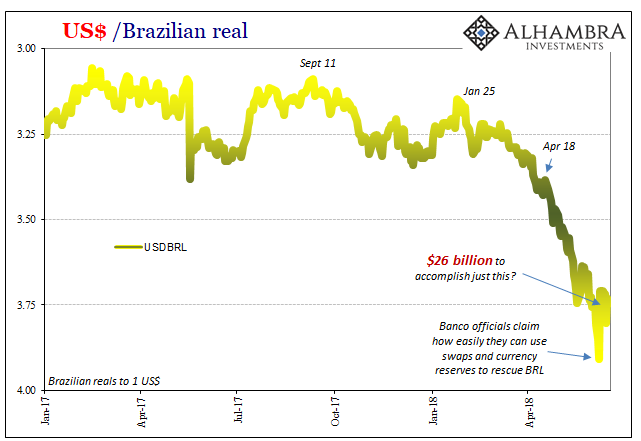 While shocking enough, my vote for what stands out most goes to this:

“Resorting to FX intervention via reserves is a rather extreme move, given the long and successful use of swaps,” said Alvise Marino a foreign-exchange strategist at Credit Suisse in New York. [emphasis added]

Again, the mainstream strategists and Economists have no memory. It’s the other way around; they tried swaps last time, in 2013 and 2014, to disastrous results. This, to me, is the big news here (not that the expert quoted in the article got it wrong, but what they got wrong). The way Banco is going about its renewed “dollar” problem is entirely different from the way the central bank attacked it last time. 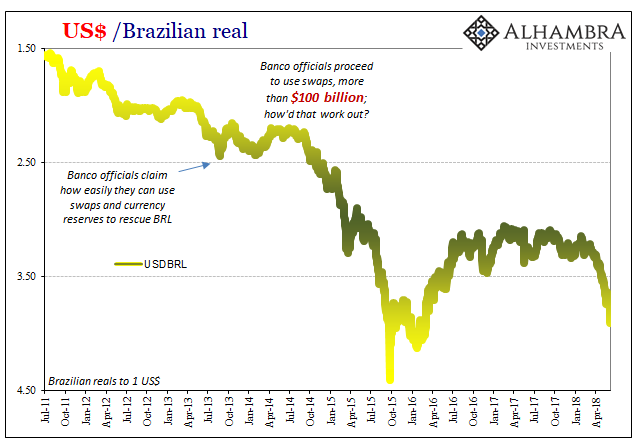 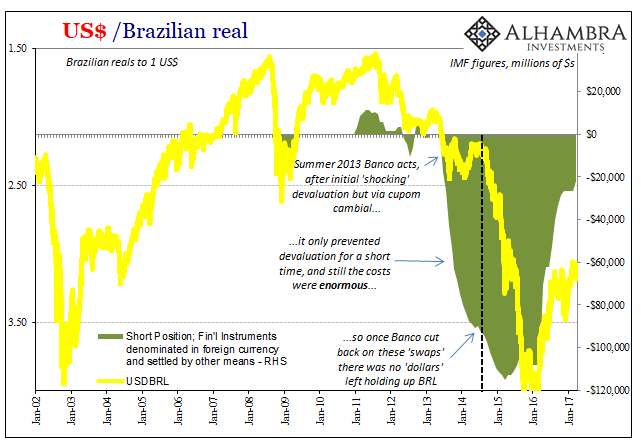 That’s a big deal because it says, it shows just how much trouble Brazil is in. The backdoor swaps they used four and five years ago were meant to avoid having to activate and mobilize reserves. They went straight to the reserves this time. This is no trivial distinction.

And it hasn’t worked, obviously, further proposing they really don’t know what they are doing. It gets back to what I wrote earlier today about Japan’s economy and its inflation variable, all of which applies equally here:

A good many market and economic agents still base what they do on the idea that central bankers largely know what they are doing, even if they make mistakes. But if you as a market participant thought that in 2016 and 2017, and therefore bought into globally synchronized growth because they said it was coming, you might react harshly if (when) it is revealed they had no idea why things may have improved at that time.

Not only that, you might further worry yourself over the prospect that if they didn’t know why things picked up back then, it stands to reason they probably won’t know if and how things might change again for the worse – like in 2014. If central bankers can’t really account for the upward shift, then what might that propose about downside risks?

And if they start to blame Amazon, well, that’s just about the time to pull “dollars” out of Argentina, maybe even India.

Which brings us to a separate if related item:

A falling tide lowers all boats, it seems. Amid an exodus from emerging markets, investors are pulling out of even Asian economies with solid prospects for growth and debt financing.

Overseas funds are pulling out of six major Asian emerging equity markets at a pace unseen since the global financial crisis of 2008 — withdrawing $19 billion from India, Indonesia, the Philippines, South Korea, Taiwan and Thailand so far this year, according to data compiled by Bloomberg.

Ever since T-bills and repo in early September I’ve been writing about escalation. In truth, though, it’s really just repeating history. No one was paying attention the last time, or the time before that, or the time before that. Well, not quite no one. Banco apparently was paying attention, not that they would ever say so publicly; thus “a central bank official familiar with the Board’s thinking.” It matters what they do, never what they say.