Yields Falling, Who Could Be Buying Without QE’s?

Yields Falling, Who Could Be Buying Without QE’s?

In the US Treasury market, the situation has been a little different. The BOND ROUT!!! theory posits that without the Fed to buy up additional supply, yields as a technical factor have to rise putting more upward pressure on rates than already exists from a booming economy. Add to that foreign selling in 2018, it left many expecting an epic selloff. Any day now.

The common battle cry was “who is left to buy up all these UST’s?” The answer, as always, is the banks themselves.

The ECB’s end to QE hasn’t sparked the same worries. A lot of it has to do with similar misperceptions about how bonds work, only in Europe particularly Germany the magnitude is checked. Europe’s central bank went further and ate up a huge chunk of government bond supply during its LSAP run.

That left a smaller float for the private markets, therefore more margin for bond demand even as the ECB exits the auctions. Still, yields were supposed to rise across Europe even Germany if not to the same extent as what was figured for the US BOND ROUT!!!

While the ending of QE will put some upward pressure on yields, low supply from Germany’s robust economy is likely to act as a counterweight, keeping that risk in check.

“For some time now, we have observed a big disconnection between real Bund yields and real economic activity,” said Chiara Cremonesi, a fixed-income strategist at UniCredit. “The scarcity of German paper — and of safe eurozone government paper in general — triggered by QE will remain a key driver of Bund performance next year, and in our view will slow down the increase in real Bund yields towards positive territory.”

As usual, that’s not what happened up to and including the robust Germany part. The ECB will begin 2019 without any QE but things in Europe are not consistent with how it was supposed to go at its end. At least the mainstream gets that part right, meaning if QE had worked (anywhere) economies would actually be booming and yields would be uniformly upward if to varying degrees.

Instead, yields are falling pretty much everywhere – the mysterious, confounding “strong worldwide demand for safe assets” has returned with a vengeance. There’s supposed to be nobody left to buy up these things, and yet “someone” remains out there in the markets with a voracious appetite for the most liquid assets. Might be a clue or something. 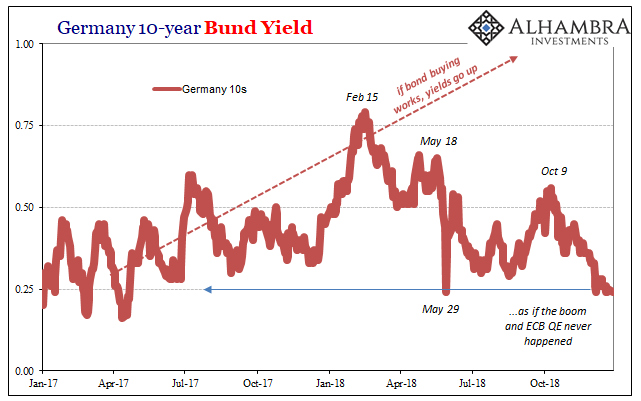 In Germany, bund yields have dropped back to levels not seen since early 2017, before Reflation #3 really tricked people into overplaying QE. They never really got all that far before “something” kicked the trend into reverse very early on this year.

This is a global trend, not surprising because it’s always a global trend. In Japan, the yield for the JGB 10s just today dropped below zero for the first time since last September. All the talk of the Bank of Japan’s QQE suddenly becoming miraculously effective after half of decade of inefficacy proved once again premature at best.

Another global bond warning to add to the long and lengthening list. 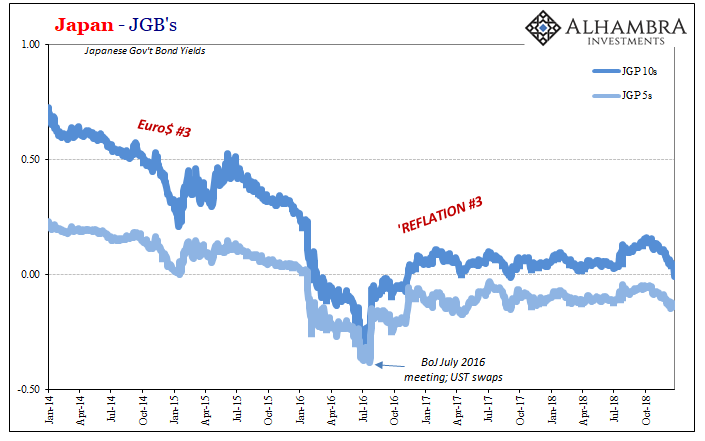 The JGB’s as bunds have been instructive. Neither market priced anything like success for QE or QQE at any point. There was a mild upward trend in rates in both places last year and even this past autumn, as in the US Treasury market, but it was never much to begin with. That didn’t stop the hype, though.

The universal truth across all these markets is the opposite of orthodox convention. Yields fall more outside of central bank buying than with it. The entire paradigm is backward, beginning with the most basic fact of all – what low rates signal. The interest rate fallacy is, after all, a fallacy because modern Economists don’t understand bonds.

Central bankers have no idea what it is they are buying, and therefore don’t really get why they are doing it in any real sense.

Just as CNY DOWN = BAD mocks econometrics and its obsession with formulas, there’s a related one here. Low yields = QE didn’t work.

The reason central banks undertake a QE or some other form of LSAP is because rates are already falling announcing what is already very wrong. They respond and then have the audacity to claim that the response was successful because rates fell. This explains a lot as to how the world’s economy can have lost an entire decade of real growth. 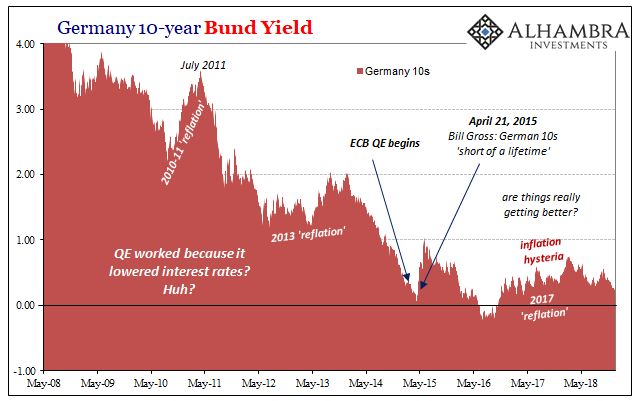 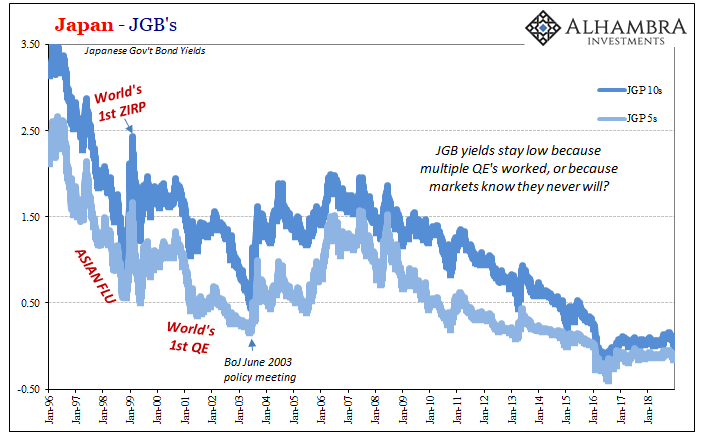 Global yields are dropping again because there is still the same thing wrong with the global money system. QE doesn’t help, it can’t help because central bankers speak the language of expectations and pop psychology not money. Liquidity preferences are the only thing left.

That’s December in a nutshell. 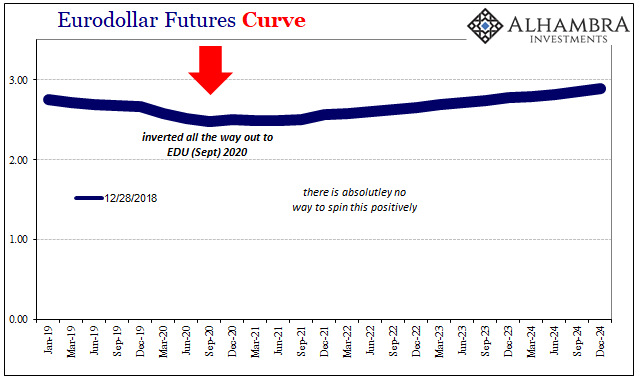