Multipliers and Elasticity: The Other More Consequential Side of Repo

Multipliers and Elasticity: The Other More Consequential Side of Repo

There is increasing skepticism in the mainstream media as to the functions and declarations coming from the Federal Reserve. As a direct consequence of the mid-September repo rumble, for the first maybe ever official opinions and explanations aren’t being taken immediately at face value. That may end up being the lasting legacy of what was otherwise nothing more than a seasonal bottleneck or low point on the liquidity calendar.

For one thing, right off the top, this wasn’t some out-of-the-blue event. Everyone knew what was coming and even more they knew approximately how much of an effect these calendar quirks were going to have. That they ended up creating havoc in funding markets meant something else entirely.

Official attempts to deny and dismiss therefore ring hollow. It’s one thing to claim ignorance about some deeply hidden shadow factor, quite another to be caught so flat-footed in the face of what should have been a non-event everyone saw coming. Even the Wall Street Journal has been less than impressed of late. Writing presciently just before the repo event (on sound advice, I add immodestly) about what seemed to be a lack of institutional awareness, what is typically a friendly paper returned to that theme again in its aftermath:

“There is a serious question about why they didn’t foresee it,” said Nathan Sheets, chief economist at investment-advisory firm PGIM Fixed Income, who previously held senior Fed and Treasury Department posts. “Why were they surprised? What did they miss? And was that a reflection of something not happening at the New York Fed on the desk or elsewhere?”

In terms of policy, it continues to be a lack of imagination. That has been the big problem going all the way back to 2007 and 2008; officials, particularly at the top, believe they know all that needs to be known and therefore have very real trouble diagnosing even accepting events that fall outside of their (very narrow) paradigm.

It is more than bias; it is an intellectual corruption. And it showed at the worst possible time for Jay Powell. The day he wanted to assure the world the Fed would act to accommodate effectively and dependably, the rest of the economy was wondering what in the hell was going on in his very own backyard.

Everyone has since fixated on only one small (and I would say largely irrelevant) aspect – bank reserves and QT. That’s somewhat understandable simply because the way the entire global system actually works has never been addressed. Most people simply have no frame of reference to interpret what are very defined signals, therefore there aren’t any competing explanations which could explain all, or at least more of, the facts.

As I wrote a few days ago:

The funding system used to be a real zoo, full of all sorts of exotic species of “liquidity” all provided by a private (and global) banking system which readily (and greedily) participated in it because it seemed to be one of only asymmetric positives – all return, no risk. Since Bear Stearns, it’s been all risk, no return. The animals in the zoo have more and more been left to die off over time.

So, while the mainstream focuses on the perceived health of those few animals which remain, including the least interesting specimen around, bank reserves, no one seems to (want to) notice just how unpopulated and vacant the whole zoo has become. It’s not the level of bank reserves. It’s the increasingly empty zoo. 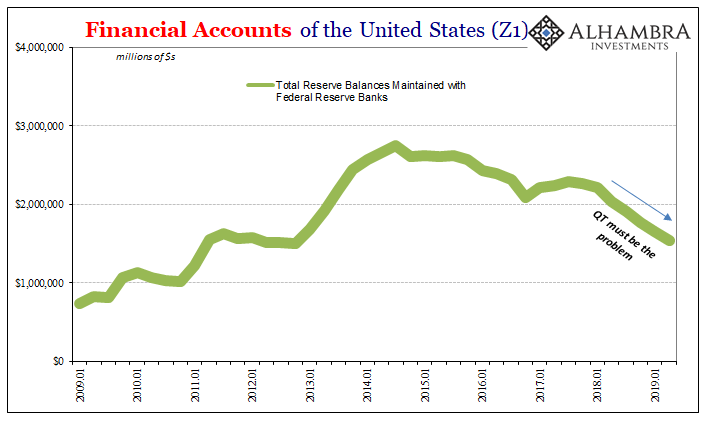 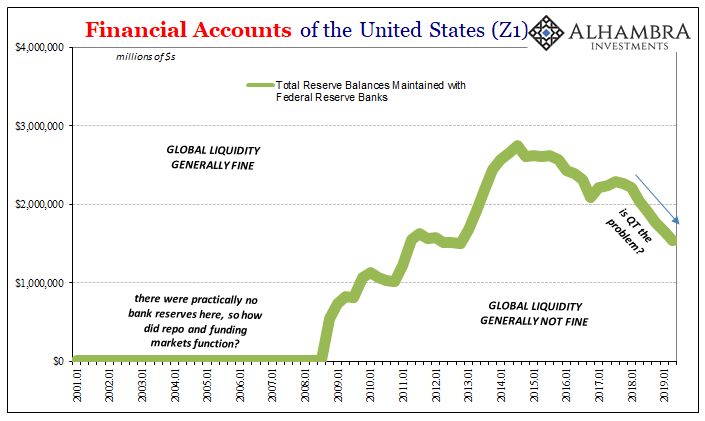 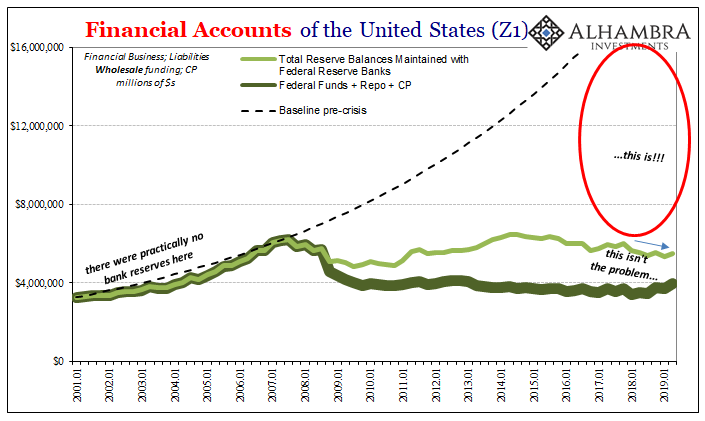 While the media starts to wonder if it should, we don’t have to wait for them to journey a little bit deeper into that empty zoo. What is it that we would want to expect to find there in an otherwise healthy wholesale environment? What might be a key piece of that empty space circled on the chart immediately above?

For one thing – collateral. There are times when it can feel like an overemphasis on the repo market at the expense of appreciating all the dynamic funding arrangements that go on outside of it (the other dead animals in the zoo, the rest of that empty space above). While that can be true, it is also true that repo is probably the central axis upon which the whole paradigm pivots.

On November 30, 2011, for example, the Federal Reserve, Bank of Canada, Bank of England, Bank of Japan, and European Central Bank all issued a statement pledging mutual cooperation. They took, they all claimed, “coordinated actions to enhance their capacity to provide liquidity support to the global financial system.” Among them, the Fed reduced the penalty rate which applied to its dollar swap arrangements between itself and those foreign central banks.

Funding strains had emerged months before then and despite, or because of, varying central bank responses the crisis would only escalate. A little over a week later, the ECB would be forced into its LTRO’s once it became clear Europe and European banks were the epicenter of those strains.

But that wasn’t the only measure Europe’s central bank announced on December 8, 2011. In addition to the LTRO’s which the mainstream media fixated upon (“flooding” the system with “liquidity”), the ECB also created what’s now called the Additional Credit Claims framework. Essentially, authorities began to loosen (as they did in 2008) the collateral eligibility requirements for its most important funding windows and operations.

To give you an example, before that point a bank operating in the Eurosystem (which meant more than just European banks) would only have been able to pledge AAA or AA-rated ABS securities. That threshold was moved down to A-.

That wasn’t the only factor which was changed:

Furthermore, the Governing Council would welcome wider use of credit claims as collateral in the Eurosystem’s credit operations on the basis of harmonised criteria…encourage potential external credit assessment providers (rating agencies and providers of rating tools), and commercial banks that use an internal ratings-based system, to seek Eurosystem endorsement under the Eurosystem Credit Assessment Framework.

So, what did all that mean in very simple terms? To be blunt: banks in Europe had become accustomed to funding their positions and balance sheets (multi-dimensional portfolios and desk portfolios) with crap collateral. The repo market had expanded enough to allow those to be pledged on an easy and flexible basis under the assumption that when things were going right there was little risk to doing so.

As things began to go wrong, again starting in 2010, that assumption was re-assessed in the repo market leading more and more to crap collateral being treated as crap collateral.

But what do you do if you are one of those financial firms who has been funding yourself on nothing but crap collateral?

You buy the crap out of good collateral, where possible, things like German bunds in euros or UST’s in dollars. In the absence of being able to do that, however, what other options might you have? You can try unsecured markets (where you don’t need any collateral) but by and large the dealers operating in those places know who you are and what you’ve been using (crap collateral) in repo and therefore a perception of the elevated risk in lending to you.

Suddenly, in unsecured markets counterparty risk shows up on the tape (a higher and wider range of funding transactions).

The ECB in late 2011 was attempting to fill what was essentially a collateral gap. There’s a multiplier effect at work on this side, the non-cash side of the repo markets (and I haven’t even dealt with securities lending and transformation). Like any fractional reserve currency system, the collateral system expands and contracts, too. And in times of turmoil, it can be just as alarmingly inelastic.

Central banks have proven they are ill-equipped to handle systemic liquidity when collateral contraction might be at hand. Not only does it strand individual firms in funding markets, it also tends to make dealers sit on their hands and express elevated counterparty risk in those unsecured markets – the very thing we began to see in mid-September in US$ repo and fed funds (counterparty risk in the enormous range of the fed funds market). 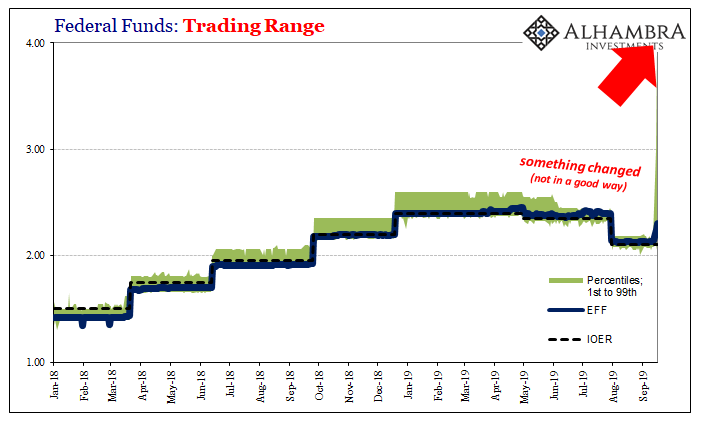 In 2010 and 2011, those isolated firms had been using PIIGS securities and not just sovereign issues as their crap collateral basis, ABS and corporates, too, and that’s why more and more they found it difficult to find liquidity. And it was also why dealers would just sit there and not deal leaving the ECB to try to bridge the divide with LTRO’s on the one hand and a greatly expanded collateral list on the other.

In 2016 and 2017, it’s easy to imagine financial firms spread all over the world using corporate Eurobond junk (a company in, say, South Africa floating a bond denominated in dollars to a bank in South Africa which then funds that position by “borrowing” a UST from a large global dealer bank and then repledging it in the eurodollar repo market) as nothing more than the latest version of crap collateral; or, maybe a domestic firm doing the same thing only starting with some tranche of a shale oil leveraged loan or CLO issue.

The repo system, collateral side, expanded somewhat in the second half of 2016 and throughout 2017 taking in probably way too much crap collateral given the two biggest assumptions underneath what would become globally synchronized growth – both oil and emerging markets would emerge spectacularly from the deep depths of Euro$ #3. 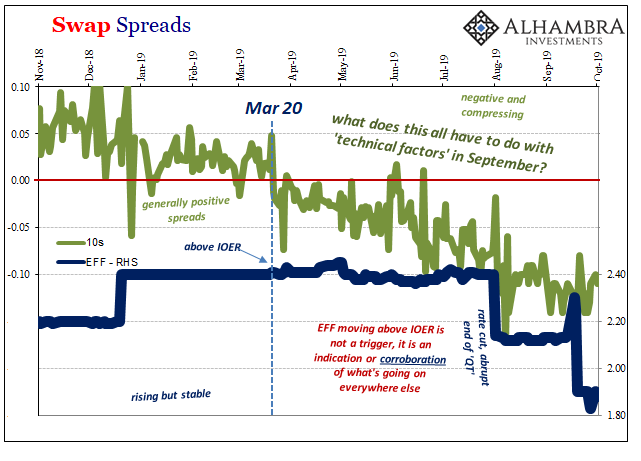 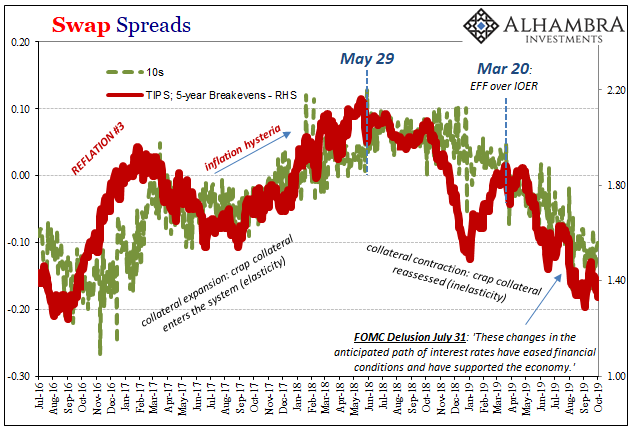 Starting in 2018, those assumptions have fallen under increasing scrutiny (especially after the dollar rose in April 2018 and then the collateral contraction which shows up worldwide on May 29) and therefore so has the crap collateral that expanded the repo multiplier. As it now contracts, slowly, the liquidity cracks (see: March 20, 2019) are starting to become more and more recognizable even in the mainstream context. They were, of course, perfectly evident all along, just ignored for no other reason than Jay Powell’s somehow continued acceptance as an expert on monetary affairs and economic forecasting.

Thus, the danger of last month’s repo rumble isn’t strictly that one piece. It is a lot of pieces that are just now poking above the surface.

Crap collateral, counterparty risk, dealers refusing liquidity functions, and the bungling officials who don’t, because they can’t, offer any reasonable answers. It all sounds entirely too familiar.