The Solution Is To Stop Being Backward

The Solution Is To Stop Being Backward

I knew long before they came out that it was going to be a shitshow, pardon my French. You don’t screw up that badly and let the worst global monetary crisis in four generations happen on your watch with it having been any other way. So, when the FOMC transcripts for 2008 finally came out early in 2014, I knew going into it I would find so many cringeworthy, infuriating discussions transcribed within the hundreds of pages.

I just didn’t expect the level of total incompetence on display. And it wasn’t just the level, but more so the frequency. I figured that there would be some moments of clarity for policymakers, perhaps even soul-searching and honest admissions of how far behind they all were. Nope.

One head scratcher after another. Meeting after meeting. Emergency conference calls filled with little knowledge and even fewer regrets – no matter how bad it got or how much markets melted down.

It all sounds too familiar.

Among the upper tier of stupidity, the one below really stands out. To this day, it’s still hard to fathom how obtuse. To borrow a phrase from Andy Dufresne stuck in Shawshank, it would actually be better if it was deliberate otherwise we’re all screwed.

That’s the manager of the System Open Market Account Bill Dudley (it’s always Bill Dudley), a guy who got this all wrong as well as so many other things (like IOER) that he was “punished” by being promoted to the head of FRBNY. The system rewards routine, not results.

Dudley was talking about the brand spanking new Primary Dealer Credit Facility (PDCF), a radical departure which had been launched two days before – two days too late for Bear Stearns (not that it would have done any good; see: Lehman, AIG). This discussion took place during the regularly scheduled FOMC meeting held March 18, 2008.

What Dudley was saying was that, in the official view, the breakdown in repo funding was due to clearing banks withholding cash from dealers in triparty repo. Fearing, he said, that investors (meaning financial entities like money market funds) might pull funding from the dealers the clearing banks were protecting themselves by keeping the cash and sticking the investors with increasingly illiquid collateral.

Which, as I wrote elsewhere, was practically the whole crisis. The collateral, not the investors stuck with it.

In other words, he’s got it all backward. Nothing about a collateral shortage at all, just the usual, routine focus on the cash side. Even though Bear Stearns had just failed because the repo market wouldn’t take its “high quality” collateral (which, in this case, actually was high quality).

Notwithstanding that Bear Stearns continued to have high quality collateral to provide as security for borrowings, market counterparties became less willing to enter into collateralized funding arrangements with Bear Stearns.

One of the oldest names on Wall Street had just gone down, due to its lack of collateral acceptable to the repo market, and none of these guys is able to grasp the gravity of the situation or even appreciate what that situation is. It boggles the mind how much no one seems to care.

Dudley thought it was clearing banks worried about money market funds while Cox still called it high quality collateral when it was so obviously not accepted that way by the repo market. None of them thought about how they would solve the real problem, a shortage of collateral, because they couldn’t see that it was the problem.

The costs of this mistake were incalculable: Lehman, AIG, the whole Global Financial Crisis 1 and its Great “Recession.”

But these people have learned from this mistake, right? A dozen years is a lot of time to advance from what went wrong.

Not a chance. They got by during it and then convinced the world they saved us from a somehow worse fate – with a puppet show. It just became business-as-usual, the rollover of QE’s rather than the spark of recovery.

If you needed any more demonstration that nothing was learned from GFC1, then I give you GFC2; or, more precisely, GFC2 is given to all of us by these same incompetent Economists. 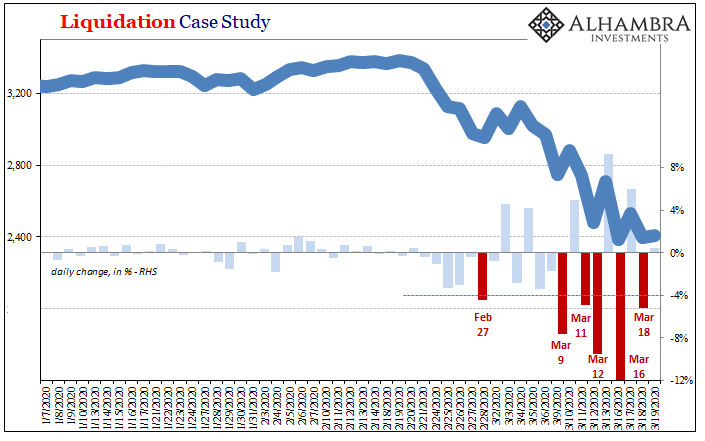 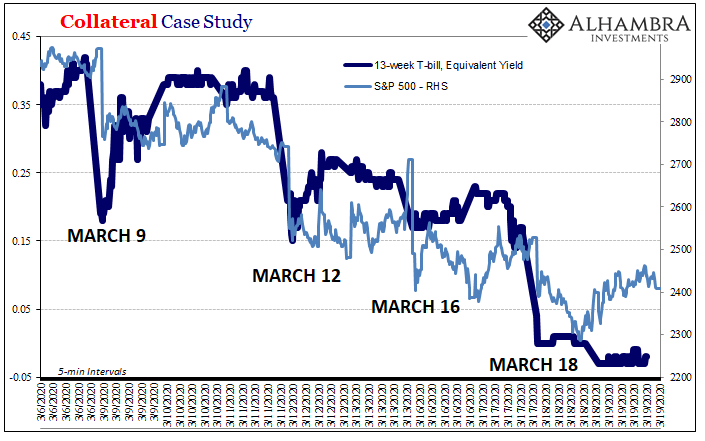 In response to what is an absolutely clear and obvious collateral shortage, the very bottleneck I’ve been writing about for the last couple of years, and I’m just some nobody with an internet connection, these absolutely corrupt morons are just repeating all the same mistakes from the first time. They’re repeating 2008 because 2008 worked out so well? Yeah, no.

What needs to happen is something like a Discount Window – for collateral. A program that is open to financial counterparties all around the world, almost like combining dollar swap lines with a Discount Window except where US T-bills are being offered rather than stupid, inert, useless bank reserves.

Forget using Primary Dealers; they are part of the problem, in many ways the biggest problem piece. Forget about lines with other central banks, too. The less central bankers involved the better. This needs to be wide open to the whole global system, inside and outside the US physical boundary.

The Fed should be working with the Treasury to manufacture securities only with a determination this time. During GFC1, the two did work together on the Supplementary Financing Program (SFP) which did create T-bill-like securities. They’ve already done this before!

But, and there’s always a “but” with these people, as with Dudley’s view on the PDCF, Treasury and Fed officials executed the SFP for all the wrong reasons, having the purpose entirely backward – again. Thus, it failed like everything else.

It did because policymakers engineered SFP bills for reasons that had nothing to do with alleviating the collateral shortage they didn’t understand. Rather, these idiots thought they needed to soak up reserves. I’m not kidding! While visible repo fails would go on to reach $5 trillion, with a “t”, shutting the whole global marketplace down, fire sales everywhere, and initiating the worst economic damage done by the monetary system since the Great Depression, they really thought doing something about the “excess” of reserves was the only reason to be doing this.

When announced on September 17, 2008, just after Lehman/AIG, the press release stated:

The program will consist of a series of Treasury bill auctions, separate from Treasury’s current borrowing program, with the proceeds from these auctions to be maintained in an account at the Federal Reserve Bank of New York. Funds in this account serve to drain reserves from the banking system, and will therefore offset the reserve impact of recent Federal Reserve lending and liquidity initiatives. [emphasis added]

The entire focus today should be on the collateral shortage, not bank reserves. Bank reserves, damn it, are immaterial, a fact which is being proven all over again right at this very moment. Collateral needs to be made up, and then made widely available without delay.

That means screw the mandates and regulatory restrictions; this is a crisis. Get them changed immediately. The US boundary doesn’t matter for the monetary system and hasn’t for decades, therefore the central bank (because that’s all we have available at this moment) isn’t a US central bank but a dollar central bank. There’s an enormous difference.

Which means the Fed needs to think eurodollar, and eurodollar repo collateral in particular.

Create collateral and make it available to all corners. We’ll have to sort out the crap but only after its all over.

Sure, this violates Walter Bagehot’s dictum but it’s too late for that now. Besides, Bagehot never could’ve imagined this situation where the currency which has become inelastic is the collateral!

A global collateral swap – as distinct from asset purchases and title changes. QE’s are backward, too, stripping the system of even more usable repo securities. Any credit losses will be assigned based on credit conditions rather than illiquidity (and I’m incredibly oversimplifying here; it’s a blogpost after all).

And then when it’s all said and done, remake the system so this cannot possibly happen a third time. Blockchain establishing the lineage and parameters of all collateral in use, in real time, no more repledging and rehypothecations. Nothing wrong with repo and wholesale, but it’s long past time to institute some discipline within them – with policymakers who actually know how they work.

Real reform that starts with finding people who could possibly be good at the job, open minded and honest enough to view the monetary system from a scientific rather than ideological perspective. Enough with the PhD Economists, time for some real bankers again. Clean house.

Given how ridiculously incapable central bankers are, however, we’d actually have to start by cleaning house just to have any chance at stemming the crisis with the collateral. Fitting, though, how that’d be backward, too. 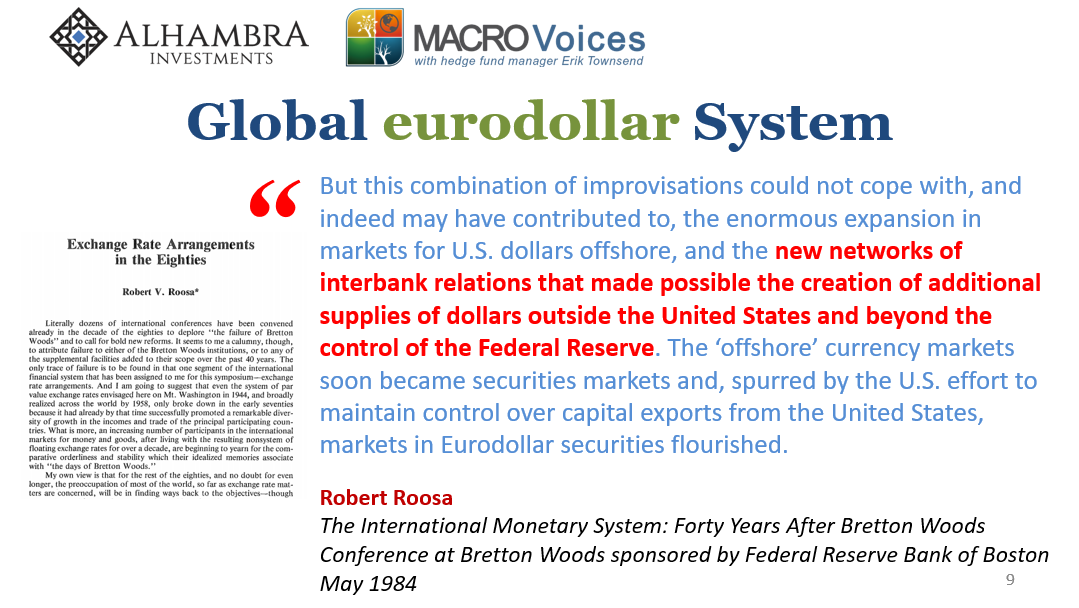