Kittens Are Not Tigers, Bear Did The Dead Cat

Kittens Are Not Tigers, Bear Did The Dead Cat

On Tuesday, March 18, 2008, the S&P 500 big cap stock index soared. By the end of closing that day, the index had added 4.2%. Investors were increasingly optimistic that new kinds of “stimulus” which had been hastily introduced over the prior few weeks and months would provide enough of a boost so that the economic and financial downside might be very small.

It was the beginning of a rally which would last for two months.

Bear Stearns had nearly failed during the weekend before the rebound, shocking news announced to the world on Monday, March 17. Yet, by the close of business Tuesday everything seemed fine.

Something had changed, though it wasn’t clear just what that might have been.

The 18th just so happened to be a regular FOMC meeting. The Committee decided in light of the prior weekend’s emergency that the federal funds target should be cut by a robust 75 bps effective immediately. The day before, on the 17th, the Boards of Directors for seven of the Fed’s branches had taken the unusual step of lowering the Discount Rate by 25 bps for each of their respective operations.

The New York branch of the Fed had already lowered its Discount Rate. On a Sunday night, March 16, in an emergency declaration taken by officials worried about how markets would open the following Monday with Bear’s news fresh in hand, the FOMC announced the FRBNY Discount Rage change while more importantly unveiling what they would eventually call the Primary Dealer Credit Facility. The latter would alter the very manner in which monetary policy was conducted.

Before that particular week, though, the Fed had been equally if not busier. The days leading up to Bear’s demise saw more emergency action than afterward.

On Tuesday, March 11, officials had created the Term Securities Lending Facility (essentially a $200 billion collateral swap of UST’s owned by the Fed in exchange for MBS junk the repo market wasn’t accepting on workable terms). On the same day, overseas dollar swaps were greatly expanded, increasing total capacity by $12 billion (which was a lot, or seemed to be, in those days) and extended to September 2008.

Meanwhile, TAF auctions became weekly with much higher caps for each one ($50 billion).

It was weird how before March 14, Bear Stearns’ last day as an independent firm, no matter what the Fed did nothing could stop the liquidity run. It wasn’t just Bear, either, Carlyle, nor was the FOMC’s response limited to what I’ve recounted above; we can’t forget January 2008 when Ben Bernanke cut the fed funds target by 125 bps in two moves only nine days apart.

Yet, Ben Bernanke would go on to watch helpless as a kitten as the situation spiraled further and further out of control toward what he thought would be his worst nightmare – a rash of big bank failures.

And then once Bear did go down, suddenly he was a tiger through nothing more than the Discount rate and PDCF? Did monetary policy suddenly discover and apply the right combination of magic potency during that one weekend in March?

The way you hear it told, yes, that’s what we are supposed to believe. That policymakers cutting through their own desperation finally arrived at the exact right combination of “liquidity” programs. It had to be that otherwise if the difference turned out to be instead nothing more than getting past some mid-March calendar bottleneck there’d be Hell to pay later on.

No one wanted to think about that.

In addition to all the Fed’s busyness, the federal government had gotten heavily involved, too. The Bush Administration’s helicopter had been authorized in early February 2008. American adults would receive $600, most of them, for no other reason than being American adults. Powerful “stimulus”, they said.

Yet, by July 2008 it was pretty widely acknowledged how the tax rebates had been saved rather than spent as intended. According to several studies, including those conducted using the Federal Reserve’s models, two-thirds of all American adults who had received the payment saved the majority if not the entirety of their $600 “windfall.”

No matter. Somehow this “stimulus” was commended even by those who had discovered its major faults.

Nonetheless, the rebates were so large and so quickly disbursed and the fraction spent was spent so rapidly that they had a non-trivial effect on aggregate spending in the second and third quarters of 2008.

The far greater effect was on the official imagination. No matter how any of these programs actually perform they are viewed as a success long before they’ve been unveiled. Stimulus, to these people, always works! Even when it doesn’t.

You can imagine the situation in markets, if you didn’t actually live through it. Everyone in the financial media says this new “stimulus” stuff is awesome and effective, and the world had just seemingly survived the experience with Bear relatively intact. Having no knowledge of, and real appreciation for, the calendar quirk, maybe Tiger Ben did work some magic.

Combined with these helicopter payments, it suddenly didn’t seem so outlandish to begin thinking about how the country really could avoid anything other than a minor hiccup. 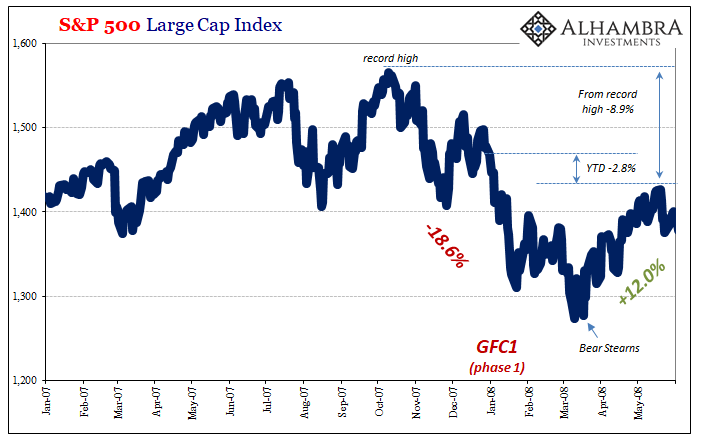 It gets lost in the history of GFC1, but up to that mid-week in March 2008 the stock market really hadn’t lost all that much, either. It wasn’t even a technical bear market, not quite a 20% downside for the S&P 500. Faith in the Greenspan “put” was quite high.

The rally which began on March 18, with the 75 bps rate cut and the PDCF in the rear view, the dip buyers and short coverers started buying and covering in often frenzied fashion driving stock indices up at a 45 degree angle.

With ideas of effective stimulus being passed around without any critical comment, by mid-May 2008 the S&P 500 was less than 10% below its record high. For the year 2008 to that point, it was down less than 3%! Everything seemed to be working, the whole subprime mess maybe had been contained even if it did cause the one bank casualty.

Not too bad of a worst case.

The FOMC sure thought that way. When policymakers gathered in June 2008, the cautious optimism which had been expressed since the mid-March “shift” became more the latter and less the former. A sample:

MR. HOENIG More broadly, turning to the national economy, I have revised up my growth estimate for the first half of 2008, but it has made little change in my longer-run outlook. Compared with the Greenbook, I see somewhat stronger growth in the second half of this year and somewhat weaker growth next year and in 2010. I continue to judge that the potential spillover effects from the financial distress have understandably been overestimated in this Committee’s recent decisions and in Greenbook forecasts in recent months.

MR. LACKER On the whole, I think the risk of the national economy sinking into a serious recession has receded, and the growth outlook has edged up a bit. I was relieved by the strength in retail sales in May as well as the upward revisions for April and March. The ISM indexes have steadied at right around 50 over the past four months; and although the labor market has been weak, it has not yet shown the accelerating declines that I feared.

MR. PLOSSER From the financial side, credit spreads have fallen, bond issuance has risen, and it appears that financial market functioning has at least improved. In my view, although downside risks to growth remain, the tail risk of a very bad outcome has clearly been diminished.

MS. YELLEN. The aggressive policy actions that we have put in place since January are actually working to cushion the blow, and that’s part of the reason that we haven’t seen a greater unraveling so far.

MR. BULLARD Recent data on the U.S. economy have been stronger than forecast, keeping economic performance weak but avoiding a particularly sharp contraction. The worst outcomes stemming from financial market turmoil have failed to materialize thus far. There is, to be sure, still some potential for additional upheaval, depending in part on the managerial agility among key financial firms. However, the U.S. economy is now much better positioned to handle financial market turmoil than it was six months ago. This is due to the lending facilities now in place and to the environment of low interest rates that has been created. Renewed financial market turmoil, should it occur during the summer or fall, would not now be as worrisome from a systemic risk perspective. [emphasis added]

I could go on and on. And that’s just from June 2008. Charles Plosser was so confident he was already thinking about rate hikes, saying “if the economy continues to evolve as it has over the past couple of months, we should move to raise the funds rate.”

Those would’ve begun right around September 2008. No small miss.

This should all sound eerily familiar to you – right down to kitten Jay somehow becoming Tiger Jay in the second half of the month of March.

What really had happened back then was two things. The first, as I noted, mistaking action for stimulus. Just because the Fed or federal government does something doesn’t immediately make it effective. This may be how all the stochastic models forecast these things, and that’s why they end up being less than useless.

Because the mainstream view counted on all these measures being effective, it was assumed second and third order effects from the first part of GFC1 experienced to that point would be blunted. It’s never the immediate consequences of something like a crash that kills the economy, rather it’s what that crash does to next level factors like consumer and business spending.

Getting $600 in the hands of Americans quickly really was expected to be a guard against the growing “subprime” debacle, dampening and counteracting much of the short run damage caused by the crisis. 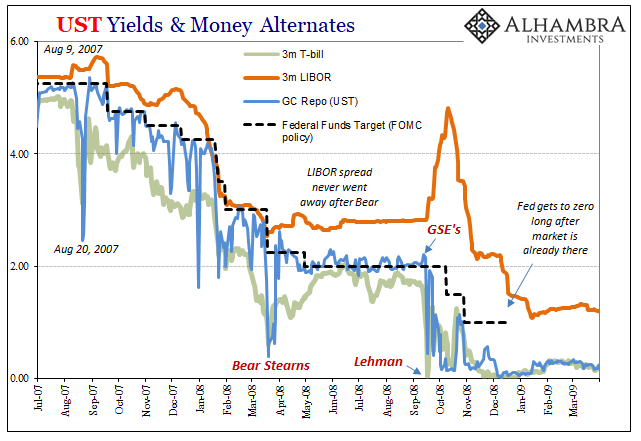 And the Fed’s liquidity actions, my god what a masterpiece (they said)! The mainstream media like the policymakers themselves fell in love with how courageous these clowns were being – no one ever stopping to just observe the stubborn LIBOR spread and question whether the word “liquidity” was the appropriate one.

For a couple months in the middle of 2008, it was faith and FOMO. Faith in the government and the central bank combined with the great Fear Of Missing Out over what mainly stock investors worried would have to be a huge rally surely unleashed by so much effective economic and financial stimulus.

Bernanke’s emergency actions plus Bush’s big helicopter. How could it possibly go wrong?

There’s a reason, however, why they call it a dead cat bounce. The cat’s already dead. But, in the early days of a crisis, no one wants to believe such a terrible thing; to the point they’ll tell themselves they really do see a tiger instead of the kitten even after it had been totally confirmed by the Bear. 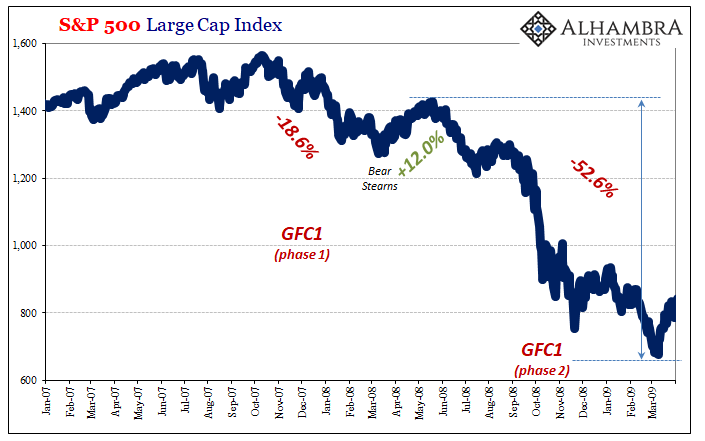