Roaring GDP, So What’s That In The I

Roaring GDP, So What’s That In The I

US GDP both nominal and real came roaring back in Q3. Posting its largest single quarter gain ever, and it’s not even close, the domestic economy appears to have surmounted the COVID obstacles as well as others imposed by Q1’s GFC2. These estimates are the most gigantic yet.

It turns out, to this point, the econometric models actually have been far too pessimistic. Most, if not all, had been forecasting that it would take until the end of next year at the earliest to close this enormous gap. Instead, on the surface here, it’s looking quite “V”-like in the United States. 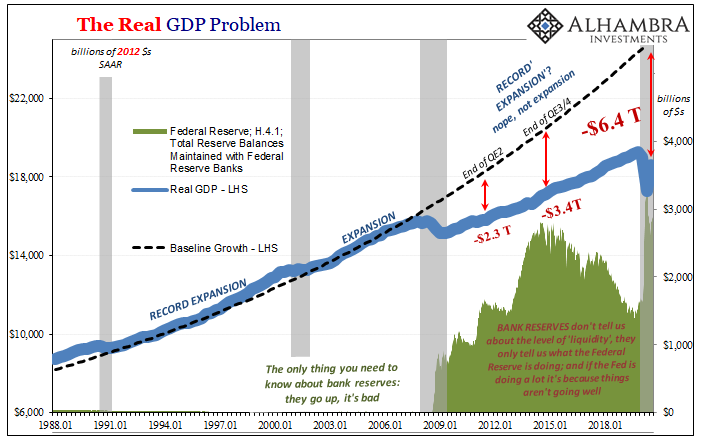 So, why doesn’t it feel that way? Markets, even stocks, sure aren’t trading like that, not any longer. They had been so thoroughly infused with optimism but only up to early June, and since the beginning of September trading more broadly has been marked by the distinct absence of it. As we noted several times now, starting with crude there’s been two inflections that after the second one has left many suffering renewed “market volatility.”

Serious doubts, in other words, despite the unsurprisingly enormous rebound in US real GDP.

The easy answer is COVID’s long-dreaded second wave. Europe is perhaps a worrisome example in that regard. But what Christine Lagarde had said earlier today was that the European system is “losing momentum more rapidly than expected.” That statement more clearly aligns with the timing of market changes globally, worries about underlying weakness in the economy leaving it susceptible to any negative factors.

To see why the GDP numbers might be materially obscuring the US situation, leaving it perhaps closer to what’s going on in Europe than anyone should be comfortable with, we’ve got to go through the arcana of its calculations first – beginning with those of its twin.

GDP is the economy’s expenditure side which is the side from which we usually analyze changes in output. For every expense, though, it is someone else’s income. GDP from the income side is GDI. 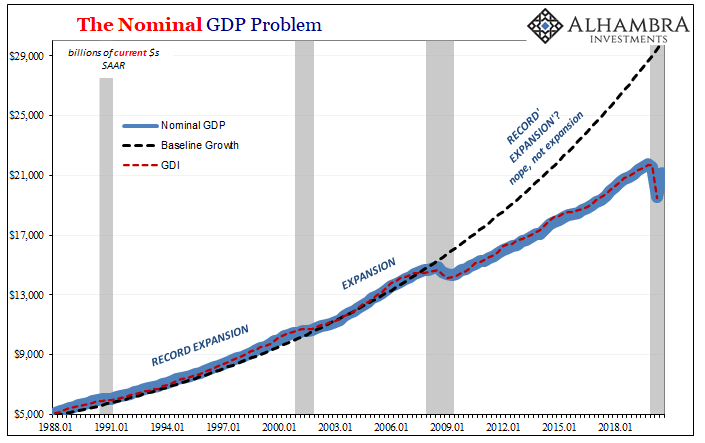 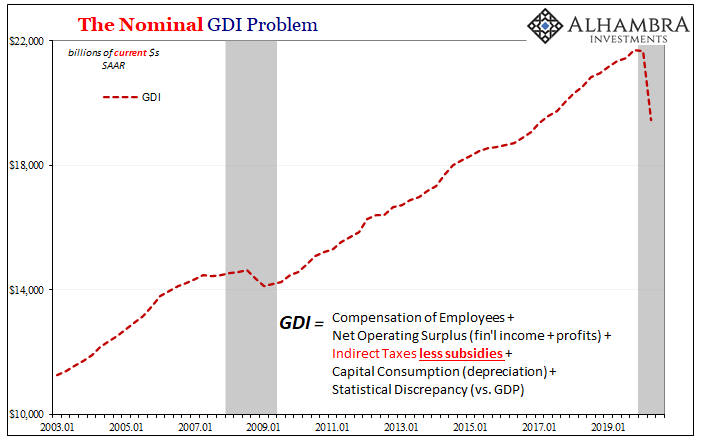 GDI consists of wages and other forms of labor compensation (including 401k contributions, among many) plus something called the Net Operating Surplus (NOS), which is really financial income along with corporate and business profits. Combined, those give us the net domestic product (at factor cost).

To that net we add indirect taxation (taxes on production and imports). These are counted rather than subtracted because in GDP/GDI accounting the government has its own income stream to pay (partly) for expenses included on the expenditure side. The balance of these taxes, however, gets reduced by subsidies paid to industries (which will become very important in a minute).

Subsidies amount to a transfer payment, and GDI doesn’t do transfers because they would be a kind of double counting. In other words, the transfers, subsidies in this case, already show up largely in corporate pockets tabulated already under the NOS.

What’s left is to add capital consumption (depreciation) and altogether we have GDI (and then a statistical discrepancy compared to GDP). 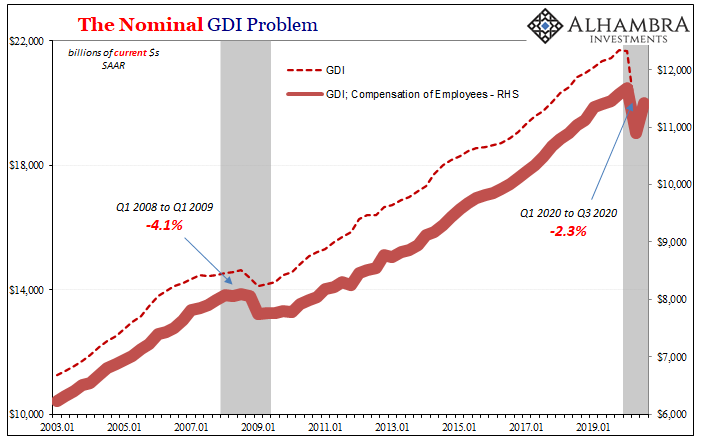 The “V”-ike picture one might get from using only the published headline growth rates for real GDP isn’t quite seconded by the data pertaining to the labor market. While calculated output appears to suggest an economy nearly back to even with Q4, unrelated labor data (like jobless claims as well as the CES and CPS surveys) shows a much, much wider gap remaining – particularly through September, which, in terms of especially the labor force, had left the opposite impression of GDP.

Even on the GDI side, compensation figures (above) show that income in Q3 remains at seriously recessionary levels. Compared to the Great “Recession” top to bottom, this current one top to Q3 isn’t really that far off. A nasty recession is 1 to 1.5% of reduced income.

In other words, despite GDP making it seem like the economy rebounded nicely, last quarter the labor and income figures contrarily suggest much more caution on the part of employers therefore businesses. GDP up, labor stayed down.

Subsidies are the likely culprit. They’ve become, to put it mildly, enormous. The most gigantic of these gigantic positives in GDP and GDI relate to the government: 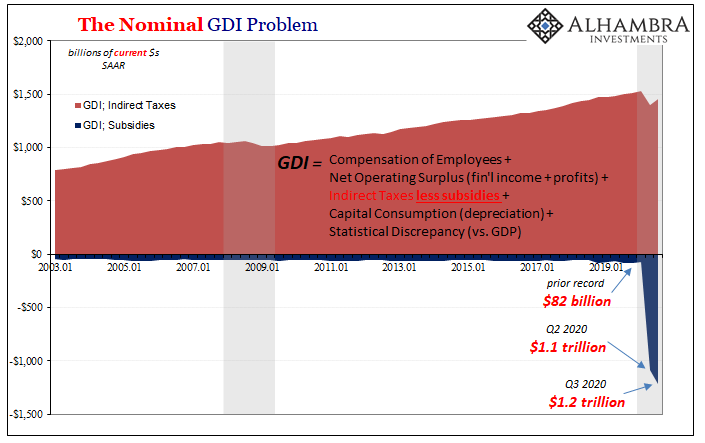 Up until Q2 2020, the CARES Act was passed right at the end of Q1, subsidies had been nothing, a rounding error in the federal leviathan’s intrusion upon the real economy. The highest these had ever been was $82 billion in Q3 last year.

While that may have been “too much” for what’s supposed to be a free market economy, in Q2 the level jumped to nearly $1.1 trillion (annual rate) as the feds handed out loans-to-be-wink-wink-forgiven-becoming-grants to anyone and everyone. That number grew to more than $1.2 trillion during Q3 (and still, curiously, no inflation!)

Remember, though, these enormous subsidies are subtracted from taxes therefore overall GDI. But don’t get caught up in the accounting; what they show is that in other places inside of GDI there’s been that much “income” to businesses due to artificial payments in the place of real productive economy processes (like revenue and investment). 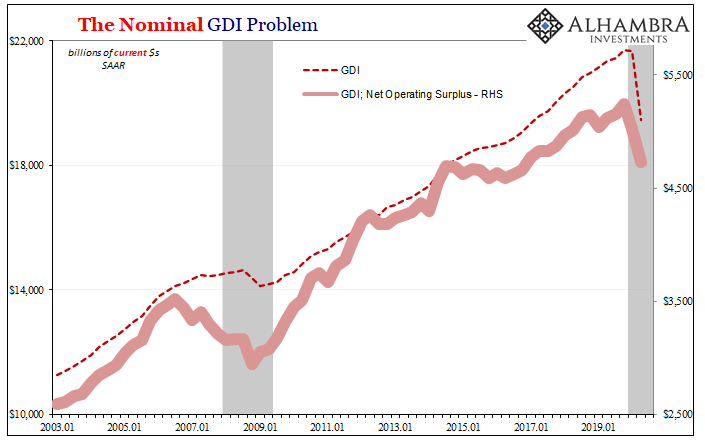 When we look at the Net Operating Surplus (which is only updated as far as Q2, corporate profits won’t be included until the next set of GDP revisions meaning that overall GDI isn’t yet complete, either), you might be surprised at just how little it declined compared to everything else during the contraction.

The reason is subsidies; they’re in there somewhere, having kept business surplus higher than otherwise.

So, if we back out the subsidy figure – just for rough illustration purposes – the difference between GDP and what we see in the labor market becomes less of a gap. 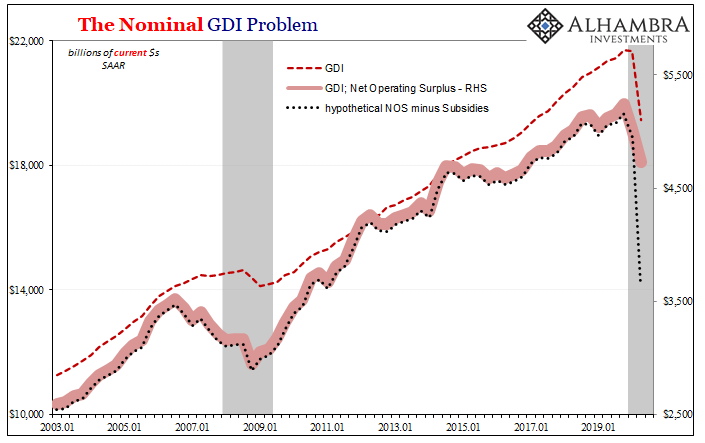 It’s not likely as bad as shown above, but we’ll continue with the illustration anyway plugging in a rough guess Q3 NOS estimate of $5.3 trillion (which would put it above the prior peak) and then backing out Q3’s $1.2 trillion of subsidies. The difference of what would amount to the underlying private economy condition is enormous even if we aren’t really that close with our illustration. 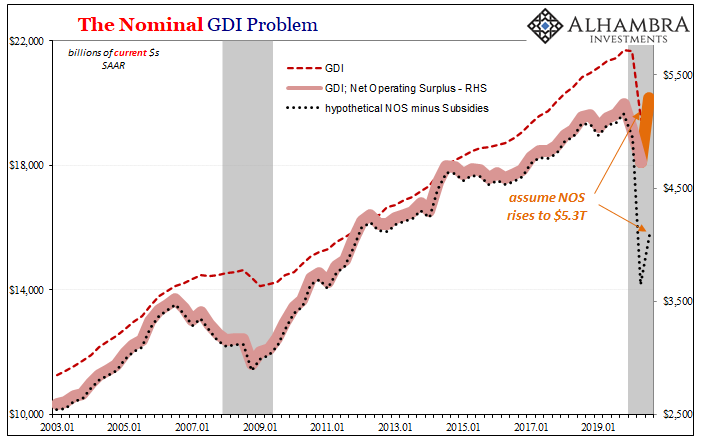 It’s the permanent income hypothesis coming to life out in the real world. The government is paying businesses an enormous sum, a gigantic windfall, but they aren’t acting like it’s “stimulus.” I wrote about this elsewhere for publication tomorrow:

Companies react to a regular stream of customers very differently than they do should a huge percentage of their customers disappear. Even when in the aftermath of that disappearance Uncle Sam shows up to make up much or even all of the cash difference.

A steady stream of customers indicates something about the future that isn’t written anywhere on the government’s digital checks. And everyone knows, as has been reinforced repeatedly over the last month or so, those checks are subject to partisan bickering and political forces including colored interpretations about how things might be going from the point of view of the top down.

While these details might be surprising, as hard as they are to find and then compartmentalize in a rational way, people (investors, consumers, employers) largely have understood this is what has been going on. It’s not a surprise to find a massive federal government imprint in the economy; it’s only surprising in how difficult it may be to find this in the GDP accounts.

The economy’s magical revival has been bought and paid for, thus far, by the Treasury Department. Everyone, I think, has known this all along.

What’s bothering markets, therefore, is that when you (roughly) account for it you begin to realize that, not unlike Europe, the private economy must not have rebounded nearly as much, and that things could be downright ugly despite the gigantic headline plus-thirty (not compounded) that’s been thrown around today.

The “V” narrative in markets, after all, had changed just about two months ago for this very reason. It’s been all about “stimulus” in the new narrative because there’s been so much of it responsible for the real world. That’s not at all how it “should” be going.

Can the government really “buy” anything more than the appearance of recovery? Are ad hoc government payments close enough substitutes for genuine business and economic activity that hasn’t (yet) come back? Those really are the questions, as they are, I believe, the source of all these growing doubts. 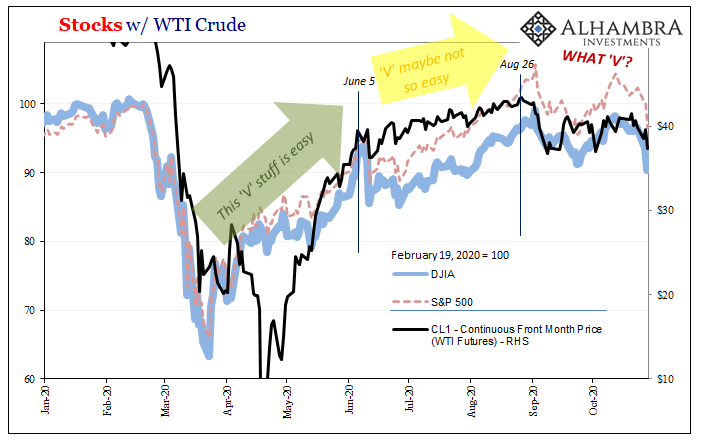 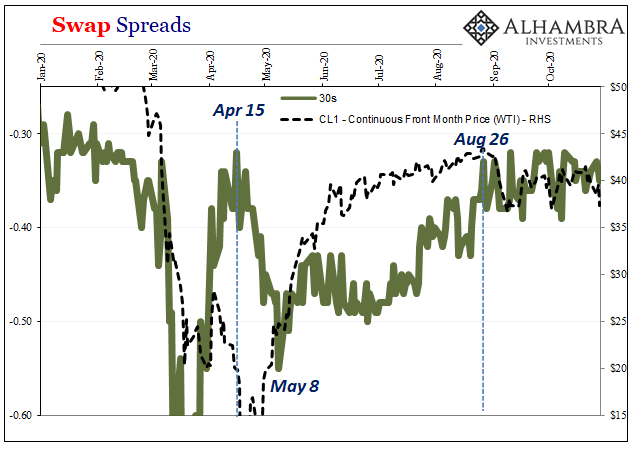 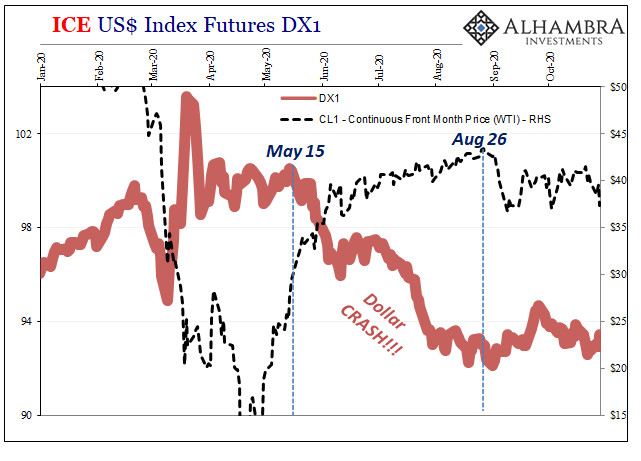