It was only three years ago, so you’d think narratives today would at least try to account for relevant recent history. If that prior first fit of inflation hysteria had a birthdate, it would’ve probably been December 18 or 19, 2017. On the former, the US House of Representatives passed their version of the Tax Cuts and Jobs Act (TCJA); the latter, the Senate voted for same over the arcane parliamentary objections of the body’s arcana Parliamentarian.

Over the next several months, though, true hysteria followed. And for all the same reasons: “inevitable” currency destruction.

Money printing and positive economic numbers. Combine those two things, and they don’t even have to be concurrent, as late 2017 proved, and the whole world simply believes there’s no other way forward. Reinforced by only one set of media messages – crafted under the unitary tutelage of central bankers doing the, wink, wink, money printing – an inflationary fire of recovery can only be just one spark away.

In December 2017, explosive debts introduced by TCJA were going to be that spark.

Central bankers themselves are always careful not to tip their hand too much, projecting forward using more modest language so as to set only the direction of media expectations and let the financial press take it from there. Once set in motion, officials have learned to sit back and watch the narrative explode; in this case, into pure, undeserved hysteria.

The process had begun before TCJA was anything other than a bill under Congressional consideration. On December 13, 2017, for example, then-Federal Reserve Chairman Janet Yellen merely stoked the coming with innuendo by confirming what “everyone” had already been thinking:

Changes in tax policy will likely provide some lift to economic activity in coming years. The magnitude and timing of the macroeconomic effects of any tax package remain uncertain.

Overall, I expect that lower personal tax rates will boost aggregate demand, and that a lower corporate tax rate and the more favorable tax treatment of investment spending will increase aggregate supply, although it is difficult to predict exactly how and when consumers and businesses will respond. The result is that an uncertain degree of fiscal stimulus is arriving at the same time the economy is operating at or beyond full employment and monetary policy remains accommodative. [emphasis added]

Authorities carefully hedge with words like “difficult to predict” and “remain uncertain” but the message is perfectly clear nonetheless: watch out for the “fiscal stimulus”, could maybe turn out to be the catalyst (fancy word for spark).

In late 2017 and early 2018, the exploding, dollar-destruction deficits of TCJA was just the thing. Even the bond market agreed. Or did it? 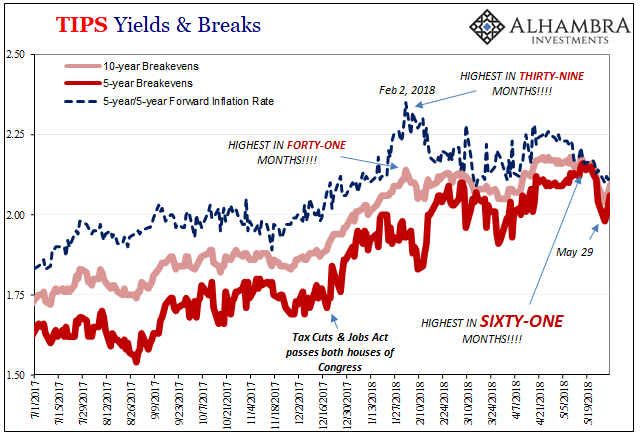 In the ensuing rampage, from mid-December 2017 until early February 2018, inflation expectations (TIPS) surged. Breakeven rates leapt to broach new multi-year highs which were equally parroted as proof positive the fire of inflation had already been lit. The 10-year breakeven rate would move up to its highest level in three and a half years. Shorter-term, the 5-year breakeven would keep going (following oil) all the way into May 2018, reaching its farthest inflationary peak since 2013, nearly five years before then.

Yet, all those “highest since…” points were missing key context (below). Inflation expectations had indeed risen, a touch. Rather than signal a huge, massive, surefire outbreak of consumer price acceleration, however, market-based expectations remained skeptical pricing instead this possibility only slightly more plausible with TCJA.

In truth, inflation expectations, like nominal Treasury yields, didn’t actually go all that far upward. Better than the prior lows, small rebalancing of probabilities, is not the same thing as 1970s-Great-Inflation-coming-to-a-store-near-you; such nuance is left out of the narrative.

As you can see below, even at peak hysteria, inflation expectations never even reached their precrisis (stable) average. Hardly the proof of money printing excesses combined with currency devaluation being amplified by massive deficits all reaching a globally synchronized economy at full throttle with the US contributing full employment on top.

TIPS had only ever indicated that it wasn’t looking as bad as it had been in the middle of 2016 (at the end of Euro$ #3). It was still quite bad, in the inflation arena more undershooting than not remained the baseline: 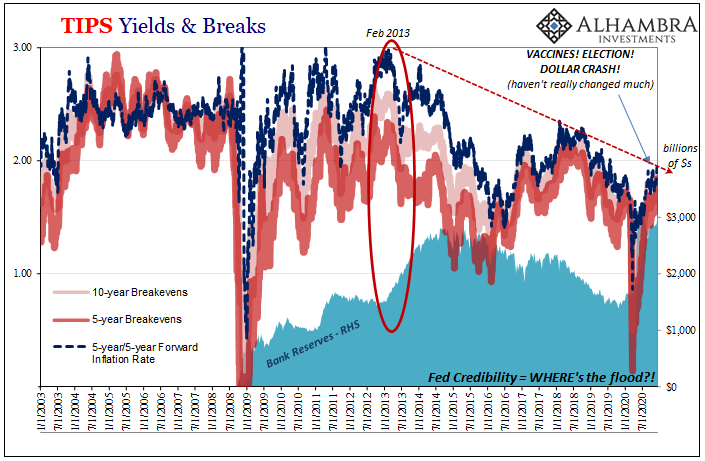 WTI will influence the short-term TIPS yields if only because TIPS protection is paid out by the government based on the CPI – which is moved around by the crude price. The resistance to elevated crude in outer-maturity inflation expectations for the middle months of 2018 was a curious dissent even as Jay Powell took over from Janet Yellen and more directly spoke of the need for “hawkishness.” 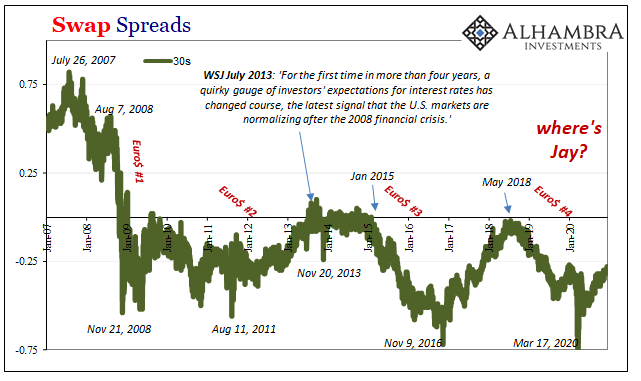 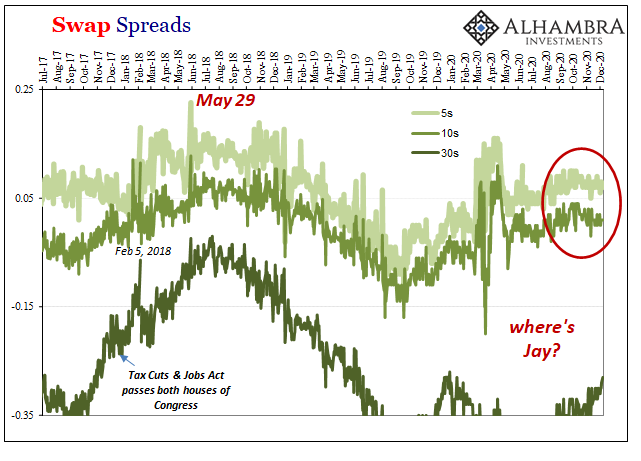 The 30-year spread (more reflationary beta) reacted more to the December 2017-February 2018 hysteria, though hardly joined at the shorter maturities. And even then, like TIPS, the 30s never really got all that high when compared to the wider historical context.

In other words, the whole episode had been blown way out of proportion due to the same false assumptions about money printing needing only one more key piece to pull it all together and unleash the currency destruction of legend (or just the moderate inflationary recovery of Keynesian models).

That much was easily proved within a few short months if not already during its apex. The US dollar had stopped “crashing” in January 2018, and then rose sharply by mid-April (as longer-run inflation expectations and shorter-term swap spreads began to compress again) boosted (not by “too many Treasuries”) by a growing catalog of indications pointing in the direction of Euro$ #4.

Inflation, in other words, never really had a chance just as the market was saying all along when you got past the ultimately meaningless “highest in…” style points. 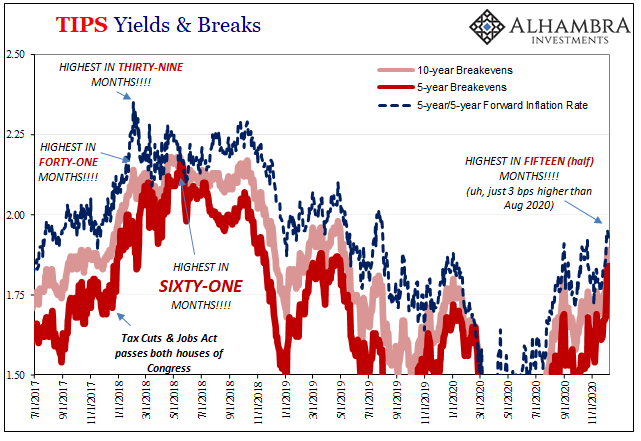 For one thing, the entire global economy hadn’t been pitched into the pit of one of the deepest global recessions on record. At least in 2017, globally synchronized growth was technically accurate; ultimately meaningless so far as inflation and recovery had been concerned, but there was a real upswing adding to the economic situation.

In 2020, the economic numbers may be positive and at times gigantically so, but it’s not nearly the same thing; as more recent data can attest, today is categorically different. We’re still in recession right now, and the upswing supposedly out of it has taken a clear turn away from “out of it.”

In the US like Europe, vaccines and more fiscal spending combine to give the same hysterical narrative new life. Even inflation expectations are their highest in a year and a half (5s).

And that’s not even close to where inflation expectations ultimately fell way short the last time during Hysteria #1. It’s a story put together by corruption, not reality nor rational analysis. Thus, why would 2021 be different than, say, 2019? Why would inflation breakout now like they said in 2018 when they got it all wrong back then? 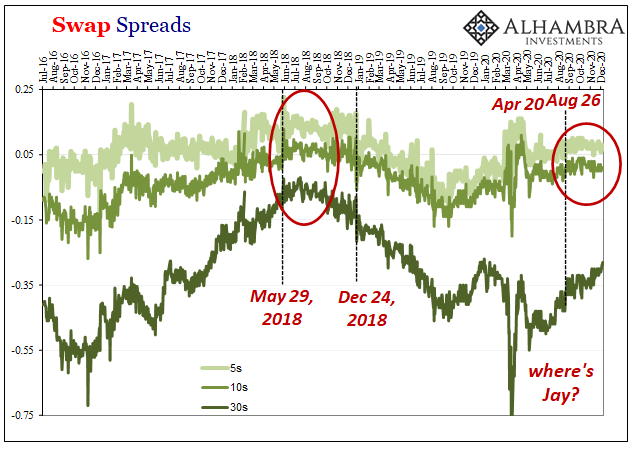 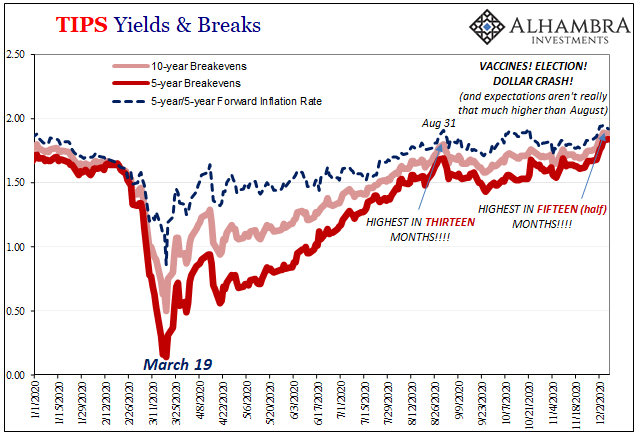 Despite everything that has supposedly lined up in its favor over the past few weeks and months – vaccines, relatively riot-free election, falling unemployment rate – in the TIPS market it’s only the 5s following WTI again. The 10s are up, not nearly as much. More to the point, longer run inflation expectations, such as the 5-year, 5-year forward inflation rate, this is but a few bps above the level reached back at the end of August.

Vaccines, more ungodly amounts of “stimulus”, falling dollar, etc. All that for +3 bps?

Meanwhile, the 30s swap spreads are moving upward but slowly, while the belly of the curve where the fire would originate, spreads there are compressed again during all that supposedly vaccine-aphoric, election-soothing, unemployment rate dropping awesomeness.

Why? Very simple; reality. The upside is considerably less now than 2018 while the number and seriousness of further dollar squeeze-inducing, deflationary potential factors have exploded by comparison. Dollar shortage always comes first, which is why Inflation Hysteria #1 was never more than that (quickly dying away not unexpectedly under the obscene duress of Euro$ #4).

The headlines will scream, as they did three plus years ago, about inflation expectations “breaking out.” Technically true, purposefully misleading, ultimately meaningless. Better than March 2020 doesn’t mean what it is supposed to, and that’s already with TCJA (CARES Act) on steroids.

We keep repeating history because “money printing” and the “inevitable” currency destruction awaiting only one more spark. Just one more. It’s all they’ve been saying for a decade, a decade that instead has been marked only by one dollar shortage after another.

The only thing inevitable here was Inflation Hysteria #2.