What Happened To The ‘Bring Everything Back’ Function?

What Happened To The ‘Bring Everything Back’ Function?

The good news, such that it might be, is that the BLS – using data from the Census Bureau – believes that the American population is slowing down. According to the latest Civilian Non-institutional population estimates for January 2021, published alongside the current payroll report, the count was adjusted downward by around 400,000 consistent with the same kind and level revisions of the prior couple years.

Demographic trends like this aren’t normally taken for a positive. But with fewer new Americans, the struggling economy won’t have to create as many new jobs to keep them gainfully employed and out of the streets. As it is now, forgetting the 10 million who lost jobs last year and didn’t get them back, as politicians and Economists alike tend to do, the labor market isn’t even keeping up with reduced population expansion. 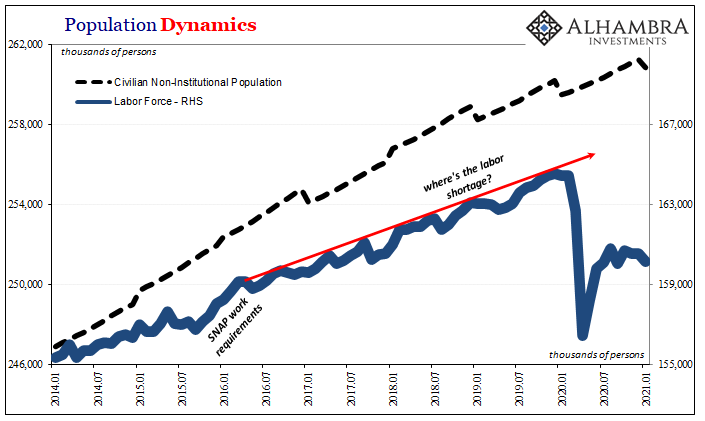 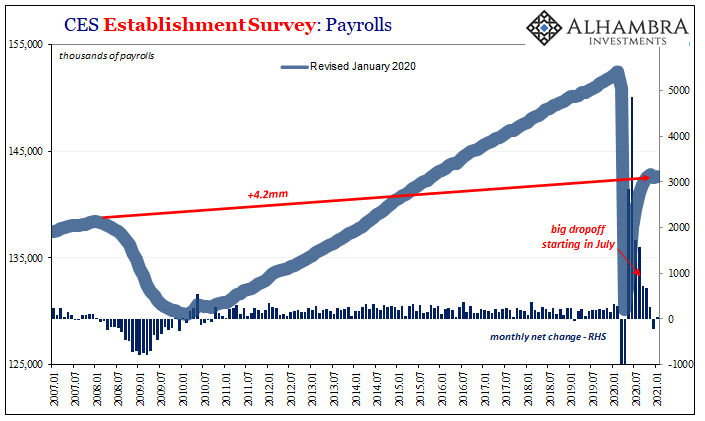 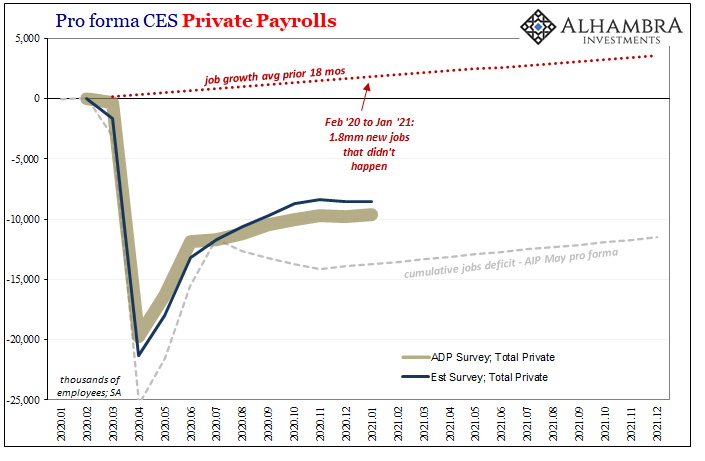 The tally of payrolls which didn’t happen is creeping upward so as to become as much of a depressing prospect as the ongoing count for those which have yet to come back. Assuming a very conservative rate of +163,000, the average from the eighteen months of slowing growth previous to COVID, which would still be just short of enough to absorb new potential entrants anyway, going back to February last year there’s at the very least 1.8 million jobs which never had the chance.

A more realistic number would be above 2 million.

Closing in on a year since the shock, there are now three labor pools to consider inside all these employment numbers; the two we’ve been expressing since it started – 1. Those who still otherwise had jobs but couldn’t work at them, and have long since gone back; 2. Those who lost jobs and have no work to go back to – and now a third that includes the several million who would’ve become employed workers except no work materialized from which to engage them.

It all adds up to an entirely too familiar situation – job “growth” in name only. In truth, the economy is falling farther and further behind.

The latest payrolls estimate for the month of January 2021 ended up being on the plus side, if barely, which, given the totality of the current situation, doesn’t really matter. The headline statistical change was +49,000 following a downwardly revised -227,000 in December. Private payrolls increased by just 6,000.

A small plus, a decent minus, something in between, these are all the same because the dominant factor right now is time. Eleven months in and we’ve experienced a condition for workers, particularly at the lower ends of the income scale, substantially worse than the Great “Recession.” And with the last seven those at increasingly decelerating gains, the economy overall appears stuck here no matter what happens. 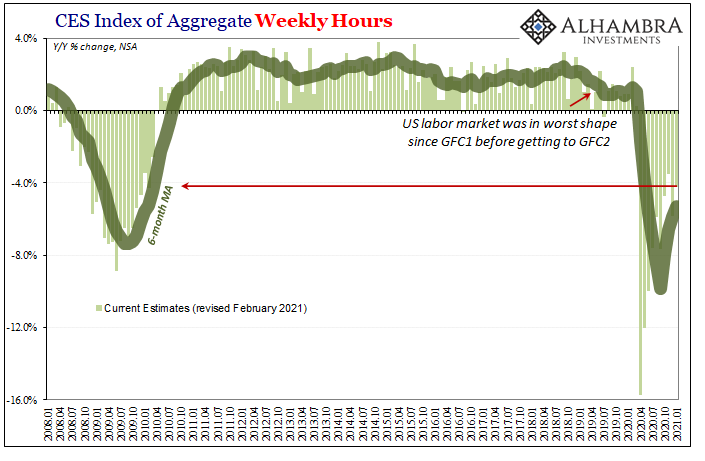 Many, maybe most, are thinking and betting that this just won’t matter. Sure, it’s awful and painful for those going through it, but another thirteen-digit government intervention will right this wrong, and along with a smooth, efficient-running vaccination program it will all add up to normality mere months ahead. Bad today, all better tomorrow, not worth bothering about in the meantime.

If that’s the narrative, then American workers just aren’t buying it like many markets – including those in the Treasury market who shorted the long end hard not long after the BLS report was released this morning. Stocks are at record highs while the labor force shrunk yet again (though some of this month’s 406,000 decline is related to the population estimate discontinuity mentioned above). 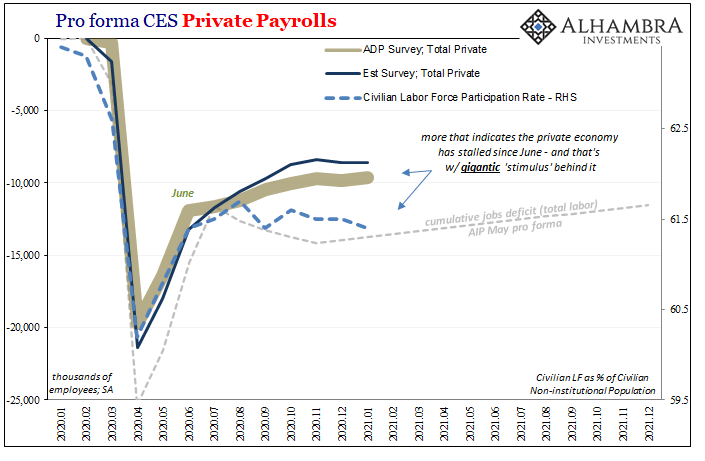 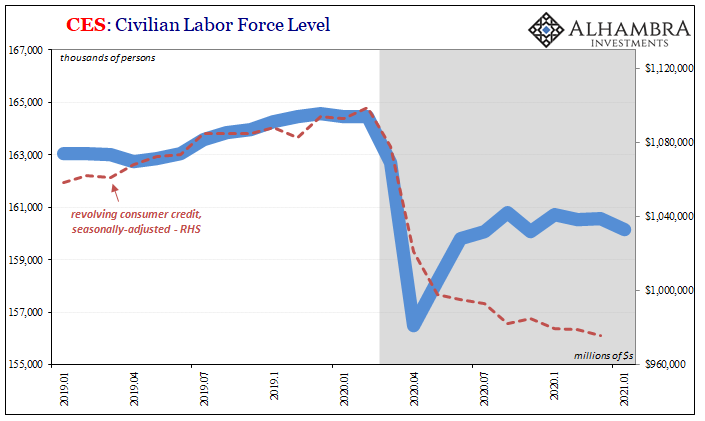 The Labor Force Participation Rate (which includes the Civilian Non-institutional population in its denominator) dropped back to 61.4% in January – the same as in June last year. Going back to the previous February, the labor force contains somewhere around 4 million fewer Americans who have given up even looking for work because, given the trend, can you really blame them (corroborated by the continued decline in revolving consumer credit now extended into December)?

However, those 4 million who have come out the labor force also have to come out of the section of the labor force categorized as “unemployed.” Technically, they are neither employed nor unemployed. The net result is, as had been the case for years before COVID, an unemployment rate which keeps improving even though, by every other account, the labor market is doing no such thing. 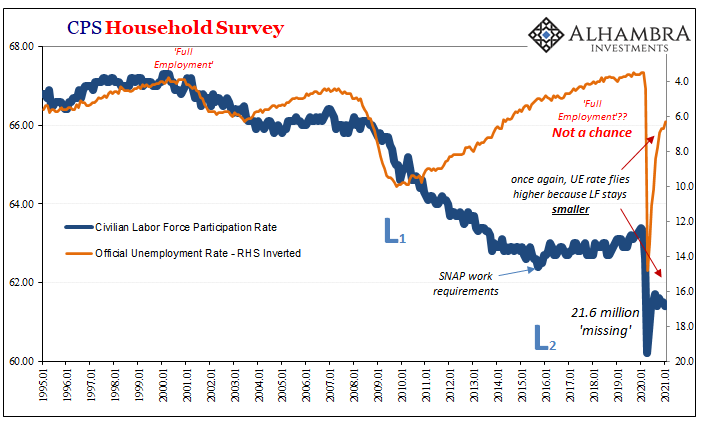 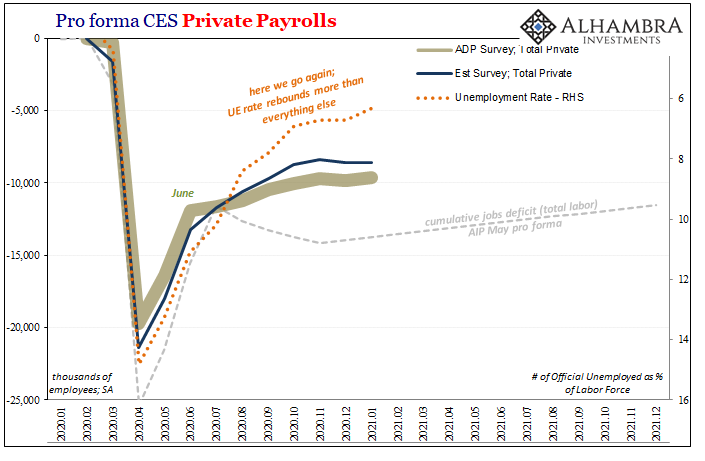 This isn’t to say the economy is in re-recession, but at this point that’s splitting hairs; everyone already got hit with recession, remain stuck fast within it, so the issue is getting ourselves out of it before long run damage, substantial, harmful, and irreversible loss to potential, is done. That’s where the time factor comes in.

And it’s not a new one – at least in 2021. When the horrifying prospect of significant long-term employment came up in 2010, 2011, persisting into 2012 and beyond, this had been an entirely new phenomenon. Ben Bernanke said QE was working, though he had to repeat the thing four times, the US, the Fed’s models claimed, was always just on the cusp of full recovery. 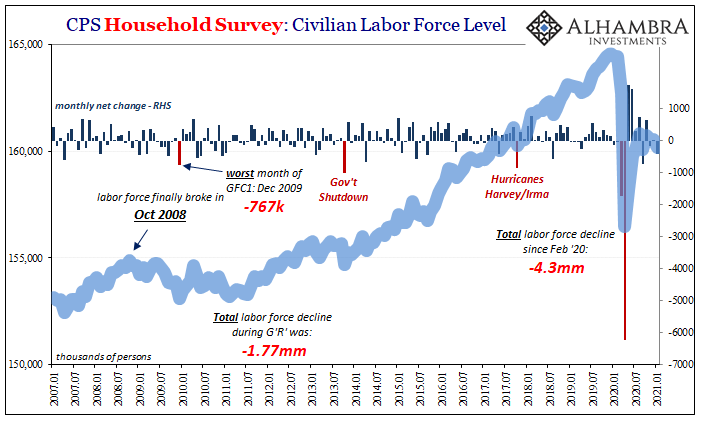 While not said much publicly, even Federal Reserve-underwritten scholarship was clear as to why this serious structural change had taken place (from 2013):

Recent research shows evidence of a modest increase in U.S. structural unemployment since the recession (see, for example, Daly et al. 2012, Elsby et al. 2011). However, this research also suggests that the primary explanation for historically high long-term unemployment is the persistent weakness in overall economic activity and demand for labor.

These two things become self-reinforcing and form one prong of the continuous deflationary anchor; though the R* crowd leaves out the first half of the process. In other words, skills erode, bad habits develop (leading to drug abuse and suicide), increasing lack of risk-taking, etc., which R* immediately blames on lazy former American workers when their own studies show such “laziness” came about first because the economy wasn’t nearly recovering enough to bring them right back into the fold as it had every other time during the six and a half decades before 2007 of the post-war, offshore dollar-expansion era.

The labor market didn’t spoil; it was left to rot by the ineffectiveness of policy responses to cure the underlying, unexamined issue which had actually broken the trend (permanent shock).

“Something” was very different about specifically 2008; a shrinking labor force was a new “thing” which began, poignantly, in October of that same year. If only we could figure out what was profound about that particular month. After all, Ben Bernanke was a hero and saved the world (and millions of jobs), so it must’ve been something else (sorry for the heavy sarcasm).

And now, as the months pass, the increasing certainty that it’s happening again. 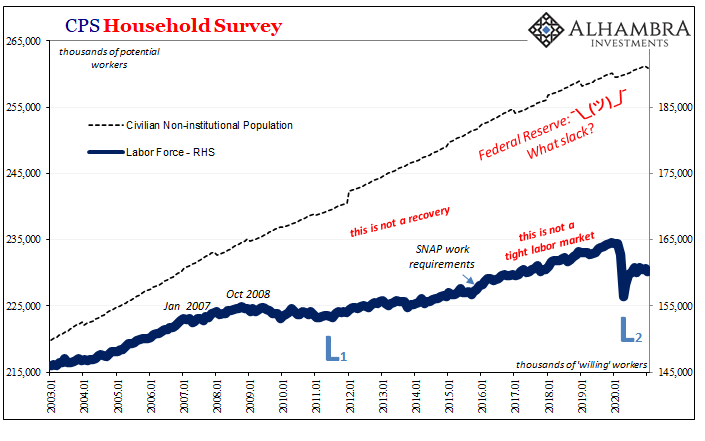 One last thing to keep in mind is that while this a-historical structural unemployment arose and kept going a decade ago, it was supposedly “fixed” time and time again by what we were all told was going to be massive, unbelievably powerful fiscal and monetary “stimulus.” When it wasn’t fixed, they blamed us.

Bigger numbers today, sure, but here we are once again in 2021 with what’s being claimed as massive, unbelievably powerful fiscal and monetary “stimulus” offered a second time following 2020’s massive, unbelievably powerful “stimulus” which, by the American worker, left us with the same structural employment problems initially delivered by October 2008’s drastic shock.

It was supposed to have been easy; turn the economy off, turn it right back on. Beginning 2021, we already know that wasn’t the case. Is it because ongoing COVID, itself a one-off shock meaning the pandemic will eventually run its course? Maybe the end of it this year will bring everything back. Or, since we more and more see the pattern repeating, is the “bring everything back” function of the post-2008 economy still broken? I’d say time will tell, and it will, but time is the problem.