Yet Another Reminder: Listen To Xi Spell It All Out

Yet Another Reminder: Listen To Xi Spell It All Out

I keep saying to take them at their word. For years now, China’s top Communists have been upfront and honest in a way that compared to what goes on in Western nominally-free democracies would be refreshing. Don’t get me wrong; this is no way implies, nor do I claim, that authoritarian thuggishness can be superior. Rather, this is the small(ish) beneficial byproduct of having no real opposition – you can speak the truth because you’ll savage anyone who dares criticize it.

The mistake, the confusion, it all stems from a misunderstanding of a single phrase: Socialism with Chinese Characteristics. Derived from Mao Zedong, it took on new properties – and eventual earnestness – instead under Deng Xiaoping. The former cultish leader had thoroughly screwed up China, dooming to death and torture tens of millions throughout his regrettably lengthy tenure.

For Communism to survive in that place, Deng Xiaoping would have to start backward first (from the Marxist perspective; going from Revolution to capitalism was a step in the wrong direction). Deng realized that in order to save it, they’d have to Westernize it (just as Lenin had originally tried).

Half-hearted and bungled throughout the late seventies and eighties, rising tensions between the holdover Maoist hardliners and the reformers (who, don’t kid yourself, might have seemed “softer” if only by comparison to the stewards of the Tiananmen Square Massacre) led to deep division only settled in the early nineties when, to each Communist’s horror, their northern neighbor, the Mother State, imploded.

If China’s Communist Revolution hoped to survive, it would have to go all the way – on the economy. Embrace the wealth and technology that only a capitalist system could invent and then multiply. And, of course, stealing, pilfering, and thieving as much as possible where possible; that’s the part of Trotsky they all seem to agree on.

Unlike the Russians, though, the Chinese would keep a tighter political grip while this happened. That’s the lesson they ultimately learned; more wealth first, and even more authoritarian to achieve it

Western politicians, in particular, misread this as some committed reform agenda whereby, in Tiananmen’s aftermath, the Communists were seeking international absolution by joining the neoliberal approach of most everywhere else around the world. The immediate fruits of Deng’s Southern Tour only made this mistake appear more plausible.

Becoming more capitalist was instead a desperate exigency; necessary only to keep China from swallowing the same Soviet fate. These were not ideologically friendly reformers moving the Chinese state on its path toward Western ideas of free markets and freedom in general; on the contrary, they were opportunists who would harness and ride the wave of eurodollar-inspired, eurodollar-financed globalization to create a cushion of national wealth which would provide the necessary buffer to prevent China repeating the Russian demise at any point in the future.

Implicitly, Socialism with Chinese Characteristics had always meant ditching this post-eighties version of it whenever the timing suited. Around 2012-13, just as Xi Jinping was unexpectedly taking hold, the Communists began to seriously suspect the timing sure was about to suit another change. Ben Bernanke eventually admitted to false dawns the Chinese had already surmised were permanent changes. 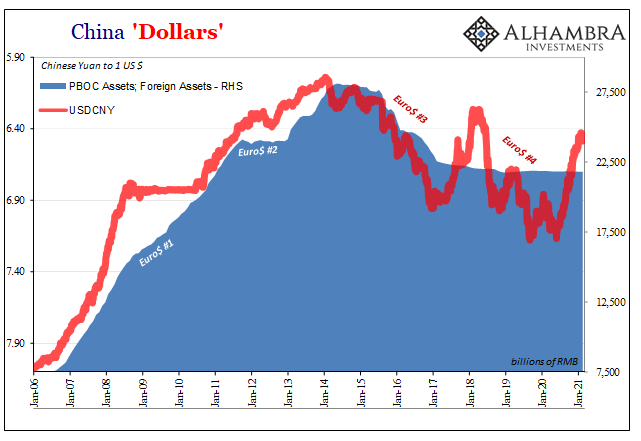 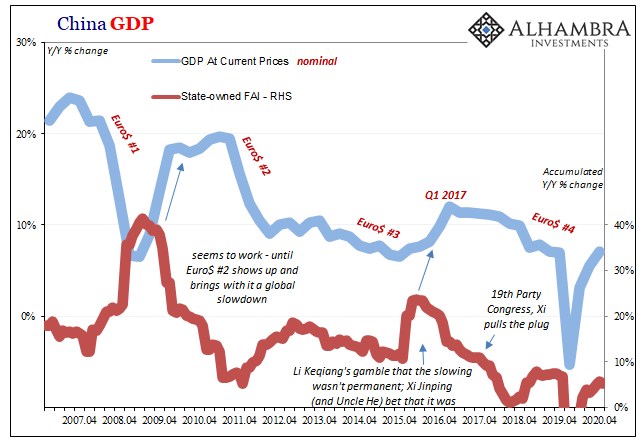 Apparently, divisions and politics again, it wasn’t until after 2016’s final Western experimentation (Keynesianism) that finally settled the matter once and for all. While the world celebrated “globally synchronized growth” in 2017, Xi’s minions were already hard at work rearranging Chinese socialism in light of how they all saw it had been nothing more than a hollow slogan.

And then explicitly, outright telling the world about it (19th Party Congress).

Xi, installing himself as unchallenged and unchallengeable, could and can be so honest. Western politicians – and the central bankers whispering in their ears – still need public support and so are unwilling to say to the public anything like reality (hey, this sucker’s about to really start booming!)

As the global system fell off yet again in 2018, Xi was proved ahead of the curve on “globally synchronized growth”, Western Economists and officials kept waiting for the Chinese “stimulus” response presuming, incorrectly, that Socialism with Chinese Characteristics at that time still had meant Deng’s version.

It didn’t; it had been comprehensively replaced by Xi’s austere Plan B. And this was based not on China’s issues alone, but rather how those issues derived from a global economy that never once lived up to its post-2008 “stimulus”-laden promises. Rather than simply a rebuke to globally synchronized growth, China entire political existence has been staked on the candid view there was then, had been before, and will only be no global growth to speak of.

If Western Economists can’t imagine Socialism with Chinese Characteristics under a new regime, imagine their inability to process these specific reasons for such drastic change (wait, what do you mean it isn’t booming over here nor will it?)

Yet, the idea lingers; much, if not most, of the post-COVID economic recovery has been pegged upon China! To that end, Western estimates had been crafted in keeping with Deng not Xi; that huge doses of textbook measures were about to push the Chinese economy up to at least 8% if not 9%, with growing whispers of 2021 back into the double digits real GDP.

With that, the rest of the world could look forward without too much apprehension.

No. I’m serious; even if you don’t like why, at least listen to what these people keep consistently telling you:

China has set growth target of over 6% for 2021, Chinese Premier Li Keqiang announced Friday at an annual parliamentary meeting — the country’s most important political event of the year.

Such growth would come off a low base.

Yeah, no kidding; off a low base to “over” 6%, a hedge on already uninspiring. In other words, the Chinese, yet again, are saying that there’s not much economic growth coming; in truth, far, far less than anyone seems prepared to accept. Think about 6% following a year when – at best, we know what China does for real GDP – the expansion (likely contraction) had dropped to just 2.3% officially. 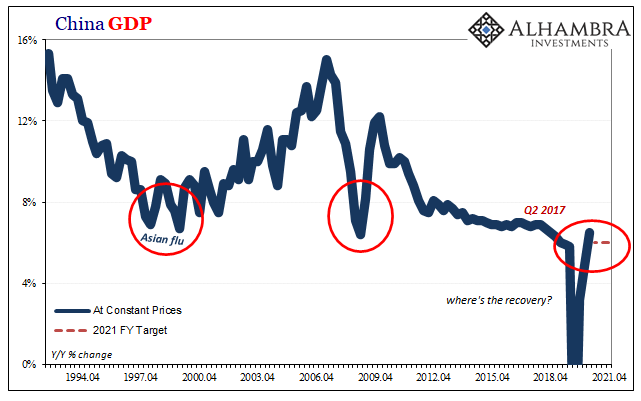 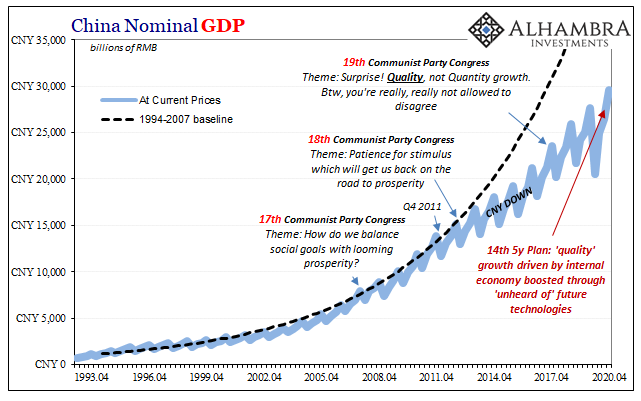 That means 2020 and 2021 together are already booked as a prolonged two-year period with the worst possible numbers since Deng’s time. And it won’t even be close.

Furthermore, China is fine with this; or, specifically, the Communists are. They’ve already installed their social credit system of control and have ordered up military-grade levels of secret police (and tactics now tested in places like Hong Kong).

It’s everyone else who will “unexpectedly” suffer when the global recovery predictably falters yet again; the questioning turns more toward “when.” 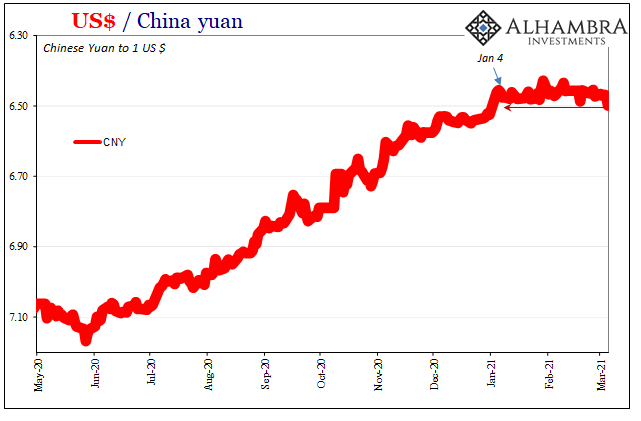 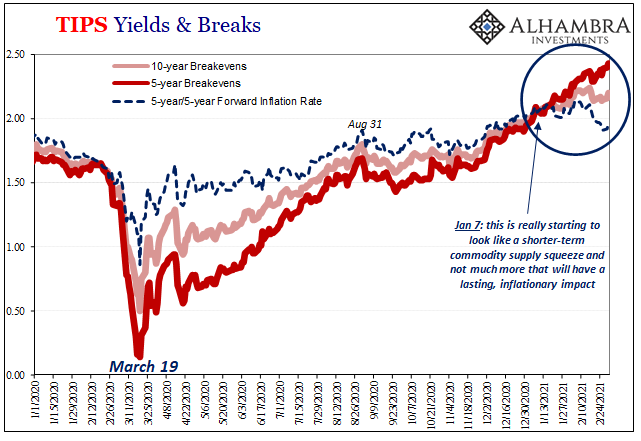 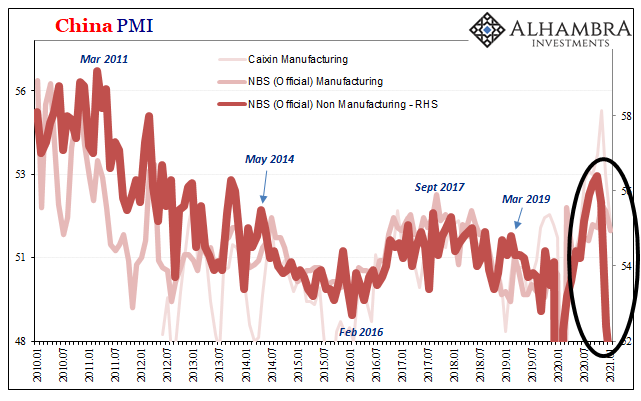 The global economy had long ago come to depend upon China’s embrace of globalization for its marginal growth; and the “dollars” necessary for everyone to participate in it. In other words, China built itself up becoming the factory to the West, throwing off increased demand (especially for raw materials) to do so which transmitted the process of globalization throughout the rest of the world.

Xi keeps saying how China ain’t doing that anymore; everyone for themselves.

Given this news, and how over here it is so “unexpected” because of the continuing translation error, you might understand better how markets – dollar vs. CNY in particular – might interpret things differently since, say, early January when the Chinese economy really seemed to fall off and now Communist officials are stating, very clearly, yeah, we know, and we aren’t going to do much about it (“no sharp turns” policy).

You might even consider this heightening global risks, a particular phrase which, more than anything, best describes Xi’s Socialism with Chinese Characteristics. You really, really don’t have to take my word for it.