There’s an old saying on Wall Street that one should “buy the rumor, sell the news”, a pithy way to express the efficient market theorem. By the time an event arrives, whatever it may be, the market will have fully digested the news and incorporated it into current prices. And then the market will move on to anticipating the next event, large or small. What prompts this review of Wall Street folk wisdom is the most recent employment report.

The BLS reported Friday, with most markets closed, that the US added nearly 1,000,000 jobs in March, a number well above the supposed consensus of 675,000 jobs. 157,000 jobs were added to previous months via revision. It was what the market has been looking for, hoping for, the arrival – finally! – of the end-of-the-virus-boom. What is most interesting about this report was the market reaction on a day when most markets were closed. The one market that was open when the report was released was the bond market which promptly did, well, not much. Even a booming jobs report that showed job growth across multiple sectors of the economy, one that showed a rise in the participation rate and a fall in the unemployment rate, didn’t move bonds much at all. Yields Friday ended well below the peak of earlier in the week. Buy the rumor, sell the news.

Bond yields have been rising steadily for 8 months so the direction of rates does indicate that the economic condition is improving. But the rate of change has been fairly subdued and the levels are not what we would expect if a boom were coming. What does a 1.7% 10-year Treasury note yield really mean? One thing I’m pretty sure it doesn’t mean is that the Fed is holding down yields. They’re a big player but if the market decides to take yields higher, higher they will go. The fact that yields are at these low levels isn’t artificial and means, I think, exactly what it appears to mean. The bond market isn’t expecting a boom. In fact, I’d say that right now bond yields reflect growth expectations that are no better – and maybe quite a bit worse – than what prevailed before the virus hit. 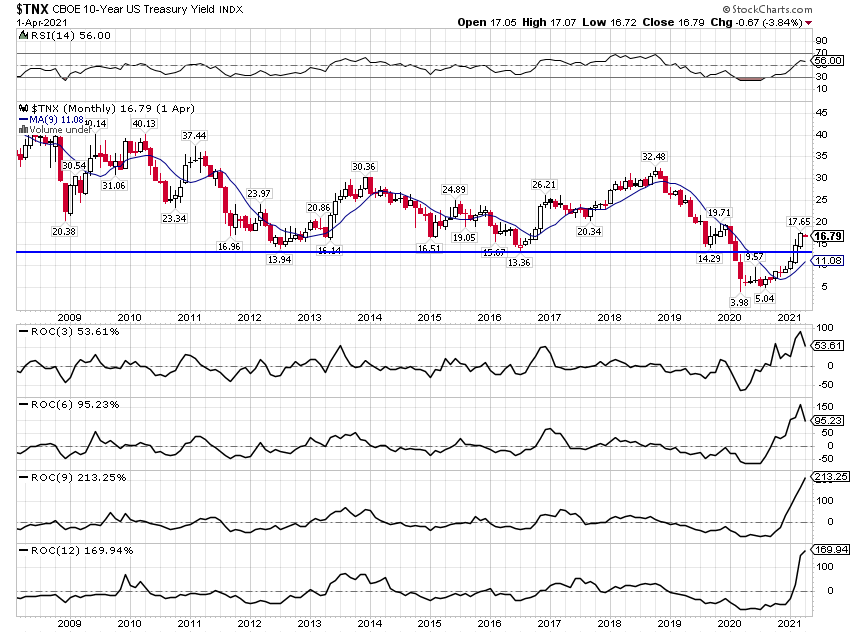 I’d also point out that the 3 and 6-month rates of change for the 10-year yield have peaked. If bonds don’t sell off aggressively on the employment news this week, a bond rally is probably near, if not starting right now. Again, buy the rumor, sell the news. At market tops and bottoms, news doesn’t move markets in the expected direction.

The situation is even worse if you look at real yields. Real interest rates are, to me, the sine qua non of economic indicators. I don’t care what every other indicator or report says, real yields kind of have the final say on growth. And right now they are not saying much good. The 10-year TIPS yield is sitting at a negative 66 basis points and about the only thing you need to know about future real growth is that this number is still negative. 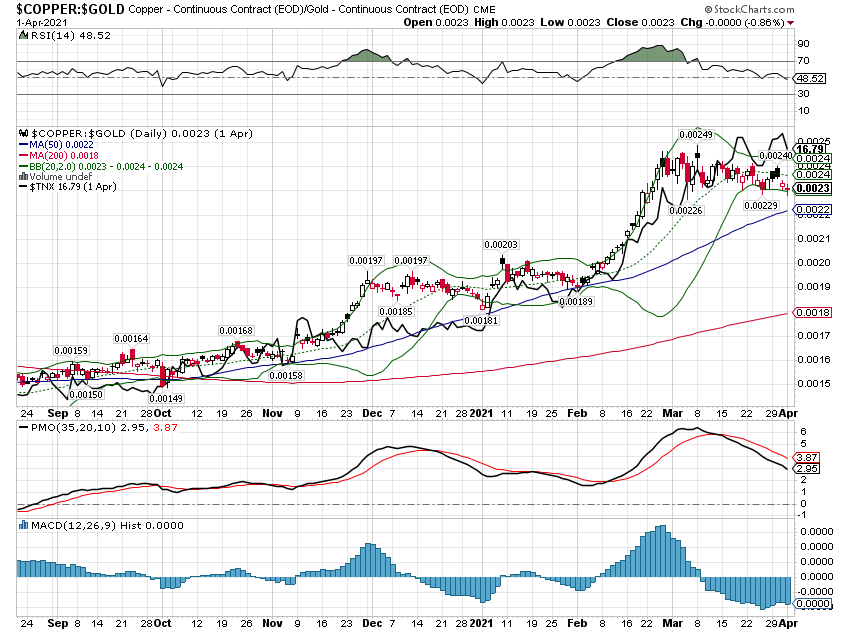 It may be that bond yields will just keep rising and the copper/gold ratio turns higher soon too. If that is the case, then the market will be factoring in a little more of the boom narrative. But I think the real question is whether whatever surge we get is the start of something long-term or just a brief burst of activity that fades away and leaves us back where we started – or worse. Yields aren’t even close to where they would have to be to justify a higher structural growth rate view. The 10-year TIPS yield would need to rise 225 basis points from here just to get back to the low end of the range that existed in the mid-00s. The nominal 10-year would have to get to the 4 to 4.5% range. I’m not saying it can’t happen but it is a big hill to climb.

One more thing to consider is that the Bloomberg Barclay’s Treasury index just had its worst quarter since 1980, down over 4% in Q1. It was also the second straight negative quarter, something that is fairly rare. Three down quarters in a row is even more rare, having happened only twice since the early 70s (1979 and 1994). Expecting higher rates and lower bond prices is the consensus trade right now and has been for months. Which reminds me of another old Wall Street saying I heard a long time ago – the market will ultimately act in whatever way frustrates the maximum number of people. A rally in bonds right now would certainly do the trick.

The employment report was better than expected last week but as I’ve said often, you need some context with these numbers. We are still over 8 million jobs short of where we were prior to COVID. Over 3 million of those lost jobs were in leisure and hospitality, a category that added 280,000 jobs in the latest report. That is good news of course, but it also shows the size of the problem. We’d need a full year of adding jobs at that pace to get back the jobs lost in 2020. And I don’t think anyone has any clue if that will happen. The economy is changing, due to the virus, in permanent ways and there is no guarantee that all those jobs will come back at all. I spoke to a local restaurant owner just last week who told me that he’d never go back to his previous number of employees.

The rest of the reports released last week were generally better than expected with the exception of pending home sales. The housing market is having some difficulty right now, some of it related to a lack of inventory, and some of it due to mortgage rates. But most of it seems to be a function of prices which Case-Shiller and FHFA both reported last week are up over 11% year-over-year. I have to say, seeing house prices rise rapidly and the official inflation gauges do little gives me a powerful sense of deja vu. Can’t imagine why.

One last report from last week which merits a mention is the auto sales report which showed light vehicle sales all the way back to 17.7 million, which is about as high as that number has gotten in the last two cycles. It may not be a boom but it isn’t bad news either. 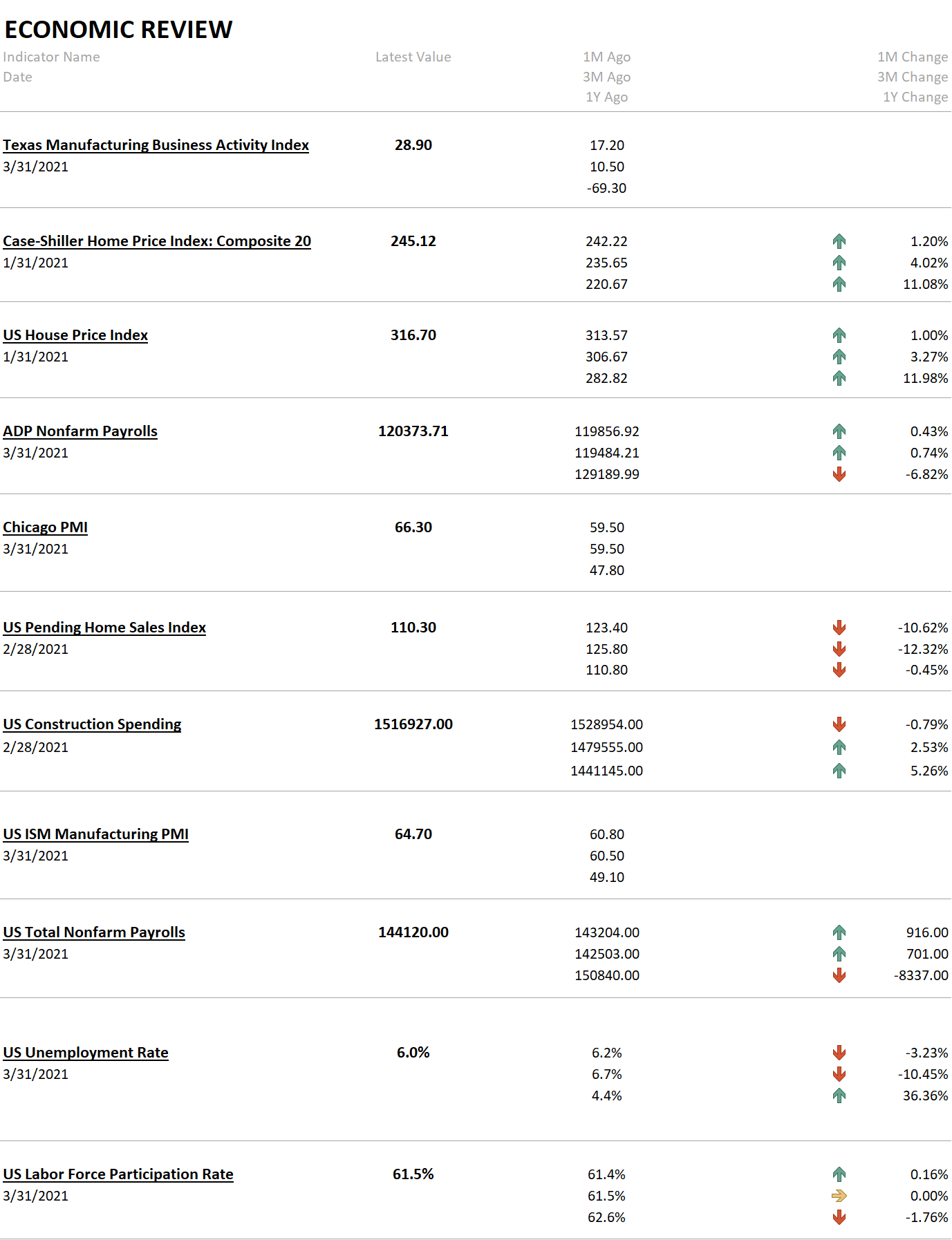 Next week’s slate of reports is pretty thin but we do get the JOLTS report which could give us some more insight on the labor market. We also get wholesale inventory numbers which might be interesting. Inventories are quite lean right now and we would usually expect more production in the immediate future to rebuild them. But the post-virus period seems likely to see a change in consumption patterns with services possibly surging (do you know anyone who isn’t itching to take a trip or go to a ballgame or concert or at least out to dinner?) while goods purchases fall off. It may be that wholesalers are looking forward to that period and don’t feel a need to rebuild inventories. Just a thought. 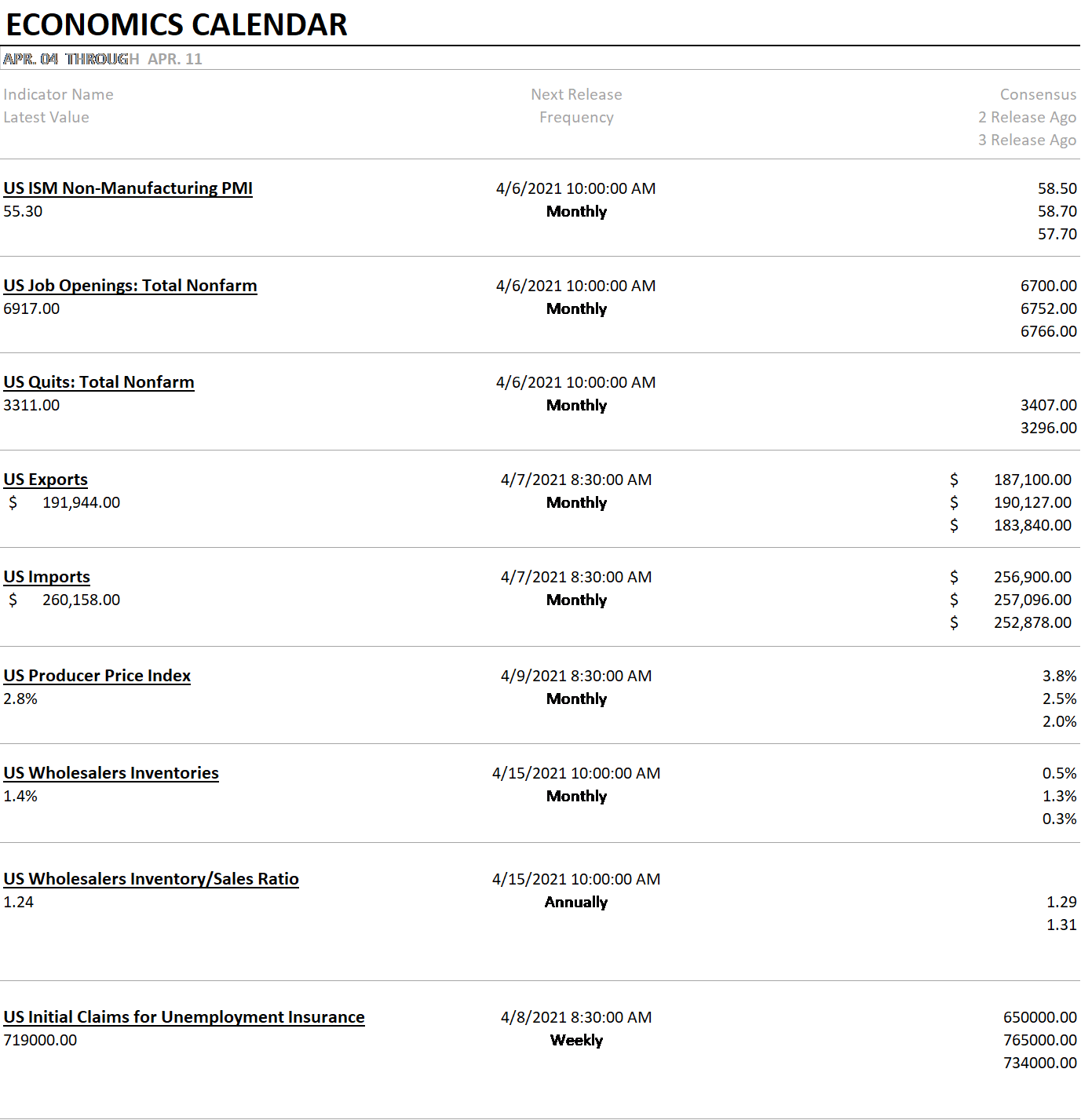 Real estate had another good week and REITs are now at their highs since the onset of the virus. REITs have also outperformed the S&P 500  YTD with all the outperformance coming in the last month. Small caps also had a good week after a minor correction the last few weeks. Commodities also turned in a positive week and are still the leaders YTD, followed closely by small caps. International markets were also higher, with the exception of Japan, but are still lagging behind US stocks YTD and over the last year.

Growth played catch up last week, but value is still outperforming by a considerable margin YTD. This is looking more and more like a durable shift. 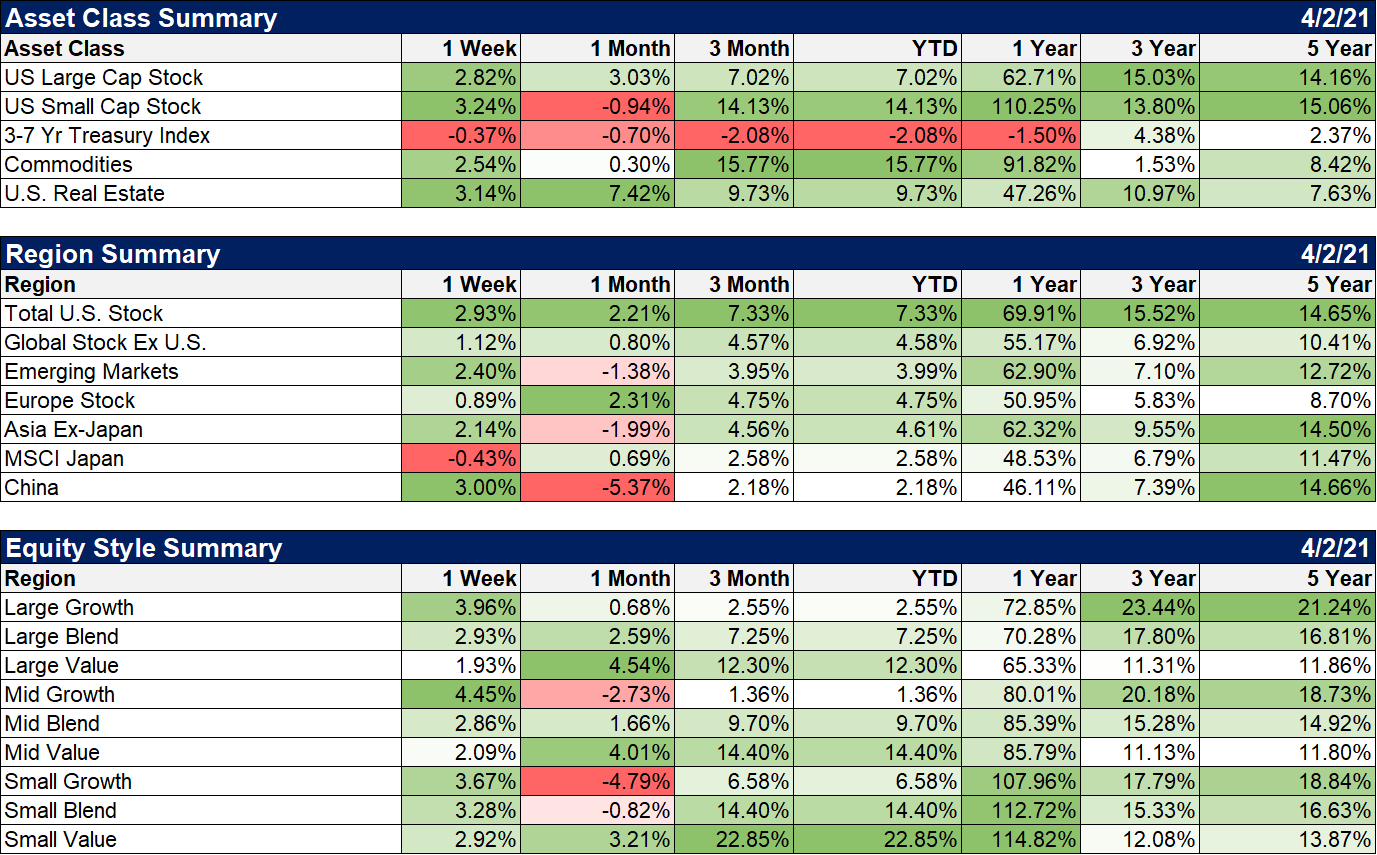 Technology was the leading sector last week and is now positive on the year. Financials and energy continue to lead the pack YTD. 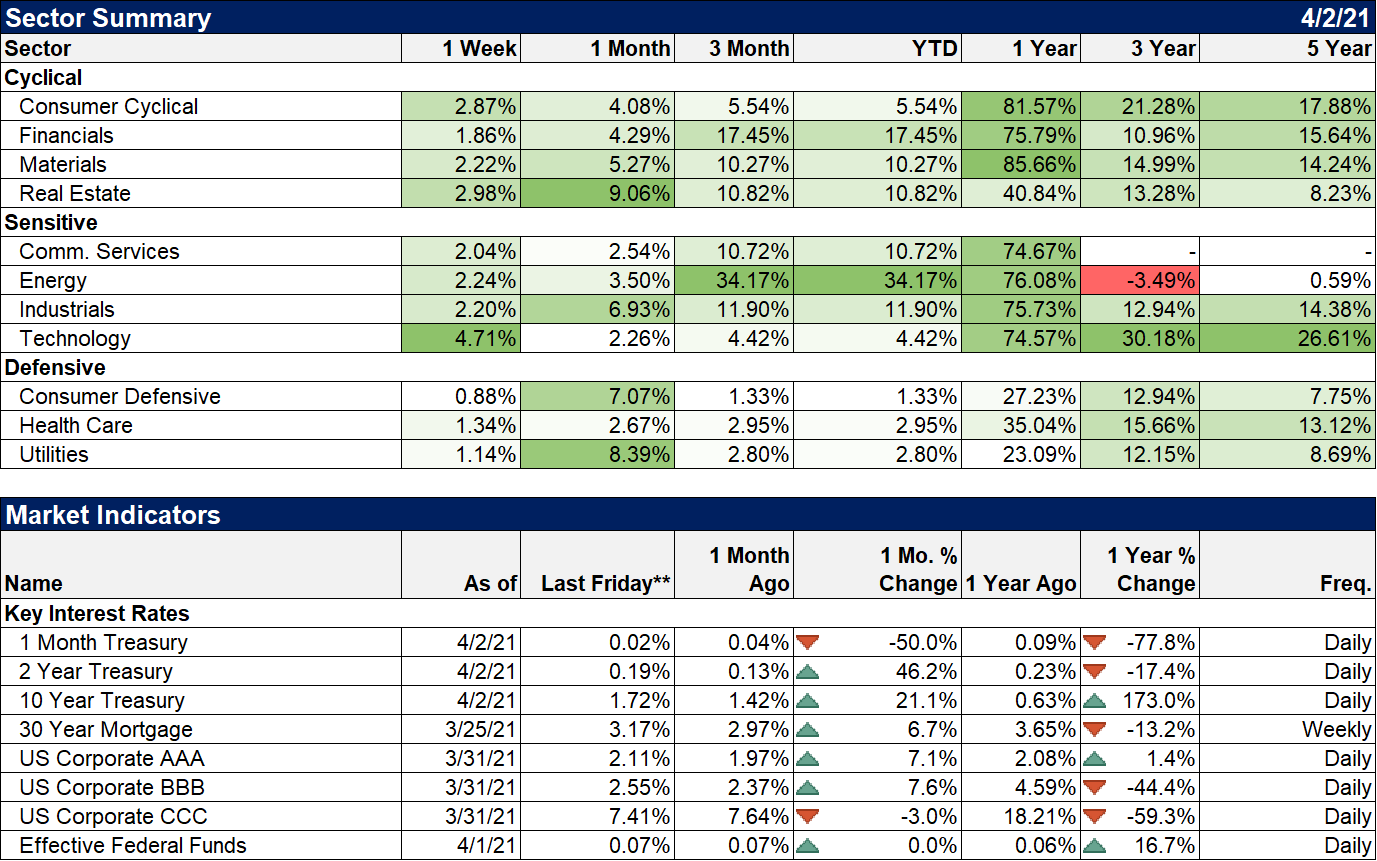 The big trends in the markets haven’t changed. Rates and stocks are still rising, anticipating better growth. That is probably generally, directionally correct. But at some point markets are going to have to start thinking about the post post virus period and what that means for growth. The Biden administration released its latest spending plan last week, putatively an infrastructure bill that seemed to be fairly light on actually building things. They also floated some vague gesture toward paying for some of it through tax hikes that exactly no one expects to get through the Senate.

By the time any boom arrives the market will already be looking ahead to the next big thing. That thing might be a clearer understanding of how taxes affect corporate earnings and what that might mean for stock prices. Don’t be surprised if we get the boom and stock prices don’t react favorably. The correlation between the current economy and the stock market is basically nil. For now, I think you can continue to buy the rumor but it probably won’t be long before we start thinking about selling the news.